Madison teacher goes viral for gravestone cleanings hobby, sharing the stories of those buried and no longer forgotten 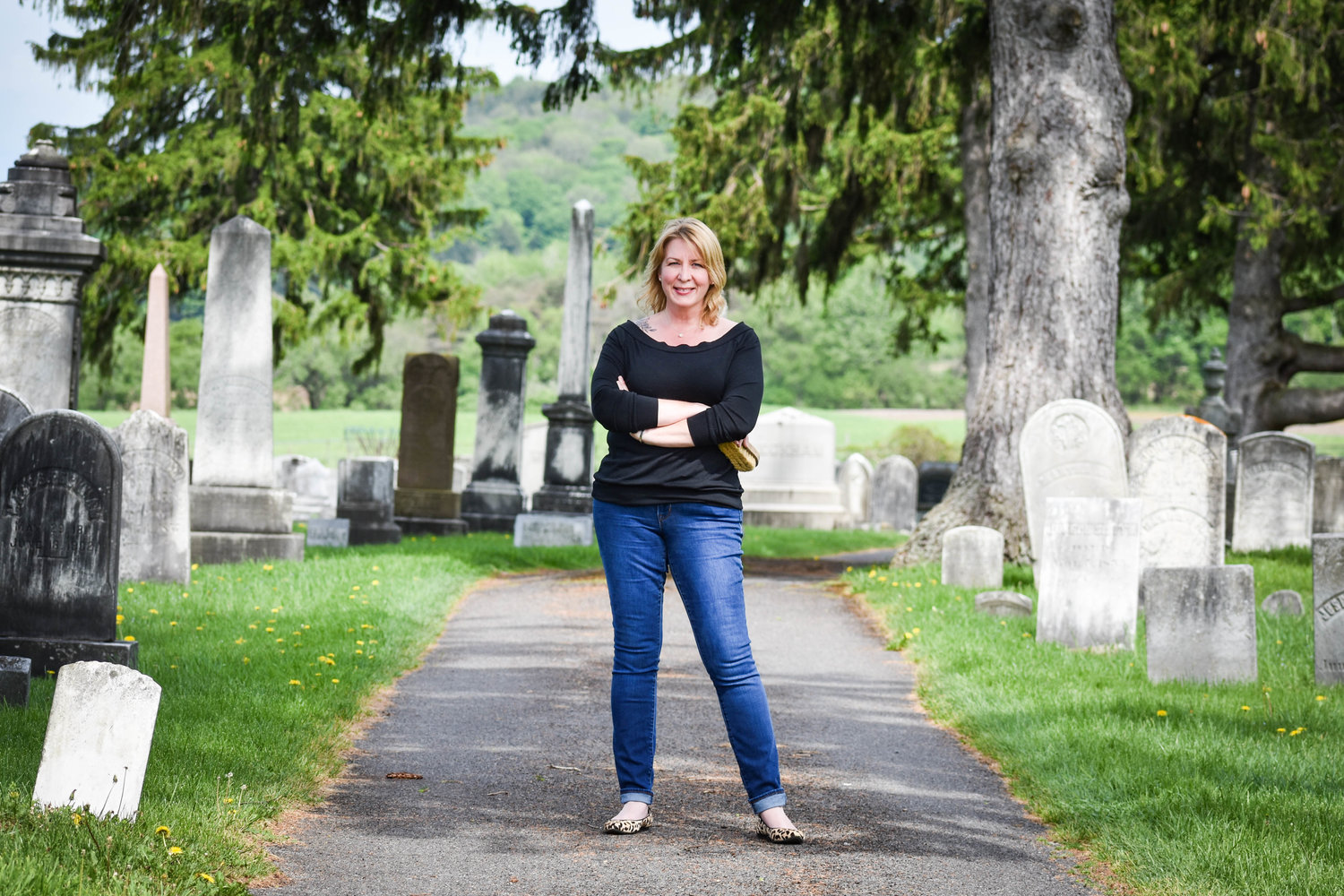 Madison Village Cemetery is one of many cemeteries in CNY that Megan Barnes has visited to clean up gravestones.
(Sentinel photo by Carly Stone) 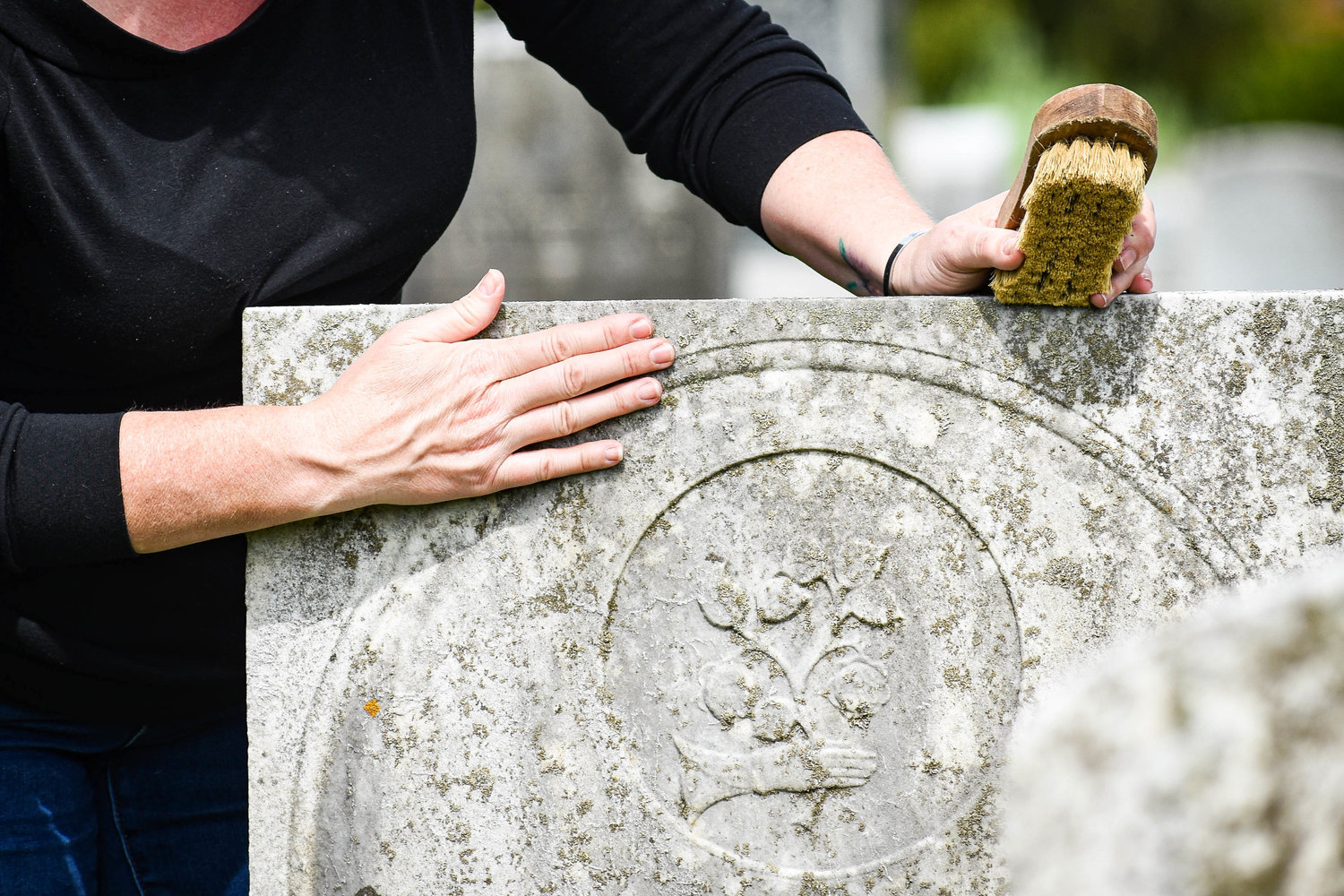 Megan Barnes inspects a gravestone that has not yet been cleaned at Madison Village Cemetery. The local earth science teacher has gained over 350k followers on TikTok by posting videos of her cleaning gravestones and sharing the stories of the deceased.
(Sentinel photo by Carly Stone) 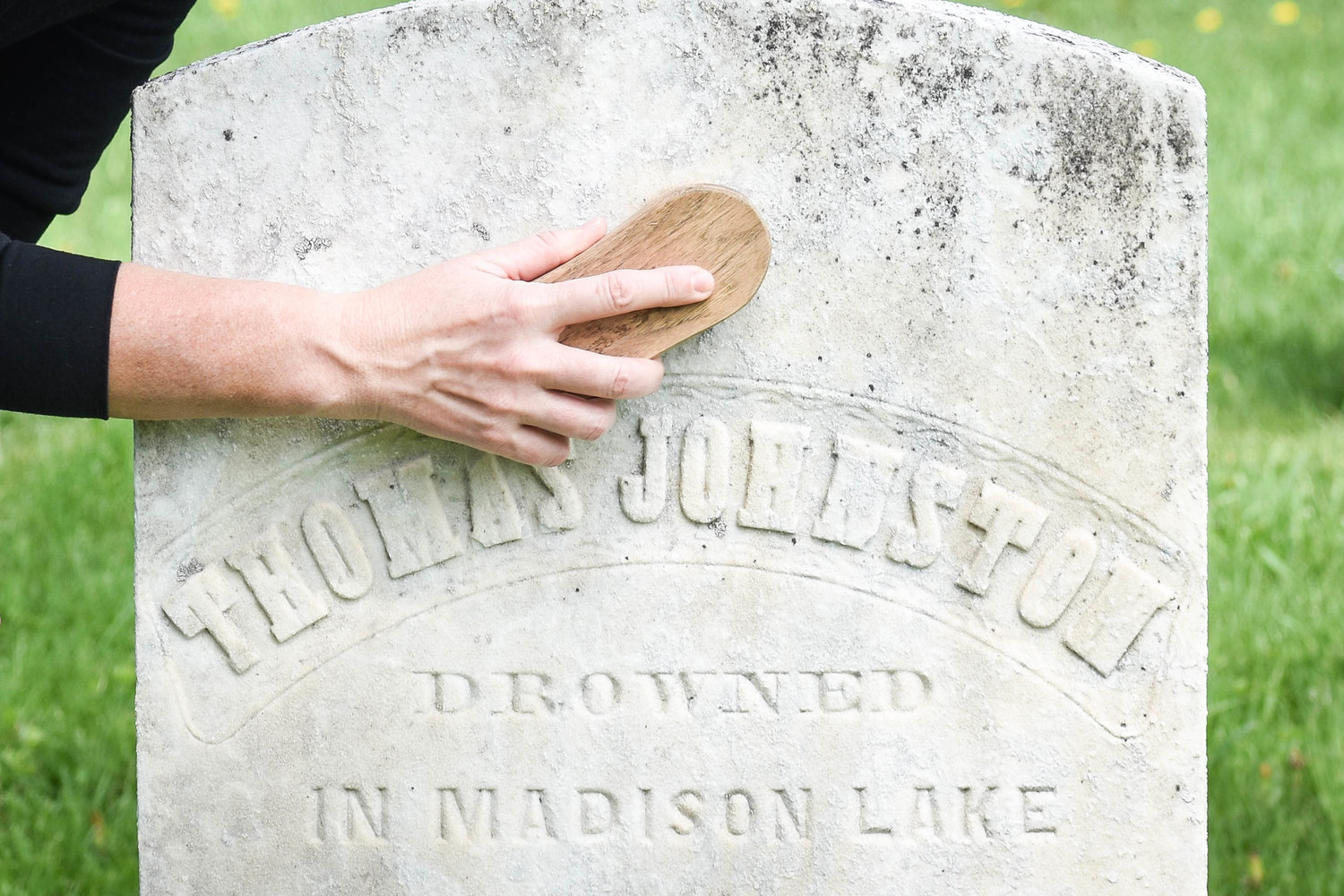 TikToker Megan Barnes brushes off a headstone she previously cleaned some time ago in Madison Village Cemetery. It takes weeks for the stone’s appearance to fully lighten to this degree after it has been cleaned with D/2 Biological Solution, Barnes explained. This is Thomas Johnston’s gravestone. Beneath it reads, “drowned in Madison Lake.”
(Sentinel photo by Carly Stone) 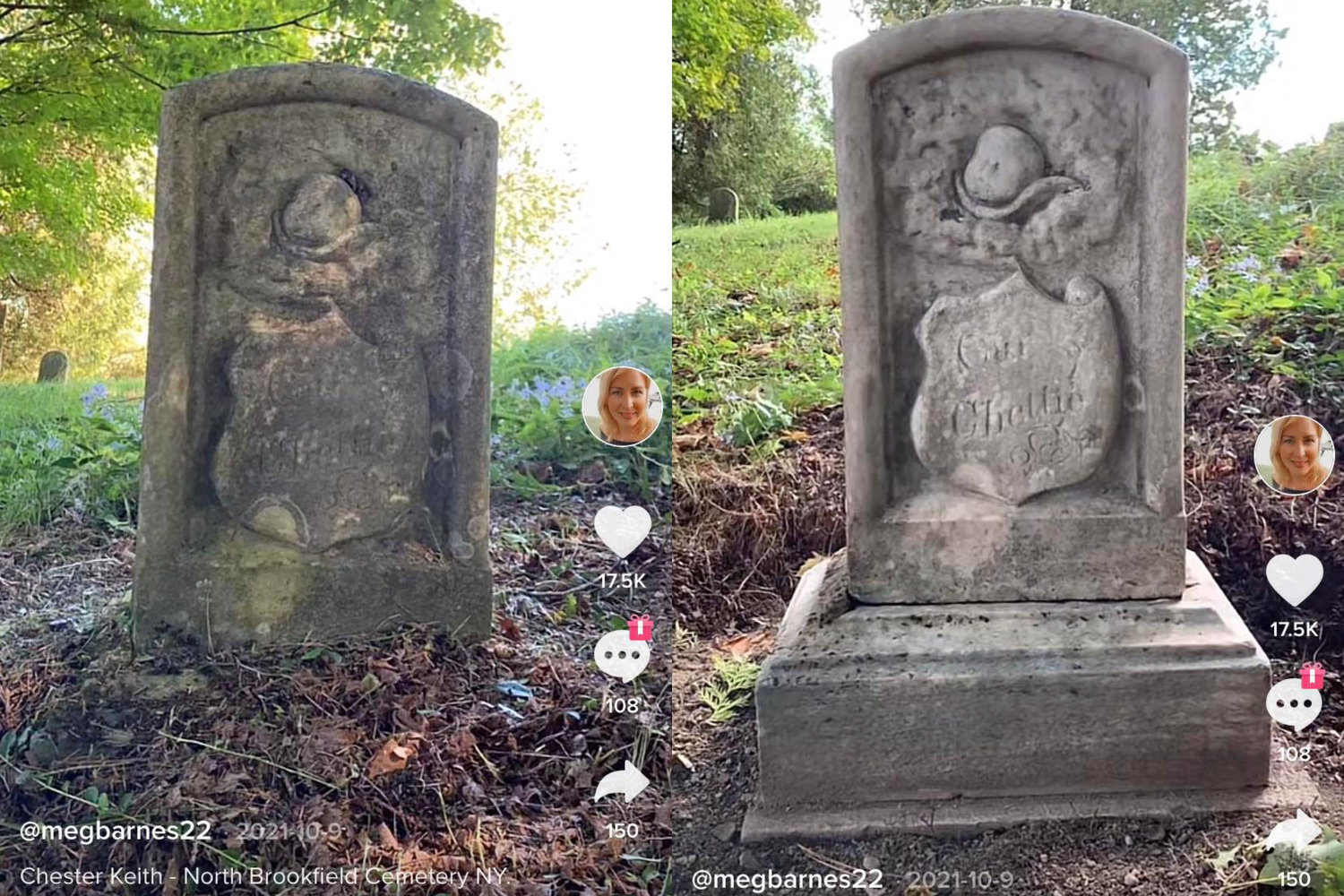 Pictured is the headstone of Chester Keith, located at North Brookfield Cemetery. On the left is before Megan Barnes cleaned the stone; on the right is after.
screenshots from @megbarnes22 TikTok video
Previous Next
Posted Saturday, May 28, 2022 8:30 am
Carly Stone
Staff writer
email / twitter

MADISON — It’s not often that tiny towns in Central New York get much recognition, but thanks to one person and their interesting hobby, millions of people have come to learn part of the area’s history.

Megan Barnes, an Earth Science teacher at Madison Central School District, had no intention of going viral on social media when she started posting videos of her fixing up headstones in surrounding cemeteries and sharing the deceased persons’ stories on TikTok. Her most watched video now has over 20 million views.

She picked up the hobby less than a year ago after finding an abandoned cemetery near her home in Hamilton. Those memorialized at this plot were apparently long forgotten, Barnes said, which didn’t sit well with her. “So I asked permission to clean it up,” she said.

She got to work fixing up the stones by unearthing the buried ones, straightening them, and giving them a good scrubbing. All this after doing research on the best tools, chemicals, and methods to use, Barnes assured, which include wooden skewers, a variety of brushes, and a mild soap called D/2 Biological Solution, the same stuff that has been used at Arlington National Cemetery, according to the product’s website.

Initially, Barnes shared her new pastime with friends and family on Facebook, only. Soon others were asking for her services at various graves.

“One day when I was on TikTok, I found another girl who does this, and she was cleaning them and she was telling the story of the person’s life, and I thought, well that’s kind of cool. I’m going to look up information on my people,” she shared.

Piecing together lives lived over a century ago is possible for the hobbyist thanks to ancestry.com — which may contain primary resources such as censuses, draft cards, marriage licenses, wills, and birth certificates — findagrave.com, local town halls, local history books, and fultonhistory.com, she shared.

The initial few videos documenting her work and the stories of the deceased on her TikTok account, @megbarnes22, were at first, set to private. When Barnes, a 1995 graduate of Waterville High School, decided to go public, she grew a following exponentially in a matter of months. In April, she had around 70 followers. The content creator now gains anywhere between 5-10,000 new followers a day, she said. Her total following currently stands at around 350k.

“It’s been so overwhelming. Now I’m getting so many comments and likes and I can’t even reply to people anymore because it’s just, it would take me all day,” the Madison native said of her newfound fame.

Her pasttime has lead her to revitalize nearly 100 headstones so far, Barnes reported. “To think that somebody sat there and hand-carved all of those details [on the stones]. I’m not knocking the ones from today, but those are done by machines. And to think that somebody put in the quality time, and it’s neat to see, I mean, I think it’s neat, to see mistakes that they made. It was kind of cool. The craftsmanship is just amazing,” Barnes reflected.

She’s worked at both public and private cemeteries, around 10 total, in the CNY area. The majority of her work is volunteer. Barnes has recieved some donations from individuals to support her work, and TikTok pays her a set amount depending on video views.

Her most-watched video centers around the headstone and story of Clayton Simmons, buried at North Brookfield Cemetery. The information available about him “wasn’t all that nice,” Barnes said in her video. He had abused horses, gotten arrested, and tried to avoid being drafted into WW1, according to Barnes’ research. These discoveries were made after the TikToker had already cleaned his headstone; cleaning first and learning second is typically the sequence she follows, she explained.

Deciding to tell his story took some thought; she didn’t want to offend anyone who knew him or was related to him, she said. But, his stone was the only military-issued stone she’d ever cleaned, and she learned some interesting facts after finding a penny laid on top of it. So she decided to share.

Subsequently, Simmons’ story drew a lot of controversy in the video’s comment section over whether or not his grave should be respected. Barnes believed this could be one reason it got so many views.

Regardless of people’s personal beliefs, Barnes said she often feels the stress of dealing with headstones that may be either historically valuable and/or sentimenal to a family that is still around. “Damaging headstones is my worst nightmare,” she admitted.

“Headstones back then were a huge financial burden on the family, and I feel like they wouldn’t have wanted them to just disappear like this and be forgotten,” Barnes’ remarked of her hobby. “I know some people do [think] like that, they think they should just be returned to the earth. But I feel like most people don’t feel that way.”

What’s particularly fascinating about local cemeteries, Barnes noted, is that often the lives of those buried there are interwined. “It’s really interesting that, not only did these people spend most of at least their adult lives together, but they’re also spending their death together too. You don’t see that in big cemeteries.”

When it comes to how someone died, Barnes said that old newspapers — which are often resources for her research— were commonly very graphic in their descriptions. She has discovered some people who have drowned after their horse took their buggy under water, and one man who ate biscuits poisoned with horse medication.

Does Barnes have a favorite headstone with a story to tell? “I guess if I had to pick one... it would probably be Sheriff Jim Filckins. He was the sheriff that took out the Loomis gang.”

Despite the popularity of her videos, at the center of it all is a hobby that Barnes said she truly loves. “For me it’s super rewarding. It might sound silly, but I like to treat each headstone like I would somebody who’s in my own family.”

She continued, “I love that it’s a way of preserving these people’s memory. A lot of the stones that I’m cleaning, they were the original settlers of this area. They were the ones that designed these towns, built these towns, and that for me is really kind of awesome. I just think they deserve the respect for that.”