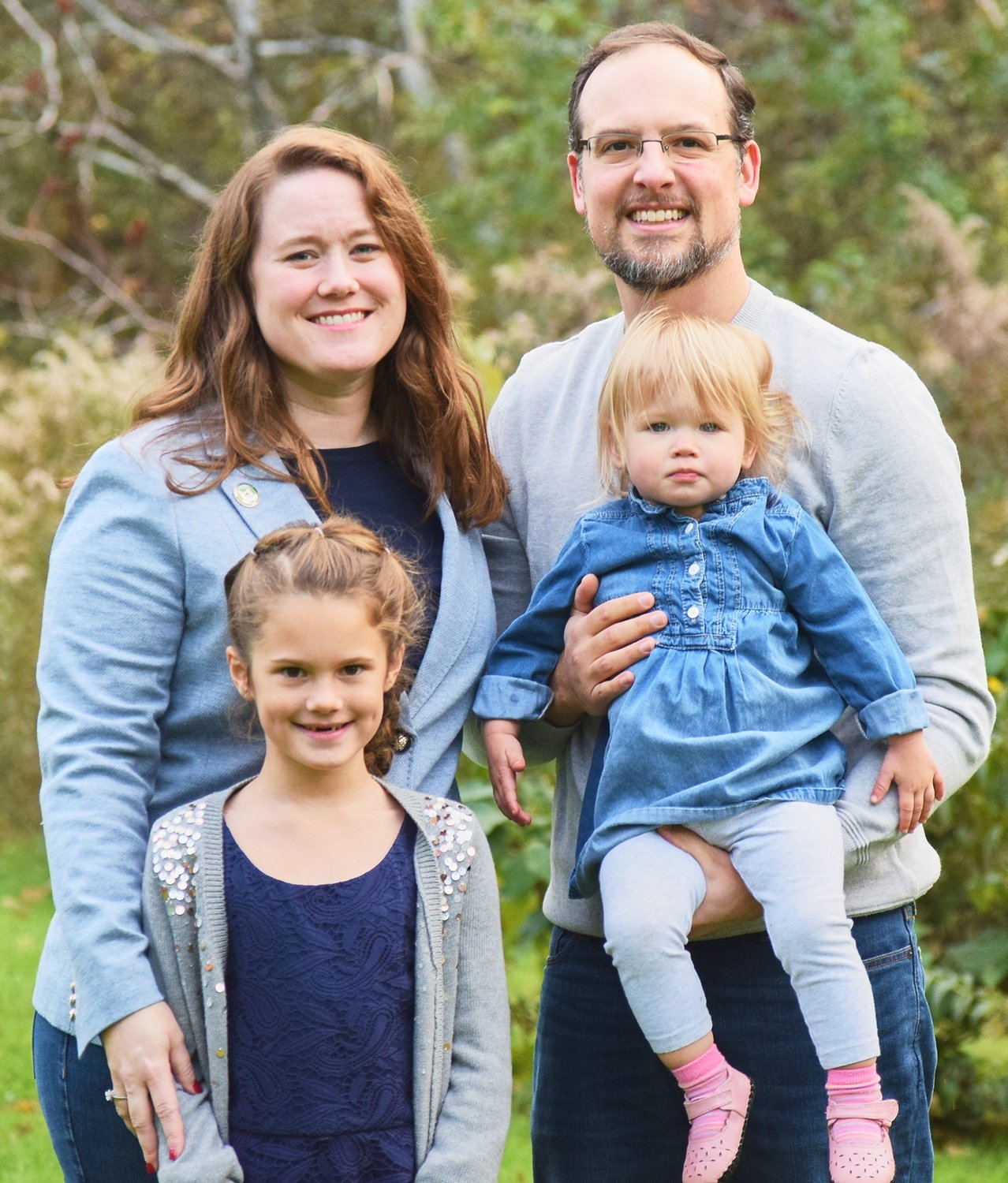 Rhonda Youngs is running for Madison County Judge on a write-in ballot and has received support from the Madison County Democrats, Republicans, and Conservatives. She is shown above with husband, Jim, and their two children.
(Photo submitted)

“I am not a perfect person and I accept responsibility for the events that occurred on the weekend of July 30. This situation has opened my eyes to the fact that I had an unhealthy relationship with alcohol. From the moment I was released from the hospital I have taken, and continue to take, steps to address my issue with alcohol. I immediately, and voluntarily, signed up for outpatient treatment. I also voluntarily joined a 12-step program which I regularly attend. The positive impact that has had on my health and my relationships has been extraordinary.”

“As it relates to the judicial race, I am the most qualified candidate,” he continued. “When the Republican and Conservative parties made their choice based on legal experience, qualifications and temperament, they chose me. All of those reasons still exist today. Unfortunately, there are those that have sought to use this incident to try to destroy me and my family for their own personal gain or their own agenda. I recognize I gave them that opportunity. This incident does not define me and it does not erase my life’s work. Good people make mistakes and I have been strengthened by the outpouring of support and compassion from so many across Madison County and beyond.”

However, the Madison County Republican and the Conservative committees had asked Moses to remove his name from the ballot. After he refused to do so, both parties rescinded their endorsements and backed Youngs’ write-in campaign.

County Republican Chairman Todd Rouse said in release that “... There was broad consensus among the Republican Committee that Brad Moses is unfit to serve as County Judge. We are thoroughly disappointed in his behavior and actions — both in terms of the life-threatening situation and his refusal to remove his name from the ballot. We are proudly backing Rhonda Youngs in a write-in campaign and will work our tails off from now through November 8th to ensure her election as Madison County Judge.”

County Conservative Chairman Chris Kendall said, “Rhonda Youngs is a person of character and integrity, which is exactly what we need in our new Madison County Judge. Brad Moses’s behavior is abhorrent and dishonorable in every way. He was already removed from his position as assistant district attorney. I cannot fathom he believes it is acceptable to take office as county judge. I’m imploring Conservatives, Republicans, Democrats and Independents to unite to ensure that Rhonda Youngs is elected this November.”

The Madison County Democratic Committee have voiced their endorsement for Youngs, saying “... some things are more important than party affiliation and the ethics and integrity of our court system is one of them.”

For the past six years, Youngs has worked as court attorney to Judge Patrick O’Sullivan. In this role, she works on County Court, Family Court, and Surrogate’s Court matters — researching and analyzing legal issues, drafting opinions and court orders, advising and assisting the judge during trials, conducting conferences with litigants to clarify issues to be resolved, and settling cases.

Additionally, Youngs was recently appointed as associate judge in Cazenovia.

Earlier in her career, Youngs worked as a private practice attorney in Cazenovia with Stokes Youngs PLLC and Mitchell Goris Stokes & O’Sullivan LLC for six years, where she handled all types of cases for clients throughout Upstate New York.

Before that, she began her career at the Hancock Estabrook firm in Syracuse.

A lifelong resident of upstate New York, Youngs lives in Cazenovia with her husband, Jim, and their two daughters.

“I’m honored to have the support of the Madison County Democrats, Republicans and Conservatives in my campaign for county judge,” said Youngs. “As I’ve gone door to door and talked with voters at public events, the enthusiasm and support I’ve received from voters across the entire political spectrum has been truly humbling. We’ll keep pushing hard for these final weeks leading up to Election Day to ensure integrity and fairness in County Court.”

Based on New York State election laws and regulations, Moses’s name cannot be removed from the ballot this late in the year, and all deadlines have passed for any other candidate’s name to be placed on the ballot.

This judgeship is on the ballot following the elevation of former Madison County Judge O’Sullivan to State Supreme Court. Election Day is Tuesday, Nov. 8.

Early Voting will be available from Oct. 29 to Nov. 6.

Absentee Ballot voting is also available by contacting the Board of Elections at 315-366-2231.