WAMPSVILLE — Madison County officials are anticipating plans for extensive repairs that would make the county courthouse safer and handicapped-accessible.The Board of Supervisors will take a vote … 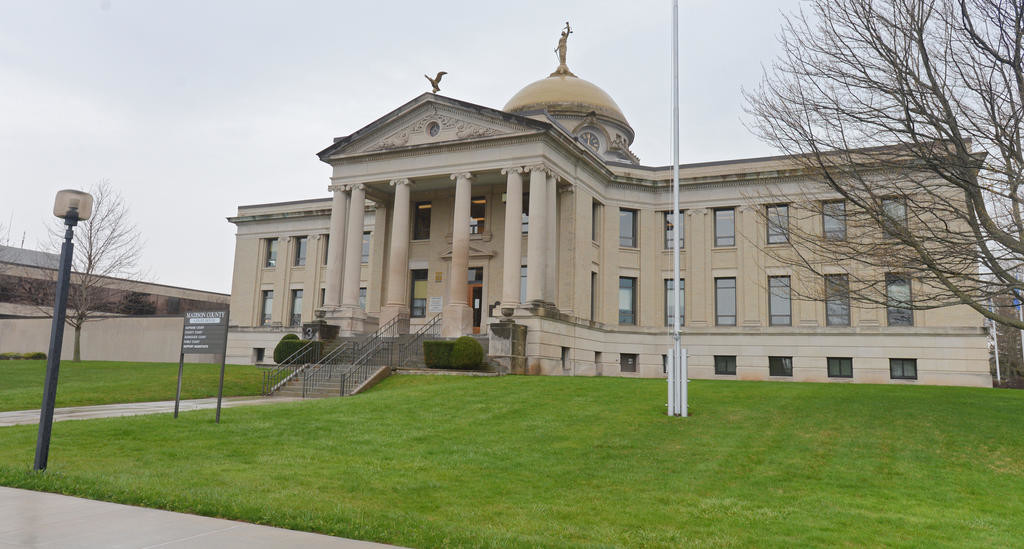 CHANGE ON THE HORIZON — The Madison County Courthouse in Wampsville is scheduled to undergo a series of repairs that will make it safer, more space-efficient and compliant with the Americans with Disabilities Act. The county Board of Supervisors plans to vote on May 10 to approve the estimated $19.7 million cost and bonding through 2020. (Sentinel photo by John Clifford)
Posted Tuesday, April 26, 2016 4:00 pm
Roger Seibert

WAMPSVILLE — Madison County officials are anticipating plans for extensive repairs that would make the county courthouse safer and handicapped-accessible.

The Board of Supervisors will take a vote during its monthly meeting May 10 on whether to move forward with the project.

“What we need at this point is the consensus of the board,” Madison County Chairman John M. Becker said at the county board’s meeting on April 12.

The renovations would begin sometime next year and would cost approximately $19.7 million. That total includes planning, construction, and rental costs when law and court offices relocate during the construction.

Repairs are estimated to take up to two-and-a-half years to complete, with a projected completion date set for sometime by the later part of 2018.

“The building is one hundred years old, and it needs extensive work done on it,” Becker said during the county board meeting April 12.

Goals of the renovations include making the courthouse safer. One move would be installing a pair of elevators that would allow separate transport of the public and prisoners. Another is relocating family court chambers out of the basement section.

“We are having issues there with mold and mildew, and people with allergies are suffering,” Becker said.

In August 2015 the federal government made an audit of the county and found the courthouse was in need of renovations to make it ADA compliant.

“We have a gun to our heads, but this is our own gun and its good we’re doing what we’re willing and legally obligated to do,” Hamilton Town Supervisor Eve Ann Shwartz said.

The ADA is a federal law passed in 1990 that is designed to prevent discrimination based on disability.

“We want to basically gut the building and start over,” County Administrator Marc Scimone said. “From the ground floor up there is no wheelchair accessibility, and the courtroom floors are angled so that someone in a wheelchair would have trouble maneuvering around.”

The third goal of the renovations is a better use of existing space.

“We have a lot of space that is not being used properly, and wasted,” Scimone said. “We want to use it better, and that includes building a grand jury room. Right now the juries have been meeting at the veterans’ building. We’d like to get them back into the main building.”

Following the bidding process the work will begin between April and May of 2017.

“At this point we want to receive the Board of Supervisors’ approval and then get a working construction model, which will take some time,” Scimone said.

During renovations, courtrooms and judges’ chambers will be located at the former Oneida Limited sales offices on Kenwood Drive.

The county would require bonding for the project, and the last scheduled bond payment would happen in May 2020.