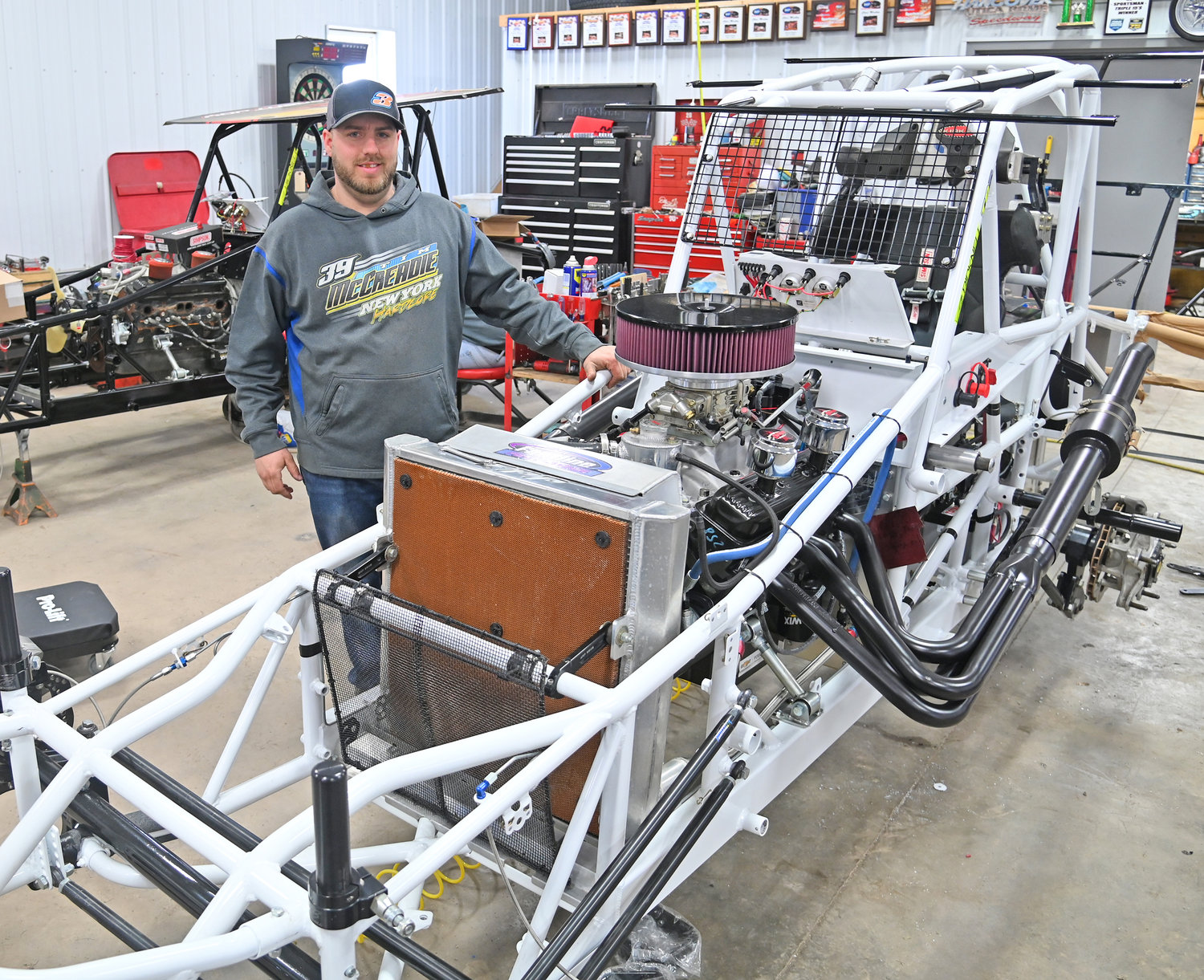 MACKEY ATTACK — Rome resident and driver Chris Mackey of the No. 3 sportsman division car stands next to what will be his Utica-Rome Speedway car at the Rood Racing shop in Oneida.
(Sentinel photo by John Clifford)

IN THE GROOVE — Chris Mackey dukes it out with Matt Janczuk at last year’s Outlaw race at Fulton Speedway. Mackey and Janczuk will be going head to head every week this season and Mackey will be one of the guys ready to claim a Utica-Rome Speedway sportsman track championship.
(Sentinel file photo by John Clifford)
Previous Next
Posted Friday, April 22, 2022 8:52 pm
John Clifford
Local Motorsports Columnist
email

VERNON — There are certain drivers who show up to a track and all the other drivers take note that driver will be tough to beat.

In the vibrant crate sportsman division that will be racing weekly at fabled Utica-Rome Speedway this season there are a handful of those drivers — Chris Mackey, of Rome, is one of them.

Mackey will be back racing at U-R Speedway this season and will be one of the guys to beat week in and week out.

“We’ve been on the other side of that — wanting to be that guy,” philosophised Mackey, “We work hard to do what we do.”

Mackey attributes a lot of his success the past couple years to being “surrounded by good people.”

Also, seat time and experience are irreplaceable — both of which Mackey has a lot of.

Watching Mackey work traffic is magic. He pounces on the smallest mistakes of other drivers. A lot of guys pounce but don’t have the car to make the move — when Mackey takes advantage of a mistake the car responds.

With all the success, Mackey had at Brewerton last season — his Friday night track — you might think he wouldn’t make the change but “The Fast Track of the East” is “close to home” and “double the money.”

In fact, the Vernon track is only about 10 miles from the Rood Racing shop where Mackey works on his cars.

The team will have two cars ready to go this season. One car will be dedicated to Utica-Rome and the American Racer tire rule and the Fulton car with the Hoosier tire rule.

Mackey said the last time he ran American Racer tires was 2013 and they “performed well.”

According to Mackey, they will bring a brand new Bicknell chassis to the track loaded up with a Donath MotorWX engine.

Next Friday, the action will be on Route 5 in Vernon and one of the guys to watch will be Chris Mackey in the No. 3.

See you next week at the races.