Members of the Rome Area Chamber of Commerce visited Joe Tahan’s Furniture, 131 Henry Street, Rome, to congratulate the family-owned business on being the Chamber Member of the Week. 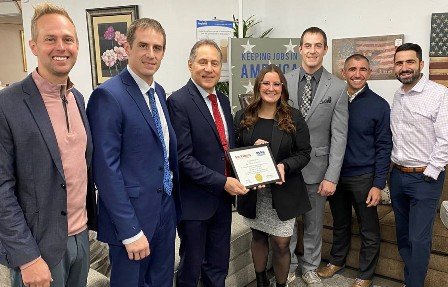 ROME — Members of the Rome Area Chamber of Commerce visited Joe Tahan’s Furniture, 131 Henry Street, Rome, to congratulate the family-owned business on being the Chamber Member of the Week.

Established in 1951, Joe Tahan’s is a family-owned business proudly serving the greater Utica-Rome and surrounding area for more than 60 years, now with the third generation of Tahan’s operating the business with the same drive and philosophy as the company founder, Joe Tahan.

The company is honored for the feature, said Al Tahan Sr.

“Rome has a very special place in our heart and is a very important part of our business story,” he explained. His father, Joe Tahan, began as a peddler selling door to door in his car in Rome after serving in WW II. “He often said he made the friends of a lifetime and customers along the way. He loved Rome and its people,” Al Tahan Sr., said. His father opening his first store in Rome on East Dominick Street in 1965 was only fitting.

“However, after only 10 months it burned in a tragic fire. Undeterred, he went back to door-to-door sales, paid his vendors and reopened on Ridge Street in 1975. We eventually moved to 131 Henry St. and our current Rome location since 1980,” Al explained. Joe Tahan’s in Rome is housed in the historic Williams Brothers knitting mill building built in 1870, where it was his father’s vision to create a store within its aging walls, Al Tahan Sr., said.

“We’ve grown along the way and added two more stores, one in Yorkville and another in New Hartford,” he continued. A fourth store will be opened next year in Marcy.

“We are in our third generation having my sons (Joe’s grandsons) Joe Tahan and Al Tahan Jr. working alongside myself, my sisters Bernadette Quenneville and Genevieve Tahan, plus 90 wonderful associates who make up our team. From all of us here at Joe Tahan’s Furniture, we thank you, we thank our wonderful Chamber for all they do, and we thank the people of Rome, where the heart of our business will always reside,” Al Tahan Sr., said.