Local volunteers are turning their 3D printing hobbies into volunteer production lines for medical face shields to donate to those working to stop the COVID-19 coronavirus. A batch of 60 shields were … 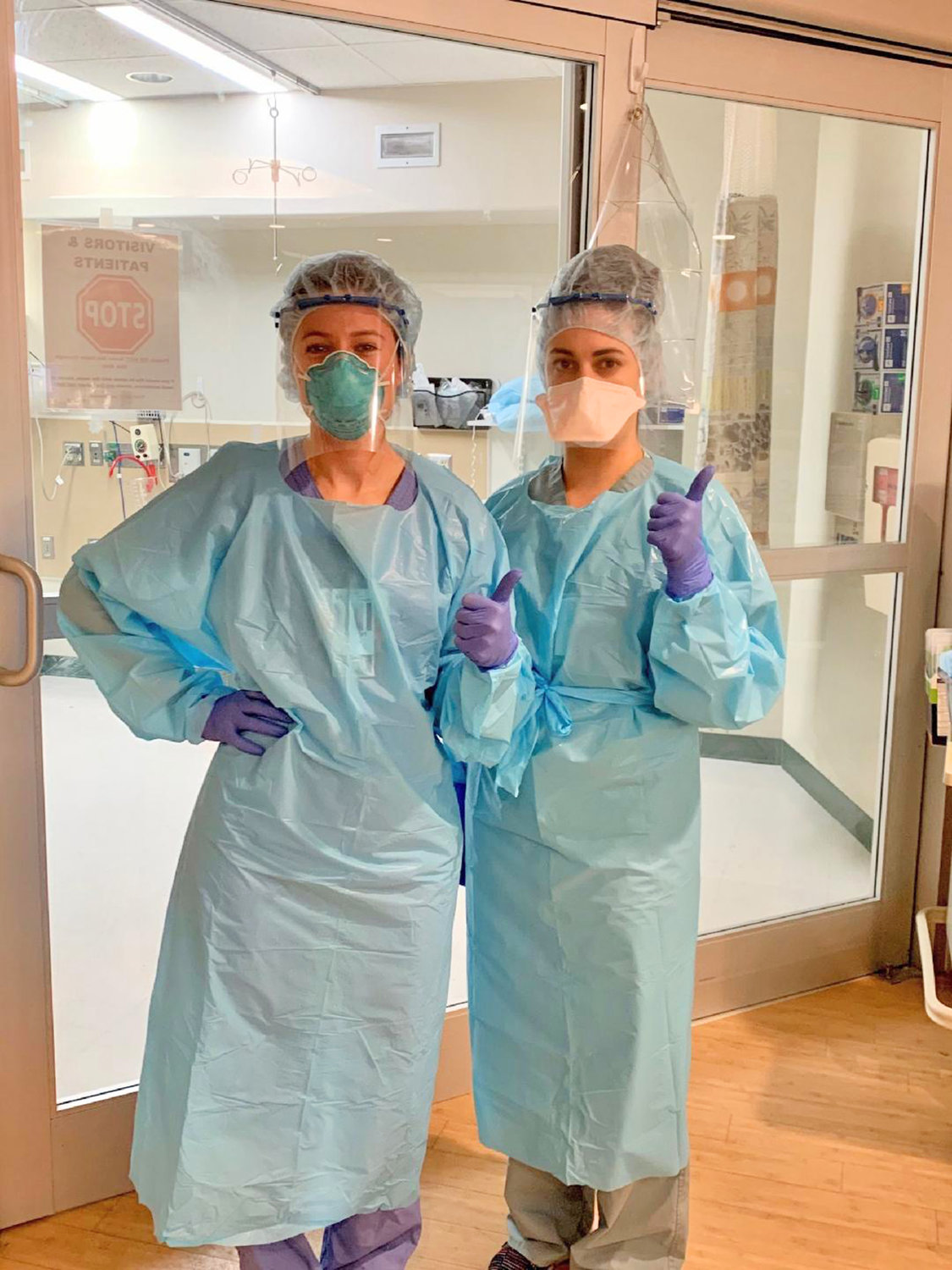 LOCALS HELP — Two nurses at UMass Memorial Hospital in Marlborough, Mass., wear face shields made on 3D printers by a small group of local volunteers who are using their own equipment at home. The group of four established RIST as a collective to make a contribution to the efforts to get personal protective equipment to health care workers during the COVID-19 coronavirus pandemic. A batch of 60 shields were also delivered to Oneida Health Hospital this week. (Photo submitted)
Posted Thursday, April 2, 2020 11:41 am

Local volunteers are turning their 3D printing hobbies into volunteer production lines for medical face shields to donate to those working to stop the COVID-19 coronavirus. A batch of 60 shields were delivered by the group to Oneida Health Hospital Tuesday.

“A small group of us is trying to do our part in the current crisis by using our personal 3D printers to create a series of medical shields to offer to health care facilities that might have a shortage,” explained Ivan Potocnik, of River Road in Marcy. “This is both to help meet a portion of the demand, albeit on a small scale, but also to raise awareness,” and show other local people that they can help as well. They 3D print the shell of the visor, which cost about $8 each to make.

Each unit takes about an hour to print. The more people involved, the more shields they can make. “Part of the reason we are doing this is to get more people on-board and to inspire those that are looking for their own way to help,” Potocnik said.

Before COVID-19, Potocnik got his printer as a hobbyist. “I only ever intended to create small structural parts for the home, sculptural pieces, and miniature figures for my (roleplaying games) and tabletop games.”

They assemble the visors in “the most clean and sanitary conditions we can fabricate, doing our best to sanitize them, bag them, timestamp them, and send a portion of them to Toni DiPalma out of Albany for distribution and a portion to any local nurses and facilities that would agree to take them,” Potocnik said.

Potocnik said he saw the concept on the internet by Joseph Prusa, a leader in the 3D printing world. The local group changed their design because Prusa’s design uses an elastic headband strap, and since those cannot be sanitized, they decided to go with a design that requires no elastic. This design prints faster so they can make the shields faster.

“​We had also heard of a Syracuse couple with a small print farm who are attempting to do the same thing,” Potocnik added. Syracuse.com profiled Isaac Budmen and Stephanie Keefe regarding their efforts.

DiPalma reached out to Potocnik and his friend Ryan Quigley of River Road in Floyd to tell them she’d been contacting other 3D printers in her network, so the two friends “started to plan how to deploy a similar process.”

DiPalma is the group’s communications director. She manages the Facebook page, the email and the GoFundMe page. She also handles all donation requests and distribution such as shipping packages and delivering them when possible. The other people on the team are Shawn Daley, Potocnik and Quigley. They call the group RIST, the first letter of the first names of each of the initial four volunteers.

When asked why he’s doing it, Potocnik said, “We’re not going to change the world with a small handful of 3D printing enthusiasts making medical visors at the scale to which we’re currently capable. We’re all just trying to make whatever difference we can in whatever capacity we’re able. If we can help to prevent even one healthcare worker from contracting the virus, statistically speaking that itself could make a serious impact.” He said that in looking at statistics about how many people one infected person can come into contact with as infection snowballs, it was clear he had to do what he could. “I’m not sure how anyone could sit still comfortably knowing that there might be something they could do to help.”

“We have been so surprised and grateful for the outpouring of support from so many people,” said DiPalma. The group’s GoFundMe page for donations has already been a success, with enough funds to buy three new printers to ramp up production and get more shields done faster.

There’s plenty of research to do as part of this effort. Potocnik talked to his sister, a resident physical therapist in a hospital with confirmed cases of COVID-19, as well as several nurses locally and elsewhere, “all of whom have expressed interest in using a mask like these.” With shortages, some in the health care field have had to resort to using less-than-effective things such as handkerchiefs, which don’t have the microfiber density to stop the virus.

The group is working with Assemblyman John J. Salka, R-121, Brookfield. He has been “invaluable to helping us, and has gotten us in direct contact with hospitals and other people that could help refine our production in relation to die-cutting the plastic acetate that is used for the shields,” DiPalma noted.

Salka was a respiratory therapist for over 30 years. Salka, who has a district office in Oneida, has been working to get health care providers the supplies they need.

He said his focus in this venture has been to help the volunteers “ramp up their production,” to make shields better and faster. He said he reached out to companies about equipment, since he has contacts in the medical field from his career in it. “The whole idea is to ramp up production and get these PPE components to those who need them.”

“This is a wonderful effort,” said Salka. “People are taking it into their hands.” He said it shows “how close a community can work together when there’s need. It’s really pretty awesome.”