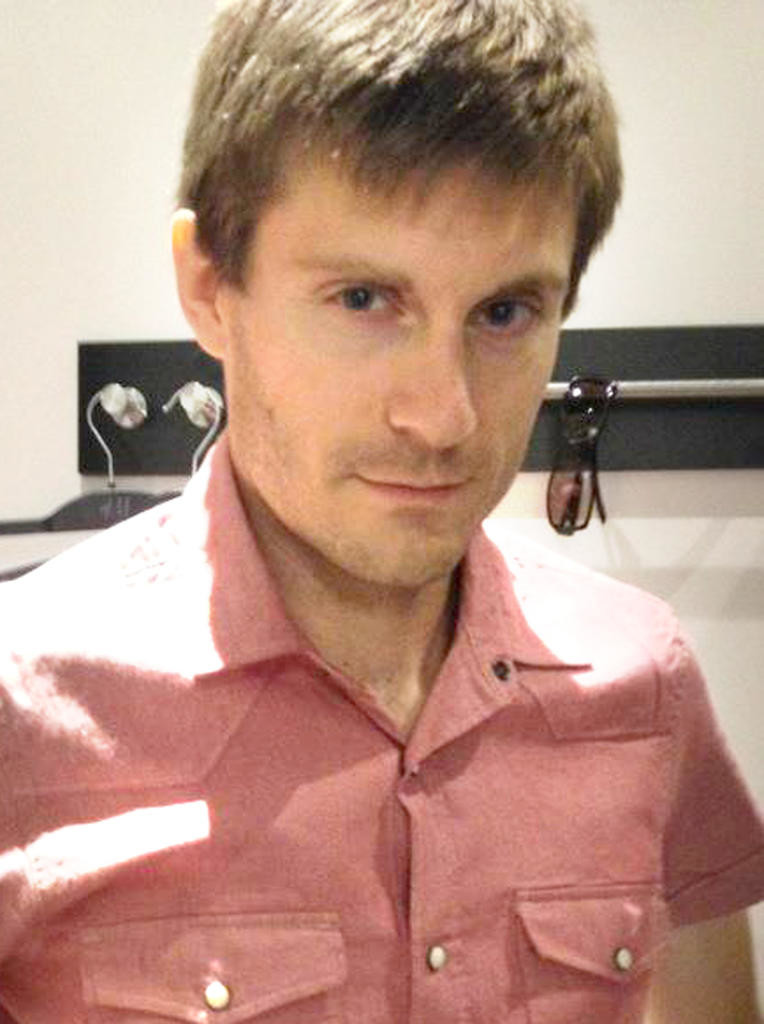 MAN OF MANY WORDS — Chris Lipe of Clinton, a 1998 Holland Patent high school graduate who is a computer programmer at the Rome Air Force Research Laboratory, finished second at the world Scrabble Champions Tournament in London last month. (Photo submitted) 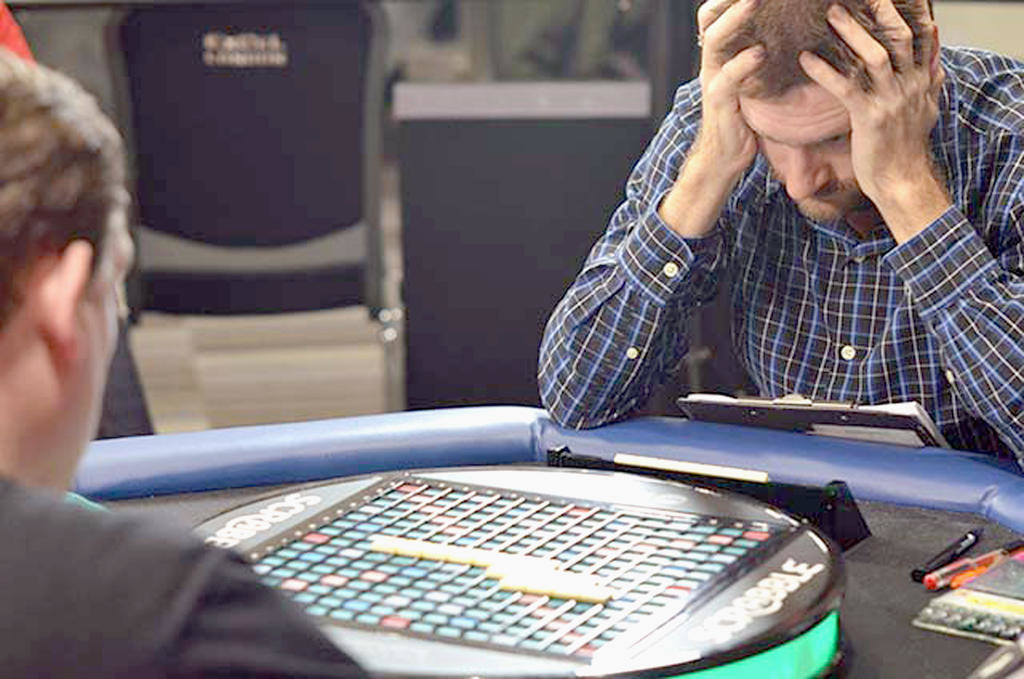 HEAD GAMES — Chris Lipe of Clinton holds his head while pondering a move in the finals of the world Scrabble Champions Tournament that was held in London last month. The tournament was won by a British player, Craig Beevers, from Guisborough near Middlesbrough. (Photo submitted) 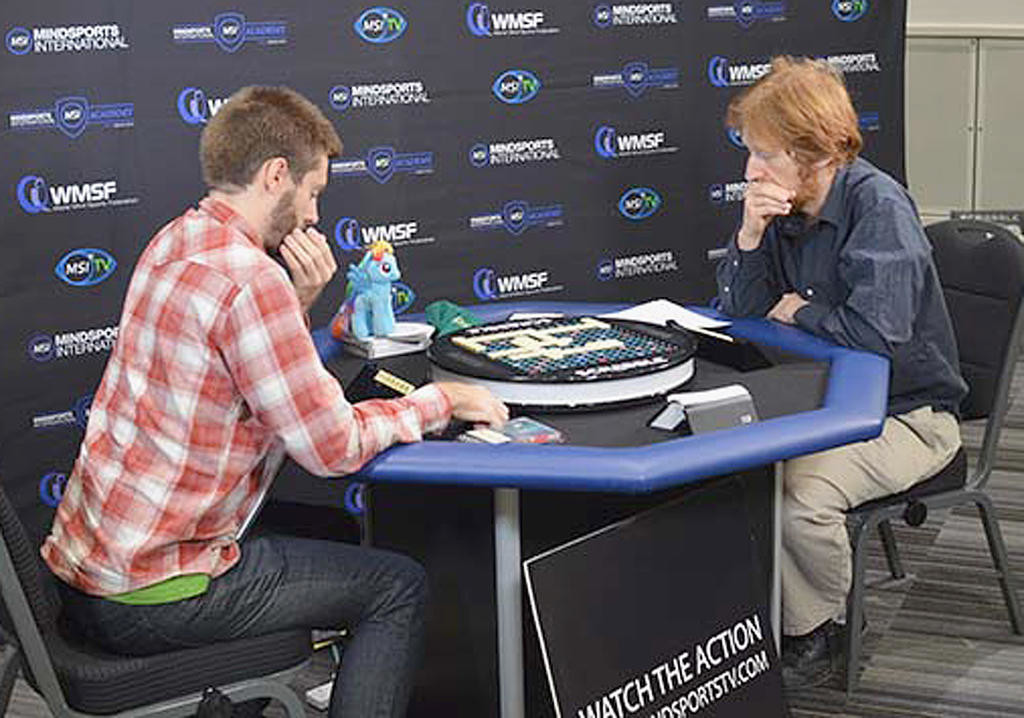 THINKING IT THROUGH — Chris Lipe of Clinton, left, competes against Adam Logan of Canada during the semifinal of the world Scrabble Champions Tournament last month in London. Lipe won that match and wound up finishing second in the competition. (Photo submitted) 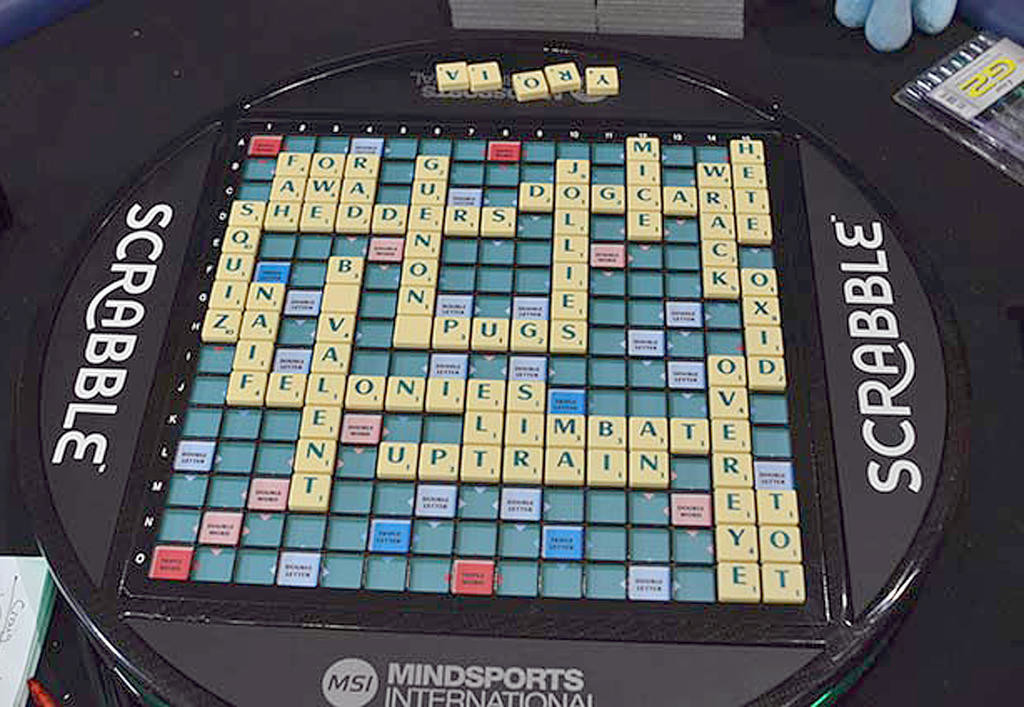 SPELLING A ‘WIN’ — Here is the completed game board from Game 3 of the final round in the world Scrabble Champions Tournament in London. Chris Lipe of Clinton won that game but lost in the final three games to one. Among Lipe’s words: “bivalent,” using a blank tile for “i,” and “guenons,” using a blank tile for “s.” Some of his other plays on the board were “jolies,” “squiz,” “felonies,” and “limbate.” (Photo submitted)
Previous Next
Posted Tuesday, December 9, 2014 4:00 pm
DAVE GYMBURCH

Chris Lipe of Clinton says “people seem intrigued” by his pastime, but they “generally don’t get too interested in the details....”

Lipe notes, “all you have to do is answer the ‘how was your weekend?’ question with ‘yeah I stayed home and studied all the eight-letter words with five or more vowels’ once, and they really stop asking for too many details.”

A competitive Scrabble player who works at the Rome Air Force Research Laboratory, Lipe last month achieved what he called an “amazing experience,” finishing second at the world Scrabble Champions Tournament in London. He competed with more than 100 players from more than 25 countries over five days, finishing second to Craig Beevers, a British player from Guisborough near Middlesbrough, said online reports including bbc.com and dailymail.co.uk. The event concluded Nov. 23.

“It’s a big deal and I’m still amazed that it actually happened,” remarked Lipe, a 1998 Holland Patent high school graduate. He said his previous best finish at a major event was 12th at the 2011 World Scrabble Championship in Warsaw, Poland.

In losing the best-of-five final three games to one, some of Lipe’s word plays in the game that he won likely would have required many people to reach for a dictionary: “guenons,” “squiz,” “limbate,” and “bivalent.”

Asked which of his word entries in the tournament pleased him the most, Lipe mentioned “poleward,” plus being able to convert the letters “aafiltt” into “fatalist” with the help of an “s” he had on the board, followed by “fatality” after an opponent’s play put a “y” in position.

“Sometimes it’s common words that are difficult to see, so when I’m focused enough to see them immediately I know I’m playing pretty well,” Lipe observed.

Overcoming an opponent’s challenge of a word entry also was a highlight. Lipe noted that he played “reffo,” a derogatory Australian term for a refugee, and when it was challenged “we looked it up on the computers, and it was a valid word.” Under international rules, he got an extra five points, and said he wound up winning that game by nine with the help of another five-point challenge bonus later in the game.

A graduate of Ithaca College with a degree in music composition and of SUNYIT with a degree in computer science, Lipe said he is a computer programmer at the Rome Air Force Research Laboratory. He had been “playing Scrabble casually since I was a kid,” but did not enter his first tournament until 2005. He did poorly at that event which was in New Hartford, but for another tournament a few weeks later in Saratoga Springs he prepared by “cramming like crazy to memorize all the two- and three-letter words in the Scrabble dictionary.” He fared much better in that event, “and I was hooked.”

Lipe, who is single, said his girlfriend who lives near Philadelphia also is a competitive Scrabble player whom he met at a tournament. He praised the “social aspect of the tournament scene,” noting “I’ve made lots of really great friends from all over the world playing Scrabble, really interesting people of all ages and backgrounds.”

Lipe said he feels Scrabble is “growing in popularity in large part due to the online games like the Facebook Scrabble, or Words with Friends,” citing “all kinds of people from every walk of life who play these things casually.” But the challenge is “how do we get the people who are playing online all the time to try out in-person events?” Observing that the tournament environment has “stayed about the same size over the last 10 years, even as interest in these Internet games has increased,” he said “it’s a tough problem.”

Lipe participates in a Scrabble club that he said meets weekly, on Mondays at 6:30 p.m. at Tony’s Pizza on College Street in Clinton. He referred to “about four of five of us” who gather to play, with “new players always welcome.” He said he plays in a lot of tournaments mostly in the Northeast, usually once or twice a month.

For upcoming competitions, Lipe in January plans to head to Las Vegas and New Orleans. For the “next major international event on my calendar,” he is eyeing the King’s Cup event that is held each summer in Bangkok, Thailand.

But even more than playing, said Lipe, he spends a lot of preparation time, “studying words and practicing anagramming” for at least an hour or two per day.

“To play Scrabble at a high level, you have to know lots of words cold, and be able to recall them in whatever high-pressure situation you find yourself,” Lipe commented.