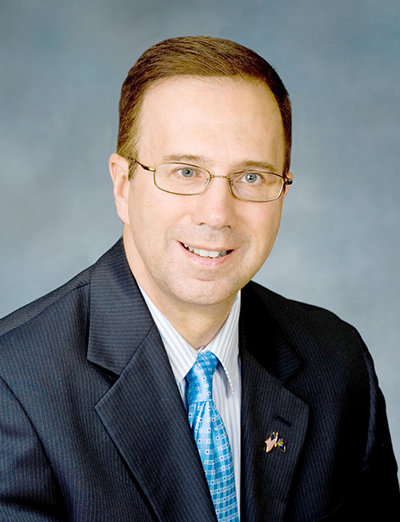 In a Tuesday press conference, state Sen. Joseph Griffo, R-47, Rome, urged New Yorkers to research and make an informed decision on referendums that will be on the November ballot that will, he claims “return redistricting to a partisan, gerrymandered process.”

“Election Day is two weeks away,” Griffo pointed out, noting that there are five constitutional amendments on the November 2 ballot.

The first, of which, “would freeze the number of state senators at 63, amend the process for the counting of the state’s population, delete certain provisions that violate the United States Constitution, repeal and amend certain requirements for the appointment of the co-executive directors of the redistricting commission and amend the manner of drawing district lines for congressional and state legislative offices,” according to the proposition text.

But, there is hub-bub about the routine maneuver.

“Once a decade, New York State is required to draw new district lines that reflect population and demographic changes reported in the most recent Census. Unlike in previous years when politicians drew those lines, more than two million New Yorkers voted in a 2014 referendum to give that responsibility to a new ‘Independent Redistricting Commission,’” a statement from his office reads.

The commission, which was the result of a bipartisan effort between Senate Republicans and Assembly Democrats supported by former Gov. Andrew Cuomo, ensured that the redistricting process was independent and bipartisan.

In the name of fairness, Cuomo and his Democratic allies once welcomed the creation of a nonpartisan redistricting commission that would redraw congressional maps free of political influence and avoid contorted gerrymandering.

But, to Griffo and others, the proposed redistricting plan would make it easier for the Legislature and Albany insiders to decide legislative districts and representation for voters across New York.

“The amendment would essentially neuter the Independent Redistricting Commission and allow the majorities in the Legislature to redraw district lines that are favorable to them and not voters,” a statement reads.

One example of an issue Griffo gave is that the redistricting measure would create a path of concerns such as making it possible for towns and even streets to be split so that communities would have different representatives. That could mean some communities might not be able to stand together at the voting booth.

‘’Ballot Proposition No. 1 is too complicated. It looks to achieve too many different outcomes and will ultimately decide the fate of several important issues in an ‘all or nothing’ manner. The description and explanation of this lone proposition totals more than seven and a half pages on the state board of elections website. A ballot proposition ought to be simple to explain and understand, so that each voter knows what they are voting-on when they cast their ballot. As it relates to the issue of redistricting specifically, as I have previously stated, I continue to have concerns. Redistricting should always be transparent and free of gerrymandering, allowing voters to have confidence in the process,” Buttenschon said in a statement.

Griffo was also joined at his Tuesday news conference by Kari Puleo, executive director of the Greater Utica Chamber of Commerce, and Dianne DiMeo, vice president of the League of Women Voters for the Utica/Rome Metro Area, who asserted the politically neutral League of Women Voters stance that, “All New Yorkers must be equally represented regardless of party.”

Speaking from a business perspective, Puleo said, “The Greater Utica Chamber of Commerce urges all voters to carefully read and review this proposal as it is part of an important process that will shape political representation at all levels for the next decade … While necessary changes need to be made to the redistricting process, Proposal 1 is overly complicated and effectively weakens the voice of the minority party, therefore falling short of a truly independent redistricting committee. Additionally, the proposal curbs public participation in the redistricting process. For these reasons, we urge voters to vote no on Proposal 1.”

DiMeo added, “The League of Women Voters of Utica/Rome, in conjunction with the League of New York State, has taken a position of not being in favor of Proposition 1 … Although we feel there are some positive aspects of the proposed amendment, New York State is currently in the middle of redistricting its congressional and legislative maps and this amendment will create further complications if it is adopted. The League’s primary opposition has to do with the proposed voting process. The current redistricting amendment ensures fair representation of the majority and minority parties by including a special voting process if the Assembly and Senate are both controlled by a single party. This proposition removes those fail-safe procedures so that maps only need to be approved by just a simple majority of Commissioners and Legislators. The League is strictly nonpartisan and believes that all New Yorkers must be equally represented regardless of their party affiliation or non-affiliation. If a single party has the ability to control the approval of new legislative district lines, there is a much greater risk of gerrymandering.”

-To see the statewide referendums on the ballot, visit: https://www.elections.ny.gov/2021BallotProposals.html