WASHINGTON, D.C. — President Joe Biden has nominated an Obama-era U.S. attorney to run the Bureau of Alcohol, Tobacco, Firearms and Explosives, as his administration aims to rein in ghost guns — … 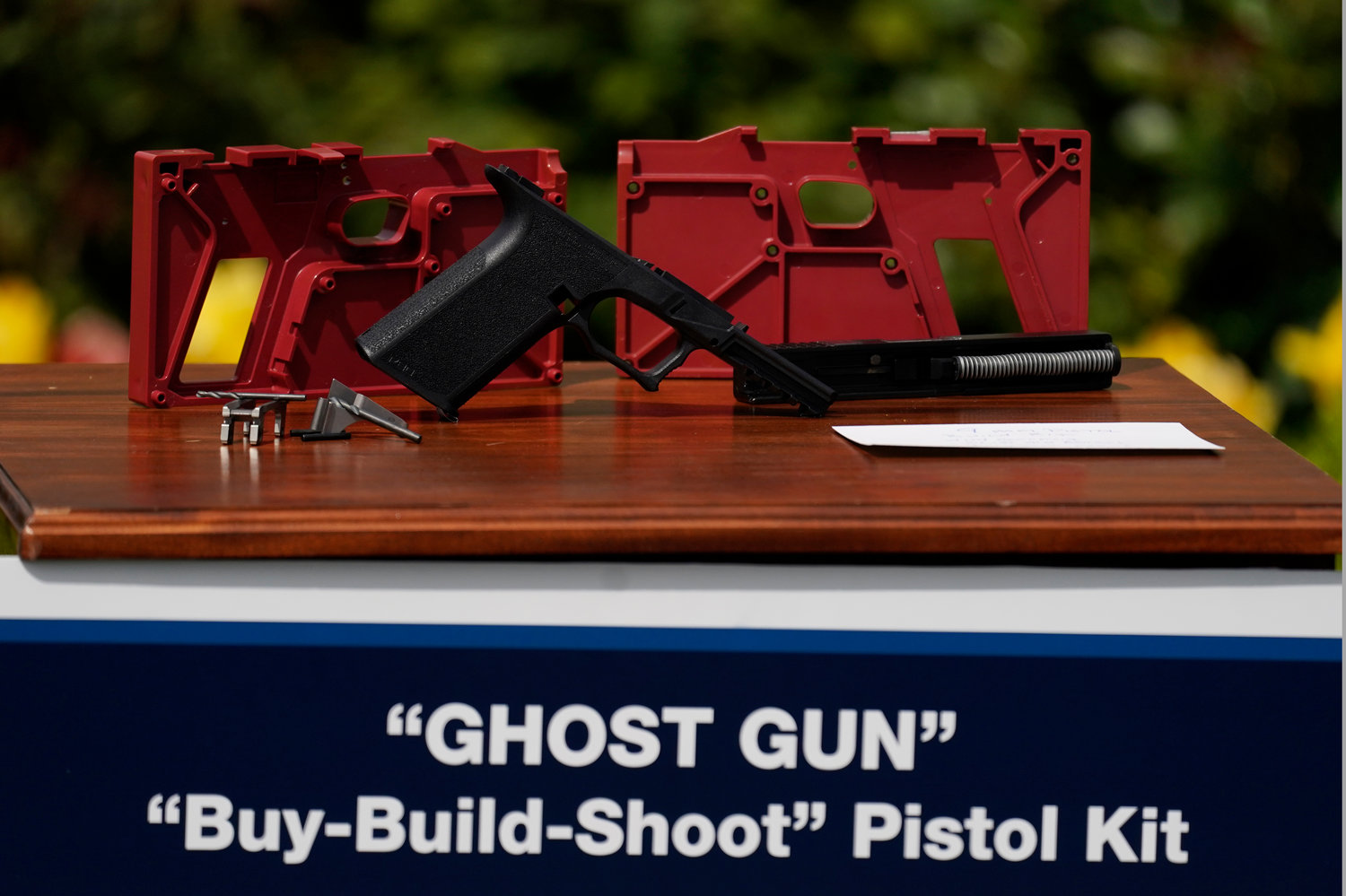 A 9mm pistol build kit with a commercial slide and barrel with a polymer frame is displayed during an event in the Rose Garden of the White House in Washington, Monday, April 11, 2022. President Joe Biden announced a final version of its ghost gun rule, which comes with the White House and the Justice Department under growing pressure to crack down on gun deaths..
(AP Photo/Carolyn Kaster)
Posted Tuesday, April 12, 2022 8:30 am
Staff and wire reports

WASHINGTON, D.C. — President Joe Biden has nominated an Obama-era U.S. attorney to run the Bureau of Alcohol, Tobacco, Firearms and Explosives, as his administration aims to rein in ghost guns — privately made firearms without serial numbers that are increasingly cropping up at crime scenes.

Biden announced the nomination of Steve Dettlebach, who served as a U.S. attorney in Ohio from 2009 to 2016, on Monday afternoon while also releasing the finalized version of its ghost gun rule.

Justice Department statistics show that nearly 24,000 ghost guns were recovered by law enforcement at crime scenes and reported to the government from 2016 to 2020. It is hard to say how many are circulating on the streets, in part because in many cases police departments don’t contact the government about the guns because they can’t be traced.

Ghost guns have been a noticeable problem in Oneida County in recent years, according to local police; however, gun groups have vowed to fight the federal measure.

“They’re illegal, they’re dangerous because there’s no serial number on them, so they can change hands rather quickly and we don’t have a history on them,” said Rome Police spokesperson Lt. Sharon Rood. “And they’re manufactured by the people who ordered and received them, not necessarily by professionals.”

Rood said ghost guns have become and issue in Rome and their use is “gaining steam.”

“We’ve seen more of them now than ever,” she stated.

Likewise, Utica Police spokesperson Sgt. Michael Curley said there have been more and more ghost gun arrests in Utica over the past several months.

“We have come across numerous amounts of ghost guns, more so than ever before,” Curley stated. “We recognize the
problem, and appreciate any kind of accountability from the local and federal level.”

For nearly a year, the ghost gun rule has been making its way through the federal regulation process. Gun safety groups and Democrats in Congress have been pushing for the Justice Department to finish the rule for months. It will probably be met with heavy resistance from gun groups and draw litigation in the coming weeks.

Gun Owners of America vowed that it would immediately fight the rule.

“Just as we opposed the Trump Administration’s arbitrary ban on bump stocks, GOA will also sue Biden’s ATF to halt the implementation of this rule,” Aidan Johnston, the group’s director of federal affairs said in a statement. The group believes the rule violates the U.S. Constitution and several federal laws.

But gun safety advocacy groups, like Everytown for Gun Safety, which pushed the federal government for years to take action on ghost guns, applauded Biden’s moves and insisted that both Dettlebach’s appointment and the finalized rule will help combat gun violence.

Christian Heyne, the vice president of policy at Brady, another gun control group, said Dettlebach was “an unimpeachable public servant who has spent a career using the levers of government to hold negligent or nefarious actors accountable.”

The new rule changes the current definition of a firearm under federal law to include unfinished parts, like the frame of a handgun or the receiver of a long gun. It says those parts must be licensed and include serial numbers. Manufacturers must also run background checks before a sale — as they do with other commercially made firearms. The requirement applies regardless of how the firearm was made, meaning it includes ghost guns made from individual parts, kits, or by 3D-printers.

Federally licensed firearms dealers must retain key records until they shut down their business or licensed activity and then transfer the records to ATF as they are currently required to do at the end of licensed activity. Previously, these dealers were permitted to destroy most records after 20 years, making it harder for law enforcement to trace firearms found at crime scenes.

For years, federal officials have been sounding the alarm about an increasing black market for homemade, military-style semi-automatic rifles and handguns. As well as turning up more frequently at crime scenes, ghost guns have been increasingly encountered when federal agents buy guns in undercover operations from gang members and other criminals.

Some states, like California, have enacted laws in recent years to require serial numbers to be stamped on ghost guns.

The critical component in building an untraceable gun is what is known as the lower receiver, a part typically made of metal or polymer. An unfinished receiver — sometimes referred to as an “80-percent receiver” — can be legally bought online with no serial numbers or other markings on it, no license required.

A gunman who killed his wife and four others in Northern California in 2017 had been prohibited from owning firearms, but he built his own to skirt the court order before his rampage. And in 2019, a teenager used a homemade handgun to fatally shoot two classmates and wound three others at a school in suburban Los Angeles.

Dettlebach’s confirmation is likely to be an uphill battle for the Biden administration. Biden had to withdraw the nomination of his first ATF nominee, gun-control advocate David Chipman, after the nomination stalled for months because of opposition from Republicans and some Democrats in the Senate.