A “Burnout Crisis,” as a recent New York Times article calls it, describes the impact of the pandemic’s impending strain on the healthcare workforce. As staff shortages continue among COVID … 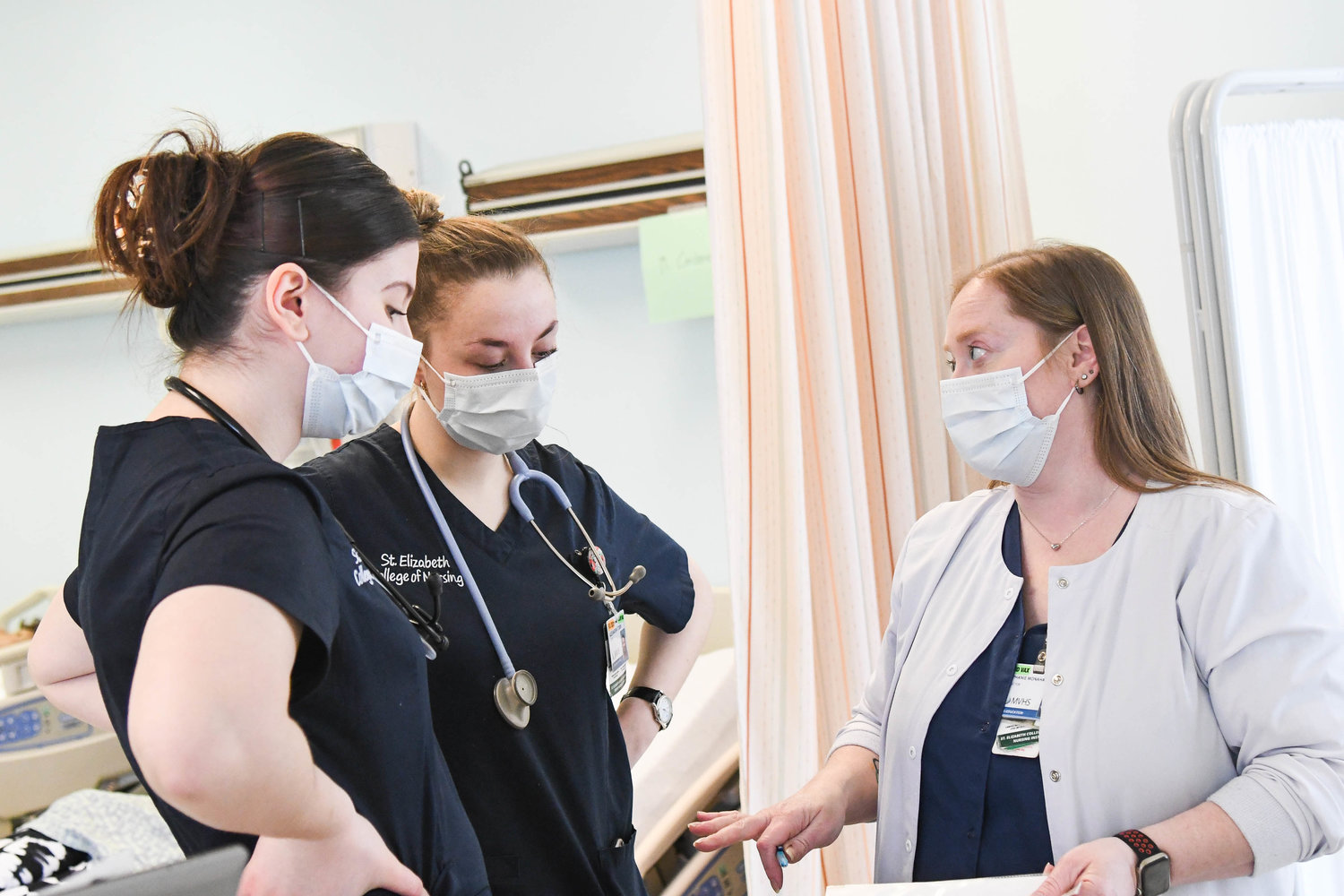 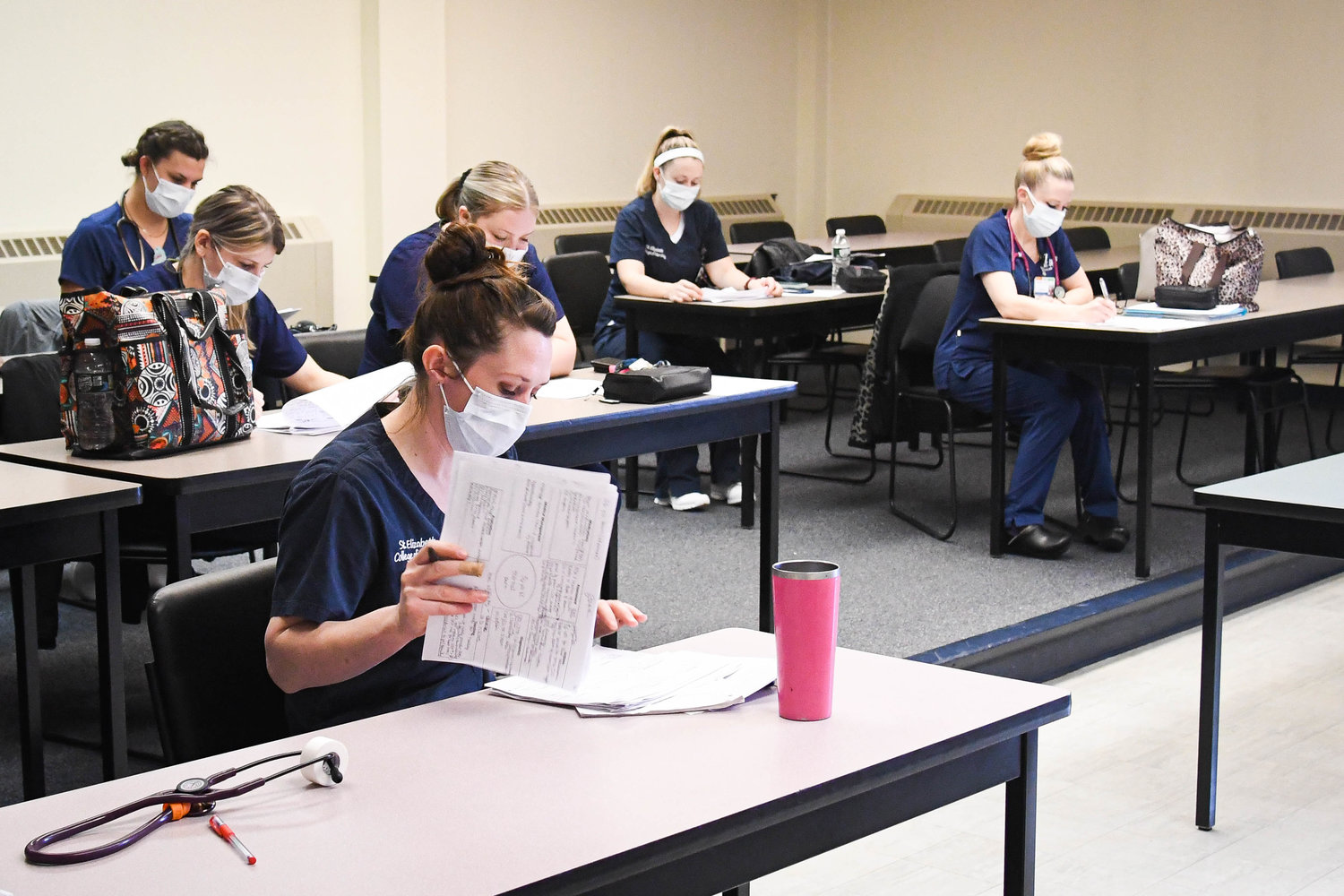 A “Burnout Crisis,” as a recent New York Times article calls it, describes the impact of the pandemic’s impending strain on the healthcare workforce.

As staff shortages continue among COVID influxes and disruptions, ensuring there’s a line of prospective (and continuing) nurses gearing up to meet the ever-growing demand is vital.

Are area students heeding the call? Despite a drop-off in enrollment apparent at the pandemic’s onset for many institutions, local officials are hopeful for the workforce’s future. Some schools have even seen their numbers grow.

Varinya Sheppard, president of St. Elizabeth College of Nursing, says that when it comes to getting their degrees, nursing students have struggled to manage since COVID began. Their weekend program, in particular, has been the hardest hit.

“Our weekend program typically is comprised of adults looking for second careers. [They] will have a Monday-Friday job and then go to classes in the evenings and also do classes and clinical on the weekend,” she explained.

In the fall of 2020, months after the COVID shutdowns in March, “that class had a significant decrease in enrollment. We noted that right away.”

The common demands on these students at the time —a full time job, educating their children at home amidst school closures, and completing the program itself— were too great. Something had to give, and for many, that meant taking a pause on their studies. “They felt [it] would be just too overwhelming,” Sheppard remarked.

At that time, St. Elizabeth’s weekend class enrollment fell to 10, when it had previously been 25. No one dropped out during the semester from March 2020 onward, she noted. This year, eight of that 10 are graduating from the program.

The college’s weekday program, which sees more traditional students, has also faced obstacles keeping enrollment up, though not as dramatically. Sheppard attributed this partly to remote learning.

“We stayed in-person for almost all of it except for the first two months of the pandemic,” she reported, adding that clinicals have continued in-person uninterrupted. However, some of SUNY Polytechnic’s classes, which several St. Elizabeth students attend as a part of the two colleges’ 1+2+1 partnership program, were at least partly remote. 1+2+1 blends associate and bachelor’s programs between the two schools over four years. On its own, St. Elizabeth offers an associate degree.

More recently, vaccine mandates to attend have kept some students away — even seniors about to finish, Sheppard revealed. This has affected other area schools as well.

The good news, she says, is that enrollment, overall, is bouncing back. Students who took a pause have been reapplying and returning. “Especially the weekend program, [which] now has high applications.” The college anticipates an incoming class for the fall of 2022 to include 30 weekend students: three times the amount who signed up in the fall of 2020.

Contributing to this upward trend is St. Elizabeth’s recent recruitment initiative. “Because we are a hospital based program, we have the ability to offer an education-to-employment initiative that, with support for their nursing tutition, they would commit to employment at MVHS post-graduation. That has been very successful,” Sheppard says. “People now have [the] opportunitiy to have their education supported.”

Leaders at SUNY Poly have seen similar challenges with retaining their nursing numbers. “I think before COVID, we were actually seeing a slight increase in enrollment. Although our overall enrollment has been slow to increase over the last number of years compared to a dozen years or so ago when enrollment was quite high,” explained SUNY Poly Director of Undergraduate Nursing Dr. Francia Reed. “Since COVID, we have seen a drop-off.”

SUNY Poly’s undergraduate nursing program is designed primarily to suit registered nurses (RN) with their associates who are completing their bachelor’s requirement, Reed explained. RNs must obtain their BS in nursing within 10 years of their initial licensure to continue practicing. For these students, they face a whole new set of challenges.

“What we’re seeing is that the nurses who are remaining in the work place, they’re dealing with being overworked. I had a student not too long ago who asked for an extension for an assignment because they said that they had worked six 12 [hour shifts] in a row. I certainly gave them an extension,” Reed said. Along with taking on extra shifts to fill shortages, it’s also not uncommon for nurses to face mandated overtime, she explained.

“One of the things with nurses is, we’re often very goodhearted people. When there’s a need, we respond. No one wants to leave their buddies short handed or leave patients uncared for. So we often respond to the need, much to our own detriment,” she shared. It’s not that they don’t want to continue their studies right now, she says, it’s that they simply don’t feel able to do so.

Conversely, several established, long-time nurses are choosing to go beyond their bachelor’s, and this has been true since the pandemic began, says Dr. Lynne Longtin, SUNY Poly nursing graduate program director. “We actually have had a very healthy enrollment for the nurse practitioner program.” She continued, “That we’re grateful for.”

Graduate enrollment has remained strong for several reasons. “Many of them have been working for several years, and they’ve put money aside so they can kind of take a little hiatus from work or go part-time,” Longtin explained.

They’re also motivated to rise through the industry ranks “to get a better path for themselves and their family to get a promotion, perhaps. So it’s worth it for them to take a little less time at work than the new nurse who’s just not going to make anymore money if she gets a BS degree,” Longtin said.

Reed explained that depending on the employer, bachelor’s degrees are highly sought after for entry-level nursing positions. Sometimes, it’s even a requirement to get in the door. With bachelor’s being the standard (and the law to acquire at some point), a master’s is one of the few ways to stand out, and make more.

This dynamic can put beginner nurses in a pinch, the SUNY Poly scholars explained. As more experienced nurses step back to pursue a higher degree, there’s more strain on the newer nurses to take on extra shifts and fill the gaps.

Recruiting new students hasn’t been a struggle across the board. At Mohawk Valley Community College (MVCC), enrollment remained stable, according to Melissa Copperwheat, dean of the school of health sciences. In fall of 2021, enrollment increased, and their goals are on track for 2022, she says.

Initially, MVCC officials weren’t sure what to expect since the pandemic began. Copperwheat says on one hand, “nurses are very very much needed in the community right now,” but on the other, “healthcare is also viewed as pretty challenging right now because of everything that’s occurred with COVID.”

So what caused MVCC’s enrollment to remain steady? The dean suspects that healthcare’s exposure in the media could have had something to do with it, along with the first-hand COVID experience many students have faced themselves.

From interviewing applicants, she says, “they’ve seen what’s been going on and although it’s been challenging, they want to be a part of that and to make a difference.”

Reed noted a similar observation when it comes to students deciding to step into the field for the first time.

She added, “The one thing that makes [St. Elizabeth] probably more unique is the fact that it’s not just a college population [that’s] typical, but we’re also healthcare providers. So students experienced COVID from a whole different aspect than most college level students. They were actually at the bedside caring for COVID patients. I think they really contributed to improving the health of the community right from that front level [as a] frontline caregiver.”

If you’re on the road to finish nursing school, keep going, Reed and Longtin say. “It’s often a very common statement that we get from students in their last course, to say ‘Oh, now I get it. Now I appreciate why I needed to earn the bachelor’s degree. I couldn’t understand it before, but now I get it,’” Reed said. The final courses truly broaden the scope of the practice, she said, and finishing unlocks a new, rewarding view of the job.