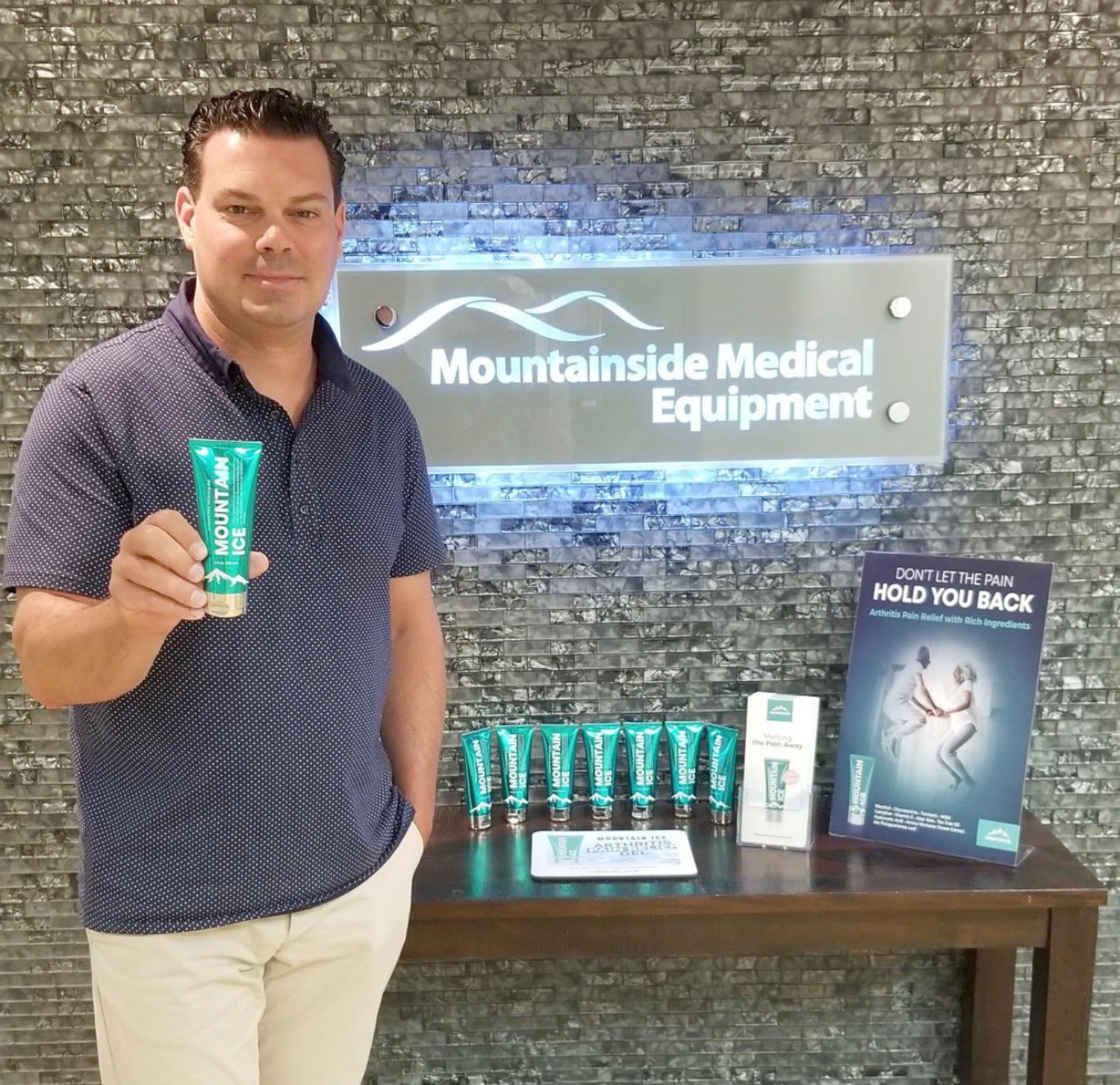 MARCY — Clinton resident and medical product distributor Martin Zarnock Jr. is sick of the pain and wants to get rid of it without smelling like a eucalyptus tree.

He said he is so tired of it when he couldn’t find anything else to use except the better known products like Biofreeze, Icy Hot and Bengay, he decided to develop his own pain relieving gel, Mountain Ice.

“I felt I could do better,” said Zarnock Jr., co-owner of Mountainside Medical Equipment in Marcy. “I’ve used these other products myself and after putting them on I found them to be very menthol smelling, greasy and basically a mess.”

And he would know, Zarnock Jr. is a partner with Zarnock Sr. in a company, and has been distributing such products since 2002.

Zarnock Sr. has been in the business for over 40 years, first coming to the profession in the Army as a medic, where he discovered the importance of providing durable, high quality medical supplies. Staff Sgt. Zarnock was deployed to Vietnam in 1968 and did not return stateside until 1970.

Zarnock, the son, said he’s been a big advocate of vitamins and natural cures which deal with the healing properties of people’s illnesses and injuries for some time now, and a skeptic about many of the ingredients in popular products.

“Looking at the ingredients in most, if not all of the established brands, they include a lot of isopropyl alcoholic,” Zarnock Jr. said. “They also put Lidocaine in there, and all that does is numb your skin, not treat the joints and inflammation underneath the skin surface,” he said.

Zarnock Jr. said he wanted to include components that would have therapeutic value. Components like Turmeric, which Zarnoff claims has “powerful anti-inflammatory and anti-oxidants for joint pain.”

“For instance Turmeric is added in there,” he said. “It’s a powerful ingredient basically used for anti-inflammatory and is an anti-oxidant , you hear about it a lot, people are using it more and more for all types of ailments,” he claimed.

While many of the ingredients have not been federally approved by the Food and Drug Administration for specific use as pain relievers or have not been scientifically proven to be effective for pain relief, that hasn’t stopped some people from raving about the product.

Customers like Utica College head softball coach, Patrick Mineo, who said he is sleeping better due to the relief he’s getting with this product. Mineo also said he needs a knee replacement, and he’s been putting it off...but that’s OK because the gel is working.

“I have been using it myself for the past three days,” Mineo said. “It’s not hot, like some of the other products I’ve used. It doesn’t have a heavy scent either. I’m very happy with the product.”

Several residents of the Eastern Star Nursing Home in Oriskany have used the products and have really enjoyed it, according to Zarnock Jr.

“We tried it in the therapy department,” Zarnock Jr. said. “They picked six residents and they tried it on them six times a day. These are residents on opioid regimens for arthritis and joint pain. In the end, four out of the six patients switched from their medicine to my product.”

Zarnock Sr. who started working for a civilian medical distributor when he was discharged from the Army said it was satisfying watching his son do something he loved, was good at, and helped people.

“I’m very proud of him,” said Zarnock Sr. “He’s taken this project on himself, with just a little guidance from me, I think he respects me because I’ve been in the business so long. But to create a product, market a product and develop a winner for the healthcare industry, in my eyes it’s something exceptional and something I myself always wanted to do.

Zarnock Jr.’s aspirations for the company heading into the future are crystal clear. “I think our product is a much more superior product and I want it’s name known by everyone in every household. I feel it’s a better product, I just want to get the word out,” he said. “I mean I really feel like we have a winner here and it is working...I just want as many people who can benefit from it to do that.

People can learn more about the product, including its cost, by viewing the website www.mountain-ice.com or by calling 888-687-4334.