Scientists are preparing to study an interesting phenomenon in Upstate New York — thundersnow — a weather event that is hardly par for the course of wintry events. 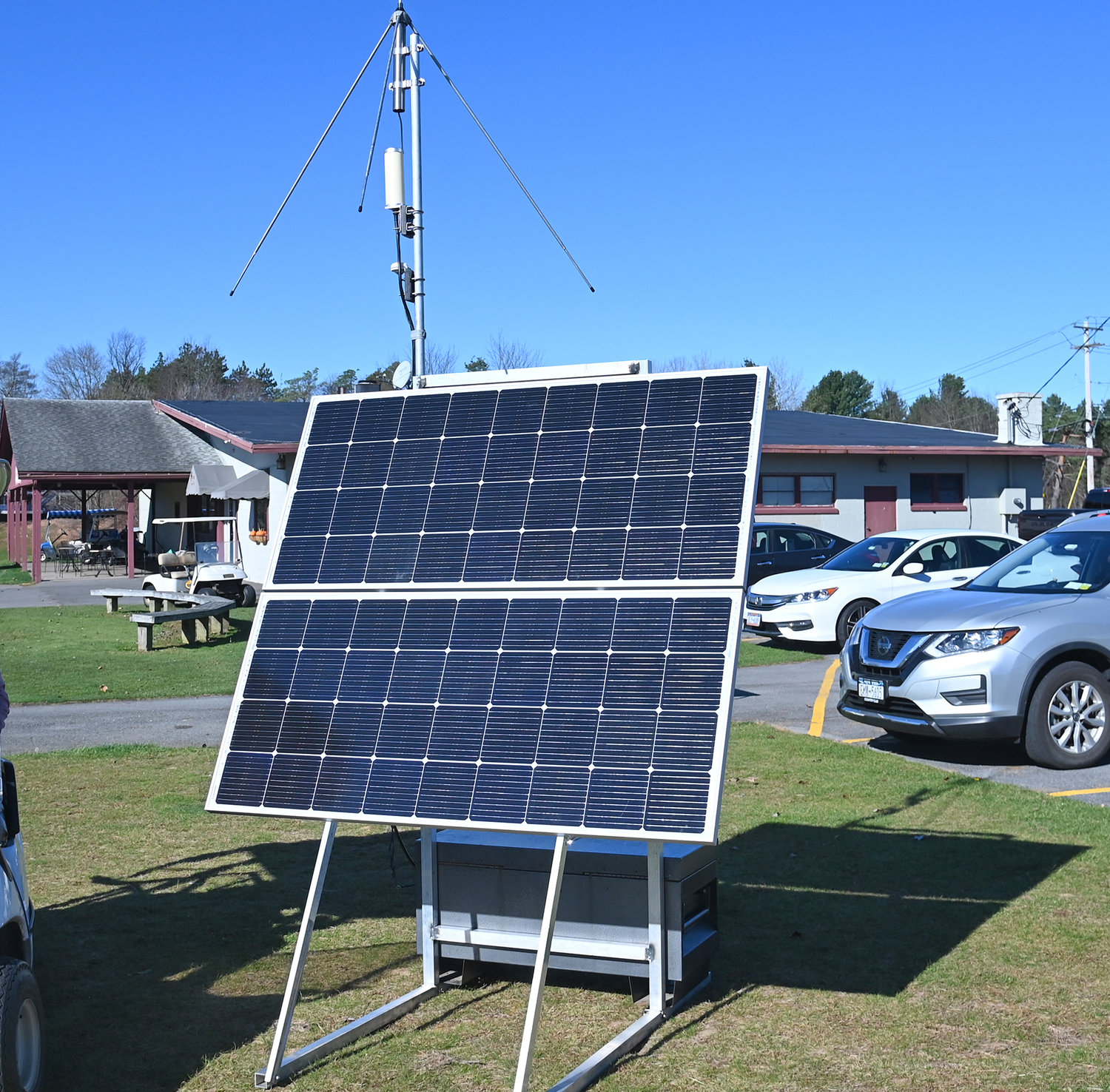 The Lightning Mapping Array has been set up at the Rome Country Club to track thundersnow this winter.
(Sentinel photo by John Clifford)
Posted Wednesday, November 9, 2022 9:01 am
Carly Stone
Staff writer
email / twitter
ROME — Scientists are preparing to study an interesting phenomenon in Upstate New York — thundersnow — a weather event that is hardly par for the course of wintry events.
Lake effect snow downwind from Lake Ontario can provide just the right conditions for electrified snow events in the Tug Hill area, said Vanna Chmielewski, a research physical scientist with the National Oceanic and Atmospheric Administration/Oceanic and Atmospheric Research division’s National Severe Storms Laboratory.
Chimielewski and partner organizations, including the State University of New York at Oswego, Georgia Tech University, Texas Tech University and the National Aeronautics and Space Administration (NASA) have joined forces for project LEE, the Lake Effect Electrification Project, seeking to learn more about the lightning these storms are producing.
Among the questions they hope to answer are:
The study is about to tee off, thanks to the installation of a new lightning sensor at the Rome Country Club, 5342 Rome-Taberg Road, as part of a Lightning Mapping Array operated by the NOAA National Severe Storms Laboratory and the University of Oklahoma.
The sensor “listens” for the VHF radio signals emitted by lightning channels as they propagate through the cloud.
Researchers then use the timing of those emissions at multiple stations to triangulate the lightning channel. This information is used to “see” things like where lightning started in three dimensions, how the lightning traveled and branched in the cloud, and how long the lightning channel is.
There’s a total of 16 of these sensors set up around the Tug Hill area — from Watertown to Rome and in areas east and west — for the season by NSSL and Georgia Tech, Chmielewski reported. The sensors are temporary and powered by solar panels.
“There’s a lot of things that we don’t understand about lightning still. It’s a relatively new field of study since lightning is so very very quick — we’re really waiting on technology to catch up to the point where we can study it better,” Chmielewski said.
In any given year, scientists can expect a dozen or less of these electrified snow events to occur in this region of New York, Chmielewski said. Project researchers are hopeful that the study may begin as soon as next weekend with the first snowfall.
The insights developed through the study may help scientists better predict lightning’s behavior and allow for more accurate weather predictions, Chmielewski said.
Learning about this type of lightning will also help scientists understand more traditional thunderstorms better, too, she said, adding the thundersnow research is the first study of its kind in the area.
While thundersnow is more common in this region thanks to Lake Ontario, it can happen anywhere, Chmielewski said, and Japan is another area where thundersnow is studied.
When the study begins, researchers will also release weather balloons into the snowbands closer to the lakeshore. If people were to catch a glimpse of one, they’d see a balloon about the size of a U-Haul truck carrying various measuring instruments that are bright orange in color. The instruments will be used to measure the electric fields and to observe the type of snow and ice particles contributing to the electrification.
Much like an errant shot off the fairway, researchers will retrieve them where they come down.
The project is funded by the National Science Foundation.