The Oneida Common Council heard from the public regarding the chamberlain’s office and seagulls at Glenwood Plaza before introducing local laws that affect term limits. 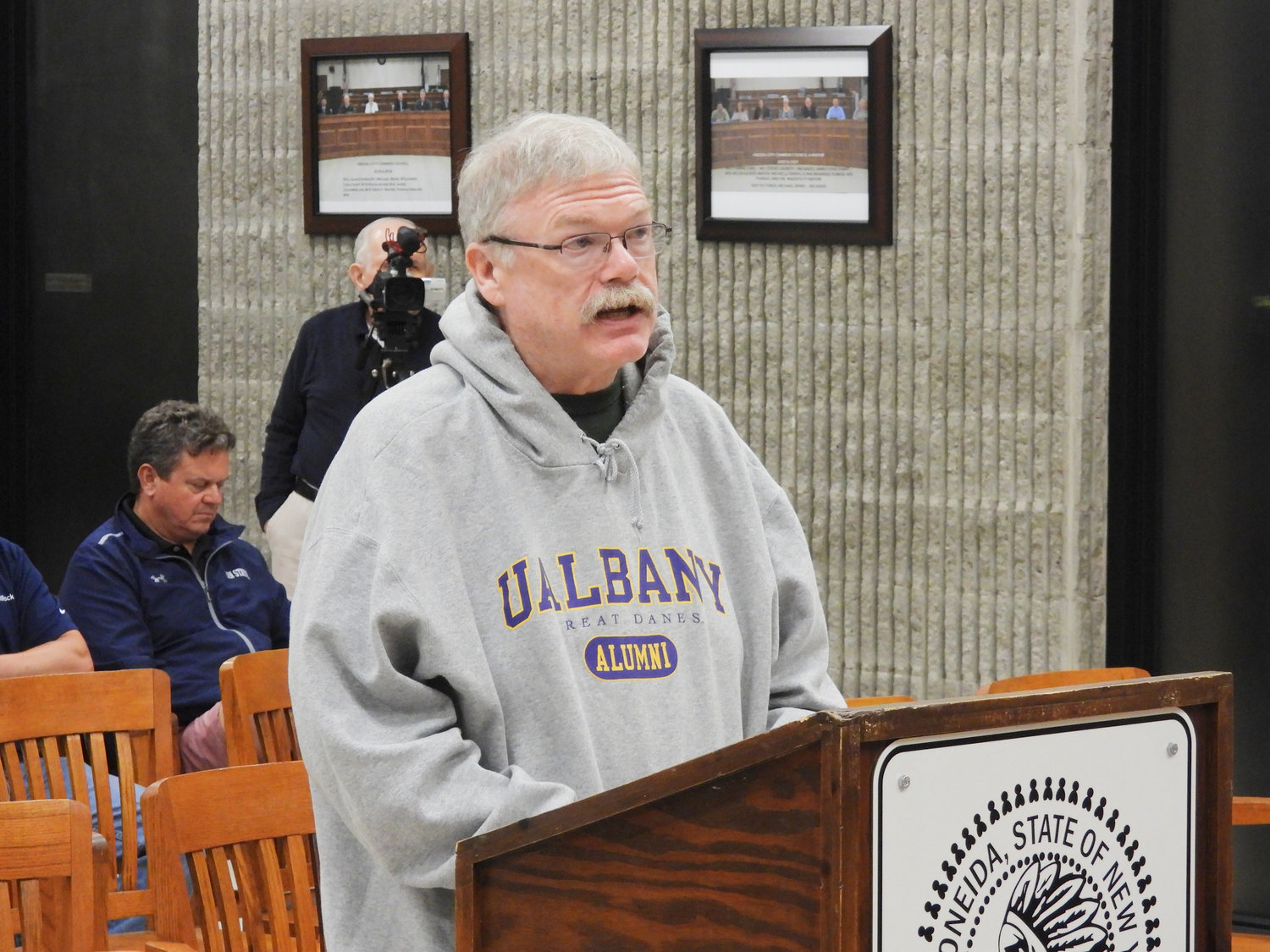 The Oneida Common Council meets on Tuesday, July 5, in the Common Council chambers, hearing from local residents and submitting two new local laws for public hearings at the next meeting. Pictured is John Nichols, who was happy with the city council’s proposal to alter chamberlain’s office and encouraged them to look into a city manager position while the city charter was being examined.
(Sentinel photo by Charles Pritchard) 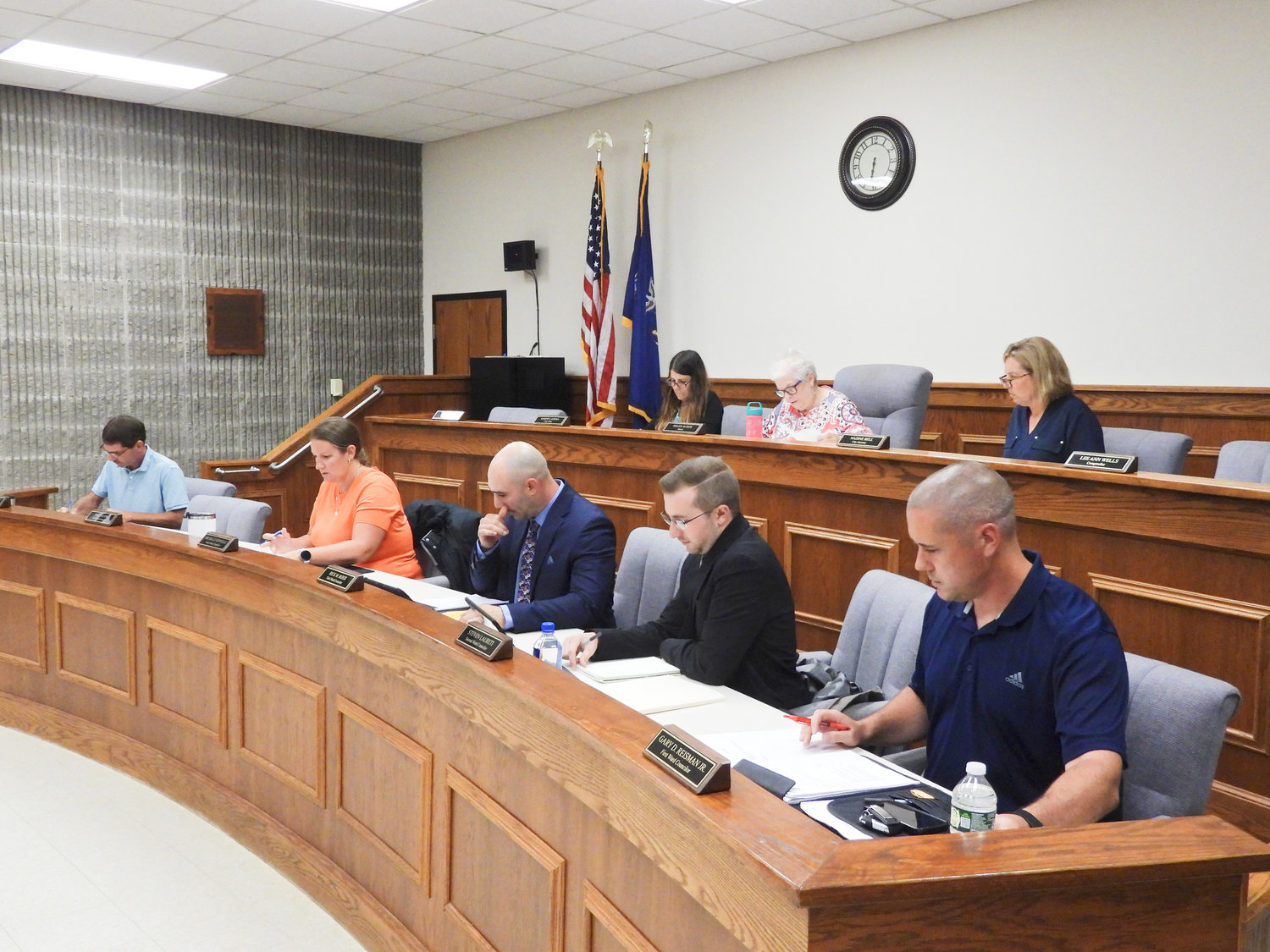 ONEIDA  — The Oneida Common Council heard from the public regarding the chamberlain’s office and seagulls at Glenwood Plaza before introducing local laws that affect term limits.

The office of the city chamberlain has been under scrutiny for the last few years following an incident in which Oneida city residents claimed they paid their taxes but were still listed as unpaid. In October 2021, the city implemented a new software system that requires a three-person security control with a check and read system with reports that must match every day.

The chamberlain’s office was among topics of debate leading up to the 2021 election, with the Common Council discussing the possibility of abolishing the elective office of the city chamberlain. At Tuesday’s meeting, a public hearing was held to amend the charter to do just that.

City Attorney Nadine Bell clarified before the public hearing that this in no way would remove the city chamberlain altogether — just remove it as an elected position.

“It’s to abolish the elected office,” she said. “It’s not abolishing the position. This local law is only intended to remove city chamberlain from the list of elected positions, but the position still exists and is defined elsewhere in the city charter.”

Oneida resident Robert Britton expressed concerns that without an election, the position of city chamberlain would be determined by favoritism. “Who’s in there now is doing an excellent job,” he said. “I’m just afraid that down the road, if we do away with the election that someone can be appointed via favoritism. That’s not fair to the citizens, and that’s not fair to whoever is doing the job now.”

Oneida resident and former supervisor candidate John Nichols said he wasn’t speaking on behalf of any party but as a citizen. “I think there’s a lot of logic with what’s being done, making this position something the council can have a serious search for someone with the qualifications,” he said.

Nichols added that he agreed with the council’s decision to change from two-year to four-year terms for the mayor and the city council. “Otherwise, you spend half your term running for council,” he said. “I hope that as long as the city council is making changes to the charter, I think it would be time to have a city manager whose salary can be tied to grant writing and bringing money into the city, full time.”

The Oneida Common Council introduced two local laws at the meeting which would amend the city charter. The laws increase the term from two years to four years for the city mayor and city council. There will be public hearings for these laws on Tuesday, July 19, at 6:30 p.m. in the council chambers.

The council may vote on both pieces of legislation following the public hearings.

One resident in the audience asked if this would take effect during the next election.

Bell said these local laws require a referendum and will be voted in this coming November election. “[If passed,] it will become effective Jan. 1, 2024,” she said. If the referendum passes, those elected in the 2023 election will have a four-year term.

On the subject of animals in the city, the city is looking to enact a local law to stop people from feeding seagulls at Glenwood Plaza. At the previous meeting, Ward 2 Councilor Steve Laureti brought the legislation forward that would impose a penalty for feeding, harboring, or keeping animals, including but not limited to gulls, pigeons, geese, raccoons, deer, skunks, opossums, coyotes, or foxes. This would not apply to bird feeders. Penalties could be a fine between $100 to $250 or 15 days in the Madison County jail.

Britton spoke again, saying the city council had more important things to worry about than feeding birds or wild animals and that the city should focus on the feral cat problem.

“As far as feeding the seagulls at Glenwood Plaza, they are protected birds,” he said. “Sylvan Beach has seagulls, and you don’t see any of them complaining.”

Eclectic Chic Owner Valerie Pollack spoke, saying she was the one who brought the issue to the attention of Laureti.

“A seagull’s diet consists of fish and other aquatics. Their digestive system isn’t designed to eat French fries and Dollar Tree popcorn,” she said. “Last year, I picked up four dead birds out of the parking lot. They belong in their natural habitat near a body of water, not a parking lot.”

Pollack added the seagulls are nesting on top of Glenwood Plaza, ruining equipment and the roof.

On top of this, the seagull’s diet has caused issues with their digestive systems, causing their droppings to become more acidic. According to Pollack, a guest who drove a soft-top convertible BMW was ruined due to the seagull’s droppings.

“It’s completely ruined the top, and there’s no way to get it off,” she said. “And she has no recourse. She can’t sue me; she can’t sue the Plaza. So they’re causing quite a bit of damage.”