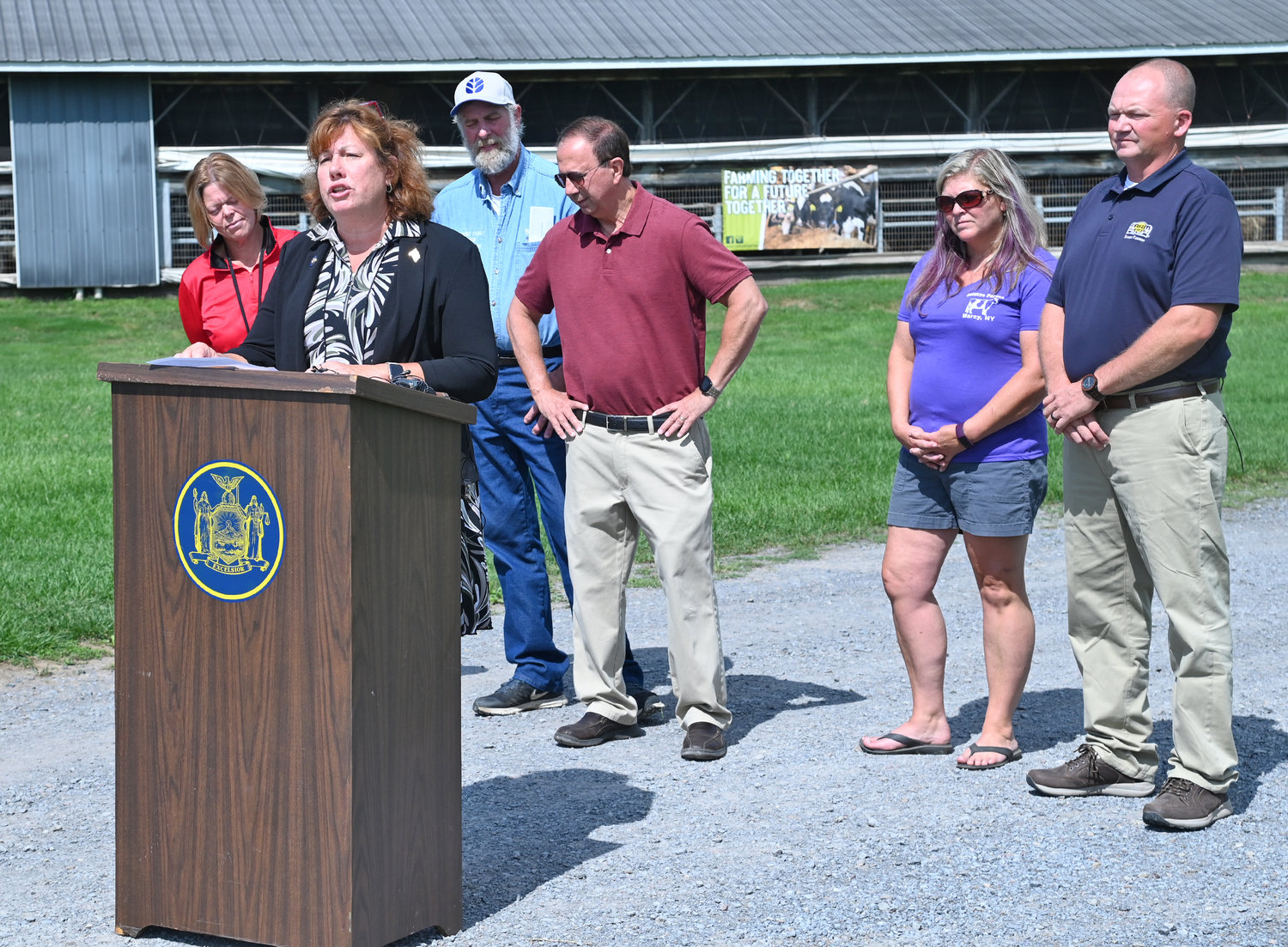 Assemblywoman Marianne Buttenschon, D-119, Marcy, state Sen. Joseph A. Griffo, R-47, Rome, are joined by several local farmers during a press conference discussing a proposed reduction in the farmworker overtime threshold during a press conference on Thursday at DiNitto’s Farm on Benton Road in Marcy on Thursday.
(Sentinel photo by John Clifford)
Posted Friday, September 9, 2022 7:30 am

“We, the farmers, are very frustrated that the executive branch used their opinion instead of hardcore survey information from the agricultural community” to make their decision, said farmer Ben Simons of Steuben. His sentiments were also echoed by fellow farmer Terri DiNitto as well as John Wagner, of the New York Farm Bureau, who also attended the event.

The labor commissioner now has 45 days to either accept or reject the board’s recommendation which was approved by a 2-1 vote. If the commissioner accepts the recommendation, the threshold will be gradually lowered from the current 60 hour threshold over the next 10 years.

The reduction would occur as follows:

The reduction in the overtime threshold is part of the Farmworkers Fair Labor Practices Act that was signed into law in 2019. The law also created the New York Farm Laborers Wage Board, which was tasked with studying overtime pay for farmworkers. It is comprised of representatives from the New York Farm Bureau and the AFL-CIO and a member who is selected by the state Department of Labor.

“I am disappointed by the Farm Laborers Wage Board recommendation to reduce the overtime threshold from 60 hours to 40 hours and appreciate that New York Farm Bureau President David Fisher has come out in strong opposition to this action,” said Griffo. “I recognize and respect the important role that farmworkers play in the state’s agriculture industry; however, this recommendation, if imposed, will have devastating consequences for many farms throughout the state, and sadly, will force even more to go out of business.”

“Running a farm is not like running an office. When the crops are ready for harvest or the cows are in need of care, there is no cut schedule,” Buttenschon said. “For example, we get five days of rain, and once the rain stops, the farmer needs to add additional hours to make up for the lost time. Farm workers understand there is a small window of work opportunity in upstate New York and sometimes that means a longer work week. I have heard directly from our farmers and farm employees, and they want the flexibility to work the hours that are necessary to complete their needed tasks.”

“The final report is not a fair and accurate depiction of the data and testimony gathered during the wage board meetings,” said John Collins, Oneida County Farm Bureau president. “The recommendation to lower the threshold is based more on opinion and will irreparably harm agriculture in New York State and the people our farms employ. It is imperative that the commissioner of labor set the record straight and reject the wage board report and recommendations.”

In a separate press release, Assemblyman Brian Miller, R-101, New Hartford, was also critical of the proposed and called for it to be rejected.

“Family farmers and the whole agricultural industry have been sharing their deep concerns about how the change in the overtime threshold would negatively impact farms and, in turn, upstate New York,” Miller said. “The Farm Laborers Wage Board’s decision disregards the realities of labor needs on a farm which are heavily determined by seasonal and weather factors. Farm workers have even said they benefit and prefer the abundance of work and are concerned that with this change farm jobs will become less available.”

“This decision could raise operation costs by 40%, creating even tighter, unmanageable margins for farmers who are already facing increased prices in fuel and fertilizer,” Miller added. “I urge Department of Labor Commissioner Roberta Reardon to consider the full costs of implementing such a labor policy and how it would detrimentally change the state’s agricultural sector, putting many family farms out of business.”