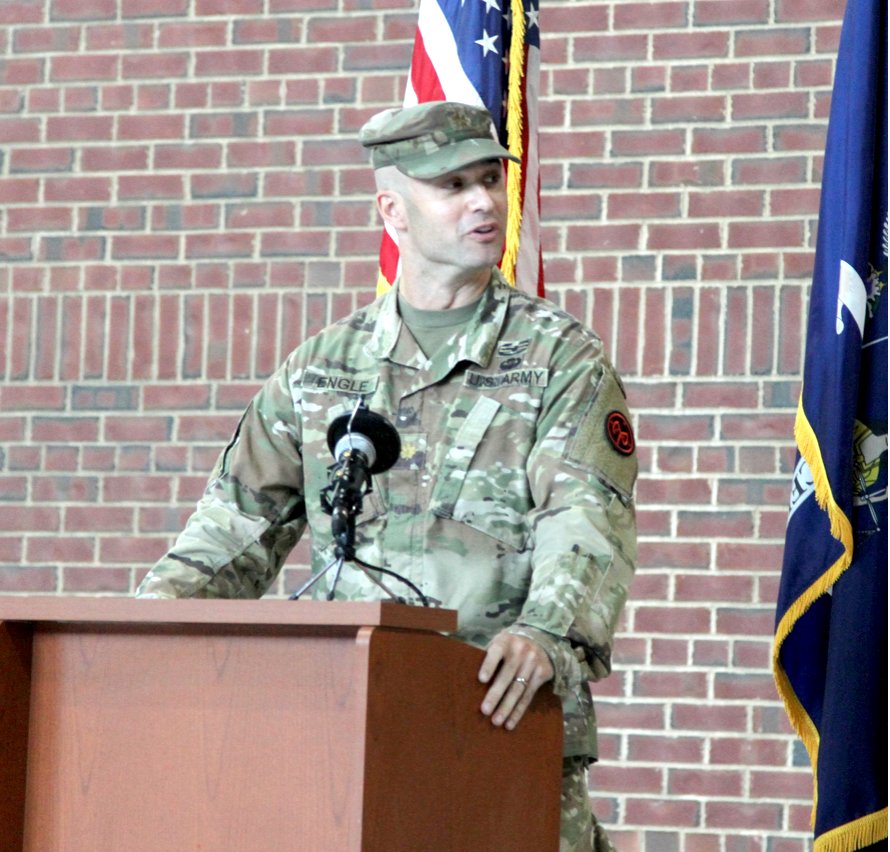 UTICA — Major Frank Engle, a Little Falls resident and a veteran of the war in Afghanistan, took command of the New York Army National Guard’s 2nd Battalion, 108th Infantry during a recent ceremony at the battalion’s headquarters in Utica.

Engle has served his entire career with the New York Army National Guard since his commissioning as a lieutenant from the ROTC program at Siena College in Loudonville.

Engle replaced Lt. Col. Mathew Kilgore, who led the battalion since January 2020. Kilgore now serves as the deputy operations officer as a full-time active/guard and reserve soldier at the Joint Force Headquarters in Latham.

The 2nd Battalion, 108th Infantry is headquartered in Utica and has elements upstate in Morrisonville, Gloversville, Leeds, Ogdensburg, and Ithaca.

Engle served in a multitude of leadership and staff positions, first as an infantry reconnaissance platoon leader with the 2nd Squadron, 101st Cavalry Regiment before commanding Alpha Troop, 2nd Squadron, 101st Cavalry. His command time included a training deployment to the National Training Center at Fort Irwin, Calif., and the state response to Superstorm Sandy in 2012.

After time as a staff officer with the squadron, Engle served as the deputy chief of plans for the 42nd Infantry Division Headquarters before his selection as the operations officer with the 2nd Battalion, 108th Infantry Regiment in 2017. He followed that position as the battalion executive officer.

Engle then served as the operations officer for the 27th Infantry Brigade Combat Team, including the response efforts to the COVID-19 pandemic of 2020-2022.

His most recent assignment was the training branch chief for the New York Army National Guard Joint Force Headquarters.

In his civilian capacity, Engle is a seventh-grade social studies teacher at Dolgeville Central School. Engle lives in Little Falls with his spouse, Michelle Primeau, and sons, Stanley, and Silas.

The battalion has been heavily engaged in the Global War on Terrorism, serving on federal homeland defense duty in the wake of the September 11th attacks and then conducting combat operations in Iraq in 2004 and Afghanistan (Companies A, B and D) in 2007 and 2008. In 2009, the battalion conducted counterinsurgency training with the Royal Thai Army during exercise Cobra Gold.

The 108th Infantry Regiment was first organized as the 3rd Regiment N.Y. Infantry (“Third New York”) in 1898 from several independent companies located in western New York. The Regiment mobilized for duty during the War with Spain in 1898 and served along the Mexican Border in 1916.

Most recently, from March 2020 through July 2022, hundreds of soldiers from the battalion mobilized in response to the coronavirus pandemic, supporting testing and vaccination sites, supporting food distribution or other missions in support of the state Department of Health.

Following the Jan. 6, 2021 U.S. Capitol riot, the battalion mobilized for three months to provide additional security to the presidential inauguration, ensuring the peaceful transfer of power and helping to secure our nation’s Capitol.