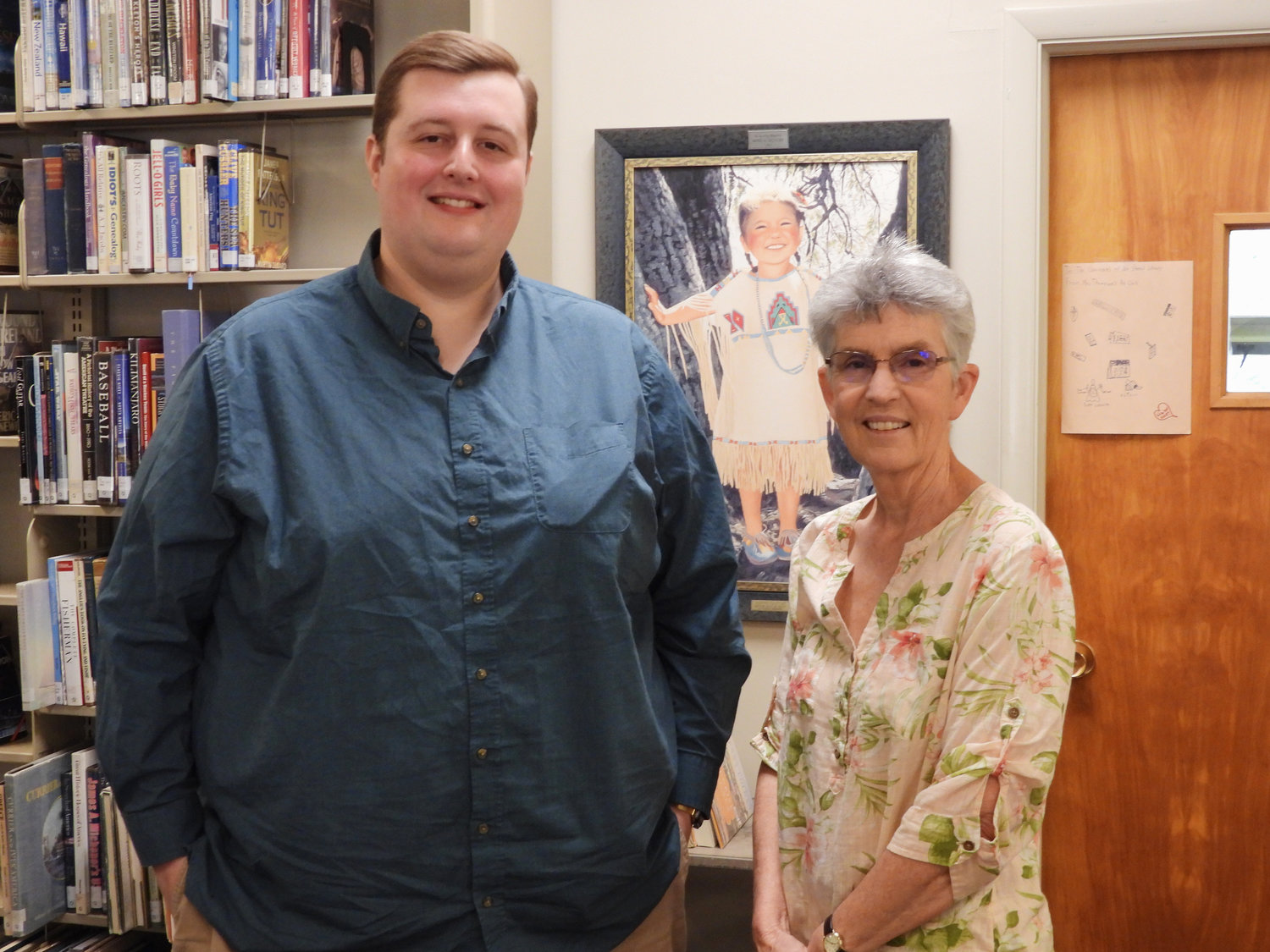 The Sherrill-Kenwood Library is saying goodbye to Library Manager Mary Kay Junglen and welcoming Bill Loveland, who will be the library’s next manager. The public is invited to the Library’s Aloha Celebration and Reception on Thursday, July 7, starting at 6 p.m.
(Sentinel photo by Charles Pritchard) 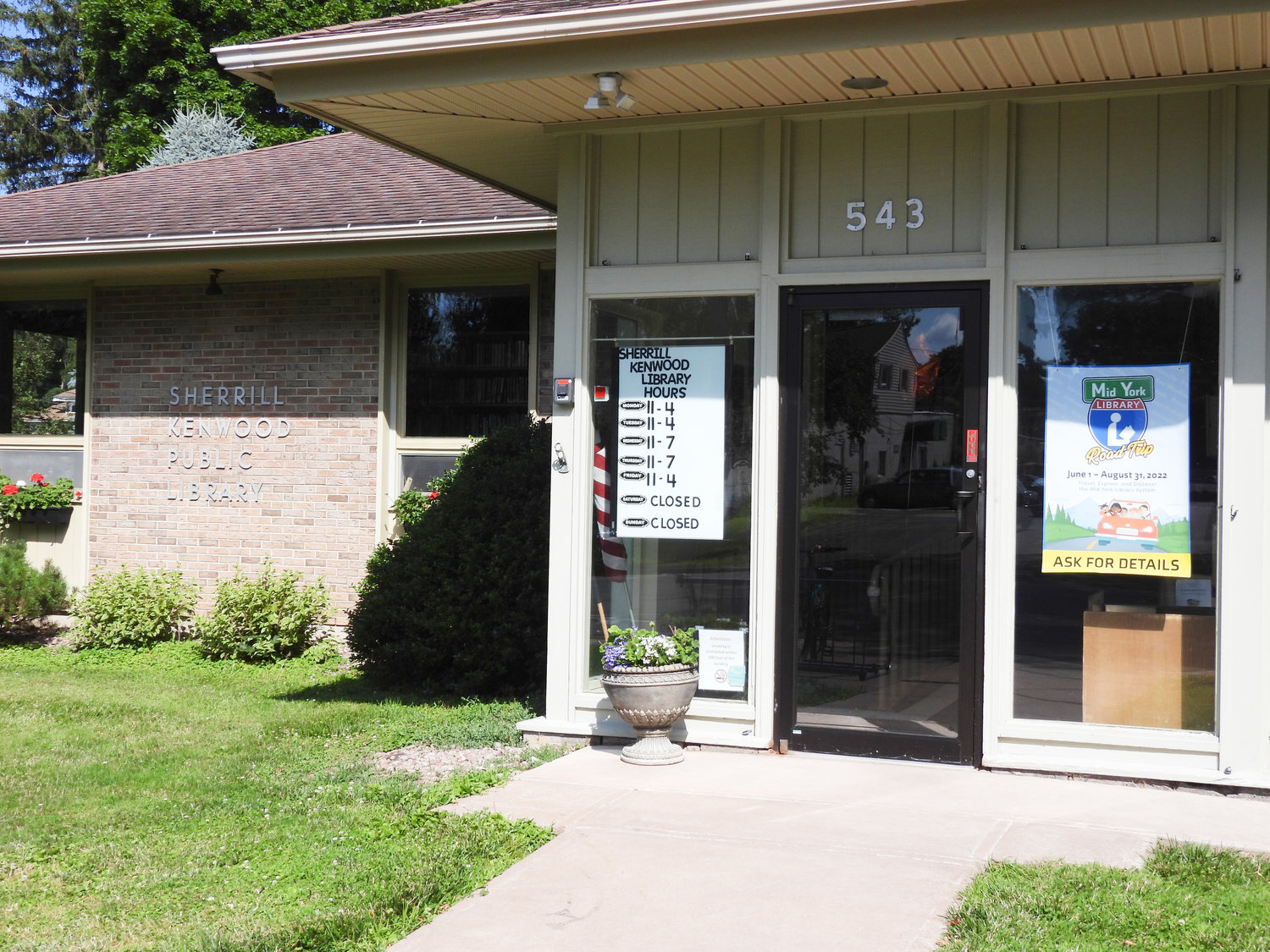 The Sherrill-Kenwood Library is saying goodbye to Library Manager Mary Kay Junglen and welcoming Bill Loveland, who will be carrying on her torch. The public is invited to the Library's Aloha Celebration and Reception on Thursday, July 7 at 6 p.m
(Sentinel Photo by Charles Pritchard)
Previous Next
Posted Wednesday, June 29, 2022 9:50 am
Charles Pritchard
Staff writer
email / twitter

SHERRILL — For nearly a quarter-century, Mary Kay Junglen has been a fixture of the Sherrill-Kenwood Library, 543 Sherrill Road, helping the community access a host of services, materials and programs, including spending the past seven years as the library manager.

Now, Junglen said, it is time for the next chapter for both her and the library — and with retirement arriving, she said she is leaving the facility in capable hands.

“I started on Sept. 11 in 1997,” Junglen said. “I was raised in Ohio and graduated from Ohio State University, majoring in geography. My husband and I moved here as part of my husband’s career.”

“This has been a great job to raise three young children,” Junglen said with a laugh. “I’ve walked to work for the last 25 years and I could hear my children in the backyard when my office window was open.”

When asked why she was retiring, Jungle said she felt it was time. “We’re looking to spending more time with our family and friends,” she said. “Our children and grandchildren all live out of state and it’s time to see them more than just once a year.”

Junglen’s last day is officially Friday, July 1. The Friends of Sherrill Library were planning a celebration for Junglen and all she’s done for the library, but Junglen had a condition. “I didn’t want anything, and I said I’d only agree to have a celebration if we welcome Bill Loveland at the same time.”

On Thursday, July 7, at 6 p.m., the Friends of Sherrill Library invite the public to an Aloha Celebration and Reception. “Aloha actually means both ‘hello’ and ‘goodbye,’” Junglen said. “It’s a wonderful way for the community to welcome Bill.”

“I grew up a block away from Keuka College… and currently live in East Syracuse,” Loveland said. “And I hope to join the Vernon-Verona-Sherrill community soon.”

Loveland graduated from Penn Yan Academy in 2013 before going on to Ithaca College, where he majored in history and minored in sports studies.

“I knew that I wanted to go into public service one way or another,” he said. “I considered law school and library school and ultimately chose library school. I studied at the University of Buffalo and completed my studies there in 2016. I went from high school to a Master’s degree in three and a half years.”

Junglen said it’s an accomplishment that Loveland should be proud of — after all, not everyone can say they got a master’s degree at 21.

Loveland had previously worked at a library software company in the Syracuse area before moving on to Manlius and becoming a public services librarian in 2019. When asked why he applied to work for the Sherrill-Kenwood Library, Loveland said he’s always seen himself working in a more small, upstate town like where he grew up.

“I didn’t know a tremendous amount of Sherrill, but I visited the town and found it idyllic,” he said. “And I love the Vernon and Verona areas around it, too.”

Loveland says he wants to make reach out and make sure everyone in the Vernon-Verona-Sherrill district has access to the Sherrill-Kenwood Library. When it comes to definite plans, Loveland said he still working it out but knows his overarching goal. “This is a library for the residents of the entire school district,” he said. “I’m hoping to build up the digital presence of the library. It’s so much more than the brick-and-mortar building. There are great resources you can get online, like e-books and audiobooks without physically visiting the library. But we’re also investigating ways to bring the library out to the community.”

“I think we’re so fortunate to have Bill join our staff,” Junglen said. “I very strongly believe that he’s the person to take this library to the next level. I know I’m leaving the library in very good hands — no doubt at all. I just hope the community welcomes Bill.”

“I’m committed to giving the same level of service that the patrons of this library love and know and bringing that to the entire VVS community,” Loveland said. “And I’m looking forward to becoming a familiar face at community events throughout the whole area. I’m excited to get started.”

For more information about the Sherrill-Kenwood Library, visit: www.sherrillkenwoodlibrary.org/