The Oneida County Board of Legislators has approved a $51.4 million 2016-17 budget for Mohawk Valley Community College that will hike tuition $124 a year.The vote Wednesday was 23-0. The spending …

MAKEOVER — The appearance of Mohawk Valley Community College’s Floyd Avenue campus is getting a new look with the construction of wings on both ends of the Plumley Complex, the building shown in center. The school says the project will help the college better serve 1,500-plus students annually by adding 48,000 square feet of space and renovating the Plumley Complex. Construction is slated to be substantially complete by year’s end. (Sentinel photo by John Clifford) 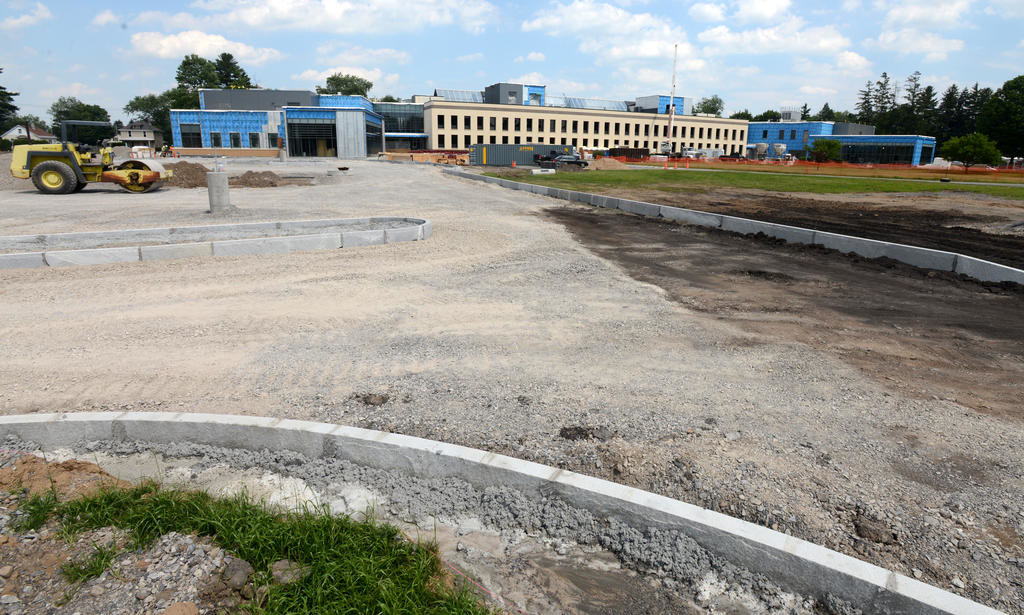 PARKING IMPROVEMENTS — Parking areas on the Rome campus of Mohawk Valley Community College are being substantially rehabilitated and reconfigured as part of a major building project, whose overall price tag is in the neighborhood of $29.2 million. The lawn area in front of the Plumey Complex will be landscaped to create the look of a college quad as well. (Sentinel photos by John Clifford)
Previous Next
Posted Saturday, July 16, 2016 4:00 pm

The Oneida County Board of Legislators has approved a $51.4 million 2016-17 budget for Mohawk Valley Community College that will hike tuition $124 a year.

The vote Wednesday was 23-0. The spending plan, which still has to be approved by the State University of New York, represents a 0.9 percent decrease in expenditures.

The budget anticipates a 4 percent enrollment decrease. Because of the enrollment drop, state aid based on the number of students is expected to fall by nearly $170,000 next year. The spending plan calls for using about $1.5 million from the school’s financial reserves, which is approximately $1 million more than what was allocated from the fund balance this school year.

The MVCC budget calls for no increase in the county’s contribution to the school as its sponsor. The current amount is $7.7 million. However, there’s an additional $100,000 from the county for updating five computer labs on the Utica campus. Also, $125,000 in county dollars will be allocated to support the school’s Achieving the Dream initiative.

The sponsor share does not include what the county pays yearly in interest on bonds for MVCC capital projects, like the current improvements being made at the Rome campus. Typically, capital projects are funded 50-50 between the state and sponsor.

Starting Sept. 1, MVCC’s full-time tuition for two semesters will be $4,084, an increase of 3.1 percent above this past school year.

Tuition at two other Central New York community colleges will be higher next school year than at MVCC.