Legacy rolls on at Skate-A-While-Longer 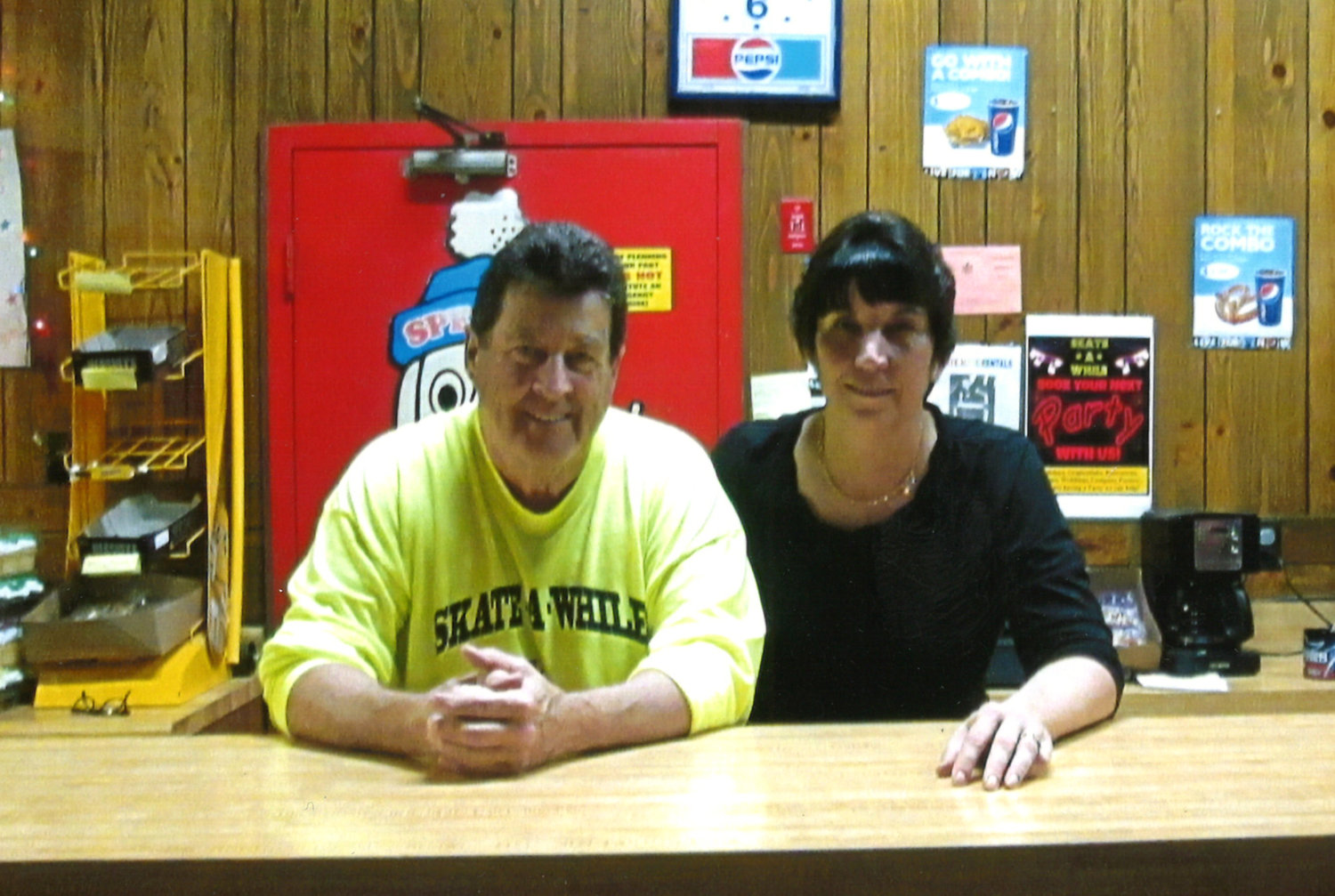 NEXT GENERATION — Earl and Deborah Harris can be seen at the desk of Skate-A-While-Longer on Ridge Street ready to assist customers. Deborah, daughter of original owner Gene S. Tamburino who passed away in 2016, recently announced the sale of the family business.
Posted Thursday, November 4, 2021 12:10 pm
Nicole A. Hawley
Staff writer
email

Skaters at Skate-A-While-Longer, 220 Ridge St., can have peace of mind that the good times will continue to roll, with the business going into new ownership.

It was in 1977 that Gene S. Tamburino’s roller skating rink opened its doors after he built the 162 by 70-foot recreation center in South Rome from the ground up.

His daughter, Deborah Harris, said she appreciates that the family can be passing her father’s business onto someone whose been a long-time customer of Skate-A-While.

Russ Brookins, owner of Time Out Full Service Vending on Turin Road, is the new owner.

Over the years, Harris said the rink has been an “emotional investment,” and that passing the family business onto Brookins is “bitter-sweet.”

“We knew if we sold the business to him, he would continue to run it as a roller skating rink,” Harris said of Brookins.

“Russ has a passion for skating similar to my father, and we love to see my father’s legacy live on, even if it’s not through us,” she said.

Skating was known to “be in the blood” of original proprietor, Gene Tamburino, who spent several years helping his older brother run his roller skating rink in Rome.

Harris recalled her father having a difficult time garnering support to get his rink built in Rome.

In his own words according to a story published in the Daily Sentinel at the time, he said, “Years ago, rinks had an unsavory reputation because they were operated on a part-time basis by transients looking for the ‘quick buck’…Also, in the past, many rinks were associated with roller derbies known for their violence.”

But Tamburino’s passion for roller skating grew the more he got involved in the business with his brother and beyond.

Tamby’s closed in 1949 and since then, “It was always his dream to have a roller skating rink back in Rome,” Harris said of her father. That is why when Gene started building the rink back in 1976, he invested much money and expertise into his state-of-the-art maple floor.

“That’s a 45-year-old floor and it still looks great today. That’s because most of his money went into that floor,” Harris laughed.

Harris said her dad started out as an avid dancer, but in the 1940s skating started becoming popular. Unfortunately that popularity waned about a decade later when bowling became the rage of recreational activities. But with disco music in the late 1970s, roller skating once again celebrated a come-back.

Harris even recalled when roller blades became the “skate to have” and how her dad wasn’t too fond of inline skating when it became the “new thing.”

“He knew he had to give in to the allure of roller blades and adjust with the times, but he didn’t like it,” Harris said. “I know I had to inspect all the roller blades before they were allowed out because I had to make sure they wouldn’t ‘hurt’ the floor.”

When Gene ran the business, he joined the Roller Skating Rink Operators Association of America — an organization that was like “one big family” — fellow rink owners who helped and supported each other.

Customers were also like family, and Harris said there are stories of couples meeting at the rink for the first time who are still together today. At times there would be bus loads of skaters who visited the rink, from Utica and Camden, to as far away as Syracuse and Watertown.

“Everyone had a nickname, and my dad just treated everyone special,” Harris said. She even recalled, with tears in her eyes, all the Facebook messages received from current and past customers when her dad passed in 2016, and when the family announced the sale of the business, that included fond memories of skating at the rink over the years.

Brookins recalled first coming to Skate-A-While back in the late 1980s when he moved to Rome with the Air Force.

“I moved here in 1989 and looked up rinks in the area,” said Brookins, who was already an avid roller skater. “I found Skate-A-While-Longer, and I’ve skated at the rink almost every Saturday since.”

It was about three years ago that the new owner said the Tamburino-Harris family had considered selling the business.

Brookins has owned his own vending business for about 27 years and figured his experience and passion for skating would make an ideal fit as the new owner of Skate-A-While-Longer.

The new owner said he not only plans to preserve the legacy started by Gene Tamburino, but also hopes to expand the business. So far he has added additional arcade games in the gaming room and plans to cook up additional options for the snack menu.

“I brought back some games right away,” he said, adding that some “long-time favorites” are among the selections. There will be new games for the rink as well, such as a longer limbo pole and four corners equipment.

Brookins also has plans to expand the options at the snack bar, in addition to the chips and candy, hotdogs and nachos being offered now.

“I want to try personal pan pizzas and then go from there,” he said.

Harris said she appreciates that Brookins also plans to bring back some “old traditions” started by her dad, including Adult Skate Nights on Wednesdays. The rink also continues to be a popular destination for kids’ birthday parties, and perhaps adult roller derby will still find a home at the rink, she said.

Harris, who just retired in the spring, said she and her husband now look forward to having more time to visit their out-of-state children and will be there to help Brookins take Skate-A-While-Longer to new heights.