TOWN OF LEE — Responding to complaints about speeding vehicles in subdivisions and other locations, the town is buying a portable digital speed sign that can be set up alongside roadways in hopes … 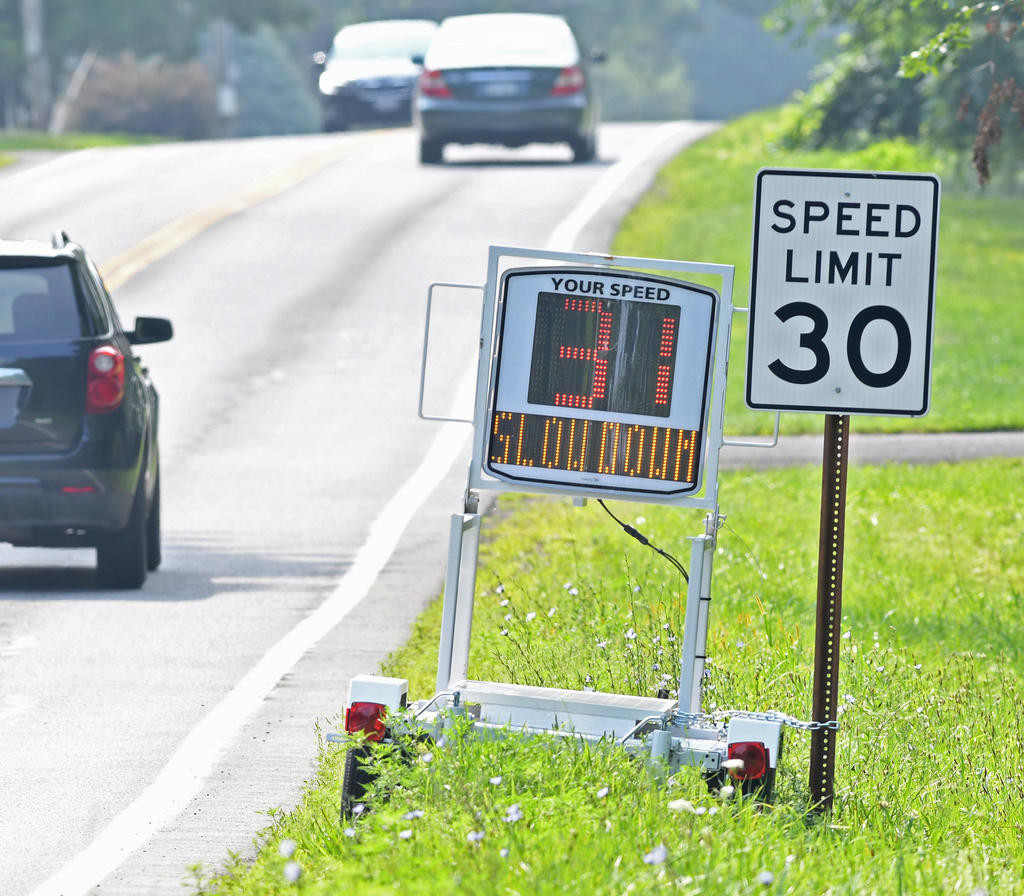 DETERRING SPEEDERS — The Town of Lee is buying a portable radar-speed sign, similar to this device as seen on Jervis Avenue in Rome, in an effort to slow down speeding drivers after getting complaints from residents. (Sentinel photo by John Clifford)
Posted Friday, August 17, 2018 4:01 pm
Dave Gymburch
Staff writer
email

TOWN OF LEE — Responding to complaints about speeding vehicles in subdivisions and other locations, the town is buying a portable digital speed sign that can be set up alongside roadways in hopes of slowing down drivers.

The Town Board on Tuesday night approved pursuing an approximately $3,000 purchase of an Evolis radar-speed sign from Elan City Inc. of Long Island City.

The sign was suggested to the board by town Highway Superintendent William Baker, who referred to “still quite a few calls” from persons in subdivisions such as Delta Terrace regarding “people speeding there.”

The highway superintendent added that the sign would “help slow people down,” and benefit public safety.

Similar signs have been placed around Rome by the Rome Police Department, including Jervis Avenue in Rome as well as on Route 825 on the Griffiss
Business and Technology Park near the Rome Free Academy campus.

For such signs, a digital display indicates the speed of an approaching vehicle compared to a posted speed limit and there also can be corresponding messages on the sign.

For example, Baker said the sign being purchased by Lee can include messages like “slow down” or “thank you,” depending on the vehicle’s speed.

The town last year checked into a resident’s request for road speed bumps in a subdivision to curb speeders, but found that the Cornell Local Roads Program for technical assistance and training did not recommend them in subdivisions because of concerns such as being used as ramps by children on skateboards and bicycles.

The digital signs can “be a deterrent,” said Baker, plus the portable device can “move from development to development”
to help target speeding in
specific neighborhoods or
problem areas.

Baker added, “I think they work,” and board members agreed with the idea.

There are “a lot of places we could put them,” Baker said of the signs.

He said after the meeting that the portable sign to be purchased by the town would be set up in various subdivisions plus other locations where concerns have been expressed, such as Sulphur Springs Road.