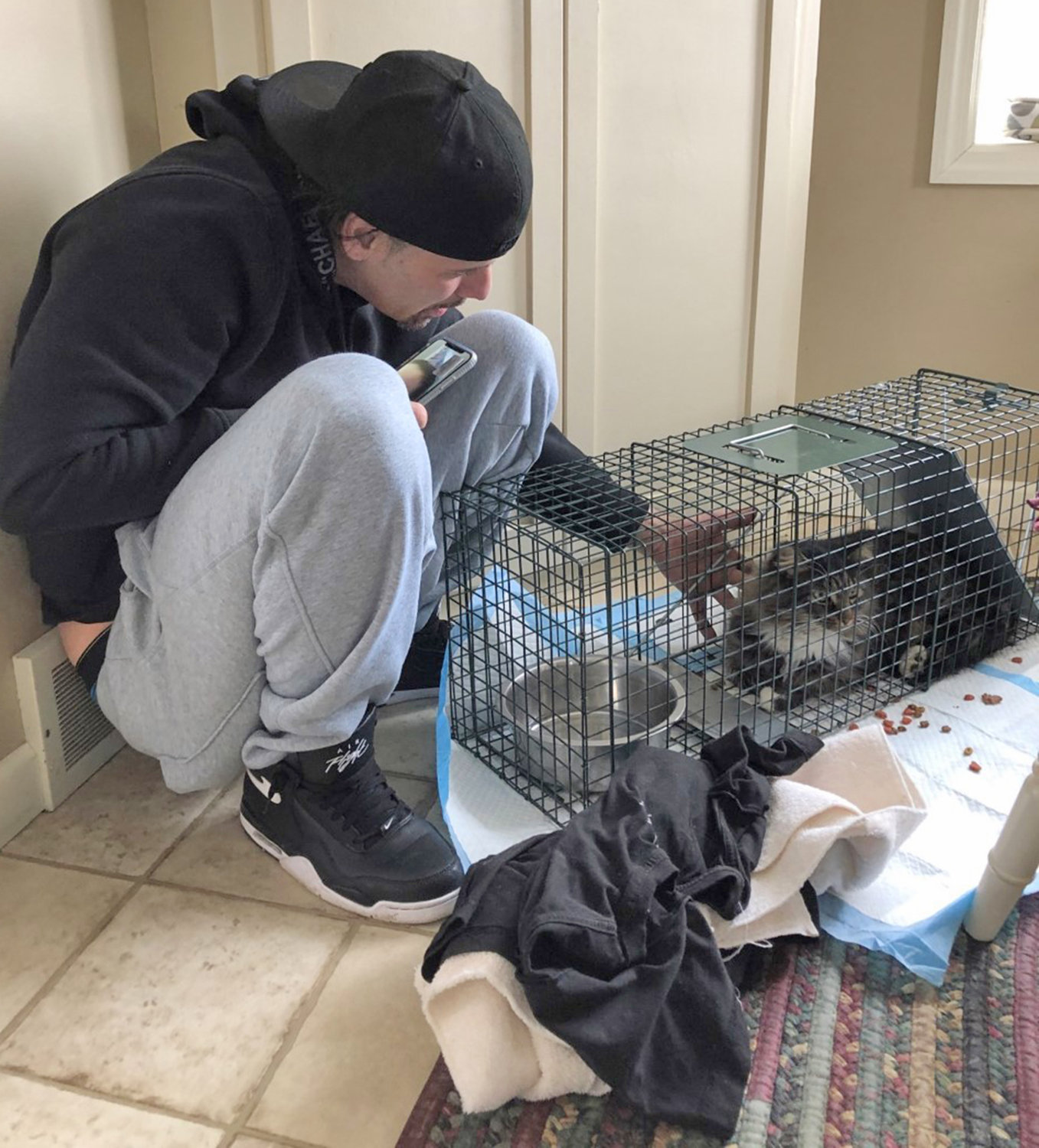 GOING HOME — Benji Pedroza pets his special cat friend, Buddy, after he was recovered outside the Ehlinger home on Laurel Street Feb. 28. The cat had been missing from Pedroza’s Court Street home since before the holidays. Pictured is the T-shirt Pedroza placed inside the trap, hoping his scent would attract Buddy.(Photo submitted) 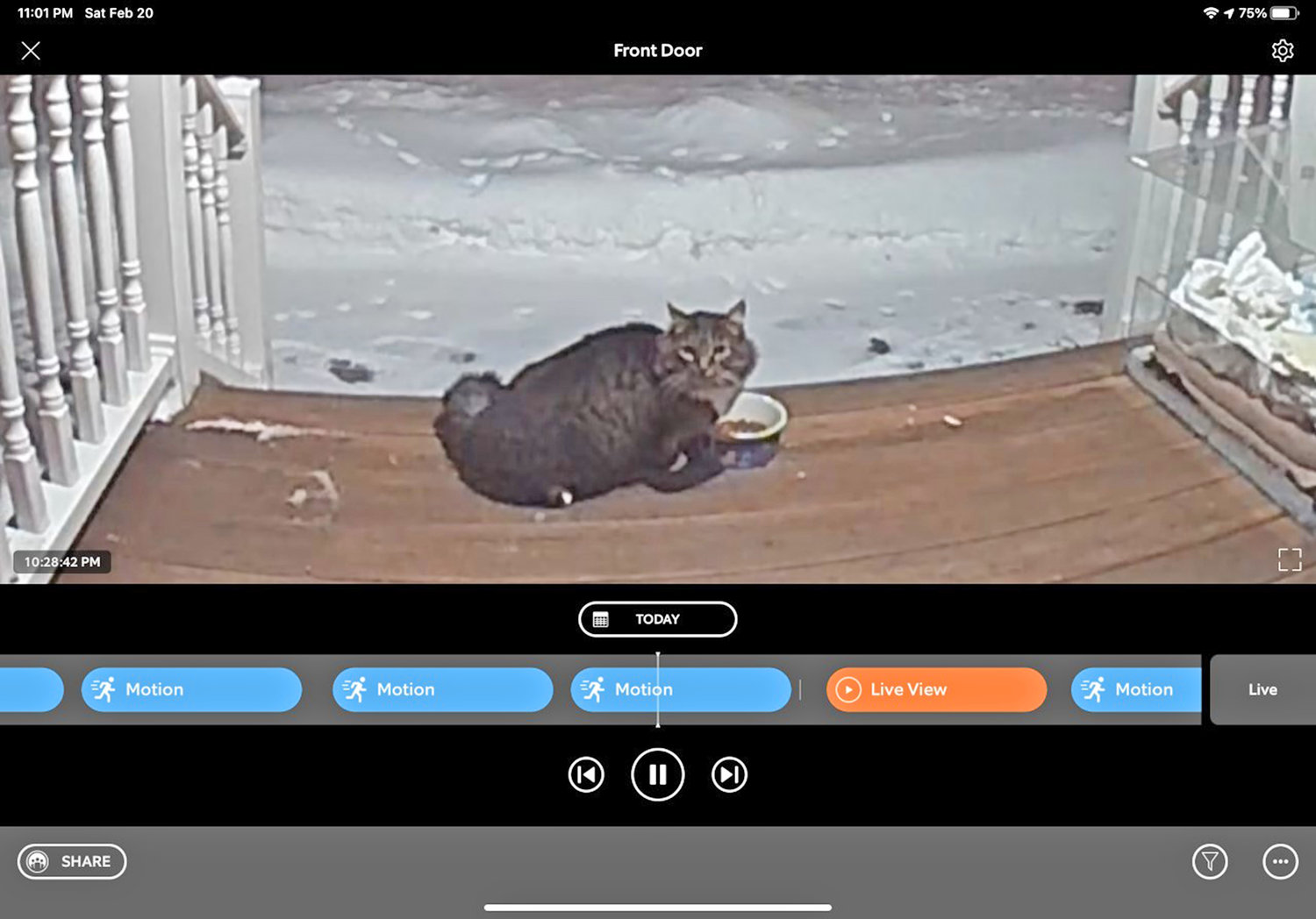 FELINE FOUND — Larry and Patty Ehlinger, of Laurel Street, captured “Buddy” on a camera pointed on their front porch recently when he sought food and shelter from the heated bowls and Plexiglas enclosure left out at their house. After posting this still image on Facebook, Patty Ehlinger helped to reunite Buddy with his real owners. 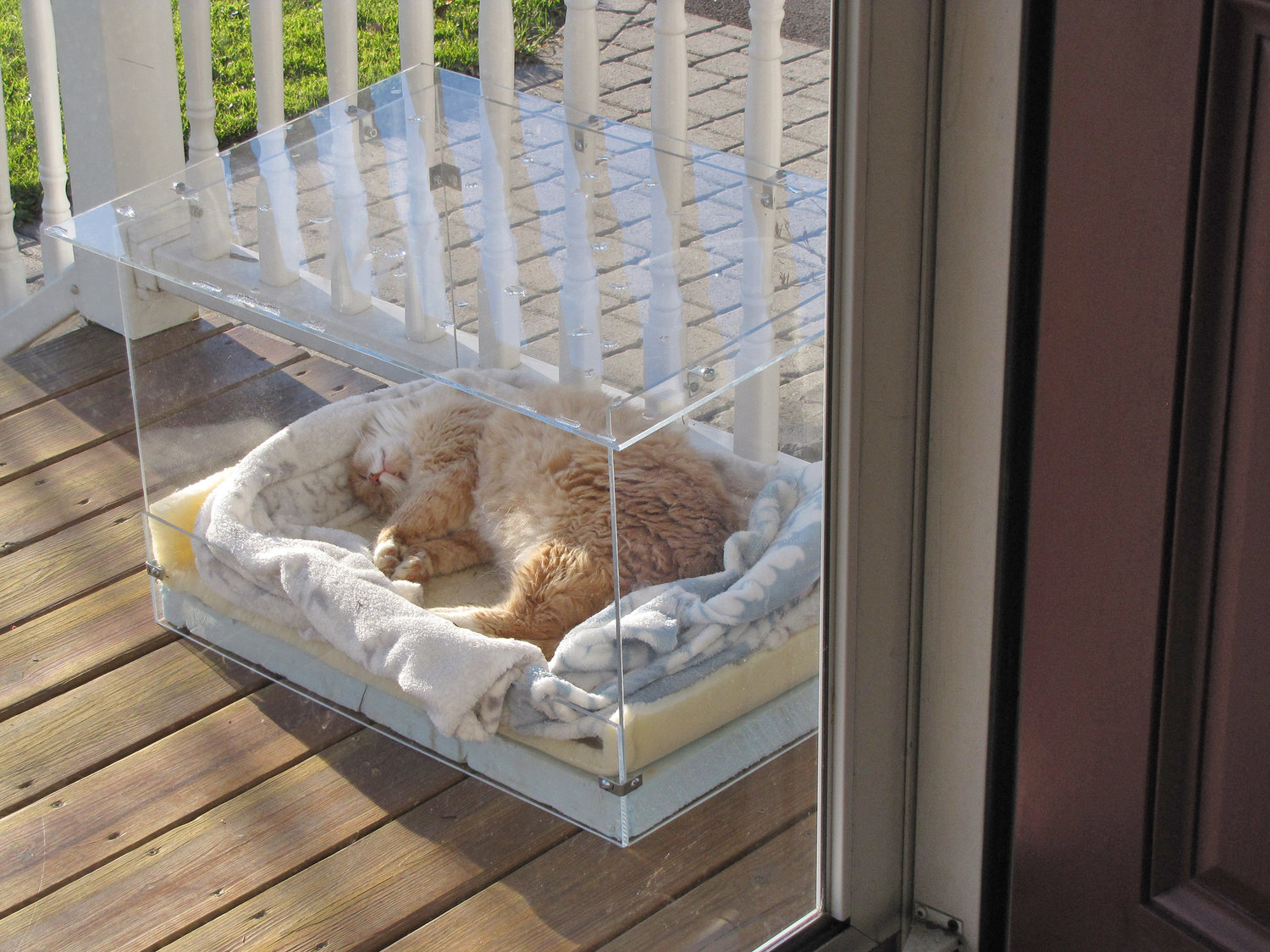 SAFE AND WARM — Cat lover Larry Ehlinger, of Laurel Street, built this Plexiglas enclosure, or “house,” so that his outdoor cat could stay warm and sheltered during the winter. But the house has attracted some other visitors as well. Here pet Buffy is resting comfortably. (Photos submitted) 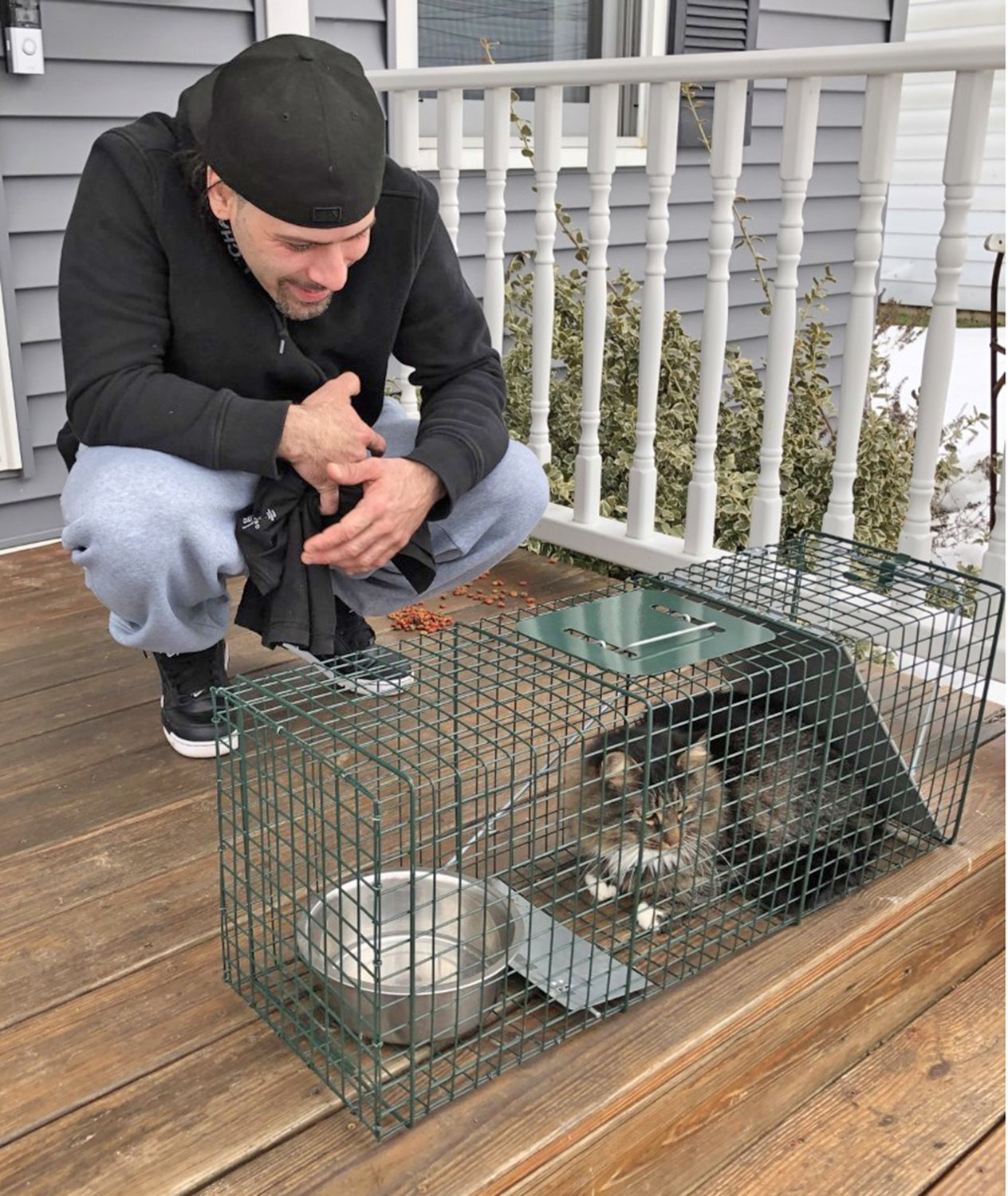 A Laurel Street couple are being hailed for not just helping a poor, furry soul come in from the cold — but in the process reunite the wayward feline and his owner.

Larry Ehlinger and his wife, Patty, of 810 Laurel St., have three cats in their family, with one who appreciates the occasional adventure outside. They have a Plexiglas heated house located on their front porch, along with a bowl of food and a heated water dish for their beloved pet who enjoys going out. The Plexiglas house Ehlinger designed and built himself.

But starting a couple months ago, the Ehlingers began to see a new visitor to their porch house and food dish, who, they would later learn, went by the name of “Buddy.”

“A couple months ago, a gray long-haired medium-sized stray showed up and would feed from the food dish, drink from the heated water dish and occasionally sleep in the heated bed,” the cat lover said. “Around the same time, we acquired a porch camera and caught some photos of this stray.”

He said, “After my wife Patty got a good picture of the stray, she posted the photo on Lost & Found Pets in Rome (on Facebook) and the surrounding area on Feb. 21 at 8:59 a.m. asking, ‘Does this cat look familiar? Laurel Street Rome.’ That afternoon at 12:13 p.m., she received a message on Facebook Messenger from Benji (Pedroza’s) friend, Tiffany, who fosters cats through Clinton Pet Vet owned by Dr. Jessica Price.”

“Tiffany compared the photo Patty had posted to a picture she had of Buddy, and was almost 100% sure they were the same cat,” said Ehlinger. “She asked if they could come by that evening to set a trap, which they did.”

Pedroza said he was quite excited and even put one of his T-shirts inside the trap in hopes that Buddy would remember and be attracted to his scent.

“Every night for a week we set the Have-A-Heart trap, but sprung it before we went to bed around 10 p.m., because we feared a skunk would wander into it,” Ehlinger said. “We learned that the cat was coming late at night so if we were going to be successful, the trap would need to be set all night long. I studied YouTube videos on how to release a skunk without getting sprayed and felt confident enough to keep it set all night. Skunks don’t fully hibernate, but come out on warmer nights during the winter. I wanted to be ready just in case.”

That first time the trap was set all night is when Buddy was finally caught at 2:45 a.m. Feb. 28. Later that day, Benji was reunited with Buddy.

“We were involved in a wonderful reunion between a beloved cat and his grateful owner,” Ehlinger said. “Before Christmas, Benji walked for hours around his neighborhood in search of Buddy and eventually posted flyers, but to no avail.”

Pedroza explained that Buddy actually belongs to a friend and their family, and while caring for him, the cat somehow escaped from his home. But while caring for Buddy, Pedroza said he “fell in love” with the cat and was heart broken when he couldn’t be found.

Last Sunday, “as soon as he (Buddy) saw me, he knew who I was,” said Pedroza. “I was fully in love with this cat and knew I had to get him back.”

Pedroza said he is grateful for the Ehlingers’ help in recovering Buddy, and has even sent Patty Ehlinger some photos of his feline friend showing how happy he is to be home.

“He was reunited with my friend’s family and got to play with the kids and the dogs, so he is very happy,” Pedroza said of Buddy.

Buddy was the second cat the Ehlingers have rescued thanks to Larry’s homemade Plexiglas house.