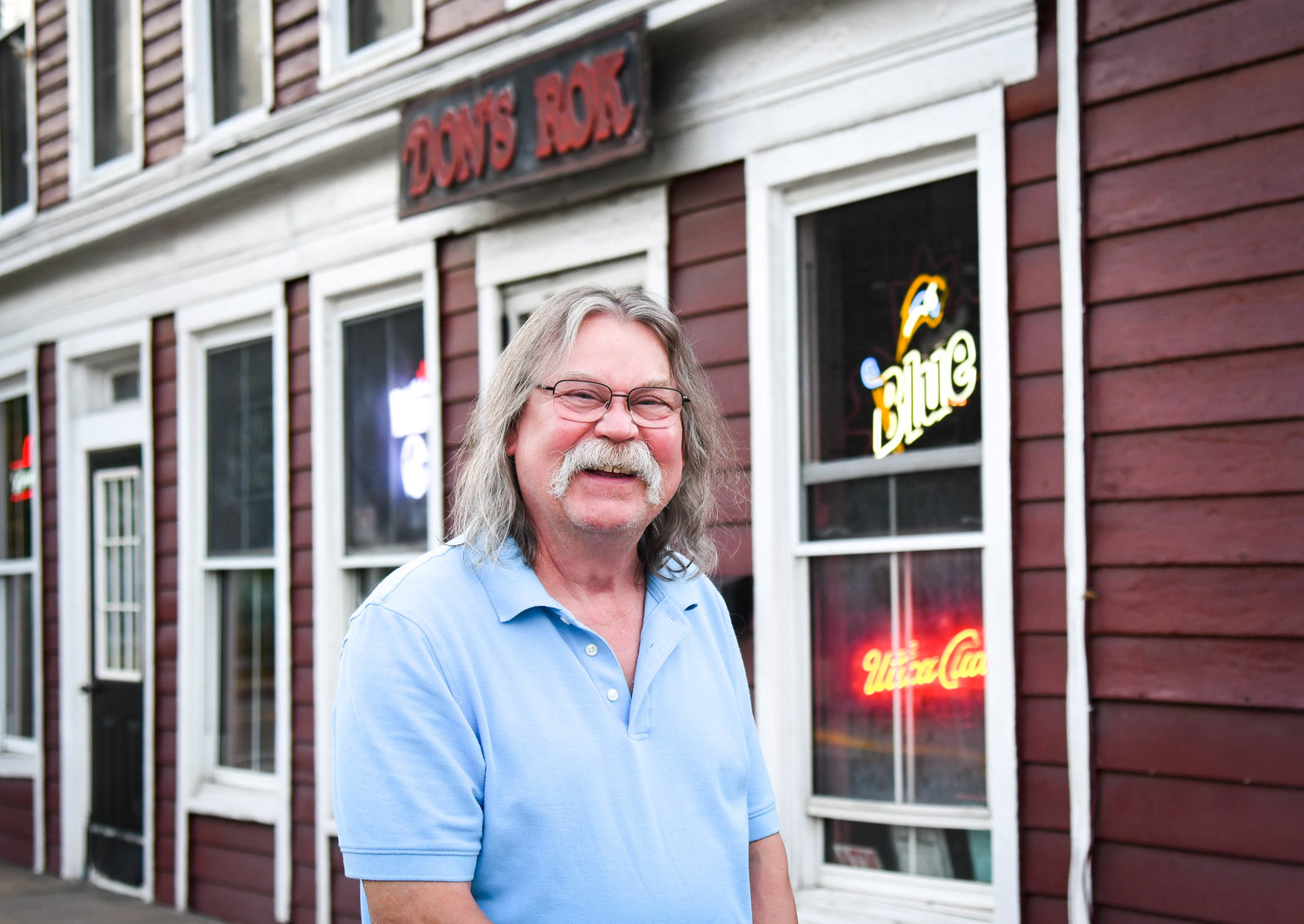 Mark Smith, owner of Don’s Rok in Clinton, recently announced that his bar is not closing, but the 36 College St. building is up for sale. Smith hopes to retire with his wife by the end of the year.
(Sentinel photo by Alex Cooper)
Posted Wednesday, June 15, 2022 6:10 am
Nicole A. Hawley
Staff writer
email / twitter

CLINTON — It’s time for more time — with family, traveling and out on the golf course as Mark Smith, long-time owner of the historic Don’s Rok establishment at 36 College St., looks forward to retirement.

Smith said while the long-time local watering hole isn’t closing, the building is up for sale so he can move on to the next stage of his life.

“I’d like to be finished and have the building sold by the end of the year, because that’s when my wife will be retiring,” he said. “Relaxing and playing golf will definitely be part of what I’m doing.”

The College Street building hit the market on Friday.

Being a history buff himself, Smith enjoyed sharing some back story about the long-time bar that goes back to as far as the turn of the 20th century.

“Don’s Rok has definitely been around,” Smith quipped.

Originally a grocery store, the building has changed hands on many occasions and Don Burns was the first owner to turn it into a bar. Being the original bar owner, that is where the “Don” in Don’s Rok comes from, Smith said.

Previous owners “had given the place a bit of a nickname — the Rok,” Smith explained. “This place has been doing what it’s been doing now for more than 120 years. I was cleaning up the place one morning, and there was a woman standing there, waiting to come in the front door. I let her in, and she told me how her grandfather used to run the place. She looked around and we talked a bit, and she gave me a photocopy of a liquor license renewal that was from 1904 or 06. This place had been serving ‘adult beverages’ since close to the turn of the 20th century.”

Even during prohibition, today’s Don’s Rok was “still doing what it’s doing now,” said Smith, adding that according to Clinton Courier newspaper archives, the owner of the property during prohibition had been cited with a violation. Before Don Burns bought the establishment, it was known as Pierce’s Tavern in the mid-1970s. And before that, the bar had been known as The Shamrock, and that’s how the abbreviated “Rok” eventually got to be part of the bar’s name, Smith recalled.

Smith was originally from the Buffalo area before he arrived to Clinton in 1972 as a Hamilton College freshman. He would soon learn the popularity of the establishment among his fellow students.

“All the freshmen were given a desk blotter full of advertisements, and one was for Pierce’s Tavern and I looked on the bottom of the ad, and it said, ‘Call it the Rok,’ but I didn’t quite understand at the time,” Smith reminisced.

Fast-forward to the late 70s, and the unemployment rate was very high in Buffalo after Smith graduated from Hamilton, so he decided to stay in the area.

“I figured I would stick here and see what I could find — it was an emotional investment, I guess,” the bar owner said.

And because he often frequented the bar as a student, “I started to work part-time here as a bartender,” Smith remembered. “I worked hard and gained more responsibilities, and when Don Burns was impressed with my work ethic he asked me when he was finished, if I’d be interested in running the place, and I said, ‘I certainly would.’”

Unfortunately Burns would pass at a young age from cancer, Smith said, and he continued working at the bar for Burns’ wife.

“Then she asked when she was ready to get out of the business, if I would take it, and then the opportunity was finally given to me,” Smith said.

The special memories over more than three decades of Don’s Rok ownership are too numerous to count, Smith said, but there are some unique circumstances that seem to stick out.

“In the 70s, before I was the owner, we’d get streakers who ran in and out of here,” he laughed. “At one point in the early 80s, we had people who brought a horse with them — they just strutted into the front door. We had to tell them we couldn’t have the horse in here, and we tried to have them go through the back door, but the horse wasn’t going through that door. We were finally able to encourage him, and we had some cleaning up to do afterwards.”

The locally-famed Don’s Rok is now for sale at $349,000. There’s still pool and foosball tables inside, along with a dart board, and the upstairs has been renovated to become an office space or apartment.

Smith said he hopes to have a buyer for the building by the end of the year. He and his wife plan to travel more and visit with their adult children and new 3-month-old grandson who live out-of-state.

“I’m looking forward to more golf, and I’d like to travel to some historic sites,” said Smith. “I spent 34 years as owner of Don’s Rok, and over 40 years working here seven days a week. I just need to find something that will take up 70 to 80 hours a week of my time.”