While many of us welcome the break from snow shoveling, the recent cycle of thaws and rain has left many people frustrated and others worried about their livelihood. Snowmobiling is a major form of … 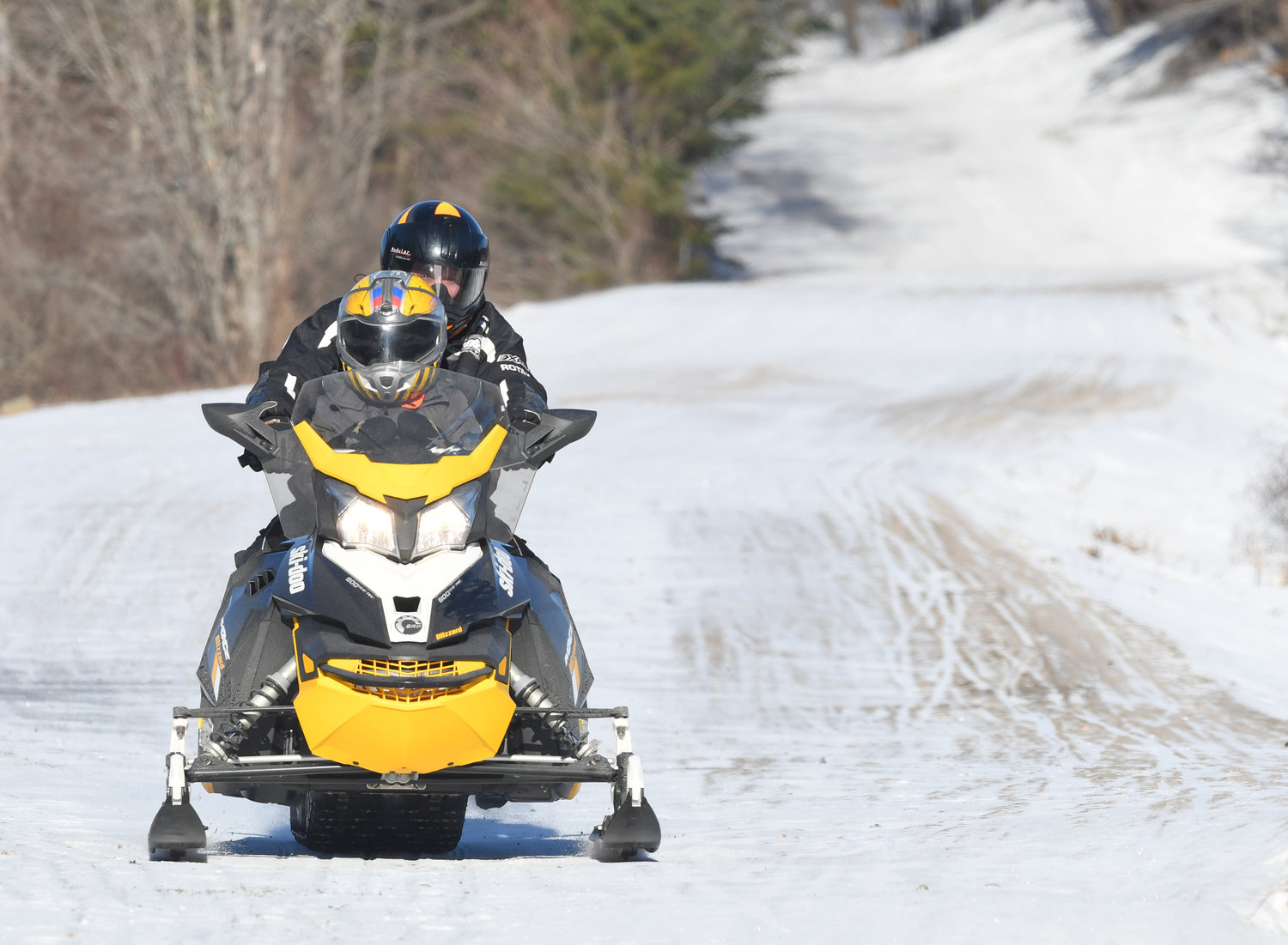 MAKING THE BEST OF IT — A lone snowmobile makes its way south on North Street in Old Forge Wednesday. The lack of snow is hampering the winter past time in the north country, but trails in the Old Forge area have kept a minimal but ridable base through recent thaws. Those in the vital snowmobile industry are encouraged by forecasts of more seasonable weather.
(Sentinel photo by John Clifford) 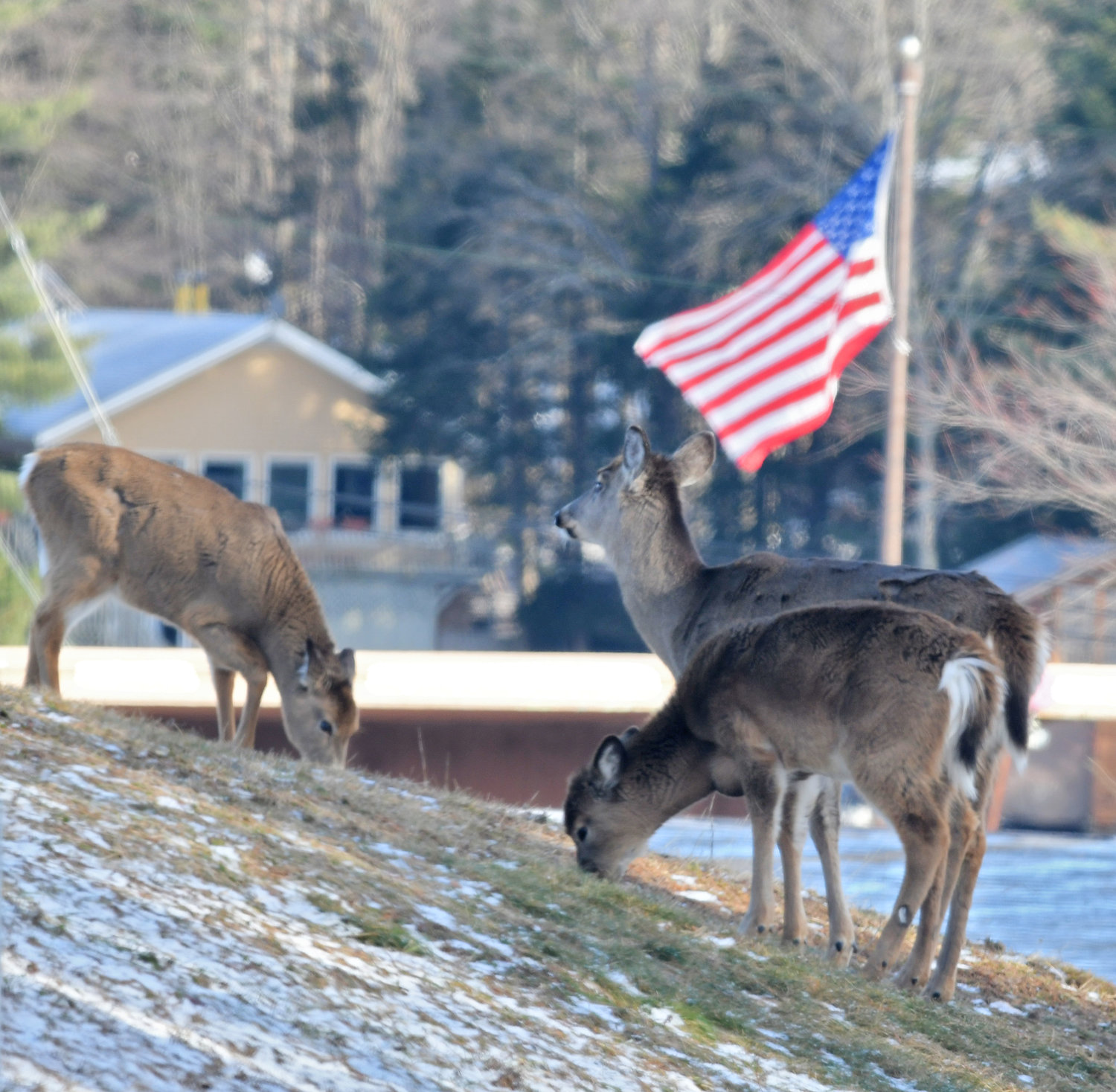 PATRIOTIC DEER — A trio of deer much on an open grassy area with a flag nearby in the village of Old Forge Wednesday afternoon.
(Sentinel photo by John Clifford) 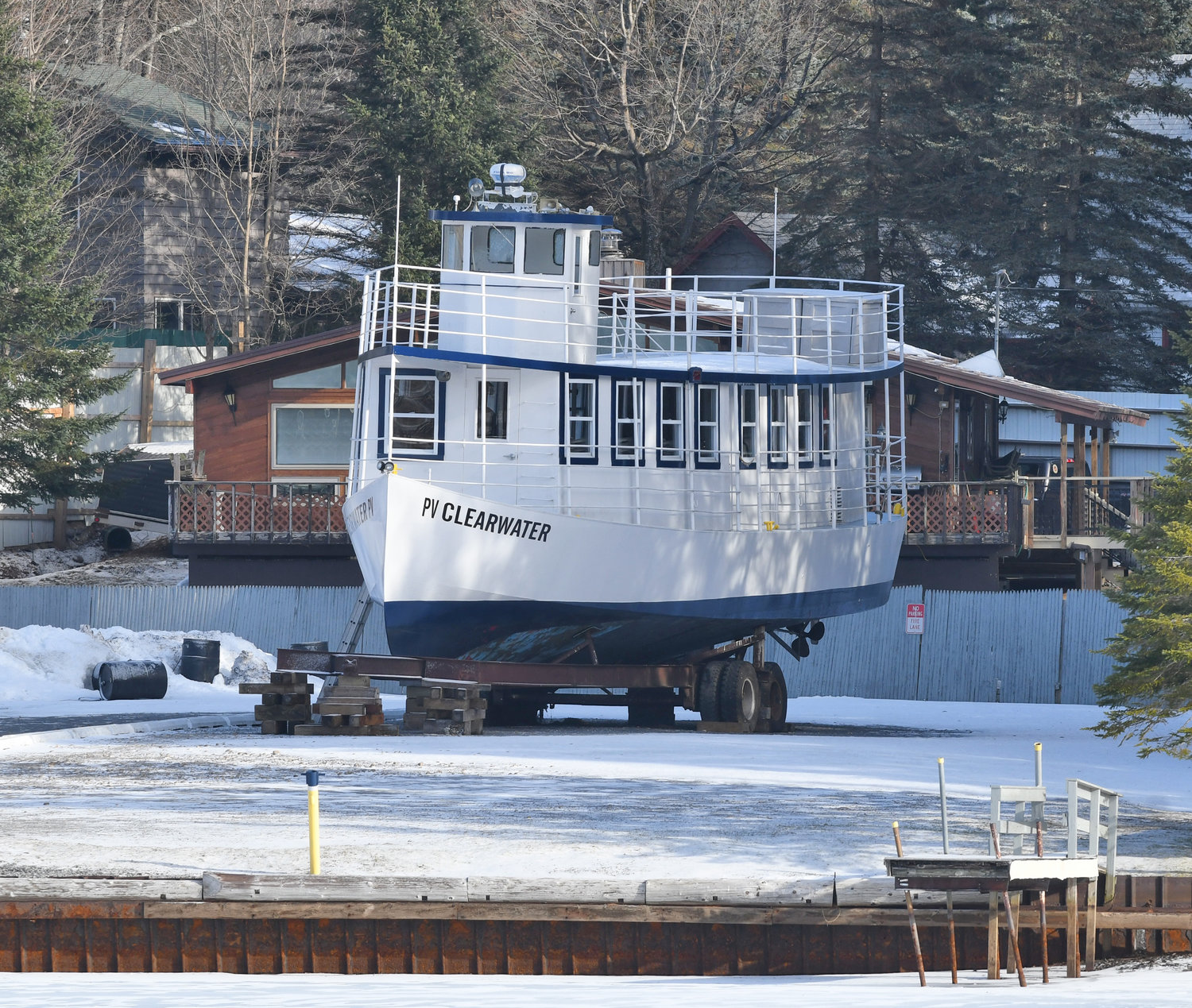 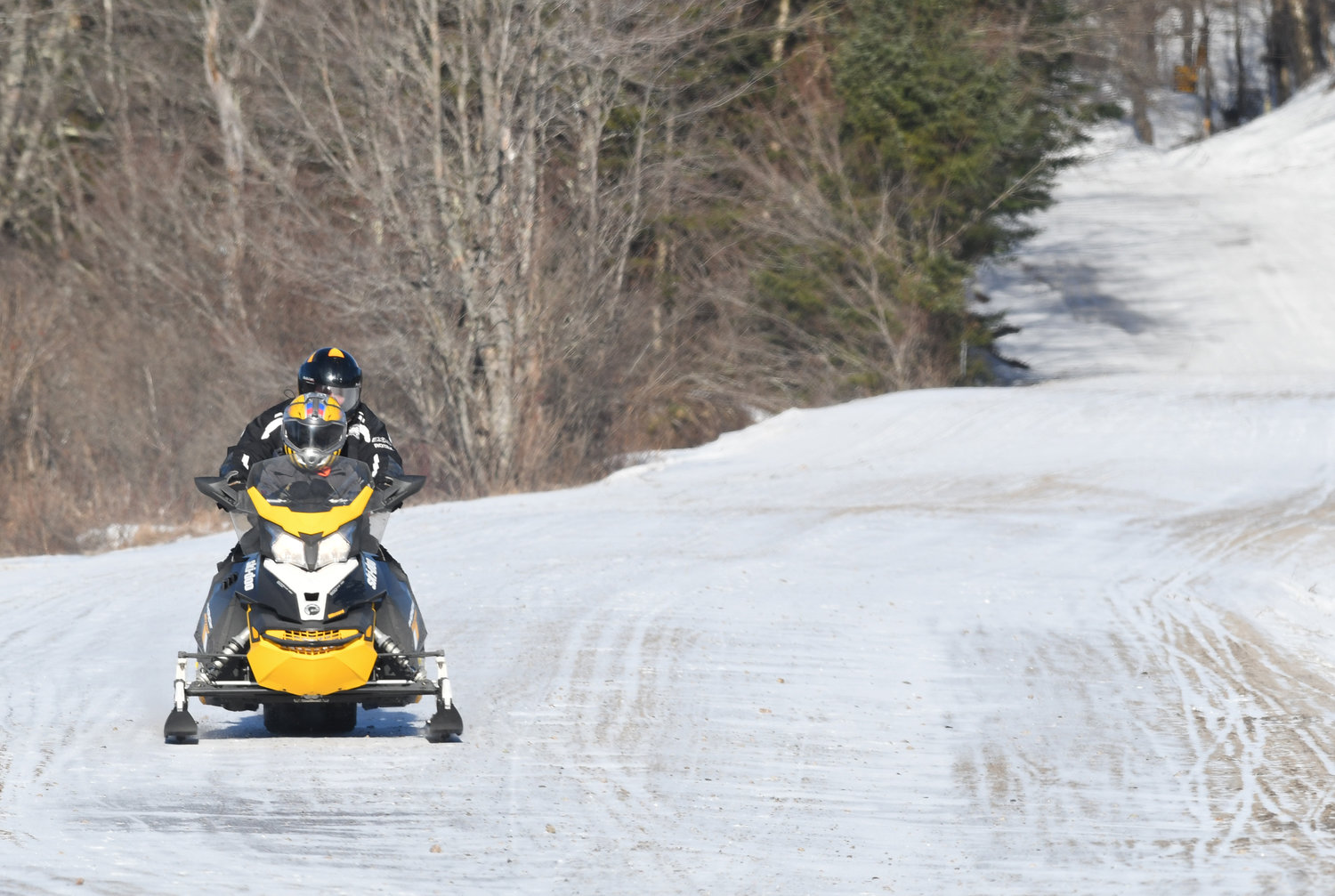 A lone snowmobile makes its way south on North St. in Old Forge on very a thin icy trail. A lack of snow is hampering the winter past time in the north country.
(Sentinel photo by John Clifford)
Previous Next
Posted Thursday, January 3, 2019 11:54 am
David Hill
Staff writer
email

While many of us welcome the break from snow shoveling, the recent cycle of thaws and rain has left many people frustrated and others worried about their livelihood.

Snowmobiling is a major form of winter recreation and a bedrock of the seasonal economy in communities in northern Oneida County and beyond, so when rain and warm weather wipe out the snowpack, mood and the bottom line suffer.

Trails in some locations had held enough snow for riding through last week, particularly in the Tug Hill Plateau and the Adirondacks, only to have last Friday’s rain do those in, Rolf said. Now, if you ask Rolf where there’s good snow, he’ll say Minnesota, upper Michigan, northern Ontario, Quebec. The snowmobile association recently rolled out an interactive map of New York’s snowmobile trails that shows what’s open, but it’s almost too depressing to look at now.

A few inches overnight Wednesday to today helped, but the base has been obliterated in most spots.

The Tug Hill generally has a bit of a base left, so fresh snow could get that back in play, but for the most part it takes at least a good two feet of snow. Lake-effect is nice but heavy, dense, wet snow helps rebuild the base better. Steady cold weather would help freeze swamps, Rolf said.

“You hold out hope that it’s gonna change soon. And that’s all we can do at this point.”

Rolf said he’s urging riders to continue to patronize restaurants, taverns and others who depend on snowmobiling in the winter even if they can’t ride to them.

For most snowmobilers, the lack of adequate snow is disappointing and frustrating, but it’s still just recreation. For people in the tourist trade in certain communities, however, the blowtorch weather costs money.

The importance of snowmobiling on the northern New York economy is well established. A 2011 survey of snowmobile owners in the state estimated total direct spending by snowmobile owners to be $434 million, and with an indirect multiplier factor considered conservative, that led to $868 million in spending in the industry.

“Snow sports are huge to us,” said Tara Silliman, front-desk agent at the Lodge at Headwaters in Boonville, where snowmobile trails cross the property and a webcam tracks conditions. “Downhill skiing, cross country skiing, mainly snowmobiling, but skiing as well.”

The hotel has had 30 to 40 reservations cancelled in the past few weeks, Silliman said. That followed many who had made plans to visit and enjoy the snow after an unusually snowy November prompted interest.

The lodge has also lost reservations among cross country skiers, many who travel from afar to use the trail complex maintained by the Black River Environmental Improvement Association in and near Boonville, Silliman added. Some visitors also patronize downhill ski areas such as Snow Ridge, Woods Valley and McCauley Mountain. But snowmobiling is the biggest draw.

The winter is young yet, however, and snow-related events are still scheduled. A highlight of the winter in northern Oneida County is the Boonville Snow Festival II, which has filled the lodge.

The festival is Feb. 1-3 at the Boonville Oneida County Fairgrounds. Cold weather is necessary to prepare the track for a highlight of the fair, snowmobile races, as the course is made of 12 to 18 inches of ice built for the event, fair president Tony Pettinelli said. Given the right conditions, the track can be built in about a week by the volunteers who do the work, but it’s better to not have to build it at the last minute, Pettinelli said. Also, a spectators’ grandstand is typically made from snow.

Farther north and east, the communities around the Fulton Chain of lakes may be even more dependant on snowmobiling, but so far they are holding their own, according to Mark Farmer, tourism director for the town of Webb.

Farmer said the trail network maintained by the towns of Webb and Inlet, across the Hamilton County line, is still rideable thanks to maintenance by the towns’ full-time grooming crew. Thanks to access permit fees that support off-season preparation and daily grooming, the trails take less snow to become usable, while the well-packed snow better withstands warm temperatures. The towns’ trail report termed conditions as fair to marginal at mid-week.

The meltdown has left many restaurants, taverns and shops no longer snowmobile-accessible, which is one of the draws to the area’s network, Farmer said.

But it helps that the Old Forge area has other things to do, Farmer added. Snowmobilers might ride less now but then they can patronize dining and shopping venues, as well as one feature of the town of Webb that makes its own snow: the town-owned McCauley Mountain ski center, which has a network of cross country trails as well as lift-served downhill skiing and a revamped lodge.

Farmer said on a recent weekend afternoon, it appeared a quarter of people on the hill were in snowmobile suits. The combined summer and fall season generates more revenue, but snow sports have come to keep businesses open through the winter, Farmer said. In a season, 12,000 permits are sold, and he estimates they’re used eight times a season on average, or four weekends. Coupled with state estimates of per-snowmobiler spending, he figures that generates $20 million a year for the local economy.

“Our winter economy is totally dependant on that snowmobile industry,” Farmer said. “If they have limited riding, they’re gonna go find their winter recreation somewhere else, and McCauley’s right here.”

Like fishermen, snow-sports people prefer an optimistic outlook, and the forecast offers hope. A general 3 inches of dense snow came down from the eastern Tug Hill to the Old Forge area overnight, and seasonably cold temperatures and light snow are forecast for the next week. It’s only the first week of January, after all.

There’s talk on weather sites of a pattern change for the better, Rolf noted. At the lodge in Boonville, Silliman is telling callers to keep checking back because all it takes is one good snowstorm. And in Old Forge, Farmer notes that “wintry mix” often translates there to good conditions.

“The best stuff for us if we get wet, heavy snowfall,” Farmer said. “That’s the best to rebuild the base right now.”