Laboratory at Innovare named in honor of retired colonel 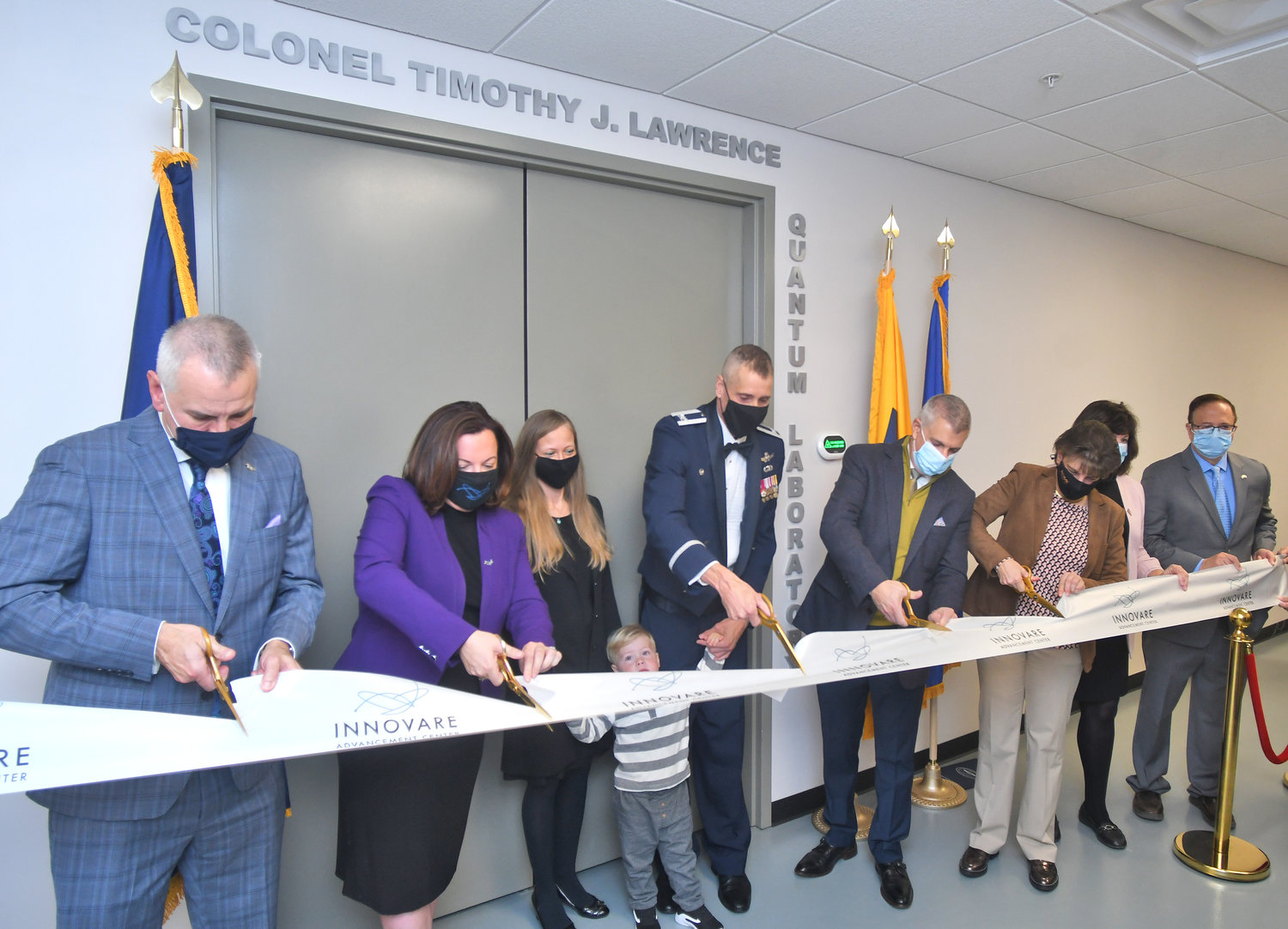 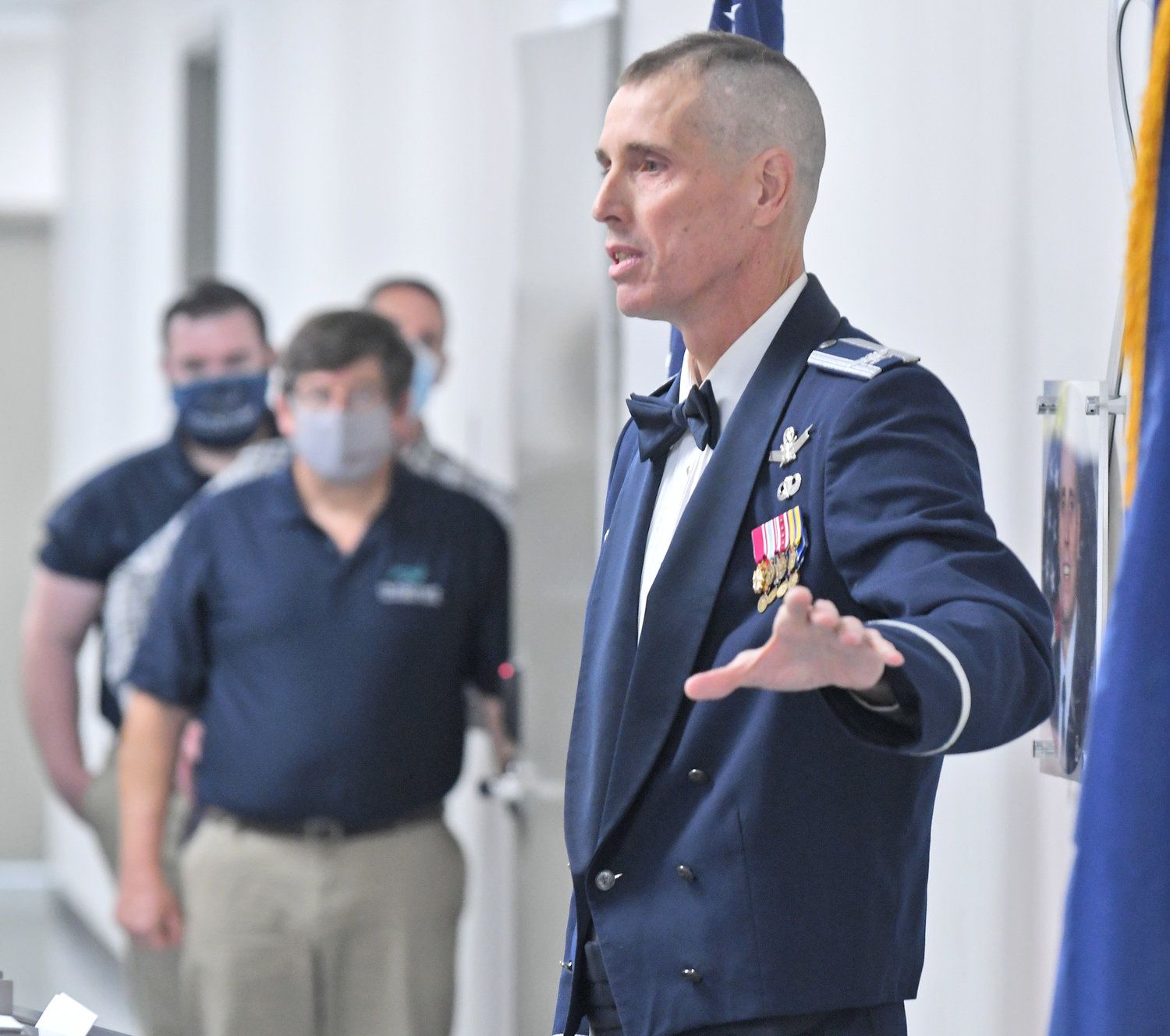 RECONGITION — Retired Col. Timothy J. Lawrence speaks before cutting the ribbon at the Innovare Advancement Center Quantum Lab named in his honor. Lawrence retired as director of Air Force Research Laboratory Information Directorate (AFRL/RI) this past summer after three years. Lawrence oversaw a $1.6 billion annual budget and research and development programs in command, control, communications, computers, cyber and intelligence areas. In addition to this most recent honor, Lawrence has been recognized with numerous awards and achievements throughout his 33-year Air Force career.
(Sentinel photo by John Clifford)
Previous Next
Posted Friday, October 29, 2021 5:30 pm

A new, state-of-the-art quantum science laboratory at Innovare Advancement Center (IAC) now bears the name of the man who drove its creation.

The Colonel Timothy J. Lawrence Quantum Laboratory was officially unveiled Friday at the IAC in Rome. The lab will enable foundational basic quantum research that will be used by scientists and researchers at the Air Force Research Laboratory Information Directorate (AFRL/RI) and international collaborators from academia and industry, to drive advancements in the Air Force’s command, control, computers, and intelligence (C4I) efforts.

“Innovare Advancement Center is quickly growing into its vision to become a global destination for scientists, engineers and entrepreneurs to converge and push boundaries on new technologies to advance national security,” said Heather Hage, president and CEO of Griffiss Institute. “Naming this laboratory for the man who pushed boundaries to bring it to life is our way of honoring Col. Lawrence’s contributions and establishing the highest bar of excellence for everyone who collaborates in our state-of-the-art facility.”

Col. Lawrence retired from the United States Air Force this past summer.  Col. Lawrence has been recognized with numerous awards and achievements throughout his 33-year Air Force career. The naming of the quantum laboratory in his honor is an additional recognition of his hard work and dedication to making sure this important technology is studied here in Rome.

“We are very pleased that the Griffiss Institute has chosen to name the new quantum networking laboratory after Col. Timothy Lawrence (Ret.),” said Dr. Michael Hayduk, AFRL/RI deputy director. “Throughout his career, Tim was a world-leader in developing transformative technologies for the U.S. Air and Space Force including quantum information science. Tim was also recognized at the highest levels of government for his leadership in shaping national policy for quantum technology.”

He said, “Col Lawrence (Ret.) was a driver behind the creation of Innovare recognizing the need for partnerships among the Air Force, industry, academia and international collaborators as a means to accelerate the development of deep technology and creating the high-tech workforce needed to compete globally.”

County Executive Anthony J. Picente Jr. said there no better person to name the Quantum Laboratory at the Innovare Advancement Center after than Col. Timothy Lawrence.

“His extraordinary vision and dynamic leadership at Rome Lab served as the catalyst for positioning Oneida County as the world leader in the field of quantum,” said Picente.

Col. Tim Lawrence, since the day he arrived at AFRL/RI, was focused on quantum computing technology as the next frontier of global computing systems, said Mayor Jacqueline M. Izzo.

“He worked tirelessly to bring the technology to Rome Lab, but more importantly he also understood the significance of standing up the IAC as a collaboration model to study not only quantum computing, but machine learning, artificial intelligence and UAS technologies,” Izzo said. “His dedicated effort to bringing quantum computing research to Rome Lab resulted in the Lab being named the lead in quantum computing for the Air Force and Space Force. Tim’s vision for Rome Lab’s future of cutting-edge research will live on through the Colonel Timothy J. Lawrence Quantum Lab.”

“His successful track record on technology development and transition will keep Airmen safe in future conflicts,” Masiello said. “Even more impressive is his passion for developing the next generation of leaders including Air Force Academy Cadets, AFIT Advance Degree students and AFRL officers and civilians. All-in-all, Col. Lawrence leaves a tremendous legacy that will pay dividends to the warfighter for decades.”

“To say that Tim Lawrence is a unique, and uniquely talented person, is a profound understatement,” added Brig. Gen. Marty France, USAF (Ret). “Few among us have had such a huge, positive impact on so many people, in so many places around the world, across such a breadth of experiences and specialties.”

The laboratory is located on the first floor of the IAC. Researchers and scientists from across the country, and around the world, will target three primary quantum technologies: trapped ions; photonics, which involves using lasers to perform research; and superconducting, which freezes particles at a certain state to conduct research under those conditions.

The laboratory will also play a role in the Air Force Research Laboratory’s recent designation as the Quantum Information Science Research Center for the U.S. Air Force and Space Force, which will allow AFRL to develop new partnerships and collaborations to gain further knowledge from leading researchers in academia and industry in the field of quantum information science.

“The quantum computing innovation race is a great scientific race of the 21st century – and with the help of the Innovare Advancement Center, Rome Lab and the Mohawk Valley will ensure the U.S. is a quantum leap ahead of the competition,” U.S. Senate Majority Leader Charles E. Schumer. “I have worked very hard to secure tens of millions of dollars to supercharge Rome Lab and help launch Innovare, which will attract the best and brightest across the globe to the Mohawk Valley for game-changing R&D in quantum computing, artificial intelligence and so much more.”

U.S. Senator Kirsten Gillibrand said she was proud to have worked with Senator Schumer to secure significant federal funding for the development of the Quantum Information Science Innovation Center.

“Having just toured Innovare and the new quantum lab, I can say for certain that this facility is truly state-of-the-art and will serve as a beacon of New York State’s scientific and entrepreneurial spirit,” Gillibrand said. “Every day, Innovare is making advances in cutting-edge artificial intelligence, unmanned aerial systems and quantum technology that will put New York State at the epicenter of quantum research and make America a worldwide leader in technological innovation and cybersecurity infrastructure.”

Innovare Advancement Center, where the new Colonel Timothy J. Lawrence Quantum Lab is located, officially opened earlier this summer, next to the Griffiss International Airport, and is a partnership between AFRL/RI, the Griffiss Institute, Oneida County, the City of Rome, New York, NYSTEC and the State University of New York.