Knights keep on firing away in defeating hot Caz goalie 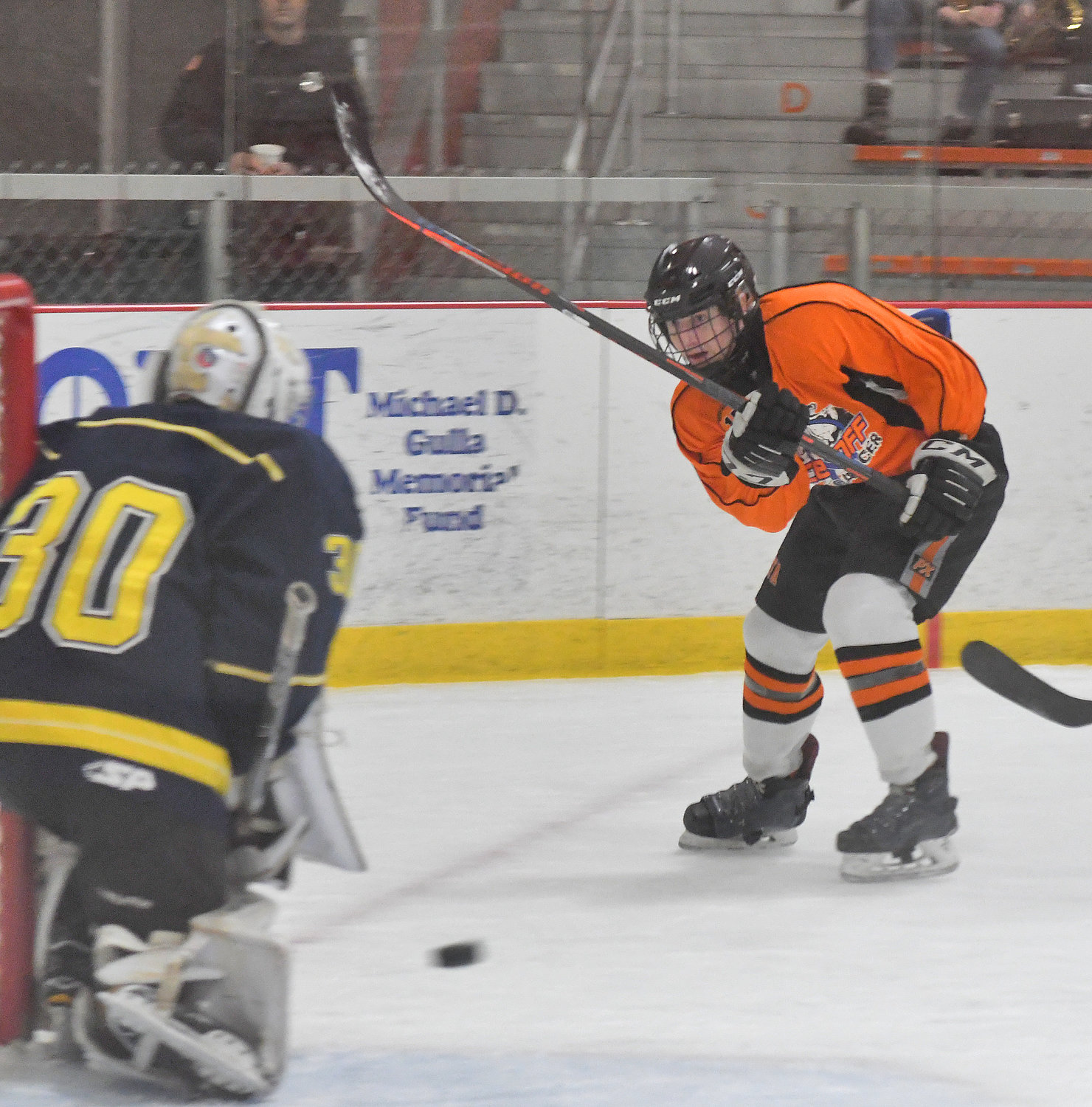 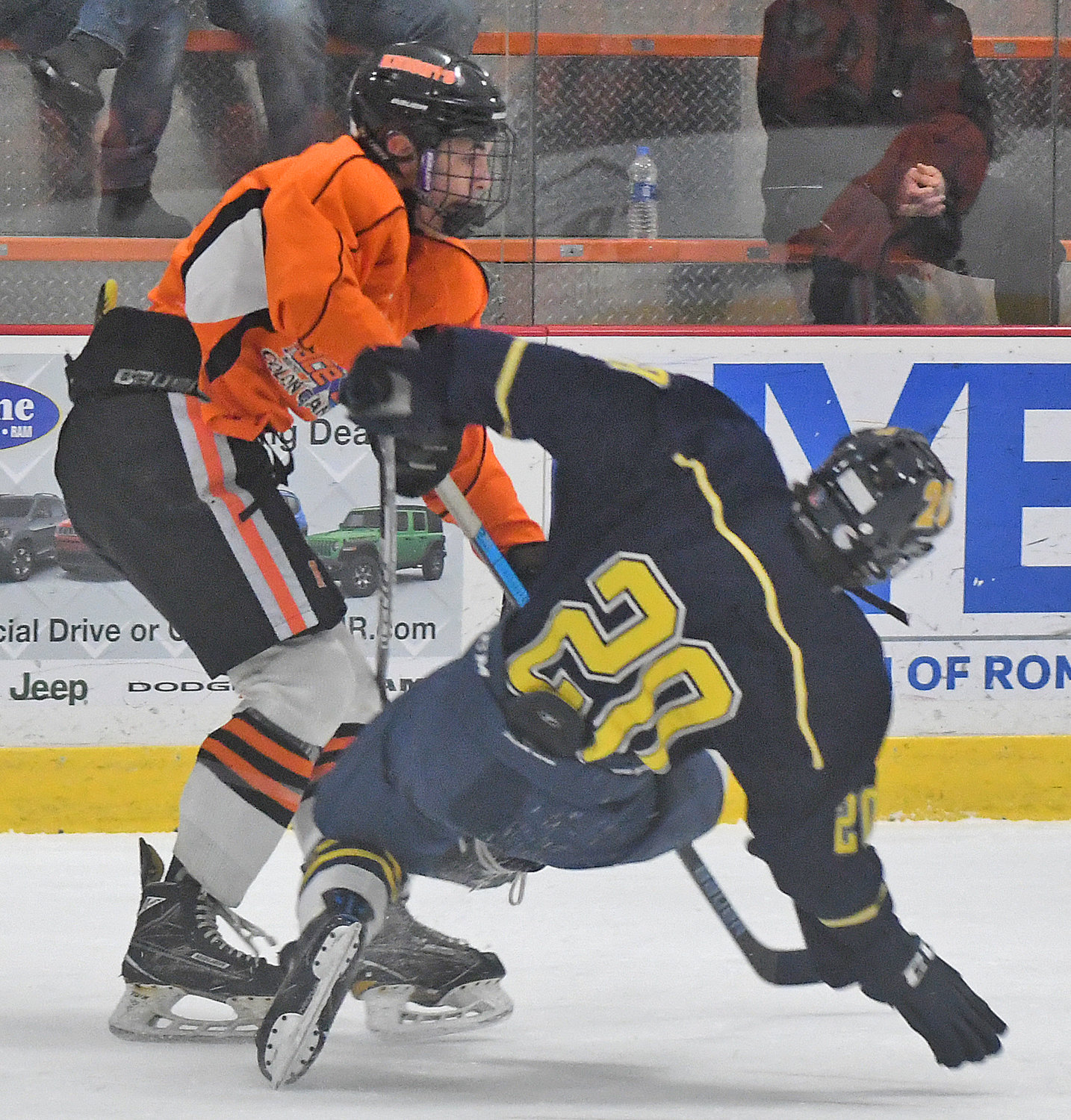 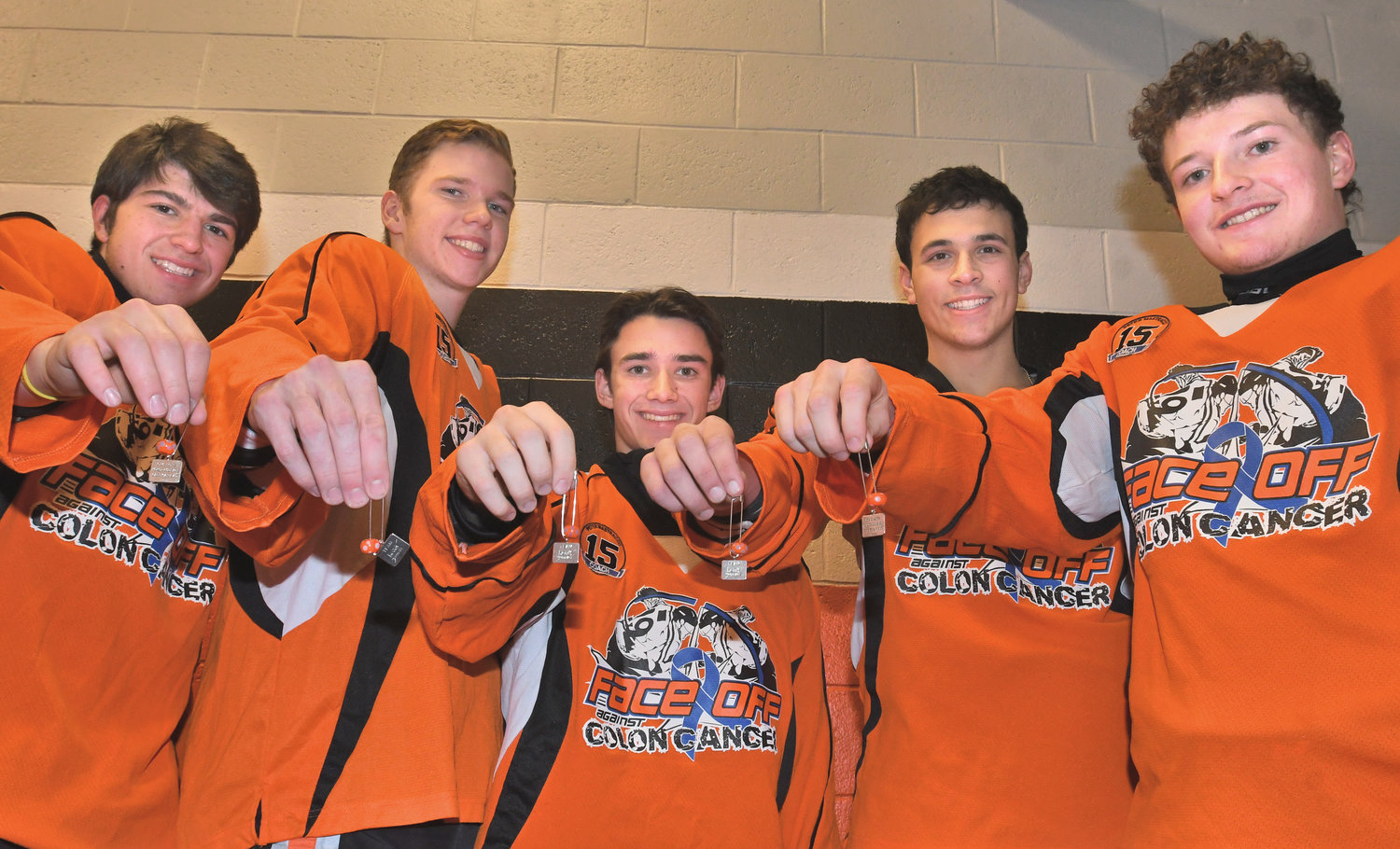 BEADS OF COURAGE — The Rome Free Academy ice hockey seniors hold up their Beads of Courage worn during Friday night's Face Off Against Colon Cancer benefit game at Kennedy Arena. From left: Michael Bostwick, Kyle Clark, Dylan Gannon, Danny Mecca and Aaron Simons. Pinned to their special orange jerseys, the beads are in honor of the Maureen's Hope Foundation. The players wrote messages of inspiration on them to children battling cancer. The beads are given to the foundation and distributed to children with cancer after treatment milestones. The recipients use them to make bracelets and necklaces that tell the story of their fight against cancer.
(Sentinel photo by John Clifford) 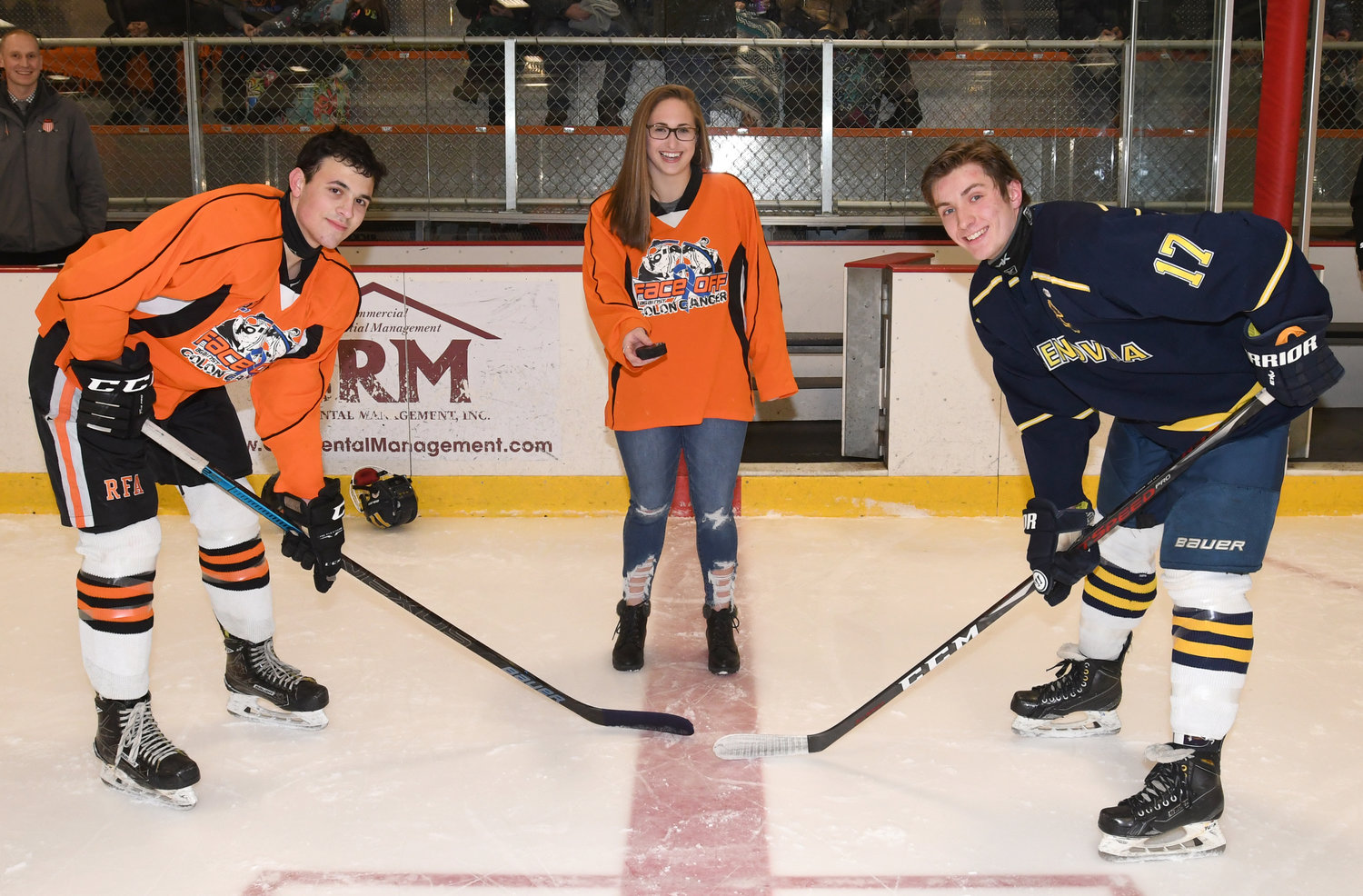 FACE OFF — The ceremonial puck drop at Friday night's Face Off Against Colon Cancer benefit game at Kennedy Arena was made by Kaitlyn Mastracco, daughter of former Rome Free Academy coach and player Peter Mastracco, who died of colon cancer. At left is RFA captain Danny Mecca and at right is Cazenovia captain Dominic Paglia. Over $1,000 was raised during the game.
(Sentinel photo by John Clifford) 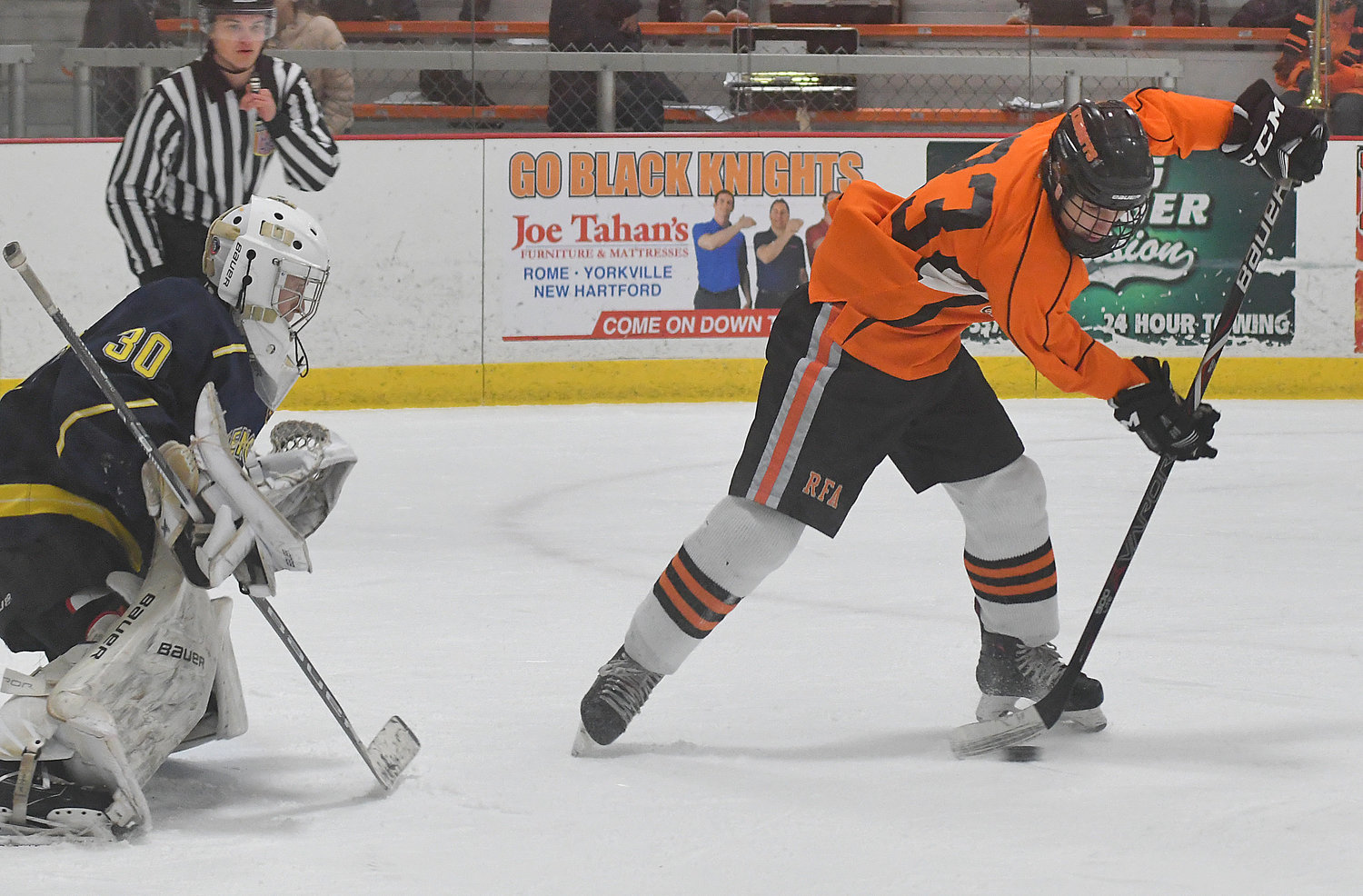 The Rome Free Academy hockey team poured on the shots — 51 in total — and got goals from four different players as the Black Knights topped Cazenovia, 4-0, at Kennedy Arena Friday night in the team’s annual “Face Off Against Colon Cancer” benefit game.

The league win improves RFA to 9-3 overall and 4-2 in Division I. The team is right back in action this afternoon at home against Geneseo in a non-league game.

RFA opened the scoring with 7:56 left in the first period, a give-and-go between sophomore Jake Hall and junior Griffin Eychner that got the sizable home crowd roaring. Hall took an outlet pass and raced in on the left side, dished to Eychner and took a return pass and slid it home on the open left side, past Logan Palmer. Eychner earned an assist for his efforts.

With 1:51 left in the first period, RFA was shorthanded with a player in the penalty box. But it was the Black Knights who capitalized rather than the Lakers. Junior defenseman Aaron Russell banked a pass off the boards near center ice and forward Kyle Lubey, also a junior, grabbed the puck in stride, swooping in on the left side and shooting low past Palmer to make it 2-0 RFA. Russell was credited with an assist.

RFA outshot Cazenovia 12-4 in the first period, and would outshoot them 51-14 in the game. Palmer stopped 47 shots in the loss. RFA’s Isaiah Nebush, a sophomore, stopped all 14 to earn the shutout in net.

“That goalie is incredible,” said RFA head coach Jason Nowicki of Cazenovia’s Palmer after the game. “He kept them in the game tonight.” He said Palmer “frustrated us all night long, but I think it was good.” He said his players had to understand that “anything (Palmer) sees he’ll make the save on,” so they had to screen him and make him move side to side, anything to get him out of his comfort zone.

The lone goal of the second period was scored by Eychner, who took a pass from Aaron Simons from right to left. Eychner’s wrist shot beat Palmer and put RFA up 3-0. Simons, a senior, and Jacob Premo, an eighth grader, each earned assists. Sophomore Logan Dorfman ended the scoring with 46 seconds left in the game when he grabbed a rebound off the back boards behind Palmer and snuck the puck just inside the near post to make it 4-0 RFA. Lubey and sophomore Ramon Caro had the assists.

Nowicki said the team managed to avoid getting too much “forward lean,” a tendency when getting so many shots on goal to forget to play solid defense. “Tonight we were well balanced.”

Even through RFA took four penalties, Nowicki said they were the results of “us playing hard,” the types of penalties he said he was not upset with.

Even so, RFA still only was on the penalty kill twice, stopping both and even getting the shorthanded goal. The Knights did not convert on either of their power play opportunities.

“Everybody’s chipping in,” said senior defender Michael Bostwick after the win that improved RFA to 6-0 at home. With “good transition,” the team has “the opportunity to put pucks in the net.” To keep that going, he said, he and his teammates have to “be just as strong as we were.”