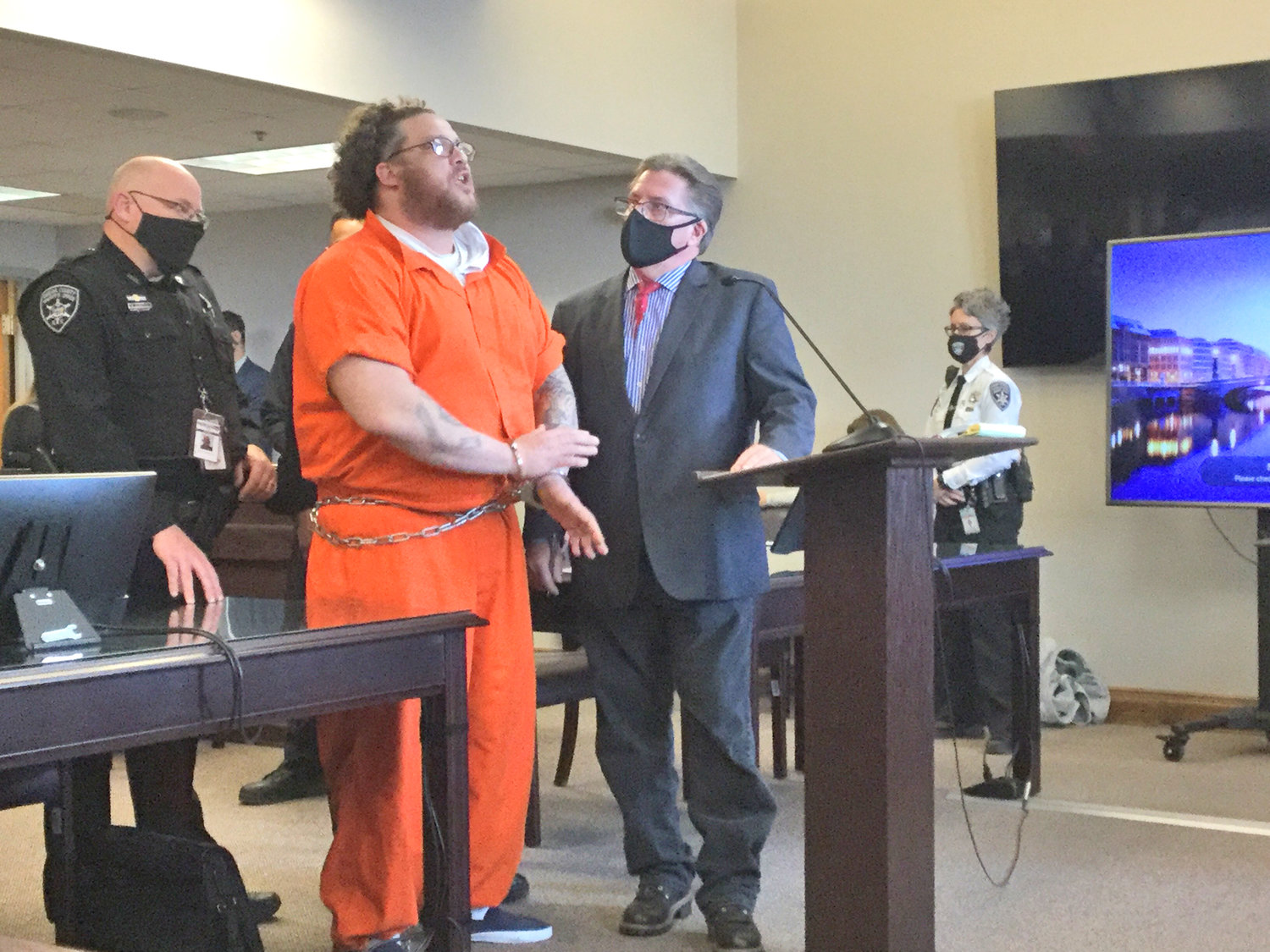 THREATENS THE JUDGE — Convicted killer Wilfredo Cotto made several threats and disparaging comments towards Judge Robert L. Bauer Friday morning after launching into an angry rant about his case and his treatment in court.
(Sentinel photo by Sean I. Mills) 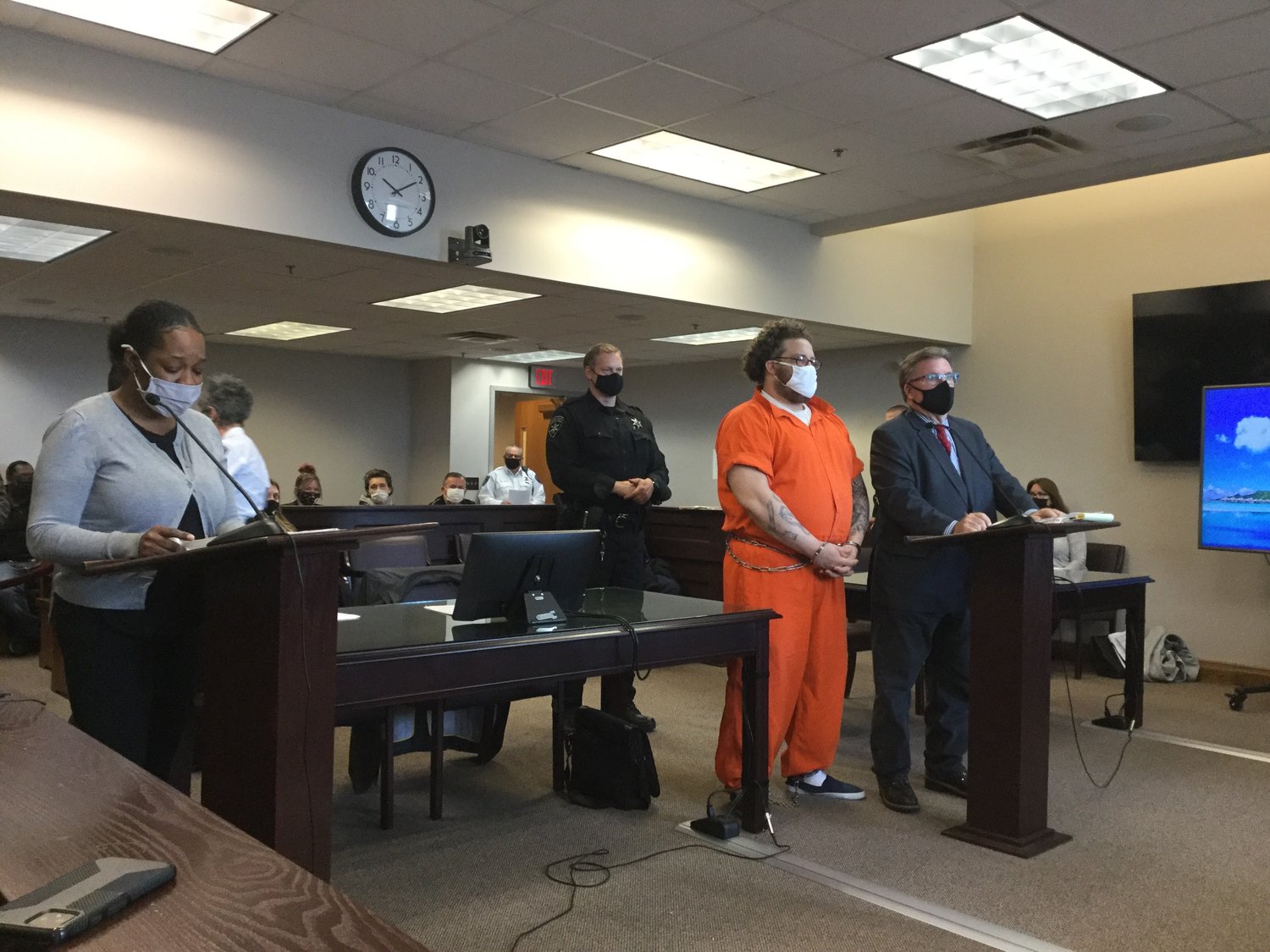 SISTER SPEAKS — Shakeena Lesane, the sister of murder victim Benjamin Davis, confronted his killer in County Court Friday morning. Lesane said she can still remember her daughter’s cries when she found out her uncle was dead.
(Sentinel photo by Sean I. Mills) 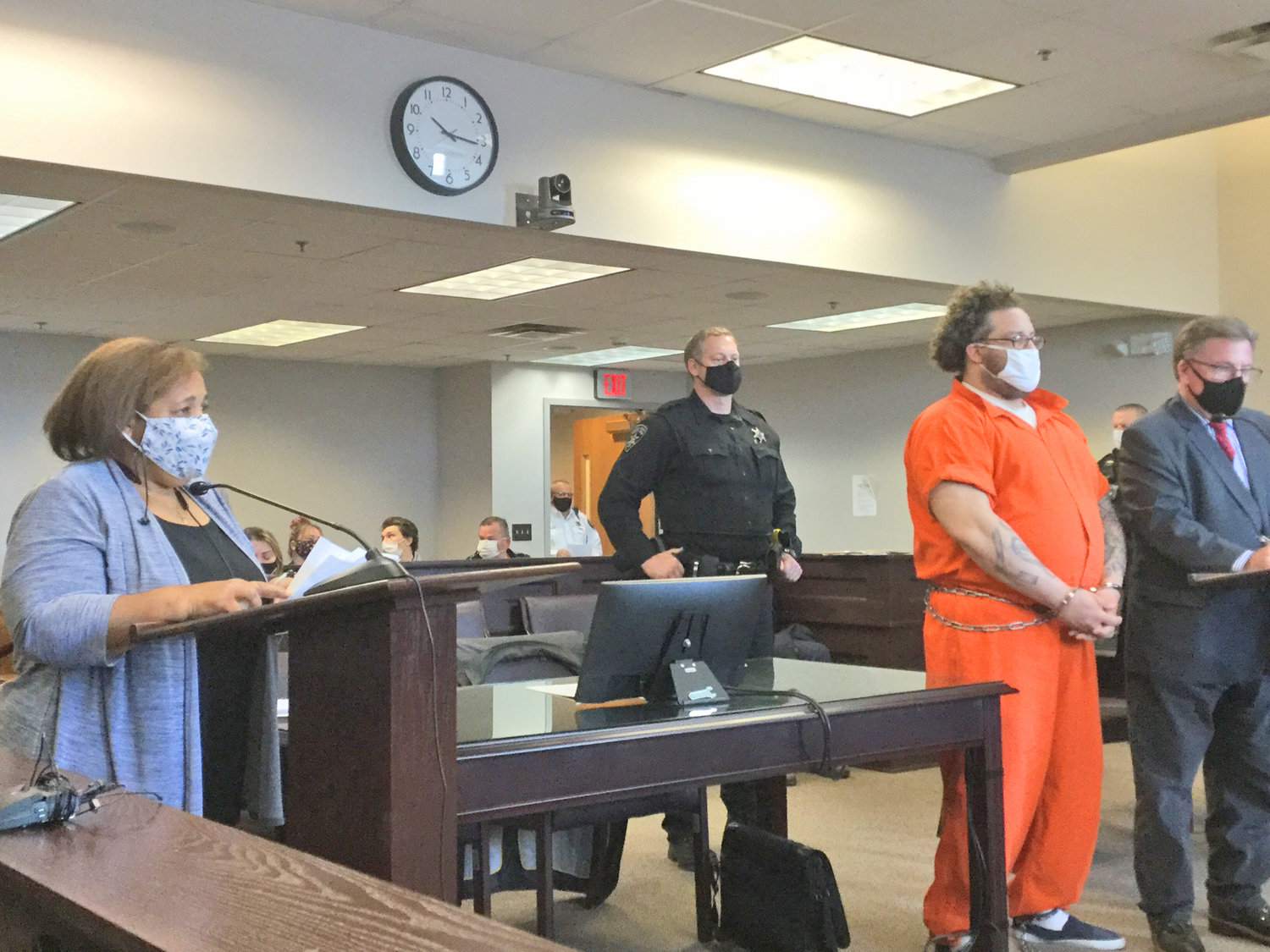 MOTHER CONFRONTS KILLER — Sadie Lesane could barely hold back her tears on Friday when she confronted her son’s killer in County Court. Lesane said Wilfredo Cotto “terrorizes” other people and it must be stopped.
(Sentinel photo by Sean I. Mills) 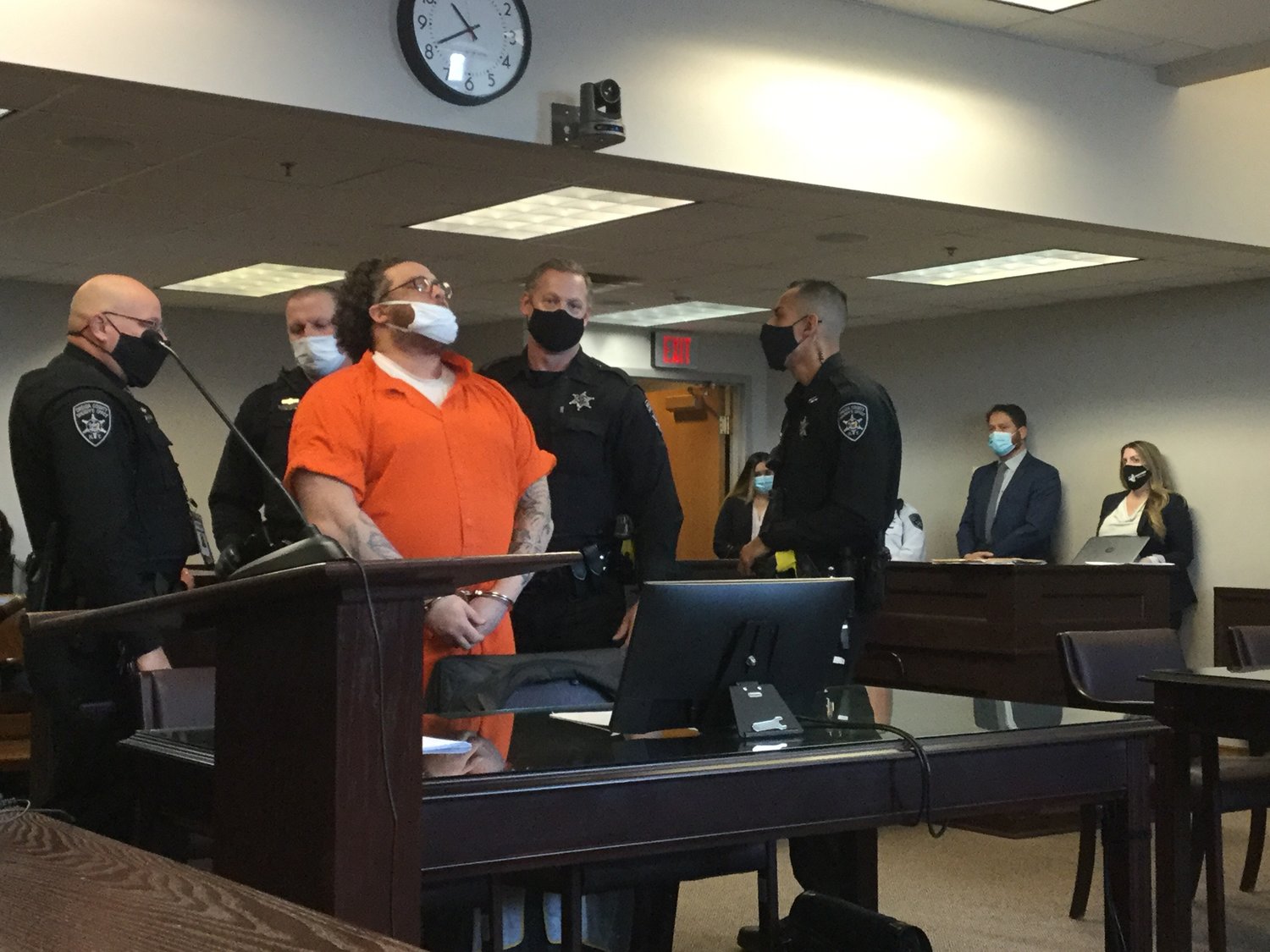 ATTEMPTING TO LEAVE — Convicted killer Wilfredo Cotto attempted to leave the courtroom in anger Friday morning after Judge Robert L. Bauer called him a “monster”. When sheriff’s deputies stopped Cotto, he burst into a minutes-long, expletive-filled rant against the judge.
(Sentinel photo by Sean I. Mills) 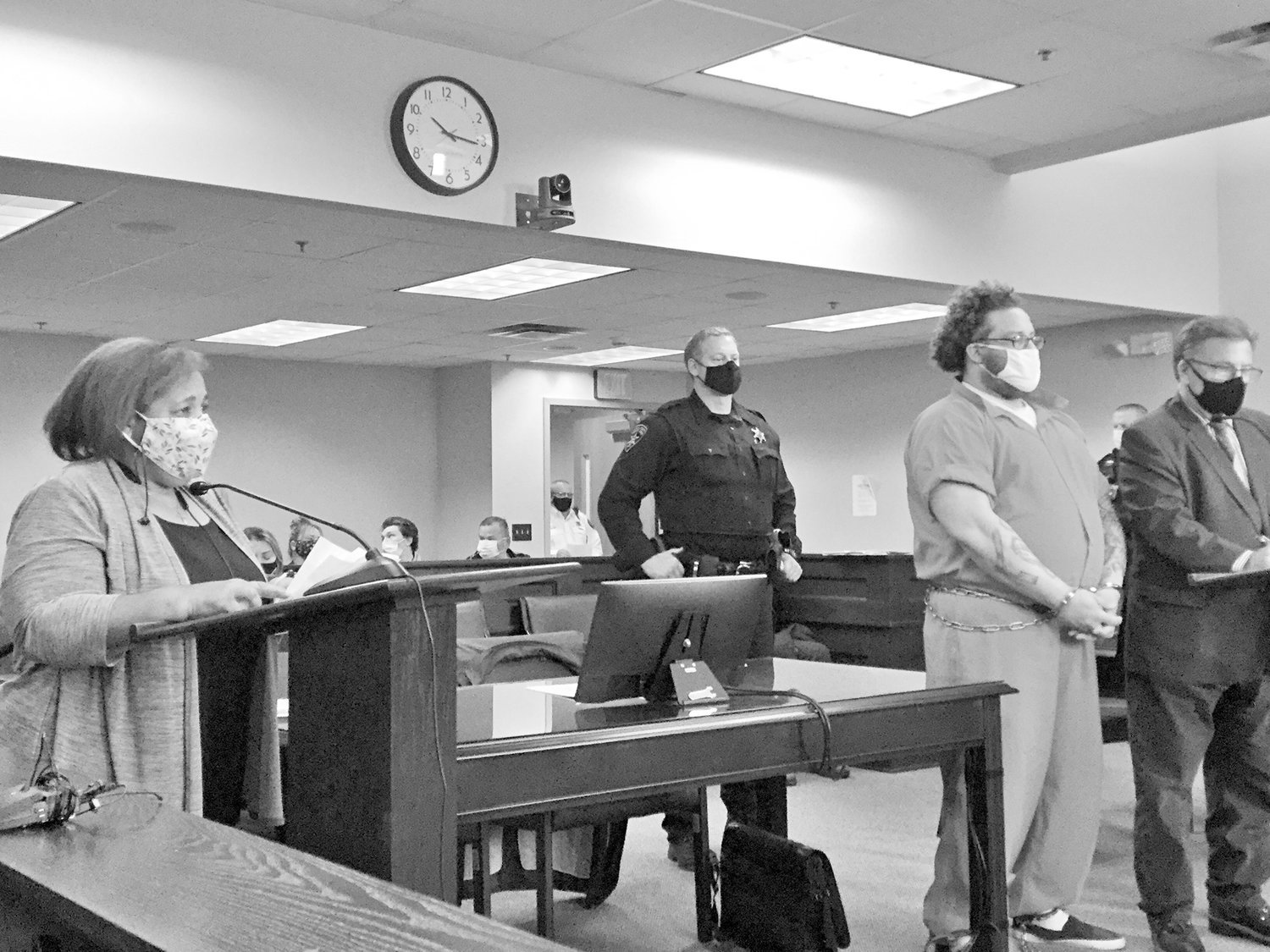 MOTHER CONFRONTS KILLER — Sadie Lesane could barely hold back her tears on Friday when she confronted her son’s killer in County Court. Lesane said Wilfredo Cotto “terrorizes” other people and it must be stopped.
(Sentinel photo by Sean I. Mills)
Previous Next
Posted Friday, November 5, 2021 3:00 pm
Sean I. Mills

At his sentencing for murder in County Court Friday morning, convicted killer Wilfredo Cotto exploded in a minutes-long, expletive-filled rant, including threats to kill the judge.

Cotto, age 41, of Rome, was nearing the end of his sentencing and listening to Judge Robert L. Bauer admonish him when Cotto interrupted and demanded he be allowed to leave the courtroom. Cotto, who is in custody and handcuffed, was immediately surrounded by members of the Sheriff’s Office before he started berating and threatening Judge Bauer.

“If I ever make it back to Oneida County, the first one I’m going to shoot is you,” Cotto yelled at the judge. He hurled multiple derogatory insults at the judge.

Cotto ranted for several minutes about his treatment and his case — peppered with apologies to the family of murder victim Benjamin Davis. Though Cotto also ranted about not having any evidence that he had shot and killed Davis.

”Where’s my (expletive) evidence that I killed somebody?” Cotto shouted multiple times.

“I didn’t mean to kill that man. But you’re not going to make me look like the devil, because I’m not the devil,” Cotto ranted.

“I’ve never hurt a person in my life. Yeah, I’ve committed felonies. Yeah, I’ve robbed people. I’ve never popped nobody personally though. I rob stores. I rob banks. I burglarize stores. Nobody was there. So get your facts straight before you guys throw me in the dirt, run my name all through the dirt.”

After Cotto calmed down, Judge Bauer sentenced him to 23-years to life in state prison on a charge of second-degree murder and several weapons charges. Cotto was then led out of the courtroom and his defense attorney, Kurt Schultz, apologized to the court and Davis’ family.

Authorities said Cotto shot and killed 28-year-old Benjamin J. Davis at the Red Carpet Inn on Lawrence Street in Rome at about 12:15 p.m. Nov. 15, 2020. Davis, of Ulster County, was staying at the motel and was shot three times in the back and face, authorities stated.

There were conflicting accounts in court on Friday as to why Cotto went to see Davis, whether it was to rob him, speak to him or to get revenge for something that happened involving Cotto’s son.

Members of Davis’ family were in court to attend the sentencing. They were allowed to speak first, ahead of Cotto’s unexpected outburst.

Davis’ sister, Shakeena Lesane, said that she can still remember her daughter’s cries when she found out her uncle was dead. Lesane said her children loved their uncle.

“He had such a big heart. He loved his family so much,” Shakeena told the court.

“The choices that you made that day hurt a lot of people. Our family still struggles,” Shakeena said to Cotto. “He does not deserve leniency. I would like to return home and tell my daughter that justice has been served.”

Davis’ mother, Sadie Lesane, could barely hold back the tears as she addressed Cotto and the court.

“Our lives were ripped apart and changed forever,” Sadie said on Friday. “You have taken away my son for no reason whatsoever. My family, my children, are destroyed. They were best friends, as well as brothers and sisters.”

Regarding Cotto, Sadie told the court, “What we’ve seen of him is what he is. He terrorizes, he robs, he kills people, and it should be stopped.”

After both Assistant District Attorney Todd Carville, the prosecutor, and defense attorney Kurt Schultz, said a few words, it was Cotto’s turn to speak. He started off calmly, apologizing and attempting to explain himself.

“First, sorry to my family, and sorry to Mr. Davis’ family. It wasn’t supposed to happen,” Cotto told the judge.

”I’m not a killer. If you look at my record, I’ve got grand larcenies.”

Cotto has an extensive criminal history dating back at least 20 years. He has spent multiple sentences in state prison.

Cotto said he was smoking synthetic marijuana at the time of the shooting, though added that is “no excuse”. Cotto said Davis “shouldn’t be dead today.”

”I’m not a monster. I had a drug addiction at a young age and I kinda threw my life away to the drug addiction,” Cotto said on Friday. “I did what I did. I’m not happy. I’m not proud.”

After Cotto, Judge Bauer began a long lecture informing Cotto of what he’d done and what he deserved.

“You’re someone who preys upon the weak,” Bauer said, his voice calm and steady. Bauer did not raise his voice.

Shortly after that comment, while the judge was still speaking, Cotto became irate and demanded he be allowed to leave. He attempted to go, but was stopped by the deputies on hand. Cotto then erupted in his angry tirade.