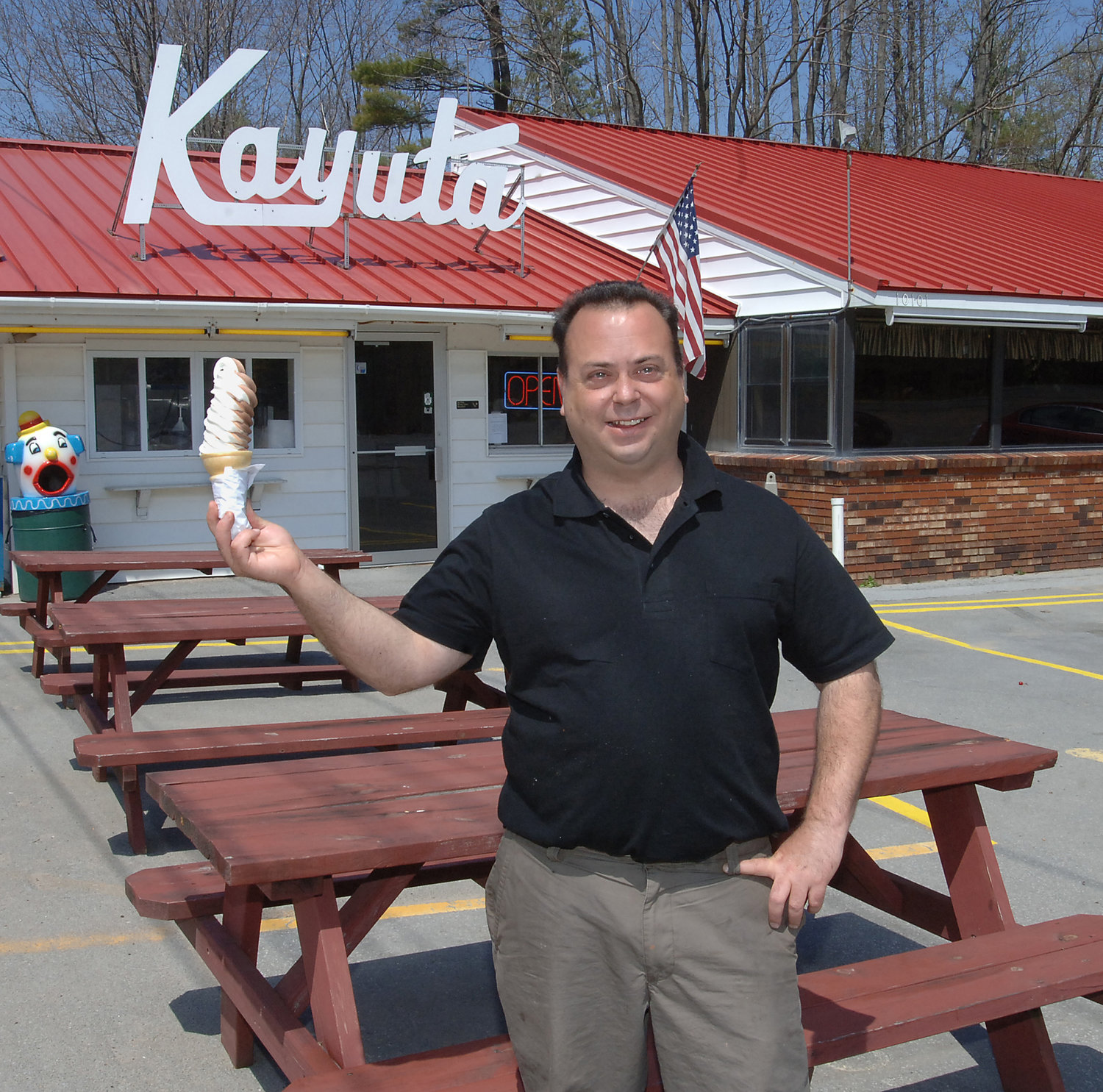 Jim Minosh Jr. with one of the countless ice cream cones he has made over the years.
(Sentinel photo by John Clifford)
Posted Tuesday, September 13, 2022 7:19 am
More information

Kayuta Drive-In, at 10101 Dustin Road, will open their signature red and white umbrellas through Sunday, Oct. 9, when the sun sets on their 59th season.

This simple spot along the trek from Utica-Rome to lakes and camps “up north” has been family owned since 1963. Jim and Carol Minosh raised their two kids here, jerking soda, mixing milkshakes and grilling footlongs for local families and road-tripping regulars who pull off and fill up on the taste of summer.

“We’ve been here so long that we get regulars that come through every year on the way to Old Forge and 1000 Islands,” said Jim Minosh, who took over the business from his father in 1989, “Generations of families stop in - and continue to stop in. People who remember coming here as kids now come with kids of their own.”

And no parent can escape the stop for an ice cream cone with patriot colored sprinkles when it is marked by the sight of Muncho the Clown, Kayuta Drive-In’s signature mascot.

“We used to have a float in the Field Days Parade, a big banana split, and two clowns who threw candy to the kids,” reminisced Minosh about Muncho’s creation myth. “Muncho and Wacko … my father created those characters.”

Customary ice cream windows are curbside. A generous indoor dining room does not disappoint with vintage red-and-which decor and a crew of apple-cheeked local kids lined up at the counter to take your order off a generous menu board, boasting traditional drive-in fare: a “famous” fish fry, those footlong dogs dolloped with home-made chili, a seafood combo of shrimp, scallops and haddock, homemade clam chowder and what would summer be without a net full of steamed clams with lemon and drawn butter?

As long as the lazy days linger, the grassy picnic grove out back offers an almost mystic space to sip a soda and share some fries.

Local kids who mark the passing of summer by the opening of those red and white umbrellas in April and the sad sight of barren tables without them when they’re folded up in October, later come to work at the beloved local joint, flipping burgers for a new generation of kids growing up on Muncho the Clown and Kayuta’s soft serve.

“The majority are high school kids working their first job,” said Minosh. “A lot of them work summers right through to graduating from college.”

“The employees who stop in later in life and thank you for all that you helped them with - their first job - how enjoyable it was here …” Minosh trails off. “Those are my favorite moments.”

Next summer, Minosh proudly proclaimed that Kayuta Drive-In will host a “get-together” on June 24 to celebrate their 60th season.

Said Minosh of the span, “You just don’t see that much anymore?”

Yelper, “Corrine K.,” took time to share this about a stop at Kayuta Drive-In …

“...but enough about the food. You know why you really stopped here? You stopped for the childlike joy of rainbow sprinkles, for the roadside picnic tables with metal umbrellas and - most importantly -for the luxurious feeling of those carefree and endless days of summer.”