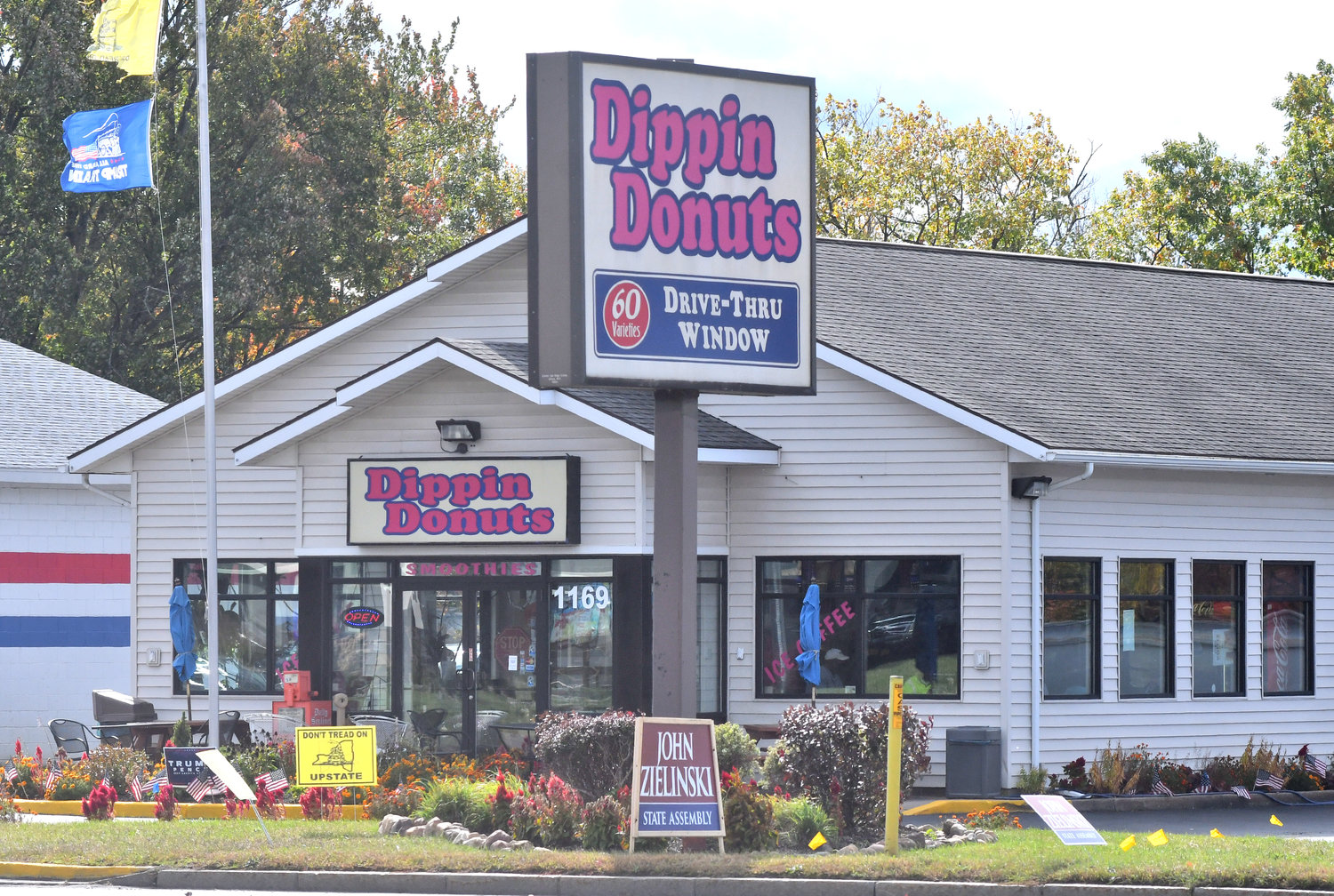 UP TO THE JURY— Prosecutors claim between 2013 and 2017, three members of the Zourdos family, owners of Dippin Donuts including the Erie Boulevard West store shown above in this file photo, concealed more than $1 million in cash sales to avoid paying taxes on it. The jury began deliberations in the Federal Court case on Tuesday.
(Sentinel file photo)
Posted Tuesday, November 9, 2021 8:01 pm
Sean I. Mills
Staff writer
email / twitter

Did the Zourdos family "willfully" scheme to hide nearly $3 million in Dippin Donuts cash sales from the IRS? Or was the family acting in "good faith," trusting in their longtime accountant to know about the money and file the proper tax returns?

These are among the many questions now before a Federal Court jury. Deliberations began late Tuesday afternoon in the Zourdos family tax evasion case, with no verdict reached. Deliberations were scheduled to resume at 9:30 a.m. Wednesday.

John, Helen and their son, Dimitrios Zourdos, all of Rome, are accused of diverting nearly $3 million in cash sales from their company, Dippin Donuts, between 2013 and 2017, according to the U.S. Department of Justice. Prosecutors said the family funneled upwards of $1 million into their personal bank accounts and then never told their accountant, allowing for false tax returns — both personal and corporate — to be filed during those years.

The family is also accused of paying their employees under the table in cash for overtime hours worked.

The three are all charged with one count of conspiring to defraud the United States, seven counts of tax evasion and seven counts of aiding and assisting in the filing of false corporate income tax returns. They each face at least three to five years in federal prison if convicted on the charges.

Prior to the start of jury deliberations, the prosecution and both defense attorneys gave their closing statements to the jury.

Prosecutors: Family knew what they were doing

At the heart of the case against the Zourdos family is whether or not they acted "willfully" in trying to hide their money from the U.S. government. Whereas some major crimes require the prosecution to prove intention, officials said on Tuesday that tax crimes involve whether or not the defendants "willfully" knew what they were doing was a crime.

"It was actually harder work for them to do what they did," said John N. Kane, assistant chief for the Tax Division of the U.S. Department of Justice, who gave the prosecution's closing statement.

Kane said that depositing all sales into a single corporate bank account would have been far easier than making cash deposits into more than a dozen personal accounts at three different banks. He said the family made these deposits to "help conceal the magnitude of the thefts."

Kane told the jury there were several factors that clued the IRS investigators into believing the Zourdos family was "willful" in their scheme to hide the money. He pointed to the family's expensive purchases, from Porsche cars to Rolex watches, with large cash payments on each: "it means no paper trail, it means concealment."

"They knew they were living a life that was totally at odds with what was being reported to the IRS," Kane said.

One factor in determining willfulness was a mysterious decimal point that began appearing in the family's daily sales calendar books right around the time an IRS auditor was looking at those books, Kane told the jury. One of the Dippin Donuts shops was audited in 2017, and in October of 2017, the auditor was looking at calendar books from prior years.

Meanwhile, in the Oct. 2017 calendar books, Kane said someone started adding a decimal point to the sales numbers as if to hide their true monetary value.

Another factor that Kane explained to the jury was how the cash deposits stopped almost to the day that John and Helen Zourdos were interviewed by IRS investigators. Kane said that, in August 2018, the IRS interviewed the couple separately, but did not yet know about the cash deposits into the personal bank accounts. Kane said the agents never asked about the deposits into the personal bank accounts.

Yet according to Kane, the cash deposits stopped, and the legal wages paid to each family member through Dippin Donuts began to rise dramatically by hundreds of dollars per documented paycheck.

"When agents knocked on their door...they stopped those cash deposits immediately," Kane said in his closing, calling it a "coordinated effort" around the day Helen was interviewed.

"That tells you they knew those cash deposits were all about tax evasion," Kane told the jury. "If this was all fine...why would they stop doing it? Why not keep doing it?"

In regards to Dimitrios Zourdos, who is claiming that those cash deposits were gifts, Kane asked the jury why the deposits would stop if they were indeed gifts.

Kane also told the jury that the defense's argument that the family accountants were to blame was "not credible". Kane said that both John and Helen told the IRS investigators that the accountants were never given the daily sales calendar books.

David Garvin, the defense attorney for John and Helen Zourdos, started his closing statement by explaining to the jury that "this entire case has a gigantic reasonable doubt."

Garvin explained that "tax cases have some peculiarities" due to the complex nature of the nation's tax code.

"'Ignorance of the law is no excuse' does not apply in tax cases," Garvin told the jury.

"To be guilty of a tax offense, the defendant must act willfully...to act voluntarily and intentionally with a purpose to do something the law forbids...ignorance, mistake and even negligence are not willfully. If a person acts in good faith, it can never be willful. John and Helen, they acted in good faith."

Garvin's closing statement focused on the idea that the family's accountants, Heather O'Rourke and Vincent J. Gilroy, were to blame for not keeping track of the money. Garvin said that Gilroy told the Zourdos family to "bonus out" cash to themselves from the corporate accounts, because that is how the owners of a "C Corporation" save themselves from "double taxation".

"The truth is that these two people were working themselves to death trying to run three donut shops and they had to rely on their accountants," Garvin told the jury.

Garvin pointed out that O'Rourke visited Dippin Donuts once a month to collect bank statements for the corporate tax returns, and "John made no effort to prevent Miss O'Rourke from taking anything that she deemed necessary to do the tax returns...no excuse for her not looking at the sales journals, and John and Helen believed in good faith that she did."

Garvin told the jury that Gilroy's statements to investigators about what he knew about the daily sales calendar books kept changing, whether or not he knew what the books were or whether or not he opened them. Garvin pointed to the 2017 auditor's activity log and an entry stating that Gilroy was going to hand over the calendar books and "explain them" to the auditor.

Garvin suggested to the jury that if Gilroy was going to "explain them" to the auditor then surely he knew all about the calendar books. Garvin suggested that perhaps Gilroy was attempting to cover up the fact that he never reported the cash deposits on the tax returns.

As for the decimal points added to the calendar books, Garvin said "this cannot be an attempt to conceal anything because it conceals nothing," pointing out to the jury that whoever added the decimal points did not alter the actual sales figures.

Defense attorney Gabriel Nugent gave a closing statement for Dimitrios Zourdos that focused on Dimitrios' lack of involvement in any of the family's business decisions. Nugent said Dimitrios worked his job at Dippin Donuts and ran the business when his parents were on vacation, but he was not involved with the accountants or anything to do with filing corporate tax returns for the business.

"How can he be charged with that if he had nothing to do with it?" Nugent asked the jury. Likewise, he said Dimitrios had no involvement with his parents' personal tax returns, despite the government's charges against him.

Nugent told the jury that all of the cash deposits into Dimitrios' personal bank accounts were "gifts" from his parents, which are not taxable. Nugent called the last witness in the case Tuesday morning, an accountant who testified that both Dimitrios and his sister, Rose Zourdos, received nearly the exact same amount of cash deposits into their personal bank accounts. Rose has not been charged in this case.

Along with the cash deposits, Nugent pointed out that John and Helen also gifted their son with money to help restore a vintage car and gifted him their old house.

"You don't become part of a conspiracy just by participating in those duties. He was always a reliable son, a loyal son, who did his job."