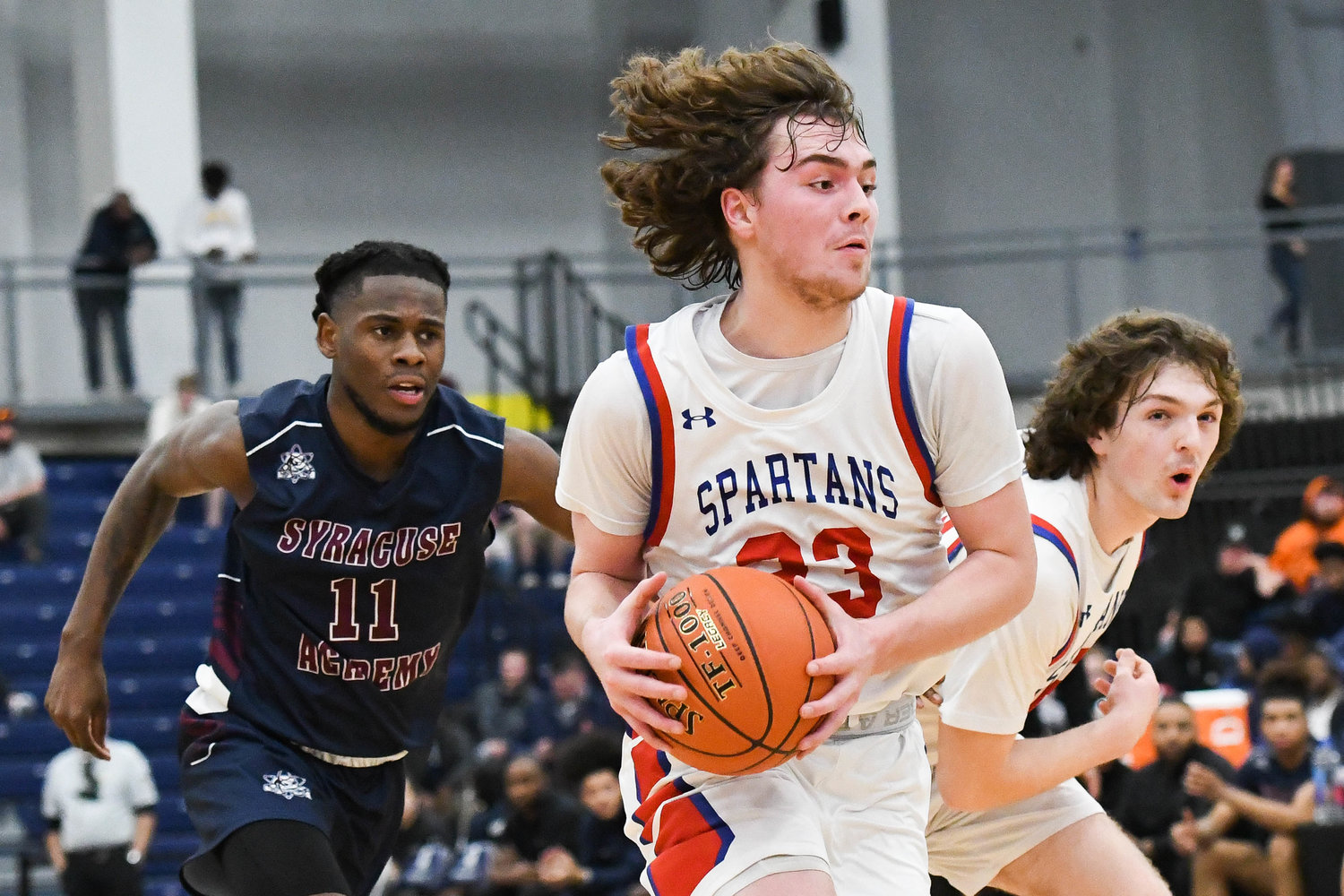 ON THE MOVE — New Hartford player Zach Philipkoski (23) dribbles the ball during the Section III Class A final. Philipkoski was New Hartford’s top player in helping the Spartans on a run to the Class A state championship game.
(Sentinel photo by Alex Cooper)
Posted Saturday, April 9, 2022 8:00 am
Ben Birnell
Sports writer
email / twitter

Philipkoski, the 6-foot-4 guard/forward, became the seventh New Hartford player to reach 1,000 career points in February. With help from seven games of scoring 30 points or more -- his season-best was 43 back in December -- he finished with more than 500 points during the regular-season. He’s the third New Hartford player to finish a regular-season with more than 500 points.

In earning the Tri-Valley League’s Player of the Year honor, he battled through foot and shoulder injuries and helped New Hartford achieve a few program milestones en route to a run to an appearance in the state championship game. The team finished with a 24-3 overall record.

He now shifts his focus to the baseball season with New Hartford this spring. Last year, he was the TVL’s Rookie Pitcher of the Year.

Here are five questions he answered for the Sentinel:

What’s the biggest thing you learned from the basketball season?

“It was not to put our head down. We just have to keep going and just battle. Every day is just competing.”

What’s your best memory from the basketball season?

“It was making it to the (state) final four and having a good time.”

It was the first time New Hartford advanced to the state final four in Glens Falls after the program earned its first Section III title in 15 years in early March.

Baseball is getting started and you were the TVL Rookie Pitcher of the Year. Do you have a preference between basketball and baseball?

“I’m focusing more on basketball. I hope to play basketball in the future, hopefully at college.”

Are there schools that you’re considering for basketball?

“Yeah, I’m talking to a couple right now. It is just the process.” Philipkoski didn’t say which schools he is talking to. Philipkoski, who will be a senior during the 2022-23 school year, said he doesn’t have a timeline for when he wants to make a decision.

What do you like to do outside of sports when you’re not playing basketball or baseball?

“I like to golf a lot.” He said he’s planning to watch The Masters this weekend. He’s hoping Tiger Woods wins in his first major event since his 2021 car crash.

He added that he also likes to “hang out with friends” and “I like to eat.”