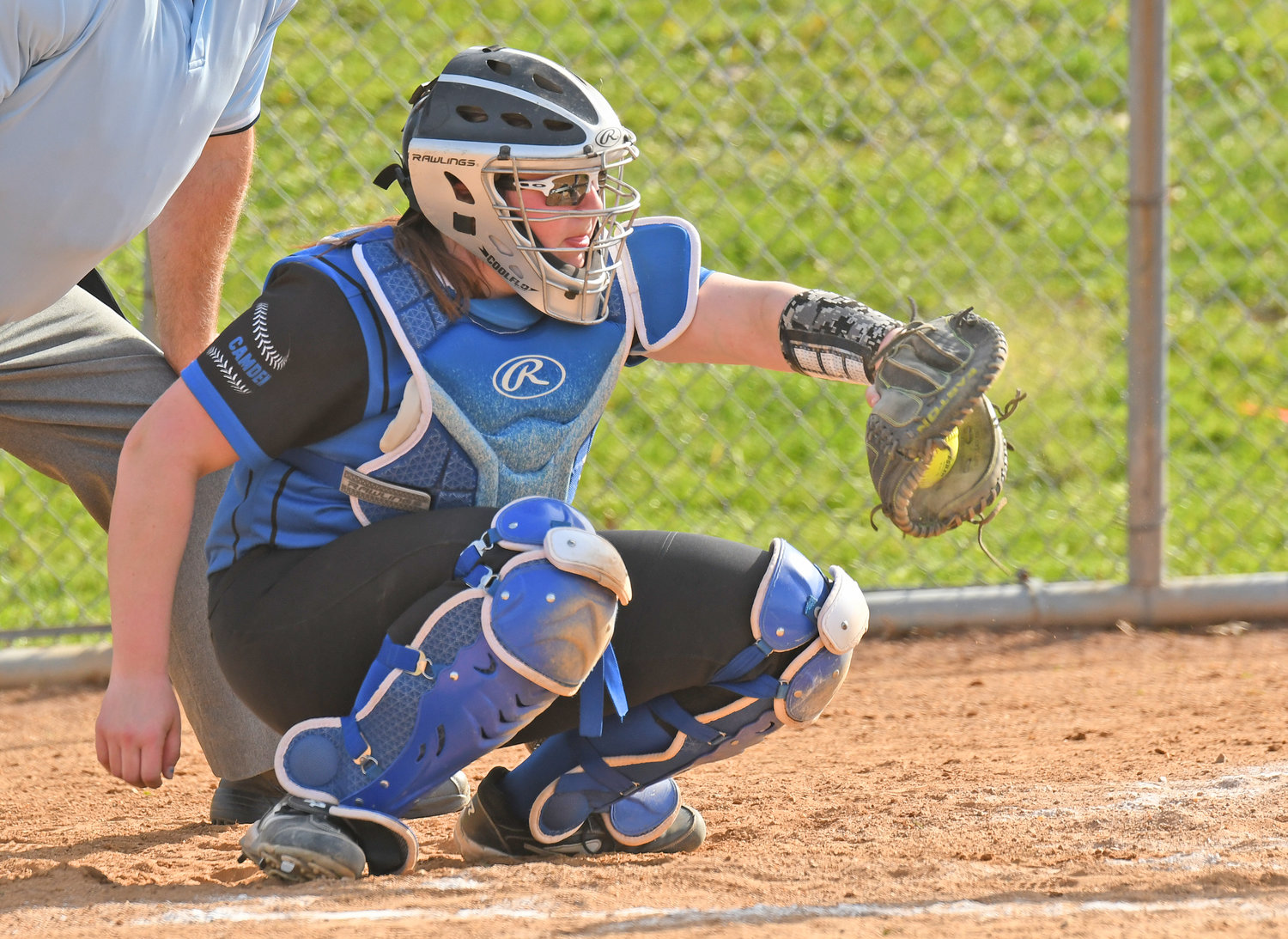 ON TARGET — Camden catcher Kaitlyn Findlay frames a pitch in action earlier this season. Findlay and the Blue Devils are off to a 7-0 start and she’s batting .500 in the middle of the lineup. Her 13 hits include three doubles, a triple and a homer. She’s driven in a dozen runs as well.
(Sentinel photo by John Clifford) 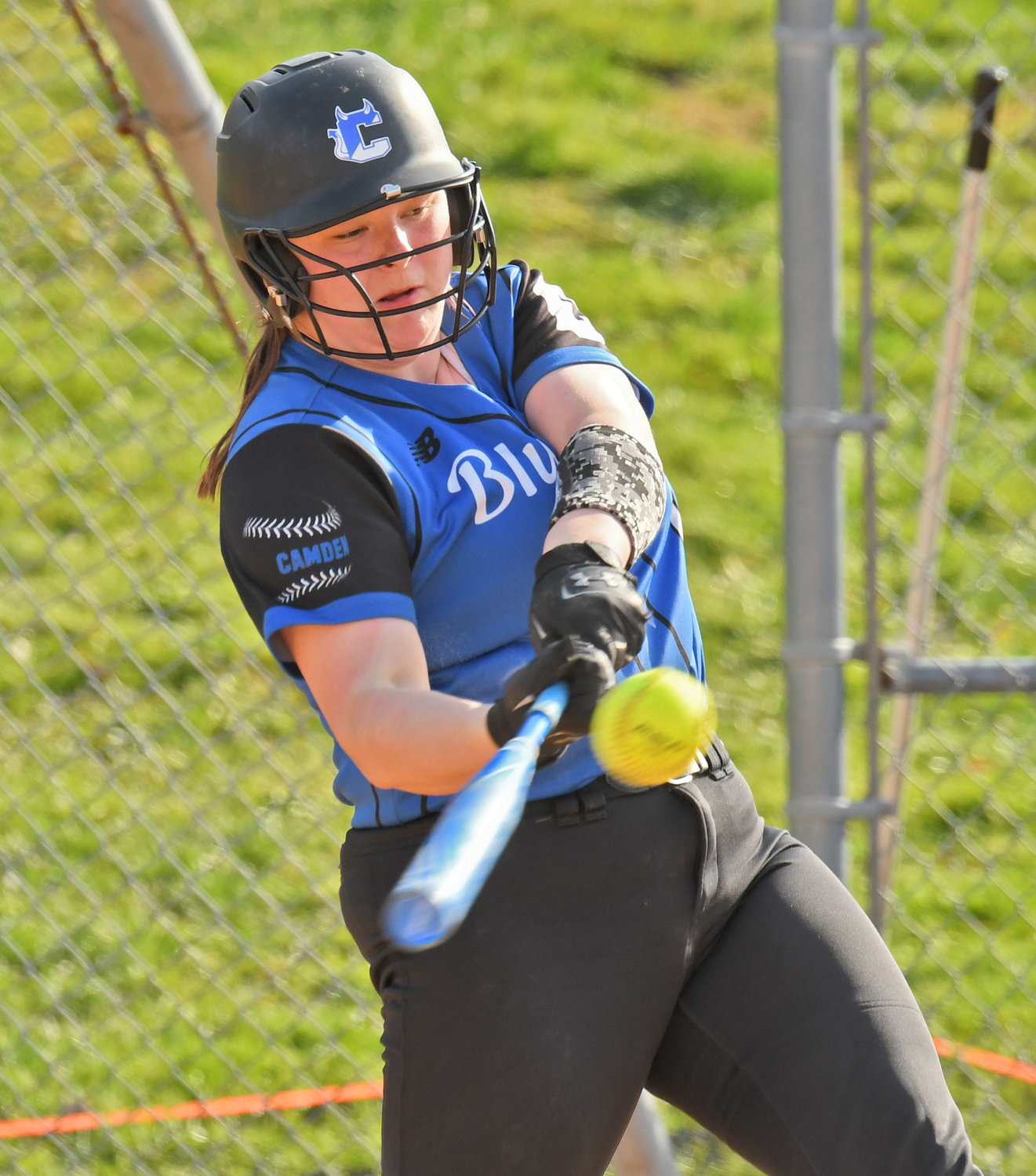 BLAST OFF — Camden junior catcher Kaitlyn Findlay makes contact in a game earlier this season. She's helped lead the team to a 7-0 start in pursuit of a Tri-Valley League title the season after the Blue Devils shared the title with Oneida.
(Sentinel photo by John Clifford)
Previous Next
Posted Friday, April 29, 2022 8:30 am
Steve Jones
Sports writer
email / twitter

CAMDEN — The Camden softball team has only lost three games since the start of last season, and one of the players who has helped the Blue Devils achieve so much success is junior catcher Kaitlyn Findlay.

Last season Camden was 17-3 and the co-champion of the Tri-Valley League. In those 20 games, Findlay batted .358 and slugged .552. She had 24 hits, eight of them doubles and one homerun. She drove in 16 runs as well. And behind the plate she gunned down eight would-be base stealers.

The Blue Devils were 7-0 going into Thursday’s league game at Utica Notre Dame. Findlay is batting .500 and slugging .808. Her 13 hits include three doubles, a triple and a homer. She’s knocked in a dozen runs.

How has Camden softball gotten this good in recent years?

“A lot of us girls play travel ball so we don’t just play for a few months in the spring time.” She continued: “The coach has a big impact on how the girls work together. If your coach is a little more strict you know what to do and what not to do. A structured coach helps that a lot.” That’s head coach Jed Musch she’s talking about.

“There’s so many of us that have played together now. We had eight returners from last year. It’s cool for me as a junior to be a part of that. People say ‘Look out for Camden, co-champs of the TVL.’”

“My personal goal is to always be the best leader I can be for the rest of my teammates, especially because we have so many underclassmen.” She added, “Being a good role model is something I want to do. I want other people to learn from what I’ve done.”

There are a few team goals, she said. One is to earn the outright league title this season. Another is to beat “our rival of Oneida.” The Blue Devils defeated the team they shared the league title with last season when they met the first time this season, 9-6 in Oneida. The two teams link up in Camden to end the Blue Devils’ regular season, on May 19.

“An important part of my game that I struggle with is confidence. We all make physical mistakes,” but mental game is important too, she said. “It’s very hard for something like that. The mental side of the game is hard to improve in a short time period. I see it sometimes when I’m down on myself but I pick myself back up.”

The junior said she wants to go to school in New York state to be close to home. She intends to study pre-occupational therapy and psychology. “I’m hoping to play softball in college as well,” she said. “I’d rather play for a smaller school and get the playing time.”

What do you do for fun off of the field?

“I also play field hockey. I enjoy winter activities, snowmobiling a lot. Hanging out with family and friends. We go on a family camping trip.” She said she also enjoyed the softball team’s pre-season trip to Myrtle Beach, S.C.