Jessica’s Heroes 5K Run and Walk to benefit those in the community fighting cancer is just around the corner. 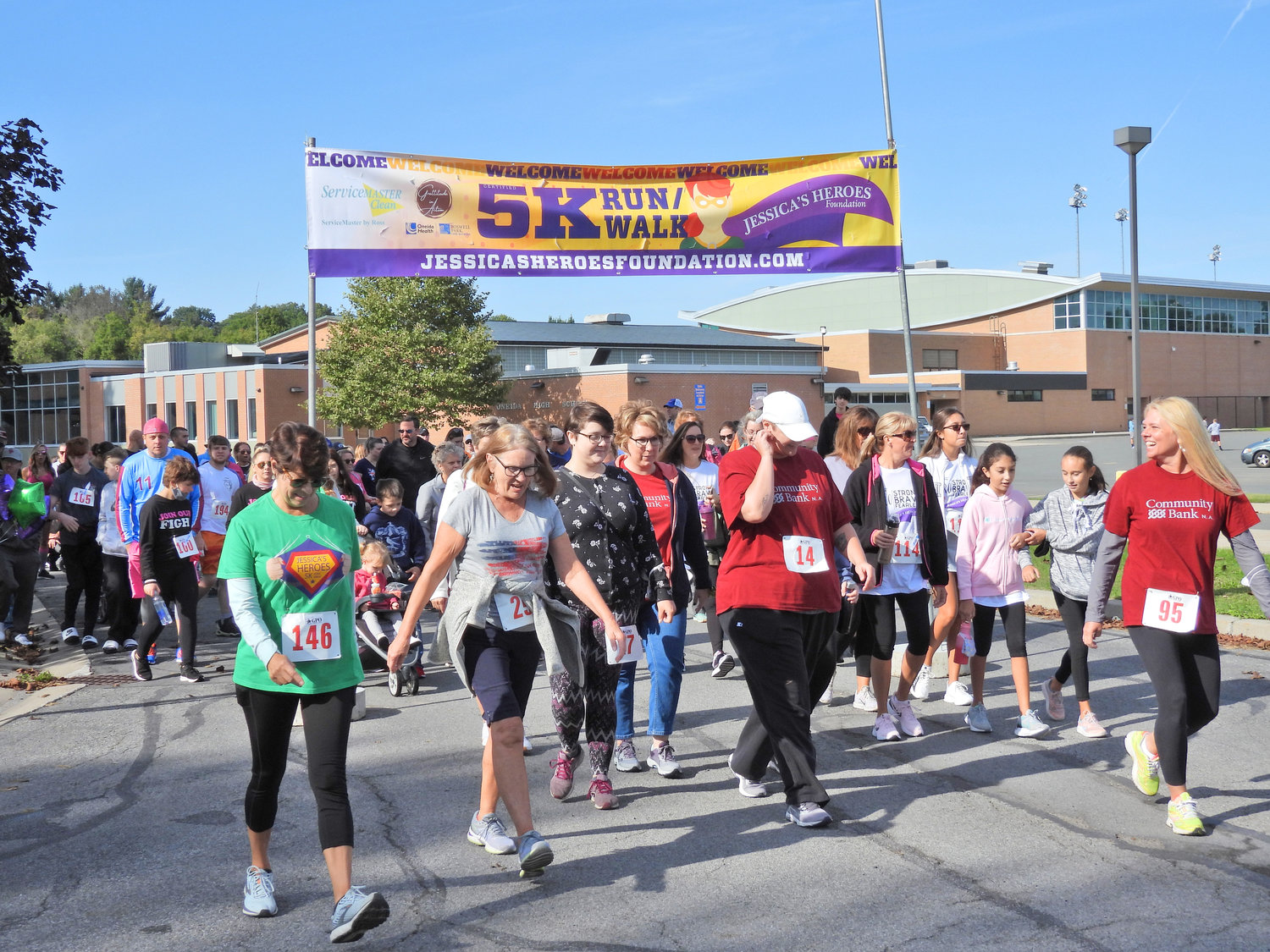 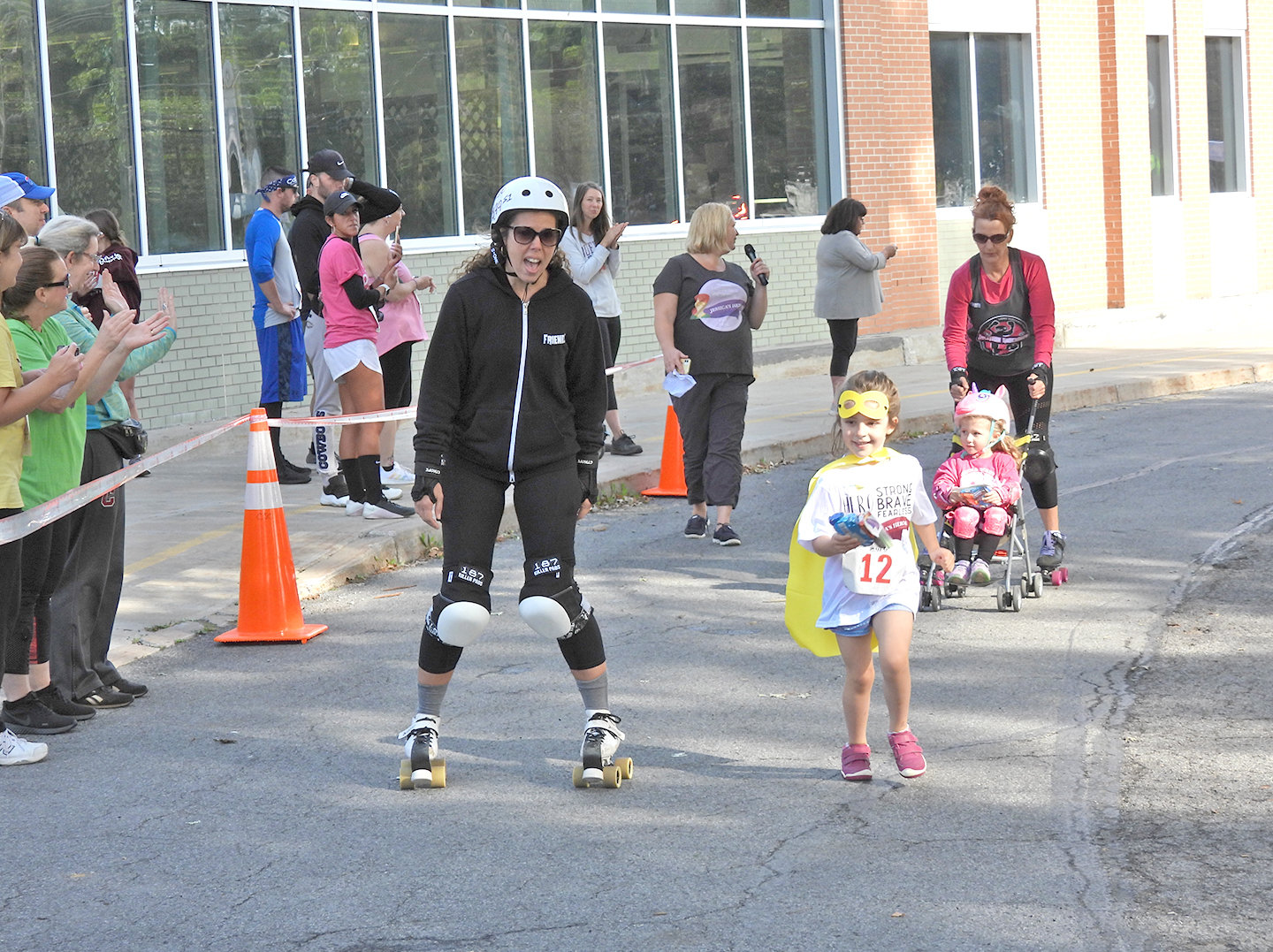 Jessica's Heroes 5K Run and Walk kicks off at 9:30 a.m. Saturday, Sept. 24, at Oneida High School. The Jessica's Hope lap will be .3 miles. This is in addition to the 5K, for a total of 3.4 miles, representing the age at which Jessica Froelick lost her battle with cancer — 34.
(Sentinel Photo by Charles Pritchard) 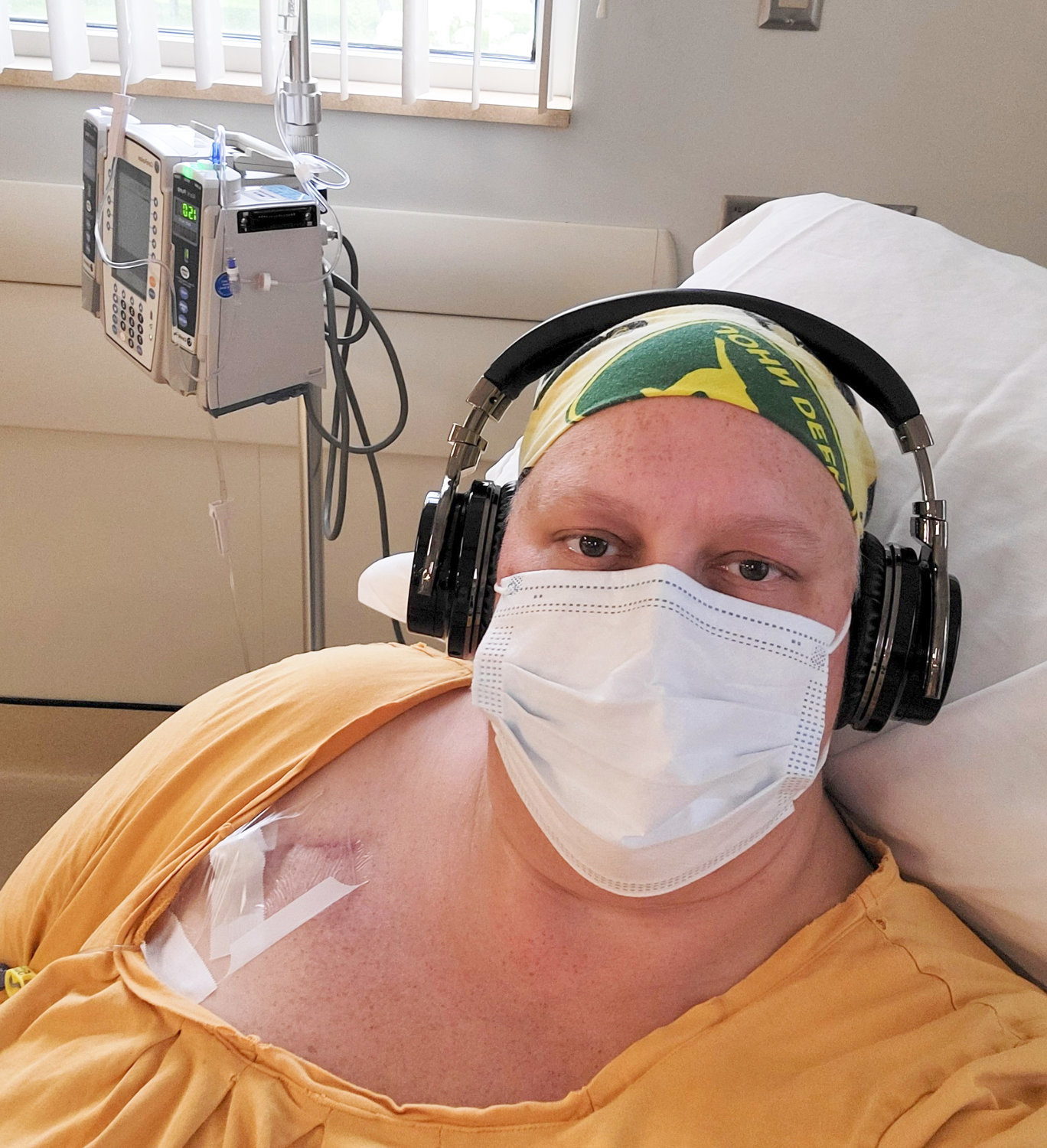 Deborah Stell, left, undergoes chemotherapy after cancer from her uterus metastasized to her lungs. Today, at right, Stell is recovering but as a result of the treatments, her hair has turned white, as shown in the photo above right. Instead of letting it get her down, Stell said, it actually delights her.
(Photos submitted) 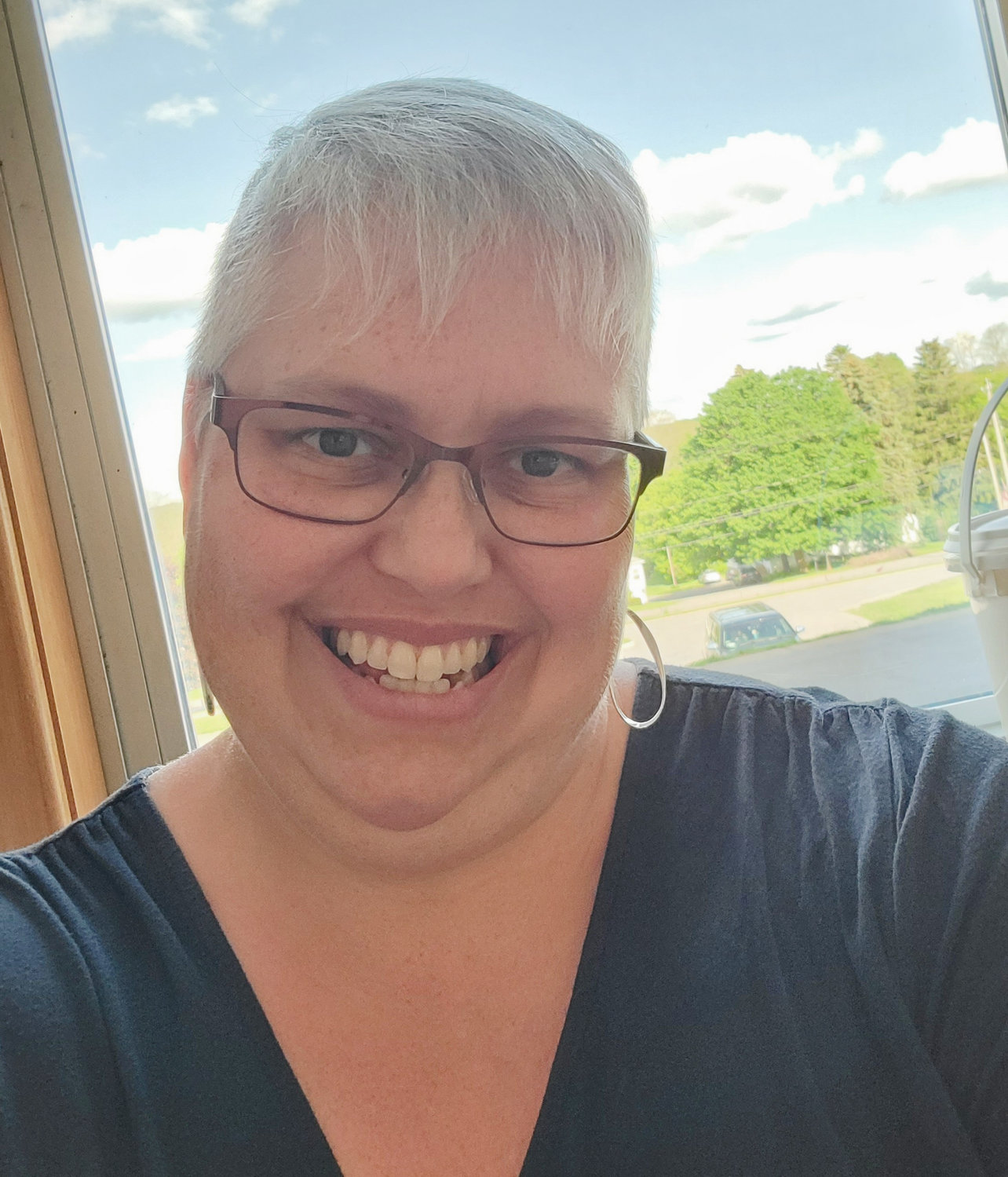 Deborah Stell is pictured, having recovered from chemotherapy. But as a result, her hair became white â something that doesn't get her down and instead delights h
(Submitted Photo)
Previous Next
Posted Thursday, September 15, 2022 3:00 pm
Charles Pritchard
Staff writer
email / twitter

Jessica’s Heroes 5K Run and Walk to benefit those in the community fighting cancer is just around the corner. The run/walk kicks off at 9:30 a.m. Saturday, Sept. 24, at Oneida High School.

New this year is Jessica’s Hope Lap. The lap is 0.3 miles. This is in addition to the 5K, for a total of 3.4 miles, representing the age at which Jessica Froelick lost her battle with cancer — 34. The lap itself is for cancer survivors and children ages 12 and older.

Jessica Heroes Co-Founders Amy Ross and Susan Jones said this lap is in honor of all cancer survivors in the area. Any survivors are invited to join in on this lap. Among those attending are Karen Searl and Deborah Stell — two cancer survivors who have fought back and are looking to the future.

“I live in Oneida, but I was born and raised in Wampsville. I graduated from Oneida High School, class of 1986,” Searl said. “I’ve got four adult children ...  and I have stage four metastatic breast cancer.”

Searl got her diagnosis in January 2019. “And when I got that diagnosis, I was given six months to live.”

After undergoing routine surgery to remove her gallbladder, Searl met with her doctor to get clearance to return to work. Searl had complained that her chest hurt and thought it might have been a blood clot.

“They did an ultrasound and found my bones were covered in lesions,” she said. “[The lesions appeared] in the two weeks I had been recovering from my gallbladder surgery. However, the tumor had been there for longer.”

Searl did everything right: she kept an eye on her body and got her regular mammogram. Before her surgery, Searl had received a complete workup and was given a clean bill of health.

But the tumor had hidden behind breast tissue and had time to grow and spread. And now, Searl said, 90% of her bones are covered in lesions.

Treatment began immediately. She was given anti-cancer medications and radiation treatments for the lesions that weakened her bones.

“It’s like osteoporosis. The lesions leech the calcium out,” she said. “So I have monthly shots that put the calcium back in my bones. But it’s like this round-robin effect to keep me going.”

For some cancer patients like Searl, the fight will never end.

“I’ll never be in remission,” she said. “But it’s under control. My tumor isn’t highly active right now. I have to go to the doctor monthly and get four shots every month to treat my symptoms. When I start hurting, I get radiation to treat any areas in pain. And we’ve been doing this for four and a half years now.”

“You can’t change what happens to you,” she said. “It’s one of those things where you have to keep moving forward. ... I didn’t want to sit on the couch and dwell on it. I wanted to live. I have four children and grandchildren that I don’t want to miss.”

When asked if she had anything to say to people with their own battles with cancer, Searl said, “The most famous line people give you is ‘You got this,’ and I want to look at them and say ‘No, I don’t.’ You have to take it day by day. You have to get up, and if it takes an hour to get dressed, it takes an hour. You’re on your time. Don’t do it for other people, do it for yourself and find a reason to live — and focus on it.”

Stell moved to Munnsville in 2015 and graduated from Waterville High School. “I was diagnosed in 2019 after having some female issues my normal OB/GYN couldn’t resolve,” she said. “I got a second opinion, and the results showed that I had uterine cancer.”

Stell met with the surgeon from Roswell Park on July 10, 2019. “The doctor realized how serious the problem was, and they had me in surgery six days later,” she said.

Stell had a hysterectomy and got the good news that it was contained and didn’t spread to her ovaries. She thought it was done and over for her, but that wasn’t the case.

“In 2021, I started getting a large lymph node in my neck,” she said. “… The doctors did a sonogram and a biopsy, and everything looked fine until they did a CT scan. And they found something in my chest.”

A biopsy was done on the mass, which turned out to be cancer. Stell got the news she didn’t want to hear: it was her uterine cancer back for round two. It had metastasized to her lungs.

Cancer treatments began at Roswell Park Cancer Center in Oneida from July to December 2021. But Stell’s fight wouldn’t be that easy.

“The first drug I was given was called Taxol,” she said. “That was the most recommended type of drug for my cancer, and there were only really two choices. As to be expected, I had some side effects after my first round of chemo. But during my second round, I remember sitting in the chair and wondering why I felt so warm.”

All of a sudden, nurses started rushing to Stell. She had turned bright red from head to toe.

“I had an allergic reaction, my throat was closing, and I was undergoing anaphylactic shock,” she said. Her only option was to take the other chemo and hope it would work well enough.

Immunotherapy in the form of oral medication and scans every three months followed. But in a turn of good luck, Stell said the drug that was supposed to suppress the tumor has actually caused it to shrink.

“Every scan has shown shrinkage. The doctors said this wasn’t normal, so I guess I’m not normal,” she said jokingly.

Stell and Searl are thankful for the help they’ve received from Jessica’s Heroes, whether it was a ride to treatments or being there for moral support.

“It’s not what Jessica’s Heroes did financially; it was knowing there was someone else out there who went through or is going through what I’m going through, and I could talk with them,” Stell said. “I needed that to help me get through this journey, and knowing that I had that support, I could buck myself up and that you take the good with the bad. And you reach out when you need someone to lean on. That’s what Jessica’s Heroes have done. Everyone goes through a different journey, but you go through the same journey in many ways.”

Stell and Searl will participate in Jessica’s Hope lap, with Searl speaking before the event.

For more information on Jessica’s Heroes, to find resources, or sign up for the 5K, visit: https://jessicasheroesfoundation.com/