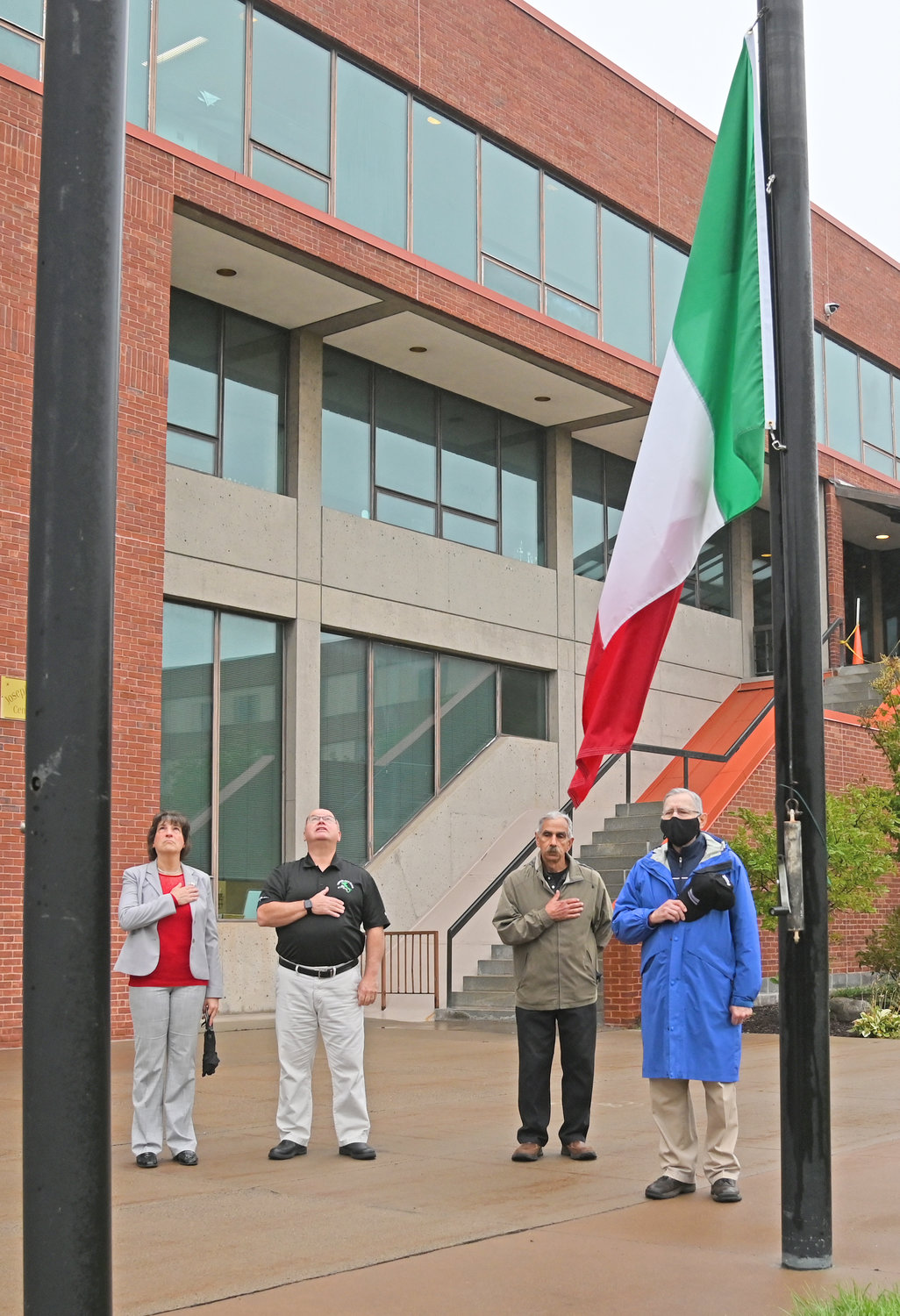 CELEBRATING ITALIAN HERITAGE — Rome Mayor Jacqueline M. Izzo, joined by David Smith, Dave Gualtieri and Joe Bottini, have hands over hearts during an Italian flag-raising ceremony at Rome City Hall on Tuesday. There are several competing thoughts about the symbolism of “il Tricolore.” One is that the green stands for freedom; the white for faith and purity; and the red for love. Another holds that the green symbolizes the countryside; the white for the snowy Alps; and the red for the blood shed by the people over Italy’s history. During the ceremony, participants were able to hear “Il Canto degli Italiani,” Italy’s national anthem, although these participants refrained from joining in a full-throated rendition as is the tradition of “the Azzurri,” Italy’s storied national soccer team.
(Sentinel photo by John Clifford) 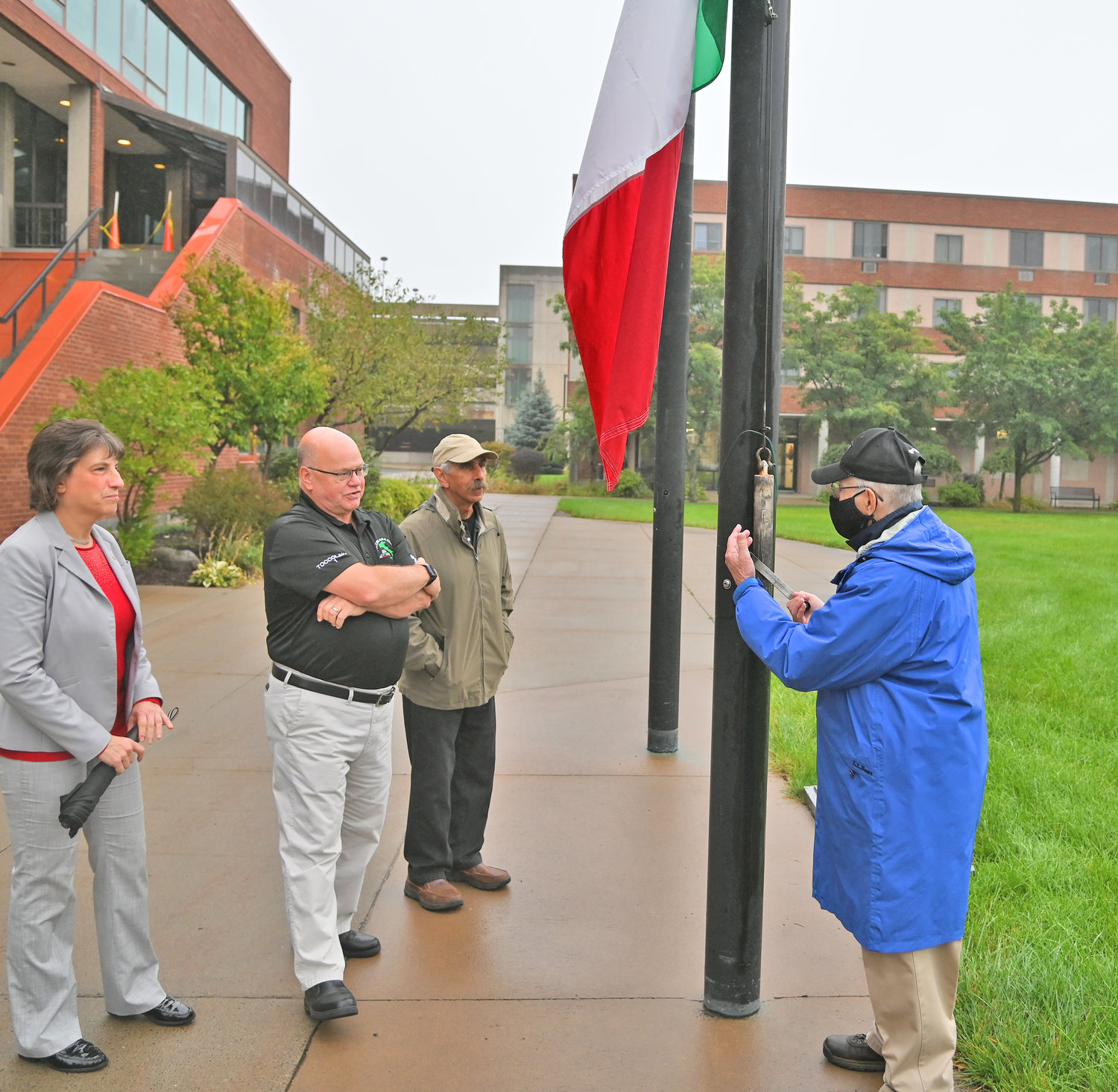 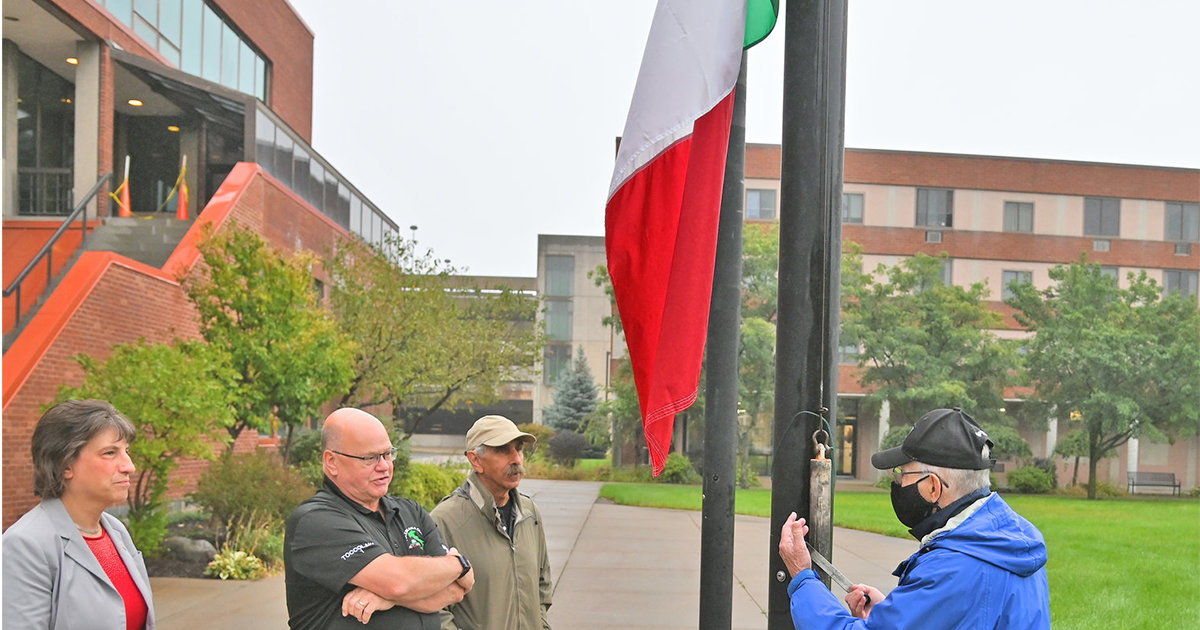 Members of the Italian Heritage Club of the Mohawk Valley, along with several Rome residents, kicked off Italian-American Heritage Month in the city on Tuesday, Oct. 5, with a ceremonial flag raising in Rome — following a similar event in Utica on Monday.

The month is geared to raise awareness and also to celebrate the contributions and achievements of Italian-Americans.

“In the early years of Italian immigration to the Mohawk Valley, Italians were not welcomed, facing discrimination and therefore, assimilation was slow as they tended to live among themselves in small communities,” reads an announcement by Joann Cavo Campbell, president of the club.

“Italian immigration to Rome, NY, occurred between 1880-1930,” it added. “Those who arrived in Rome were sponsored by family or friends who had already settled here....They worked in the factories in east Rome and thus began to settle there, replacing Irish as
the dominant ethnic group.”

“As we raise the flag today, we will be honoring the resilience, hard work and contributions of these early immigrants and their descendants not only to the greater Rome community but to the country as well,” Campbell added.

In the early 1920s, Campbell said, it appeared that some cemeteries appeared to discriminate against Italians being buried there, so Joseph Bottini, a funeral director, began his own cemetery on a 20-acre site now known as St. John’s Cemetery.

“This was the first ‘Italian Colony’ in New York State to boast of its own cemetery,” Campbell wrote, adding the “cemetery was founded by Joseph Bottini, Michael Duly and Nicholas Rienzo.”

Gualtieri, wrote Campbell, is one of “Rome’s first Italian pioneers.”

“In 1904, he opened a small grocery store on East Dominick Street, which is still in existence today and is run and owned by his grandson, David Gualtieri,” the announcement said. “His store became the place where Italian immigrants would come for assistance (as) Rocco spoke and wrote in both Italian and English. He also became a private banker as many of the immigrants did not trust the banks.”

Bella and Luna top names for dogs, cats for 2021

Trupanion, which offers medical insurance for cats and dogs, recently surveyed its database of more than 650,000 insured pets for the most popular cat and dog names of 2021. For our canine …