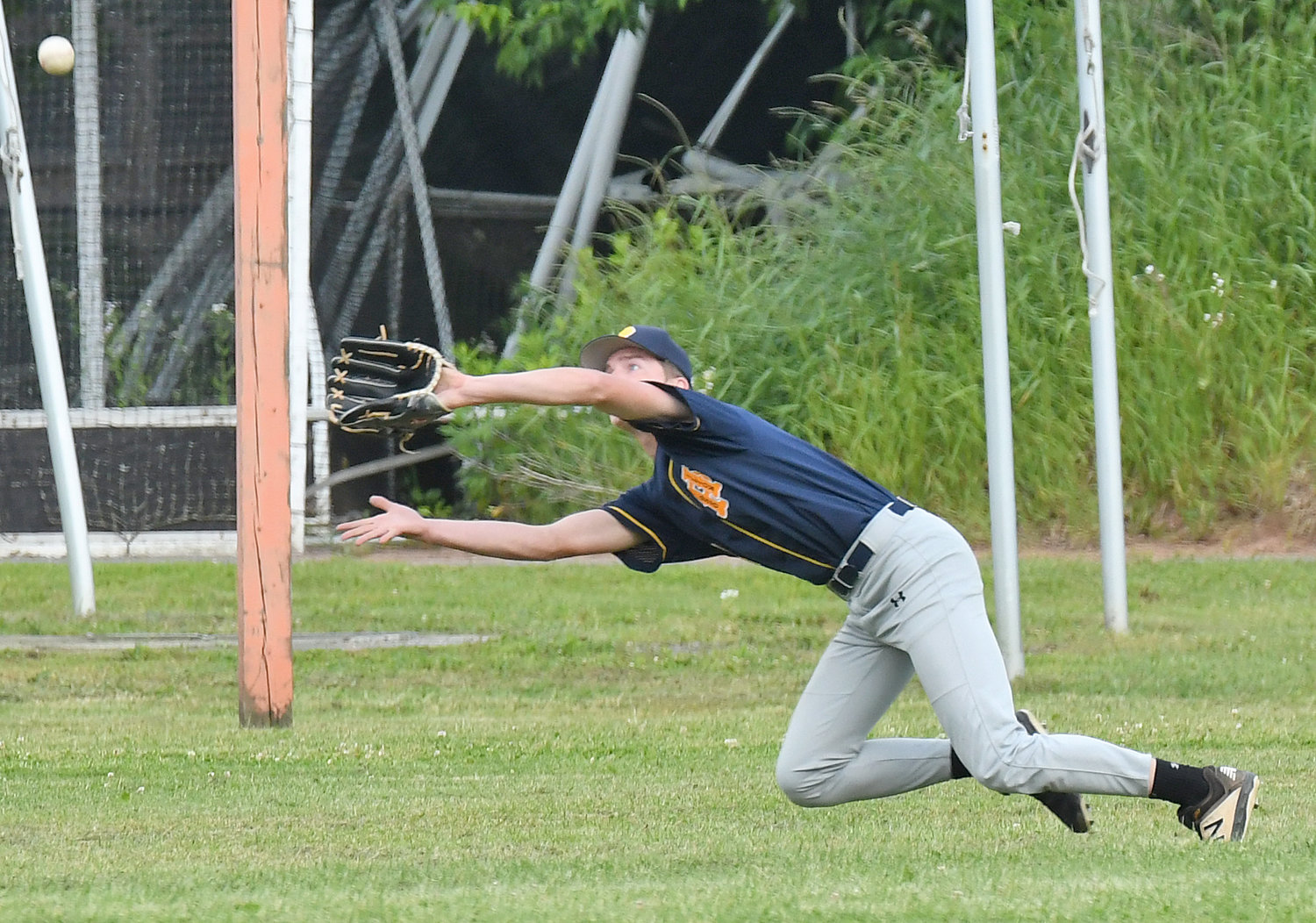 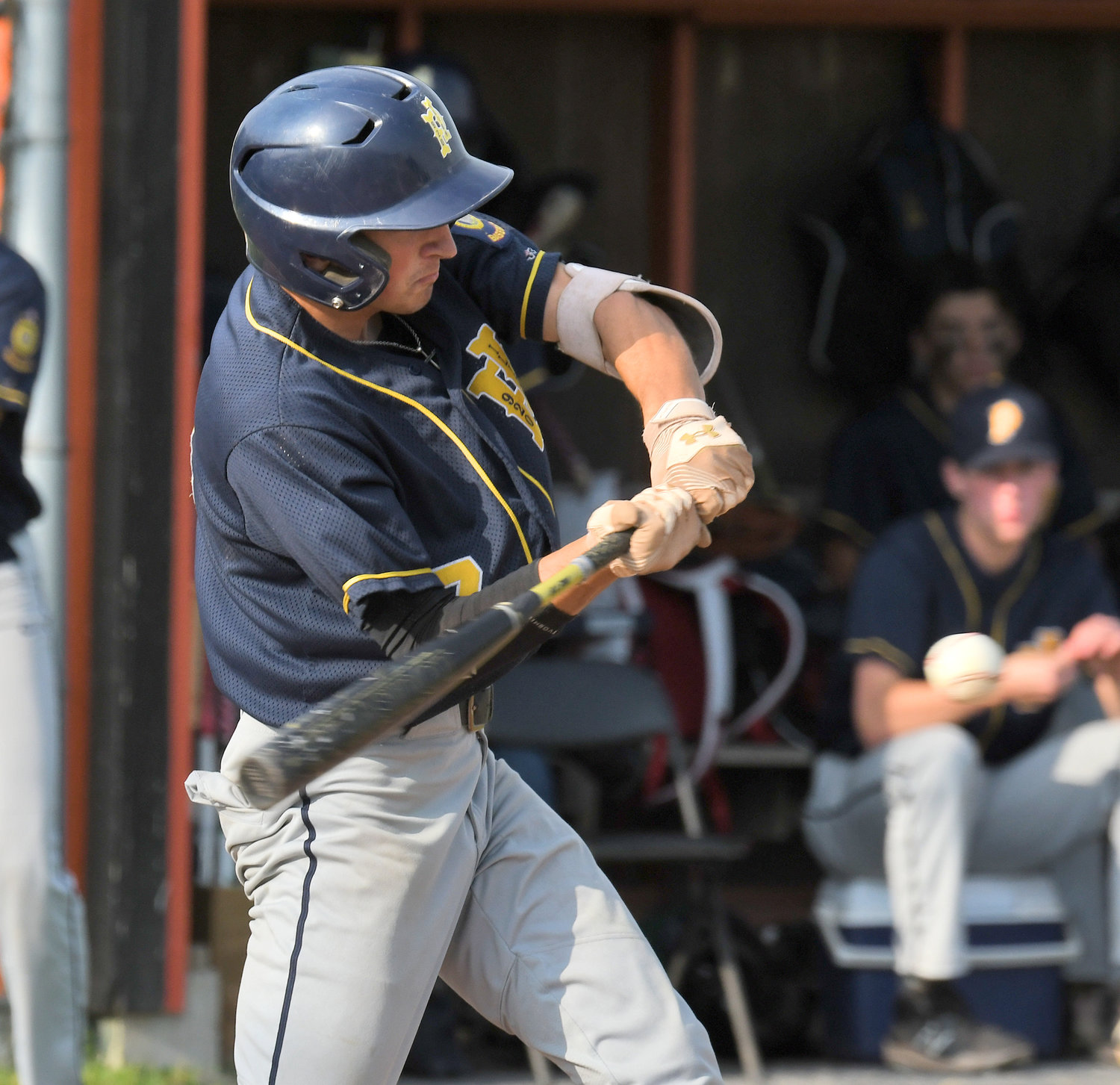 Ilion Post’s Alan Meszler drive a ball deep into the outfield Tuesday against Smith Post in Rome. He tried to stretch a double into a triple but was tagged out at third. The hit drove in Ilion’s first run and he added a two-run triple later to help the team to a 5-4 win.
(Sentinel photo by John Clifford)
Previous Next
Posted Wednesday, June 22, 2022 8:21 pm
Steve Jones
Sports writer
email / twitter

Ilion Post slowly built a five-run lead then hung on for a 5-4 win on the road Tuesday against Smith Post of Rome in District V American Legion baseball.

The visitors struck quickly to grab a 1-0 lead. Leadoff hitter Tanner Warren singled and stole second, advancing to third on an error on the steal attempt. He scored on Alan Meszler’s RBI double, though Meszler was gunned down trying to make it a triple. They made it 2-0 in the second when Hunter Smith walked and later scored on an RBI groundout by Warren.

Meanwhile Noah Carpenter was stifling the Smith offense. He would end the night with a win after going 4 2/3 innings and allowing three earned runs on six hits and four walks. He struck out seven.

The Ilion offense gave him a five-run cushion with three runs in the fourth inning off starter Marco Macri. A two-out single by Nick Greene scored Jeff DeSarro, then Meszler blasted a triple that drove in William Maxwell and Greene.

Smith’s offense finally came to life in the fifth when the team generated three runs to cut the lead to two. Damon Campanaro led off with a walk and Derek Holmes singled behind him. Campanaro came in on a wild pitch and then Macri singled to score Holmes. PJ Summa singled with two outs to drive in Macri. That was it for Carpenter, who gave way to Warren, the team’s closer. He retired the next batter to end the rally.

Ilion coach Tom Moreau said getting the first five runs “was huge,” and being able to hand off a lead to Warren was key. Warren, he said, “did a real good job finishing up.”

Smith would add a run on an RBI groundout by Holmes in the sixth to score Dillan Melchiore — who doubled to start the inning — but Warren retired the side in order in the bottom of the seventh to earn the save.

Moreau has spent 30 seasons getting players from a number of high schools in the valley and even some college players to jell into a legion ball team. The key, he said, is “trying to get them early in the season to know each other and see what they can do physically.” Having seven college students on the team has helped, he said. “We have a lot of returning college players, which has helped us tremendously as far as leadership.”

Meszler, who plays for Mohawk Valley Community College, said having players from various high school and college teams means plenty of position battles, which “motivates them a lot.” Also, “we get along very well.” The team, he said, has chemistry despite it having players who’ve played for six different local high schools.

Meszler said the early lead was “very important. If you don’t do that early in the game it’s more of a challenge to get that win.”

“We’ve been hitting pretty well so hopefully that continues for us,” Moreau said.

Macri took the loss, going 6 2/3 innings and allowing five runs, four of them earned. He gave up eight hits and walked four while striking out five.

Smith coach Ryan Hickey gave credit to Carpenter, who just finished his freshman year on the pitching staff at Norwich University. “Hats off to their pitcher. He’s one of the best in the league.” But, he noted, “Marco pitched us a good game and gave us a chance to win.”

“The talent’s there,” Hickey said of his team, which has nine players back from a second place finish last summer in the state tournament. “They can hit with anybody. The defense has to tighten up.” And when it does, he said, “Everything will come together.”

Smith was right back in action Wednesday hosting Adrean Post. Results were not available at press time.

Adrean Post scored five runs in the first two innings but still needed a four-run sixth to hold on for a 10-7 win on the road against Utica Post Tuesday.

Stats for Adrean were not submitted.

For Utica, Angelo Podagrosi took the loss. He allowed six runs, four of them earned, in five innings. He gave up nine hits and walked one. He struck out six.

Josh Duval had three doubles and three RBIs for Utica. Kyle Majka had a single and triple, and he scored twice and drove in two runs.

Utica was at Ilion Post Wednesday. Results were not available at press time.