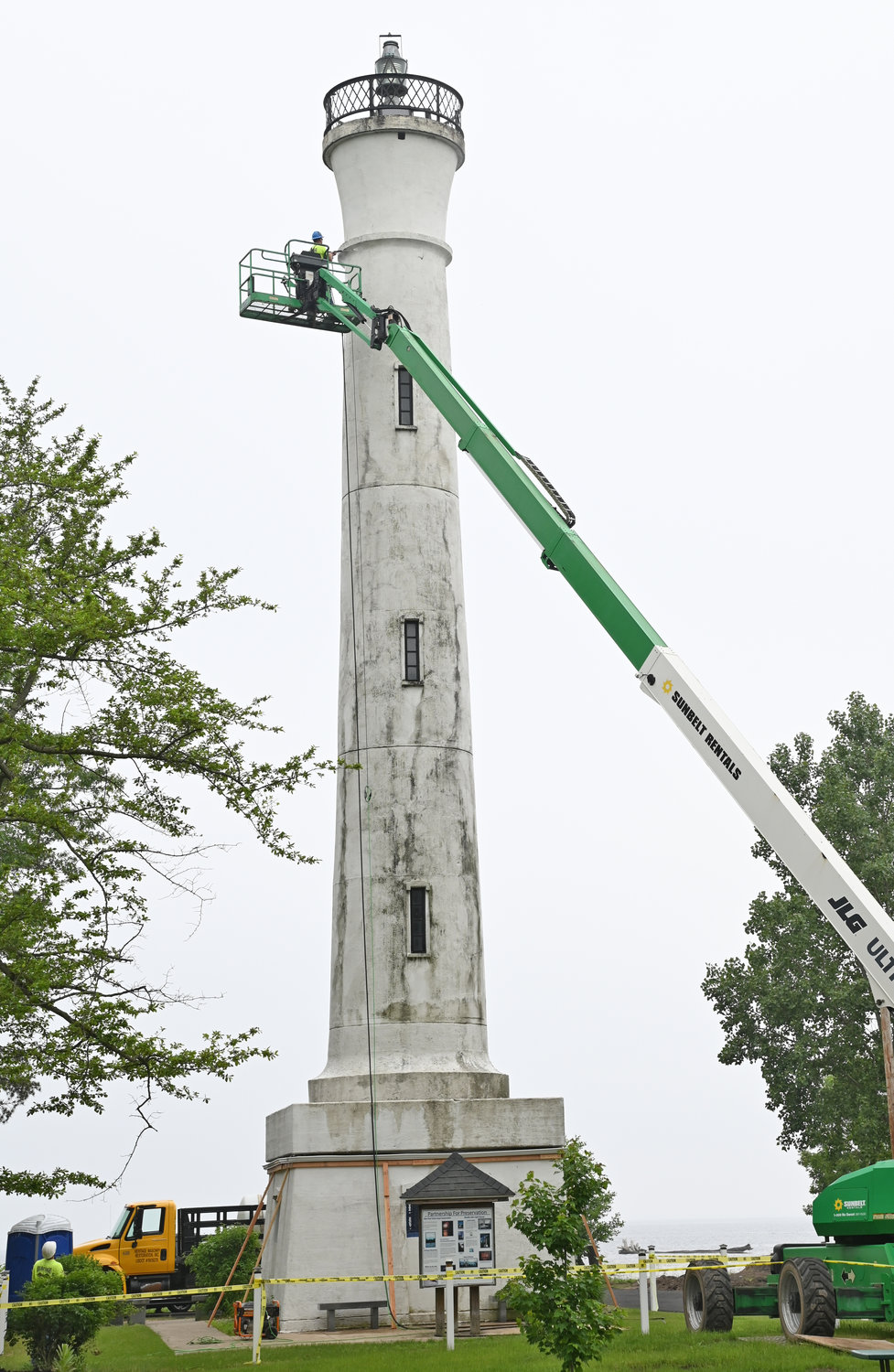 GETTING IN TIP-TOP SHAPE — New York Power Authority crews pressure wash the Verona Beach Lighthouse on Wednesday afternoon as preparations are under way for the installation of LED lights as part of the Canal Corporation’s Iconic Lighting Project. The project will help to shine a spotlight on the historic structure and its place along the Erie Canal and Oneida Lake.
(Sentinel photo by John Clifford) 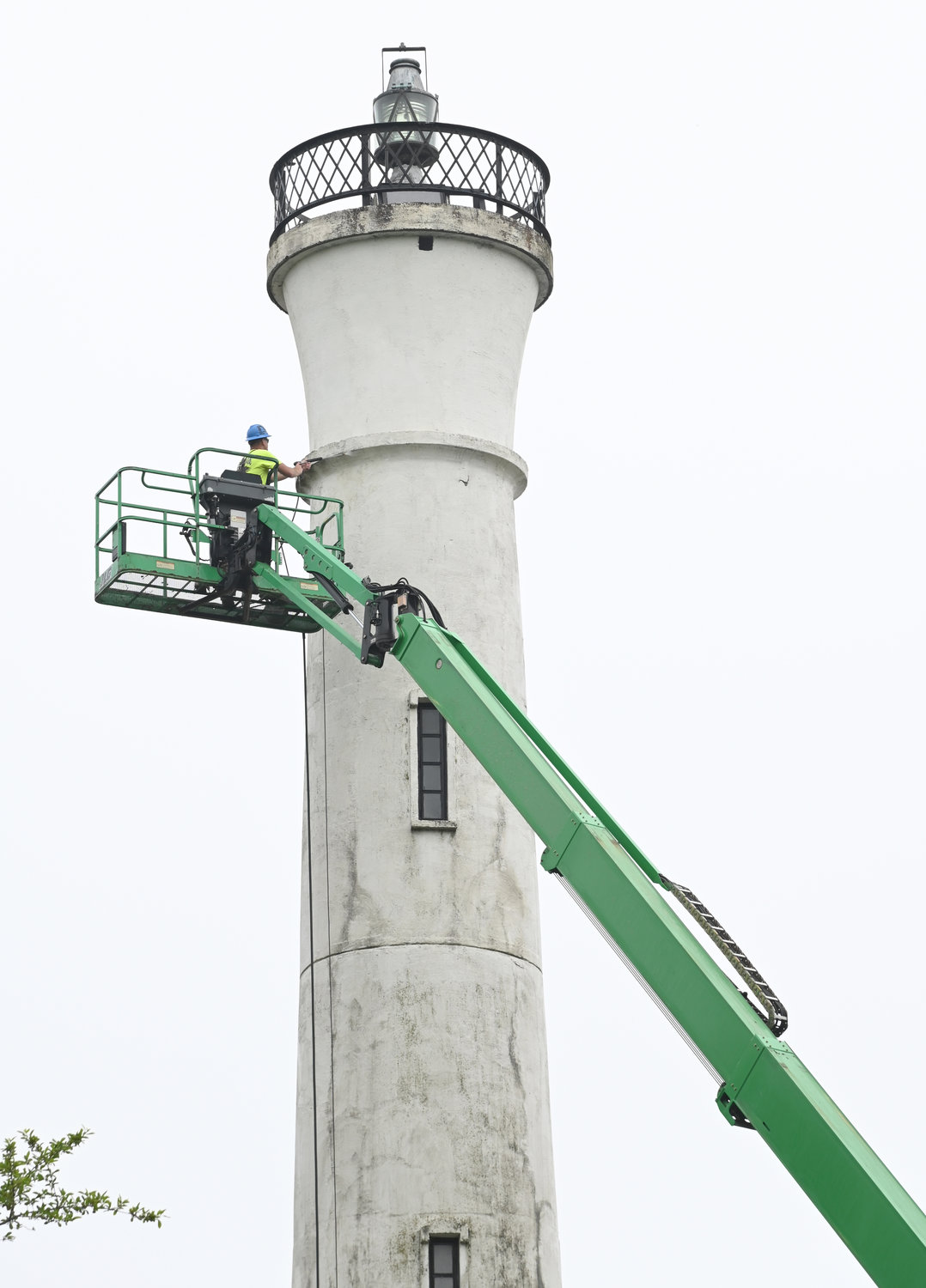 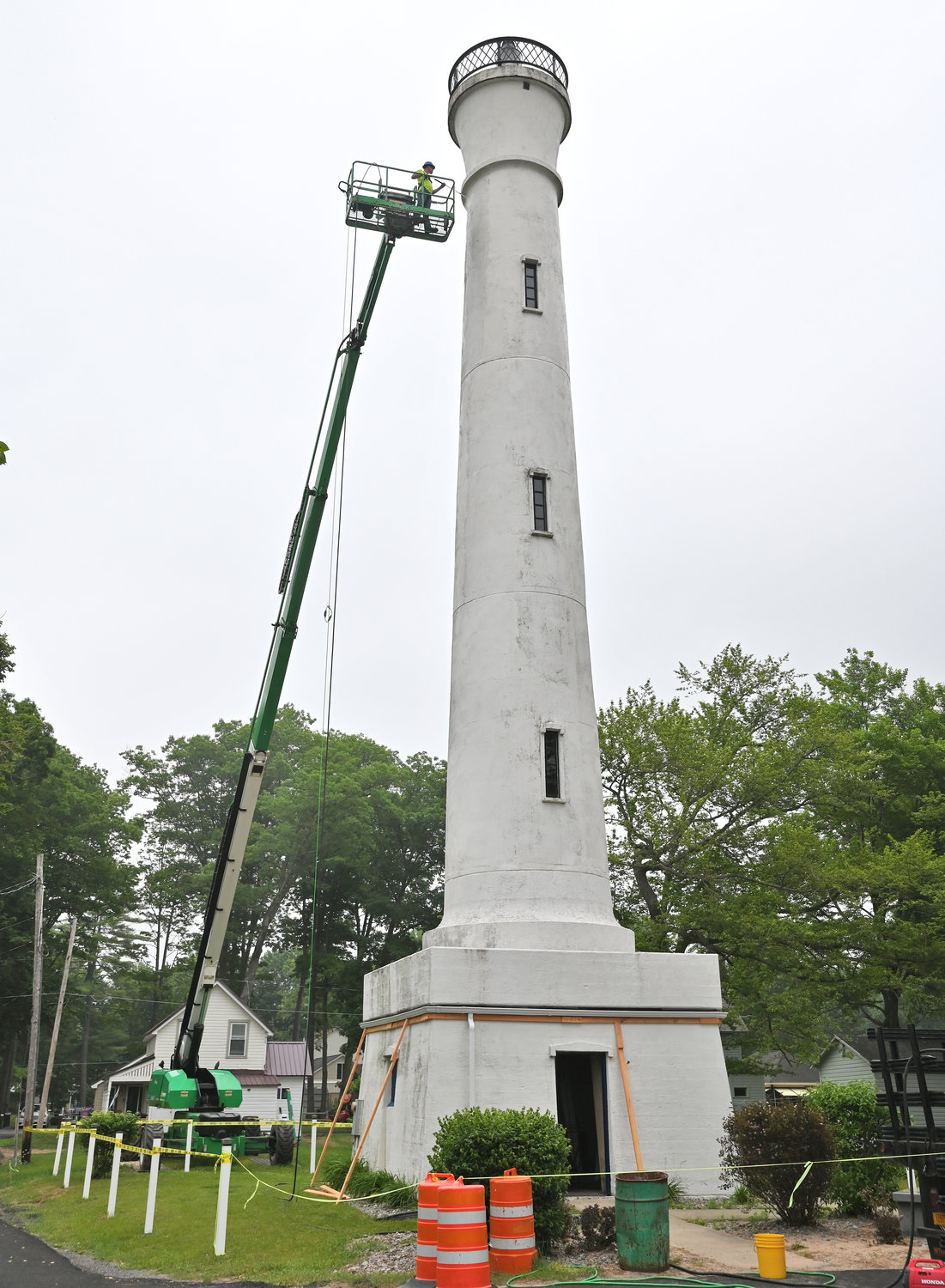 CLEAN — New York Power Authority crews pressure wash the Verona Beach Lighthouse on Wednesday afternoon as preparations are under way for the installation of LED lights as part of the Canal Corporation’s Iconic Lighting Project. The project will help to shine a spotlight on the historic structure and its place along the Erie Canal and Oneida Lake.
(Sentinel photo by John Clifford)
Previous Next
Posted Saturday, June 12, 2021 12:00 pm
Charles Pritchard
Staff writer
email

VERONA BEACH — The Verona Beach Lighthouse will soon be all aglow as the New York Power Authority and Canal Corporation rolls out its Reimagine the Canals program.

NYPA and the Canal Corporation are investing $300 million over five years to reimagine and revitalize the state’s iconic Canal system. This initiative is in addition to NYPA’s annual $140 million investment into the Canal’s continued maintenance, operation, and infrastructure. As part of this initiative, structures along the Erie Canal in several communities — including Verona Beach — are getting some much-needed attention via cleanings, maintenance, and the installation of LED lights as part of the Iconic Lighting Project.

“The Iconic Lighting Program is about the illumination of iconic Canal infrastructure,” Shane Mahar, NYPA spokesperson, said. “And the Verona Beach Lighthouse is on the Canal, so through the Reimagine the Canal Program and Iconic Lighting Project, we will be illuminating the Verona Beach Lighthouse with LED lighting to really (shine a) spotlight on it and highlight its place in the community.”

The Verona Beach Lighthouse has stood at the eastern end of Oneida Lake since 1915 and was built by the Lufer and Remick Company of Buffalo, along with two others — one located at Frenchman’s Island near the western end and a third across the Lake’s outlet from Brewerton.

Work on Verona Beach Lighthouse started just within the last week, officials said, with crews doing a gentle cleaning of the structure. “As a historic structure, anything we do has to be in compliance with the New York State Parks Recreation and Historic Preservation,” Mahar said.

In addition to the cleaning, LED lights will be installed around the Verona Beach Lighthouse structure this summer, he added, with an unveiling shortly after.

“All of our projects as part of Reimagine the Canals program are cool, but the Iconic Lighting Project is a chance to see these structures that have been part of communities for so long and illuminated in such a way they can be a focal point for the community they’re in,” Mahar said. “It’s spectacular.”

Ray Hanson, president of the Verona Beach Lighthouse Association, agrees with Mahar and is happy to see attention given to something many people in the community have worked to preserve.

The Verona Beach Lighthouse Association is a non-profit charity officially formed in 2002 that is dedicated to the restoration and preservation of the Verona Lighthouse.

“The Verona Beach Lighthouse Association is excited to see these renovations,” Hanson said. “We’ve been trying for years to get something done with the Lighthouse, and anything NYPA does is a bonus as far as I’m concerned.”

But Hanson does have a few concerns he voiced, namely about cars.

Hanson lives right across the road from the Lighthouse and said if there’s more traffic into the area, there’d be a lack of parking.

“It’s not really big enough for a lot of cars,” he said. “You can probably get around 12 cars in here, but after that? Anyone who drives down the road is going to have to back out. But time will tell what will happen.”

The Erie Canal was constructed for commercial traffic but has transitioned for the past several decades to a recreational thoroughfare.

“For the better part of the last 40 to 50 years, the Erie Canal has been transitioning to a recreational waterway,” said Mahar. “And because of how the canal system was developed and all the towns that grew from its banks, many of Upstate New York’s communities are next to the canal or very close to it.”

To that end, projects like this are taking place all across the Erie Canal to make it a better destination for local residents and tourists.

Out in Brockport, Mahar said, there are plans to build a pedestrian bridge over the Erie Canal to connect SUNY Brockport to the Empire State Trail; Wetland enhancements are being done at the Northern Montezuma Wetlands Complex, utilizing Canal waterways; and in Schenectady, there are initiatives to mitigate ice jams using tug boats.

But no matter what the future holds for the Erie Canal, NYPA and the Canal Corporation are working to keep it part of the community for years to come.

“We’re investing in the canal system to revitalize it, keep it active, and keep it a driver of economic development in New York State,” Mahar said.

For more information about the Reimagine the Canals program, visit www.ny.gov/programs/reimagine-canals-initiative