Humpf leads HP bowling teams on and off lanes 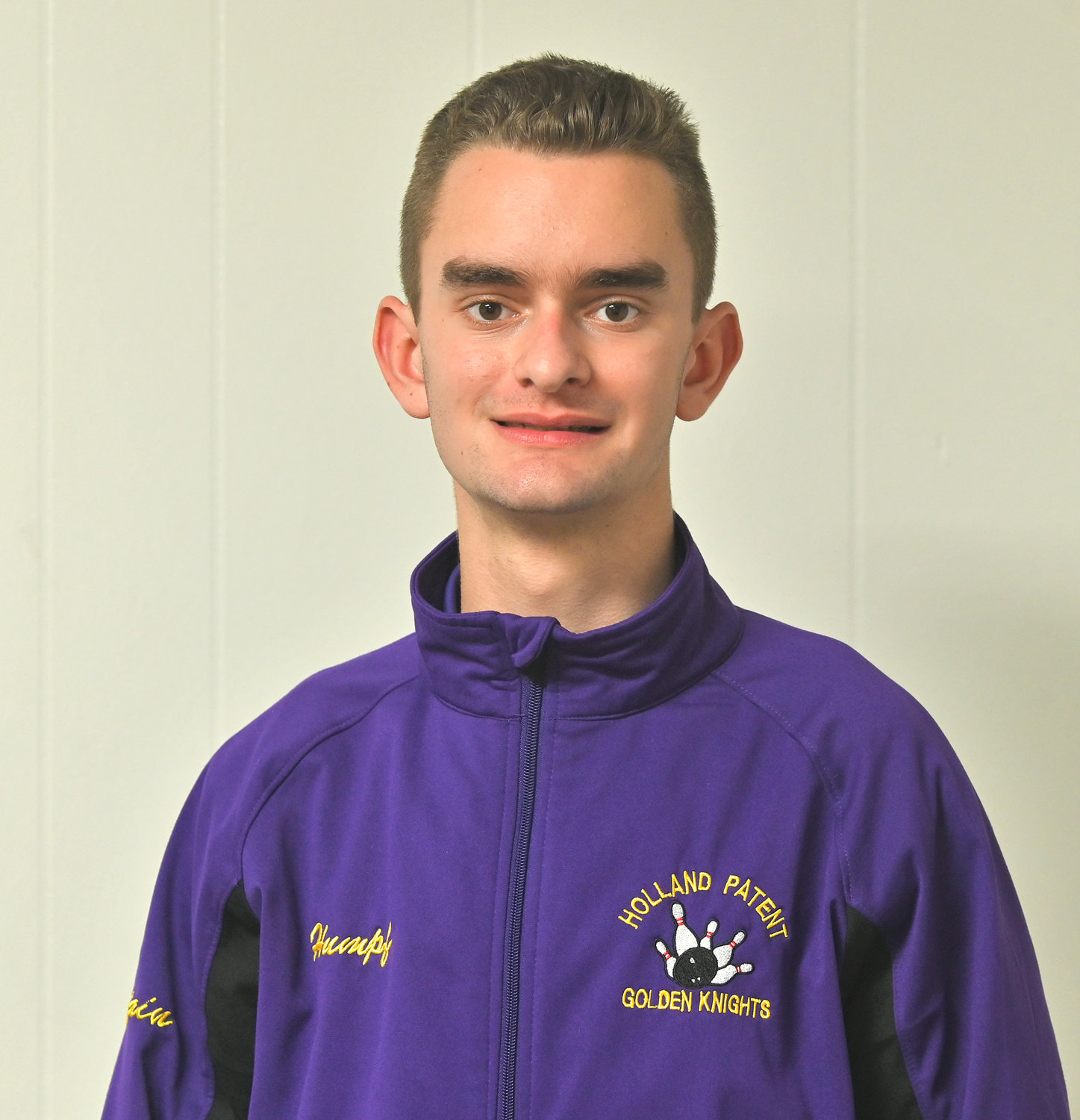 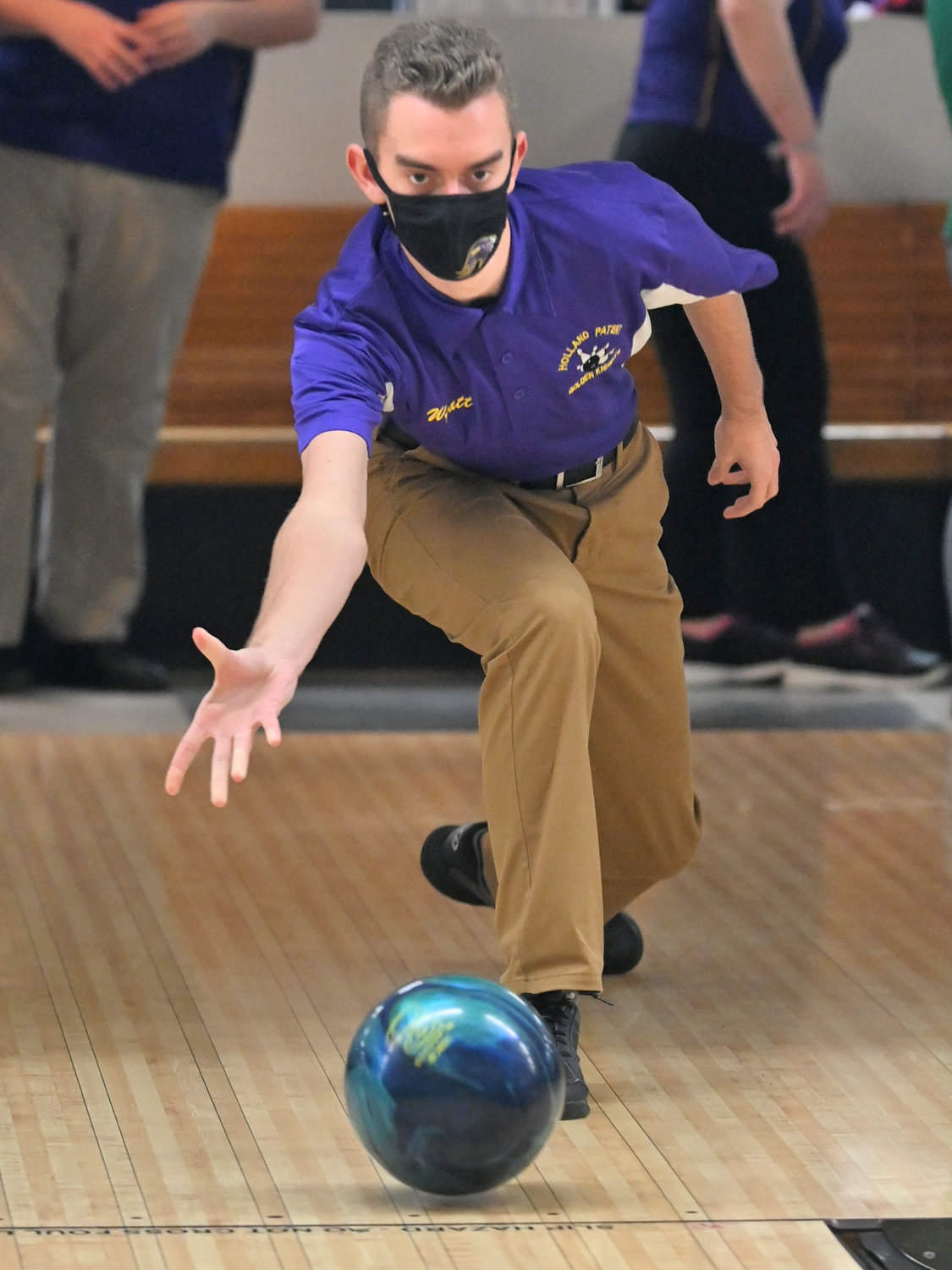 SENIOR CAPTAIN — Holland Patent senior co-captain Wyatt Humpf rolls at King Pin Lanes in Rome on Thursday, Jan. 13, against Herkimer. His first effort of the day was a strike. He's been bowling for HP since eighth grade and spent the last two seasons as the team manager for the football team.
(Sentinel photo by John Clifford) 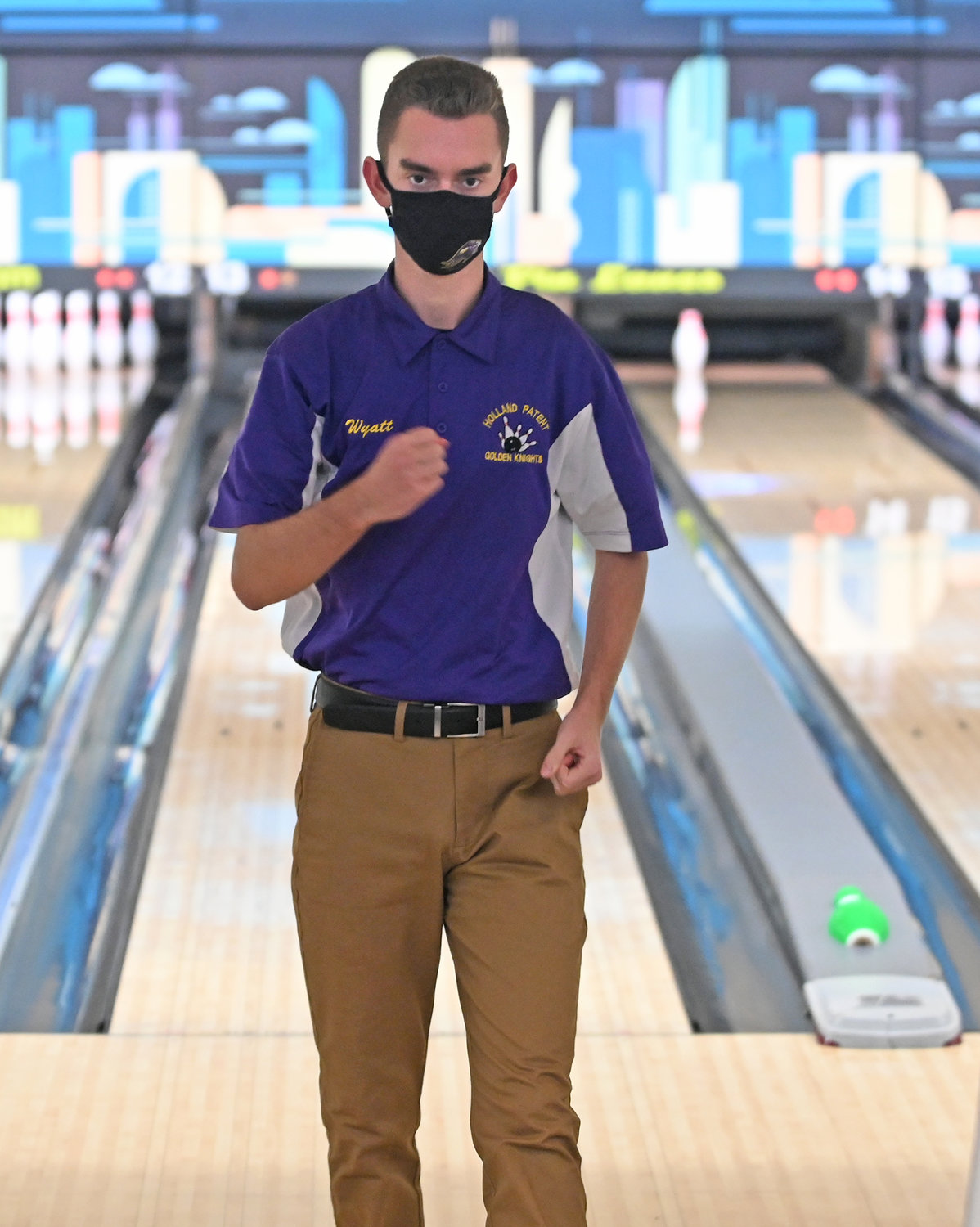 STRIKE — Wyatt Humpf reacts to his strike bowled in the first game, first frame Thursday at King Pin Lanes against Herkimer. The senior at Holland Patent is a co-captain in his fifth year with the team.
(Sentinel photo by John Clifford)
Previous Next
Posted Friday, January 14, 2022 10:00 am
Steve Jones
Sports writer
email / twitter

Wyatt Humpf led the team cheer Thursday when the Holland Patent bowling teams hosted Herkimer at King Pin Lanes then he casually went out and bowled a strike on his first frame of the day. Some things have been a challenge for the student-athlete who was diagnosed with autism in 2007, but being a leader and a helper are right up his alley.

The senior started bowling in fifth grade, having watched his two older brothers — Dalton and Cooper — and other relatives. He started bowling at Adirondack Lanes in Barneveld.

Humpf has spent the last two seasons as the HP football team’s manager but bowling is where he competes. “I liked to pick a sport that’s a better fit for me,” he said, speficially a non-contact sport. He’s been bowling with the varsity team since eighth grade.

“We have a team that we get along, we go together. We think about our strategy,” he said of the Golden Knights’ bowling team. “What makes me good is not hitting the gutters and getting as many strikes as possible.”

Coach Eileen McCann said his strength is in the consistent repetition of his form. But form is not why Humpf is a team captain. “I have nice and perfect leadership. I support and try to help and teach the underclassmen.” Coach McCann added that he’s been a help to the girls team too, as they only have three seniors and not a lot of experience at the varsity level.

He’s also the one who does the little things off the lanes, McCann noted. Humpf is the first one to arrive and last one to leave, even helping to clean up and make sure teammates have rides home. When HP hits the road to compete, he’s the one programming in the address to the competition’s lanes to get the directions for the drive.

“Our team is not too bad,” Humpf said. “We’re getting there.” The team has qualified for Sectionals in each of Humpf’s five years on the team. The team was co-champion of the Center State Conference’s Division I two years ago as well.

COVID-19 has had a few impacts on bowling, including the need to hold some competitions remotely, with each team bowling its home site and comparing scores. “It’s hard because you don’t know if you’re up or not,” Humpf said. Often teams have to wait for the totals to come in before they know how the games are going.

This season has been “ups and downs, getting a little better,” Humpf said of his own game. He’s been hovering around a game average of just under 170 most of the season. The team has four more regular season matches then the league championship Feb. 1 and Section III championship Feb. 6.

“He’s always been a pretty consistent bowler,” said his father, Bob Humpf, who was at King Pin to watch Wyatt compete agaist Herkimer. “The social aspect of it is very big. He loves going to school. I don’t think he’s missed a day of high school.” As for the team, “He loves to help them. He loves to organize.”

Wyatt said he enjoyed his time as football team manager, a role a few friends on the team talked him into taking. “I just like being another helper and leader, part of the community.” A few football players are also his bowling teammates, Christian Ostinette and Dmitry Lukashevich. His father said “the football team really made him a part of the team. He really enjoyed the camaraderie there.”

Another passion of Humpf’s is his work with the Kelberman Center, the Utica agency that provides autism services for children, adults and families in the region. The family has raised funds for the Center with bottle-and-can drives, including over $4,000 in 2020 and again in 2021. They had done bowl-a-thons but with COVID they switched to a different event. Wyatt’s role at the fund-raiser includes DJ, as he makes a playlist to keep the event upbeat.

In addition to music, Humpf loves to play video games: Fortnite, Super Smash Bros. Ultimate, Overwatch, Minecraft, Grand Theft Auto, Rocket League, the list goes on and on. He has played in tournaments at the school and participated in HP’s Esports club.

Humpf is in his senior year at HP but he has his eye on what’s next. He wants to participate in Syracuse University’s InclusiveU program. It’s for “students of all ages with intellectual and developmental disabilities who want to experience college life in a fully inclusive setting to Syracuse University,” according to the school’s website. He said he’d like to study subjects like sports management and music.

“My wife always pushed him and believed in him more than anybody,” said Bob Humpf. He also complimented the school district for its programs and the students there who “are accepting of him.” McCann, he added, “has done a lot for him,” mentoring him for years outside of bowling.