UTICA — With an expectation of being able to admit patients in the third quarter of 2023, work continues on the Mohawk Valley Health System’s Wynn Hospital in the LaFayette Street neighborhood. … 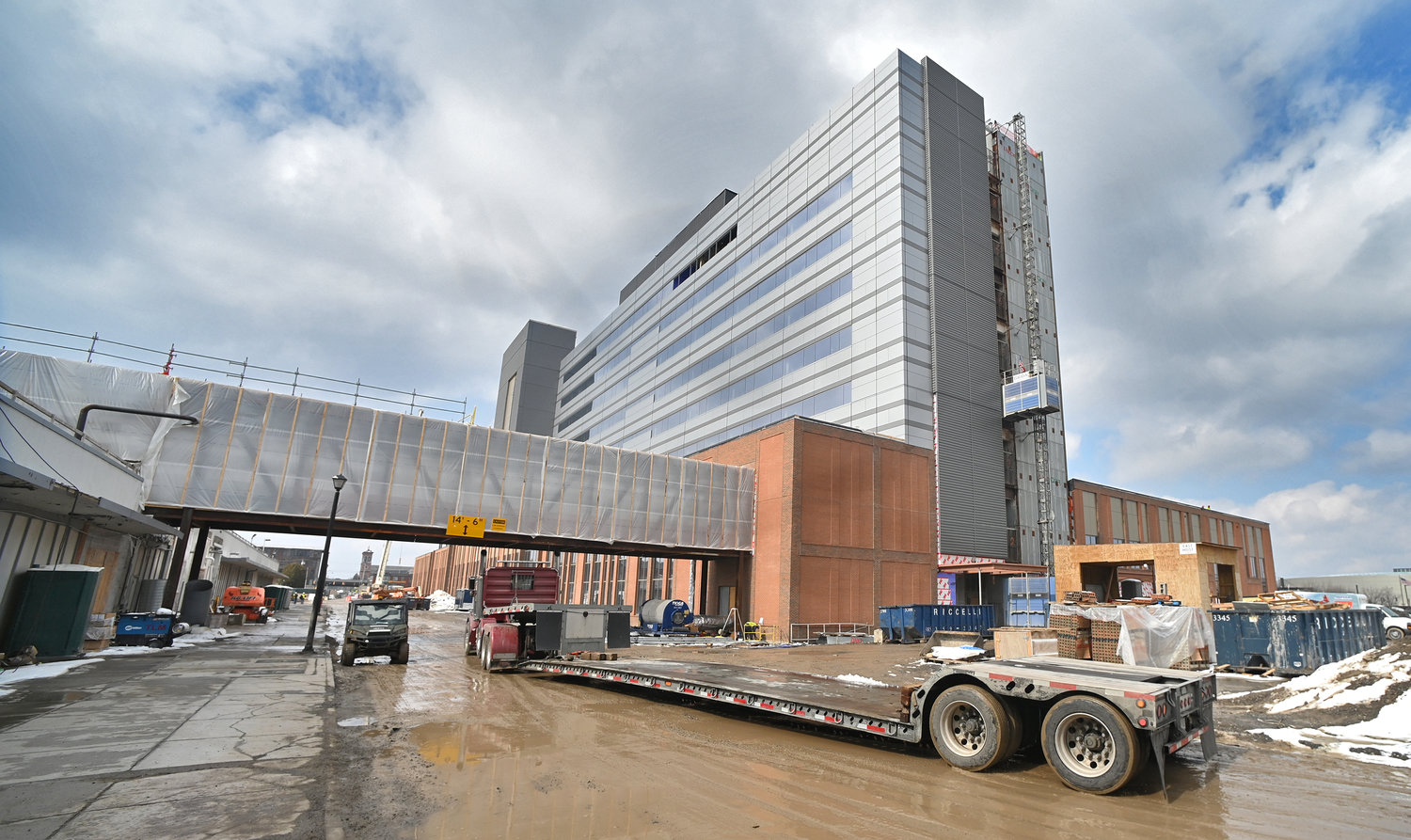 MOVING PARTS — A truck goes under the Columbia Street pedestrian bridge of the Wynn Hospital in Utica on March 10, 2022.
(Sentinel photo by John Clifford) 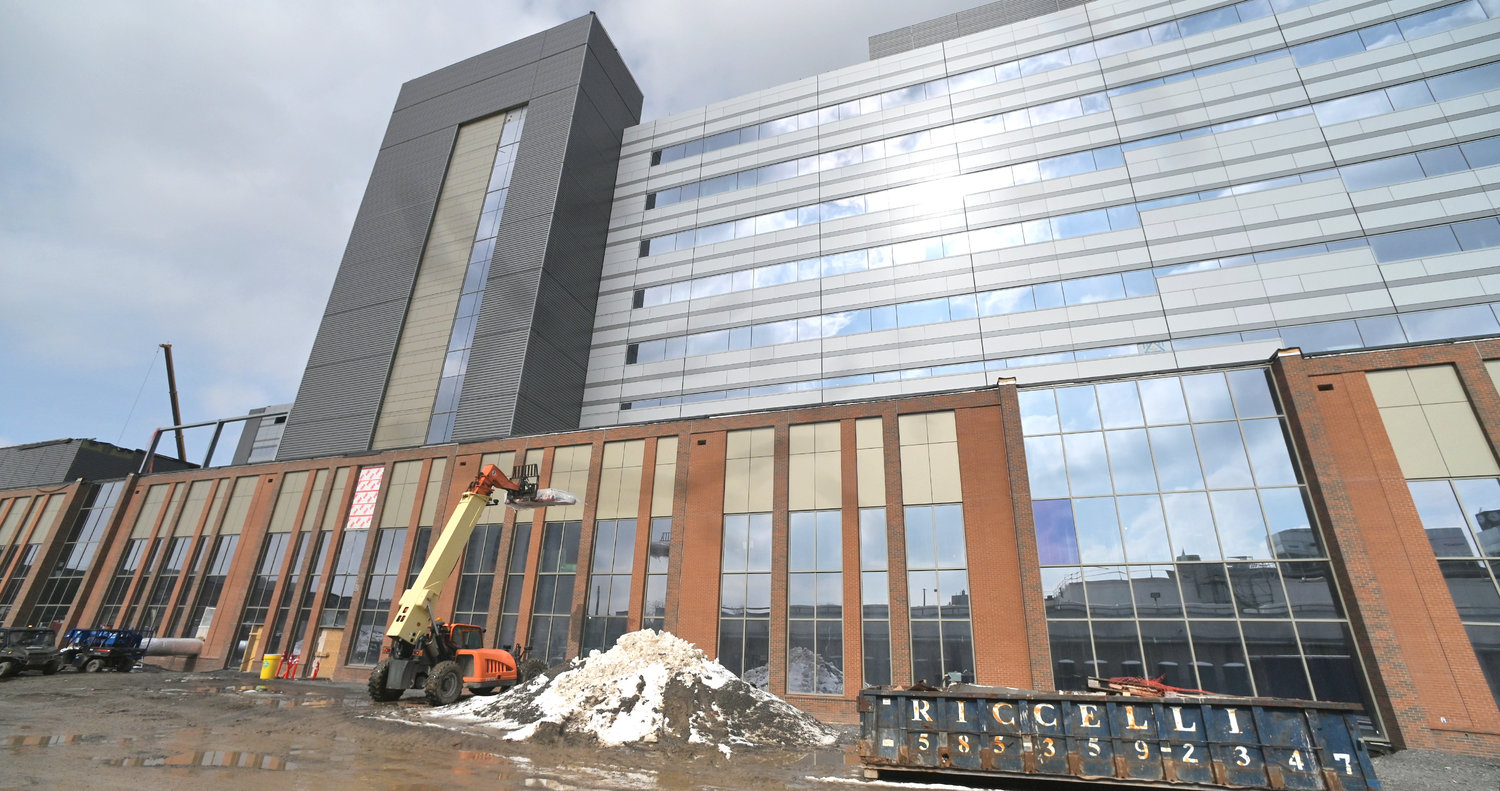 STREET VIEW — The Columbia Street view of Wynn Hospital with sheetrock being lifted up to higher floors on March 10, 2022.
(Sentinel photo by John Clifford) 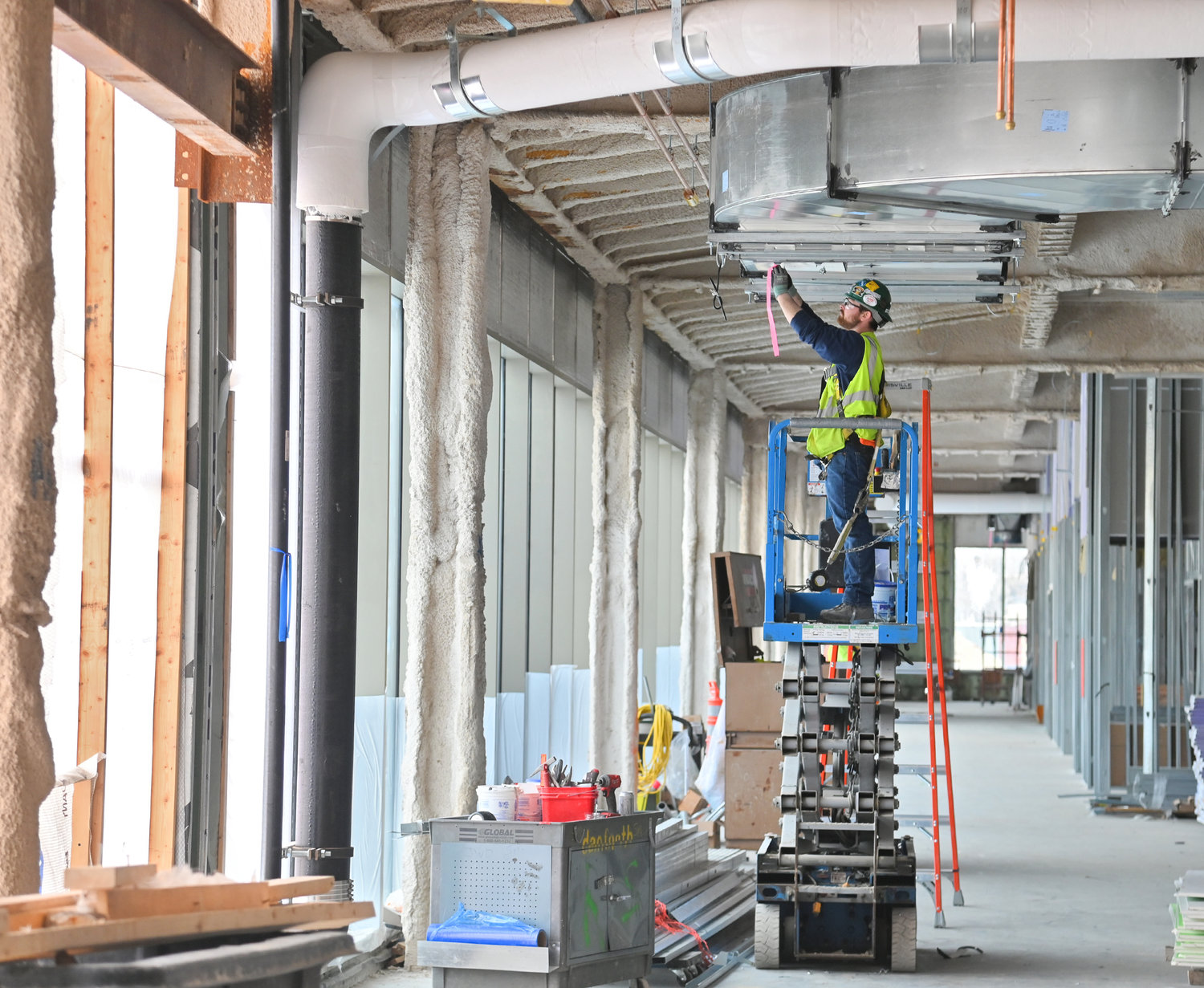 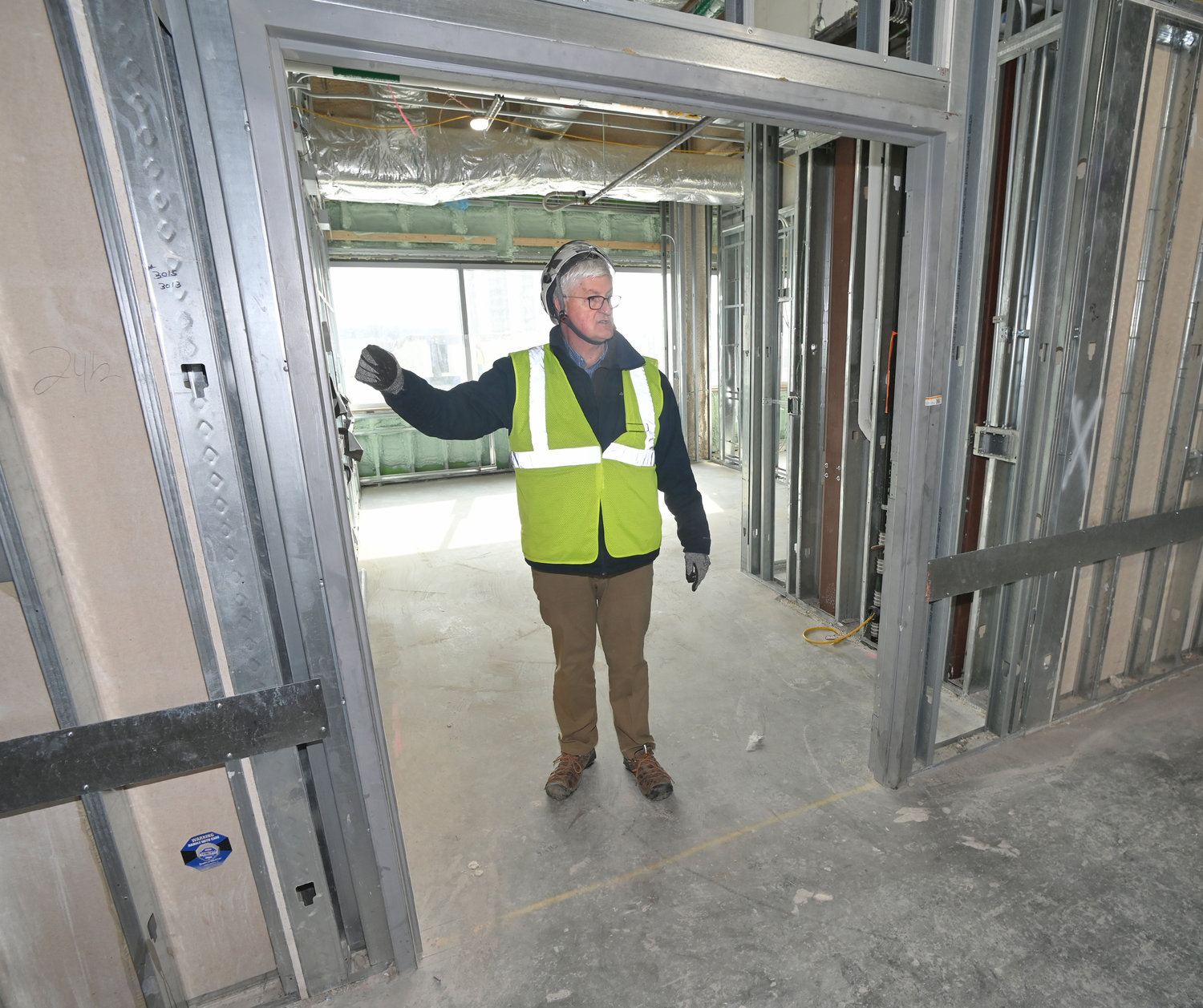 UTICA — With an expectation of being able to admit patients in the third quarter of 2023, work continues on the Mohawk Valley Health System’s Wynn Hospital in the LaFayette Street neighborhood.

Construction on the regional medical center began at the end of 2019, and is expected to wrap up in July 2023.

Now a little more than halfway done, the site is bustling everyday with roughly over 400 construction workers daily, and constant movement of machinery and the sound of power tools keeps the site active.

As he speaks during such a tour, he organically leads his visitors to the heart of the complex — the central utility plant — a place that houses the main utilities that pump life into the 10-story, 672,000-square-foot hospital.

From the plant, miles of heating, ventilation, plumbing and electricity lines stretch out to feed the downtown hospital campus. Scholefield also added that the plant will be the landing site for all supplies being shipped to the hospital once it is up and running.

While still a work in progress, the interior floor plan is now visible and interior spaces can be appreciated.

There are no dark corners at Wynn Hospital. The large amounts of window glass lend to a peaceful, natural light experience that will also allow patients to heal more quickly, Scholefield said.

A circular room on the first floor outlines the hospital sanctuary.

“It’s a place to “Think. Mourn. Worry,” Scholefield said. But, also a place to find solace and overcome struggles no matter what belief system they have. A place to gain hope.

The design of the new hospital is intended to give patients a new and forward thinking experience. The front entry to the hospital will welcome patients to a two-story foyer ready for check in and with security checkpoints.

Since construction began, Scholefield pops into the job site multiple times each week.

“Every day there is something new,” he said while entering a makeshift, temporary construction door. “I make sure that things are turning out as we expected… a lot of times, things don’t always work as we expected.”

As an example, as construction began a decision needed to be made to save on manpower, which led to patient room bathrooms being built offsite by a Florida company and trucked to the site for installation.

During the pandemic, Scholefield said MVHS has already had time to mentally grow and form a kinship with the facility.

As the interior is built in and floor plans come to life, hospital staff has been able to visualize efficiencies in equipment and workstation placement and make plans for future public health crises in terms of what features can be converted or repurposed for additional uses or additional working spaces.

Looking to the future, Scholefield said there is room for the hospital to grow and change even from within, without even having to add square footage.

This planning work has made simple tours of the hospital come alive for medical staff before it’s even finished.

The result is that all patients ( who will all have private rooms) and equipment will be where they should be, — from the placement of patients in operating rooms to supply closets for staff.

Also, each floors’ layout provides for the ability to easily isolate and control the flow of staff and patients if necessary.

As construction has progressed, MVHS has been bringing groups of staff from St. Elizabeth and Faxton-St. Lukes Hospital through the facility to show them where they will be working and get them used to the idea of one day all working under the same roof.

“Many of them have never worked together before,” Scholefield said of the currently split staff.

With the intended full-staff move into Wynn Hospital upon its completion, MVHS’s St. Elizabeth and Faxton-St. Luke’s campuses are for sale hospital officials said in a separate Daily Sentinel interview for an annual regional business publication.

In the latest developments for the project, a 30-year, $30.9 million bond resolution for a downtown hospital parking garage was approved during a Wednesday, March 9 Oneida County Board of Legislature meeting, which paves the way for a parking garage complete with a helipad to be constructed next to the hospital.

The total maximum estimated cost of the project is $50.9 million, with the additional costs not bonded for will be funded by $10 million in grants and $10 million secured through the American Rescue Plan Act of 2021.

County officials said construction on the four-level, 1,350-spot garage is expected to break ground in mid-May and be completed in October of 2023.

There are buildings expected to be torn down in order to make way for the structure, and an eminent domain court hearing is scheduled for the end of March to address related legalities regarding that matter, Scholefield said.

Bids on the parking garage project are expected to be opened in mid-April, county legislators said at the Wednesday meeting.

The intent is to have the garage completed by the time the hospital is ready to receive patients.

“The first day we have patients here, our own nurses will have a place to park,” Scholefield pointed out.

Scholefield said that in addition to building a hospital during the pandemic, the project has seen well-publicized roadblocks from community groups who were vocal in their opposition that the downtown neighborhood is the best spot for the third replacement hospital to be built in New York State in the last 30 years.

Reasons for the opposition ranged from whether a new hospital was even necessary, its location to public infrastructure and whether there were any health and safety implications for the site, neighborhood aesthetics, and the displacement of existing property owners through an eminent domain legal process. All of which have been brought out in court proceedings the past few years.

In a recent legal proceeding relating to the parking garage, Oneida County Executive Anthony J. Picente Jr. announced one of the lawsuits brought against the county by petitioners within the footprint of the future public parking garage for the Wynn Hospital was dismissed by the New York State Supreme Court Appellate Division, Fourth Department.

In a December 23, 2021 decision, the Fourth Judicial Department of the Appellate Division dismissed the claims by the petitioners in the suit — Brett Truett, Joseph Cerini and 418 Lafayette Street Corporation — that the county failed to comply with the requirements of SEQRA in condemning their properties by eminent domain.

The court further determined that Oneida County had the requisite authority to condemn the petitioners’ properties through eminent domain, that the acquisition of the properties will serve a public use and that the proceeding was constitutionally sound.

In addressing another point of skepticism, Scholefield said in order to make sure the hospital fit in with the character of its neighborhood, designers chose brick colors that are a nod to more aged structures in the nearby; while other parts of the hospital are more metallic and modern in nature, and are a nod to other development projects such as silicon carbide fabrication facility Wolfspeed in Marcy which has been under construction roughly along the same time frame as the hospital.

Scholefield said that early on there were manpower concerns relating to the two projects rising from the ground at the same time.

But, it worked out, and soon, and in the not too distant future, the region will benefit from both projects coming online.

From one spot in the new hospital, the views stretch to the hills of Marcy and Wolfspeed is in sight.

-The Mohawk Valley Health System expects to employ 3,000 to 3,500 healthcare professionals at the hospital when it is completed.

-MVHS was awarded a $300 million grant from New York State in 2017 to create an integrated healthcare delivery system in Oneida County and broke ground on the downtown Utica site in December 2019.