It’s 7 a.m., and Keith Gurgui makes sure he’s awake so his home health aide can help bathe and clothe him, and then lift him out of bed and into his wheelchair before they have to leave for the … 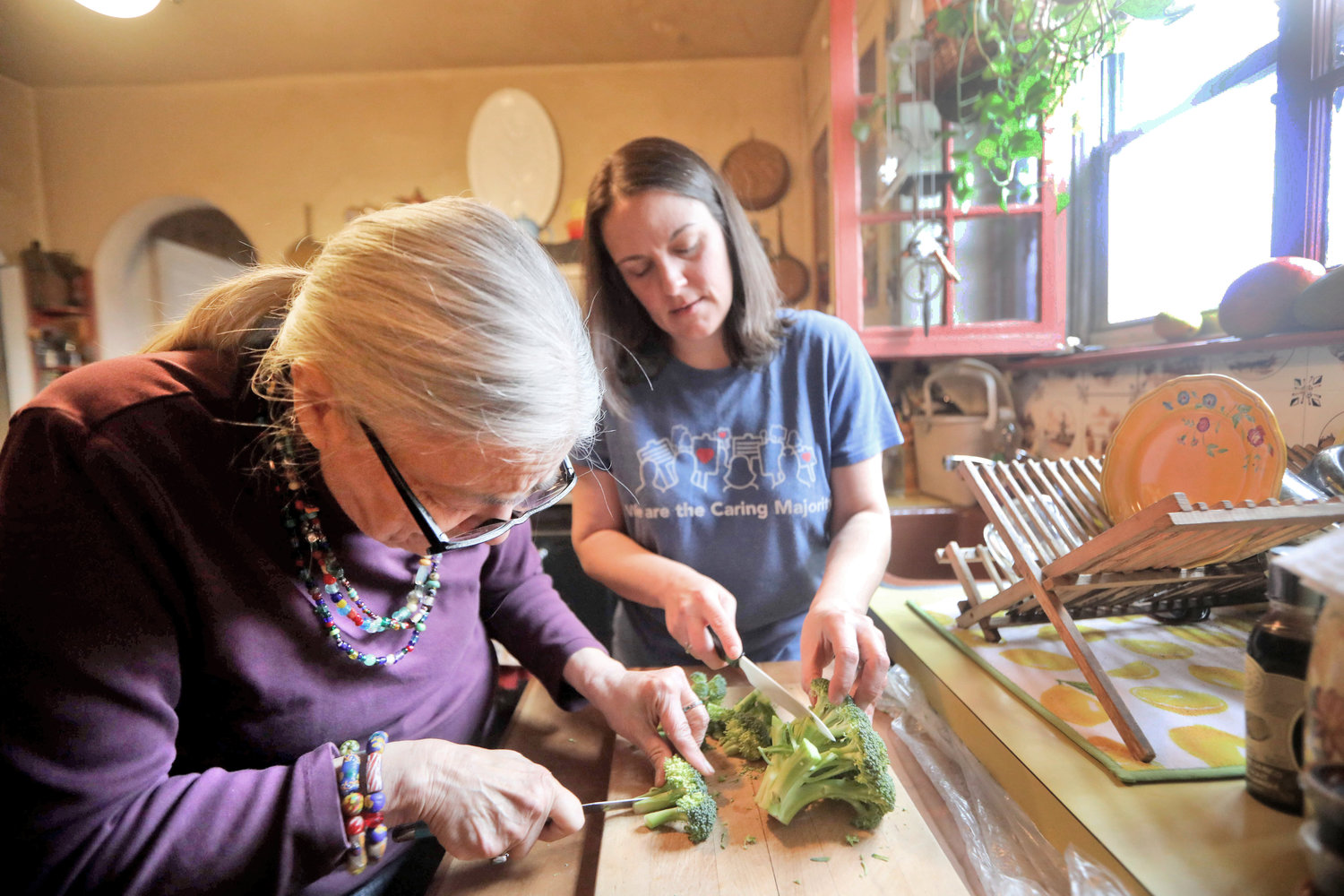 Maggie Ornstein, 44, prepares lunch with her mother Janet, 77, in their Queens home March 24 2022. Janet suffered a cerebral aneurysm in 1996 when Maggie was 17 years old and suffered cognitive impairment. As a result, she has required constant caregiving ever since. .
(AP photo) 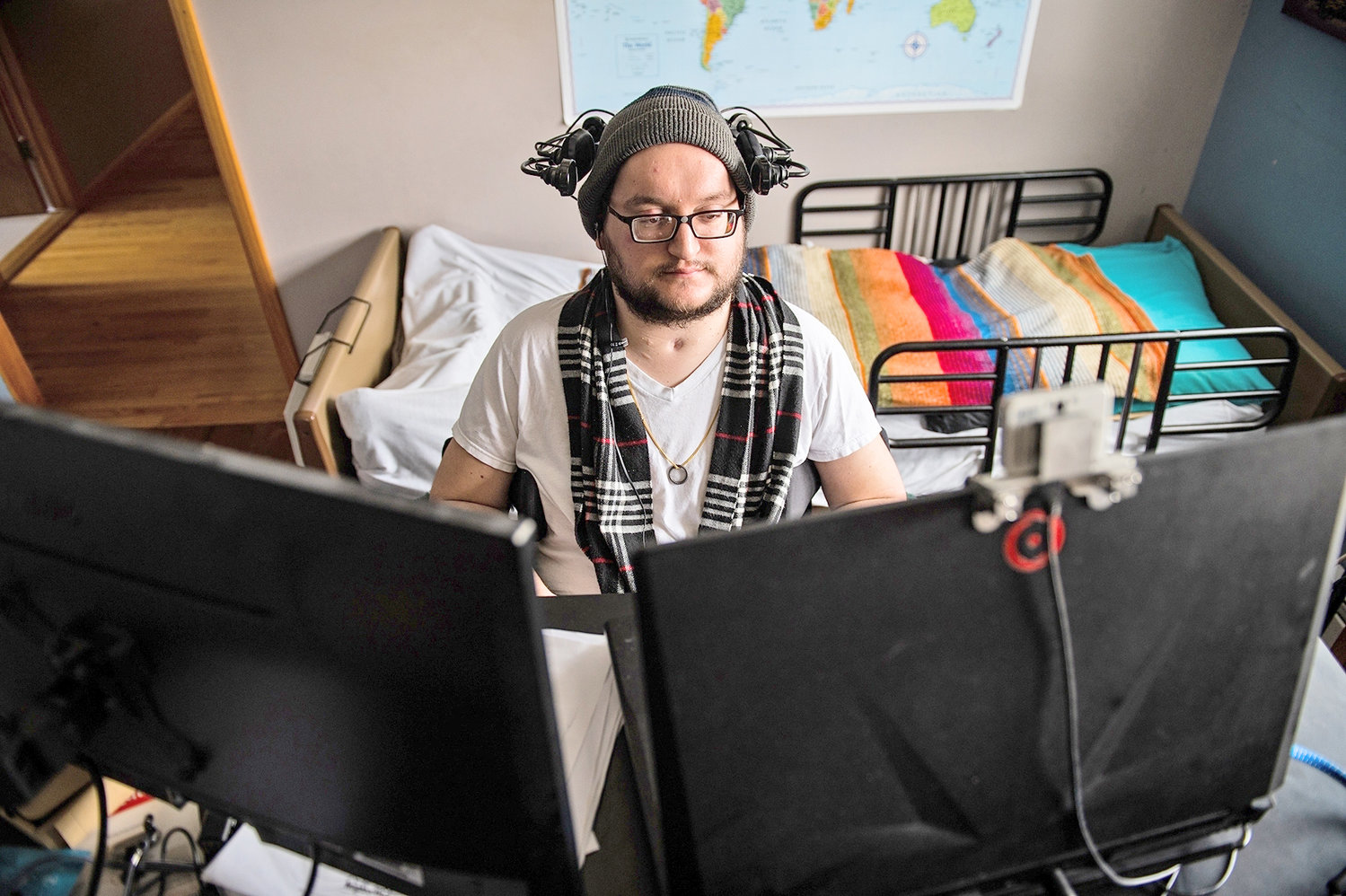 Keith Gurgui works on his computer using a camera mouse at his home in Lake Katrine recently. Keith had an accident in 2009 that left him paralyzed from the shoulders down; he’s advocating for better wages for home caregivers.
(AP photo)
Previous Next
Posted Thursday, June 9, 2022 7:27 pm
Sarah Taddeo, USA TODAY Network - New York State Team

It’s 7 a.m., and Keith Gurgui makes sure he’s awake so his home health aide can help bathe and clothe him, and then lift him out of bed and into his wheelchair before they have to leave for the day.

A diving accident in 2009 left Gurgui, 30, paralyzed from the shoulders down. He needs 24/7 assistance, but he’ll spend the next 12 hours without an aide, because he can’t find anyone to fill the shift. This is a regular occurrence for Gurgui, as aides quit, call out sick or, as happened recently, are barred from working overtime by their agencies.

Right now, he’s got about 20 open hours of care a week. He’s hoping to find another aide to cover those soon.

“There’s no pool of people to pull from now,” said Gurgui, who lives with his parents in his family home in Lake Katrine, outside of Kingston. In recent years, Linda and Richard Gurgui, both nurses, either retired or went down to part-time work so they could help care for their son.

The situation is mirrored in countless families around New York and the nation as home care workers, who are often paid less than fast food workers and receive fewer benefits, leave the field because they can’t pay their bills. Some residents with disabilities sleep in their wheelchairs at night instead of being transferred to a bed, because they’re unsure if they’ll have an aide to get them up in the morning.

Meanwhile, spouses, parents or other family members are compelled to sacrifice college, child-rearing, careers, dreams and free time as they ensure their elderly or disabled loved ones receive high-quality care.

“Because there’s a shortage of home care workers and the ones who are around are underpaid, you have this drag on society where informal caregivers are retiring, or aren’t working,” said Keith Gurgui. “They’re tied down because the system isn’t keeping up.”

COVID-19 exacerbated these circumstances as societal shutdowns, quarantine periods and fear of illness kept many aides away from work. Institutional environments like group homes and nursing homes also saw a decline in direct professionals.

“The staff is crying because they know that the residents are not getting the quality care that they deserve. It breaks your heart,” said Julie Martinez, a licensed practical nurse at Dunkirk Rehabilitation and Nursing Center.

Nationally, the home care industry will need an additional 450,000 home health care aides by 2025 to keep up with the demand for services, as millions of Baby Boomers advance into their 70s and may require more assistance at home.

But the workforce trend is going in the opposite direction, said Rachel McCullough, political director at Jews for Racial & Economic Justice and co-director of the Caring Majority, a coalition that advocates for seniors, family and paid caregivers and people with disabilities.

New York has the one of the worst projected shortages of the home health aides in the nation, followed closely by other mid-Atlantic and Midwest states like Michigan, Ohio and Pennsylvania. In New York, 74% of seniors and people with disabilities were unable to retain home care staff in 2021, according to a report by the Consumer Directed Personal Assistance Association of New York.

The crisis has led to a broad, high-profile push to increase wages for home care workers in New York, and, in the process, elevate the visibility of an industry that allows millions of people to avoid nursing homes and age with dignity.

The home care sector is facing a more acute version of the worker shortage most industries experienced after the pandemic’s peak.

More than 45% of direct care workers, which includes home health aides, personal care aides and nursing assistants, live in or near poverty due to wages, according to a 2020 report from PHI, a direct care research group. About half rely on public assistance and lack affordable housing.

“In most regions of the state, you can make more going to work at McDonald’s or Amazon than you can caring for someone,” McCullough said.

New York advocates touted what they saw as a legislative solution to this problem — the Fair Pay for Home Care Act, which would ensure that every home care workers are paid 150% of the minimum wage in their area.

Advocates argued that the proposal, which could be jump-started through American Rescue Plan funding, would have ultimately paid for itself by getting home care workers off public assistance and into higher paying jobs, creating further economic growth.

Gov. Kathy Hochul didn’t include the legislation in her proposed budget in January and advocates pushed hard for it to be included in full in the state’s finalized budget, rallying in Albany multiple times a week and unfolding a 60-foot long wait list symbolizing the number of individuals waiting to get home care.

The state’s final budget, approved in early April, included $7 billion for a statewide raise for home care workers, amounting to about a $3-per-hour raise per worker. But advocates say that’s not enough to turn the tide on the workforce issues the industry faces.

“As New York’s population ages and home care workers continue to flee the sector, we are clear that a significant pay increase — 150% of minimum wage — is the only solution to stem the home care shortage,” McCullough said in a statement as the budget was being finalized in early April.

The pay gap between home care and other industries is evident daily for Lolli Edinger, 51, who wouldn’t be able to make ends meet for her family on her yearly salary.

“If I was trying to live on this, I would have to go get another job,” she said – and she works 50 hours a week as it is, caring for two different individuals in the Hudson Valley.

Edinger’s husband supports their main household expenses and provides family health insurance with his full-time job, which is how she’s able to live out her passion for helping people remain in familiar home settings, despite their age, illness or disability.

One of her clients is a man in his 30s who is quadriplegic; the other is a friend’s mom who’s in her 80s and suffers from Parkinson’s disease and dementia. In each case, Edinger helps them get outside on walks; drives them to work, doctor’s appointments or advocacy events and generally keeps them company through her shifts.

Her work is key to allowing her male client to experience many facets of life and community, she said.

“I’m working with a man who’s in the prime of his life who wants to be out and about, and not stuck in a nursing home,” she said.

But meanwhile, he has been unable to find other home care workers to cover many of his shifts during the week, putting stress on Edinger and other aides as they work harder to ensure he has what he needs. Even so, there are times when he’s home alone, with only family members to check on him, she said.

“We haven’t been able to hire anyone … some people that would call up and be interested and find out the rate of pay, they get mad at him,” Edinger said.

This situation is what leaves many family members with the unenviable decision to either shoulder the caregiving duties for a loved one themselves, or find a suitable nursing home or other caring facility.

“Sometimes I’m tired enough that I think I can’t do this anymore,” said Karen Eichelberger, 65, a Chautauqua County resident and the primary caregiver for her husband, who suffers from Lewy Body dementia, which affects a person’s thinking, memory and movement.

He qualified for 80 hours of care a week through Medicaid, but Eichelberger can only find aides to cover about a quarter of that right now.

Recently, Eichelberger’s husband went to the hospital, and because of her struggles to find help at home, he’ll have to go to a rehab facility for an unknown amount of time following his hospital stay, she said.

In recent months, she has resorted to putting ads for help on Facebook and Next Door, a neighborhood website, and even offering to pay $1 per hour more than what the state currently offers home care workers, paid out of her personal income, in order to attract aides, she said.

Maggie Ornstein’s mom, Janet, gets about 40 hours of care per week from a home care worker in their Queens home. But “I’m embarrassed that it’s still not enough,” Ornstein said, adding that it’s tough to watch workers care for her mother when she knows they’re getting paid such low wages.

Janet had a brain aneurysm 26 years ago, leaving her in a coma for five months. She spent subsequent years in hospitals and nursing homes before coming home, where she needs regular care from Ornstein or an aide because of her traumatic brain injury.

Ornstein was 17 at the time, and now, at 44, she has since set aside the prospect of having children or a full-time job. She is a part-time college professor, and spends the rest of her time caring for Janet and advocating in the home care policy space in New York and beyond. Her paychecks go entirely to health insurance payments.

Caring for ill or aging family members takes a heavy emotional and financial toll on the caregiver, even when home care workers are available, Ornstein said.

But raising the appeal of the home care field by increasing wages and benefits will send a message that New York supports both home care workers and family caregivers, and that home care is a viable option for aging New Yorkers or those with disabilities.

“You can’t expect people to treat the job like a priority when we don’t prioritize them,” Ornstein said.