Holtz, Bahl back to New Jersey after three-game stint with Comets

Alex Holtz and Kevin Bahl seemed like their time with the Utica Comets wouldn’t last long. The parent New Jersey Devils sent the prospects to Utica to get some games in as the NHL team racked up an …

Holtz, Bahl back to New Jersey after three-game stint with Comets 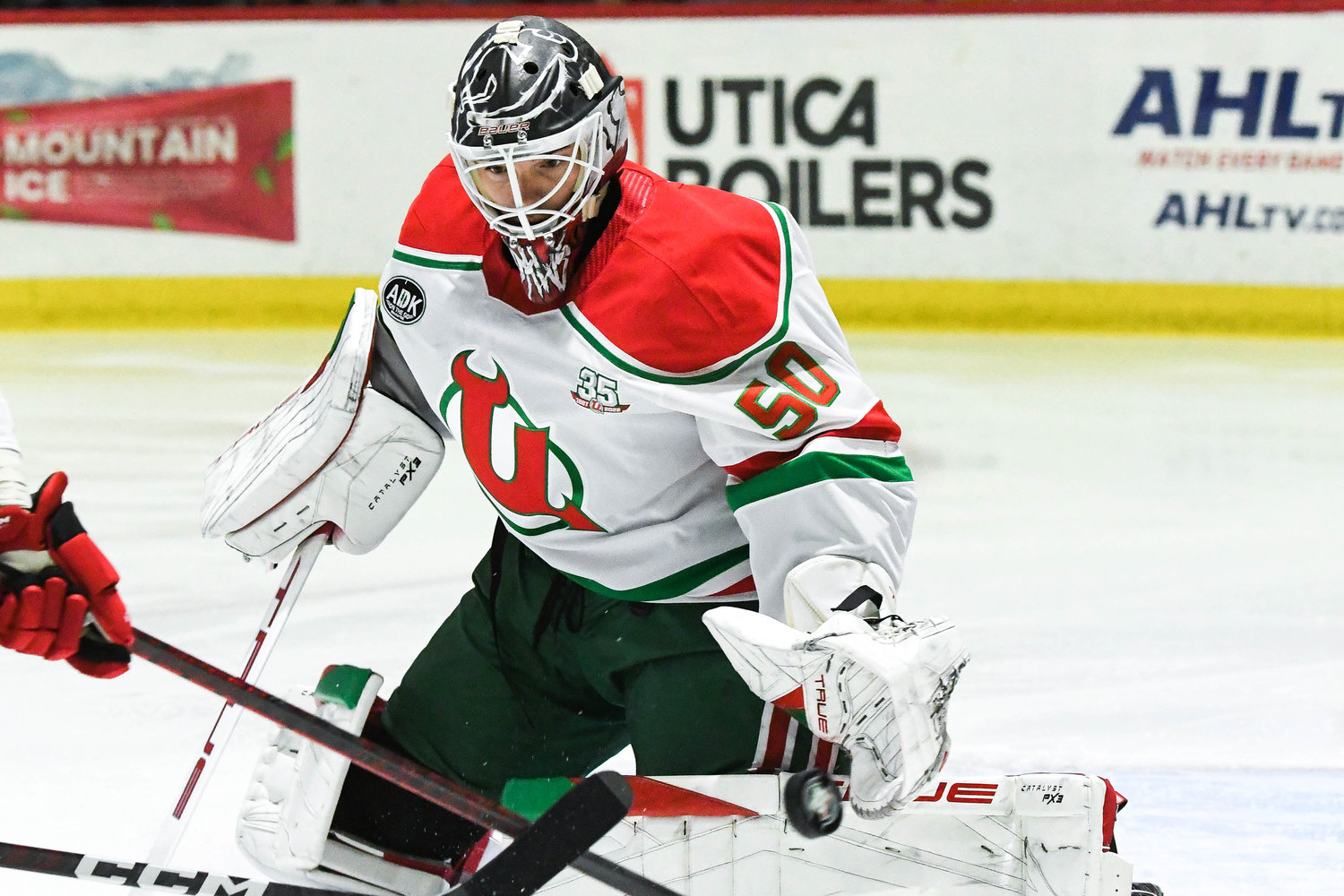 Alex Holtz and Kevin Bahl seemed like their time with the Utica Comets wouldn’t last long.

The parent New Jersey Devils sent the prospects to Utica to get some games in as the NHL team racked up an impressive extended win streak early this season.

However, with the NHL club a few players below the maximum 23-man roster, the likelihood of the skilled forward and the tall defenseman staying with Utica for an extended period of time appeared low.

After playing three games — including helping Utica earn three out of a possible four points against host Charlotte last weekend — the Devils officially announced Monday that Holtz and Bahl were back with the NHL team. Tyler Wotherspoon, who had joined New Jersey last week, is back with Utica.

Holtz showed off his skill while also working on other parts of his game. He finished with two goals and an assist in three games. In 55 career games with Utica, he has 55 points (28 goals, 27 assists).

The Devils also announced Monday that goalie Nico Daws was recalled. Amanda Stein, the Devils’ team reporter, tweeted Daws was insurance with Akira Schmid — up in the backup role to Vitek Vanecek — out with an illness ahead of New Jersey’s game Monday night against the New York Rangers.

The possibility remained that Utica could be without another forward after New Jersey lost forward Nate Bastian to an apparent shoulder injury suffered in Saturday’s win over Washington. Devils coach Lindy Ruff said Monday morning that Bastian will be “out for a bit.”

As of Monday afternoon, Utica had 15 forwards on the roster, though Mason Geertsen has to serve the last game of his six-game suspension Wednesday. And, Aarne Talvitie has missed the last four games due to an undisclosed injury.

It is unclear how long Daws’ stint with New Jersey might be. Notably, he was recalled Nov. 12 to backup after Vanecek was given a game off. He was returned to Utica the next day.

After Monday’s game, New Jersey’s next contest is Thursday in Newark, so it is possible Daws returns to Utica’s for Wednesday’s 7 p.m. home game against Laval.

Otherwise, the only other goaltender on Utica’s roster is Isaac Poulter, who earned his first American Hockey League win in Saturday’s 3-2 victory over Charlotte.

Mareks Mitens, who is also signed to an AHL deal, is not an option for Utica. He’s been out with a lower-body injury since early November and his timeline for a possible return is unclear. Mitens appeared in one game with ECHL Adirondack on Oct. 22.

Comets General Manager Dan MacKinnon said via text Monday that Mitens has been in New Jersey getting treatment for his injury.

The Comets have their first extended point-streak of the season after claiming three of four points against Charlotte.

Poulter finished with 32 stops for his first professional win. After allowing a goal quickly into the game, he made several timely stops to help Utica rally.

Nolan Foote and Graeme Clarke scored goals to give Utica a lead before Charlotte forced OT with an early goal in the third.

Utica is 2-0-1-0 in the last three games. It is the first time this season Utica has at least a point in multiple games. The win pushed Utica to 6-6-2-1 overall. The team’s 15 points are tied with Laval, which has played five more games.

• The team’s tying goal Friday was changed from Ryan Schmelzer to Holtz.

• Utica went 0-for-4 on the power play Saturday, snapping a three-game streak with at least one on the advantage. Utica’s PP (21.2%) moved to 15th in the AHL.