The Holland Patent football team’s upset run through the Section III Class C playoffs ended Sunday with a 41-0 loss to General Brown in the title game. 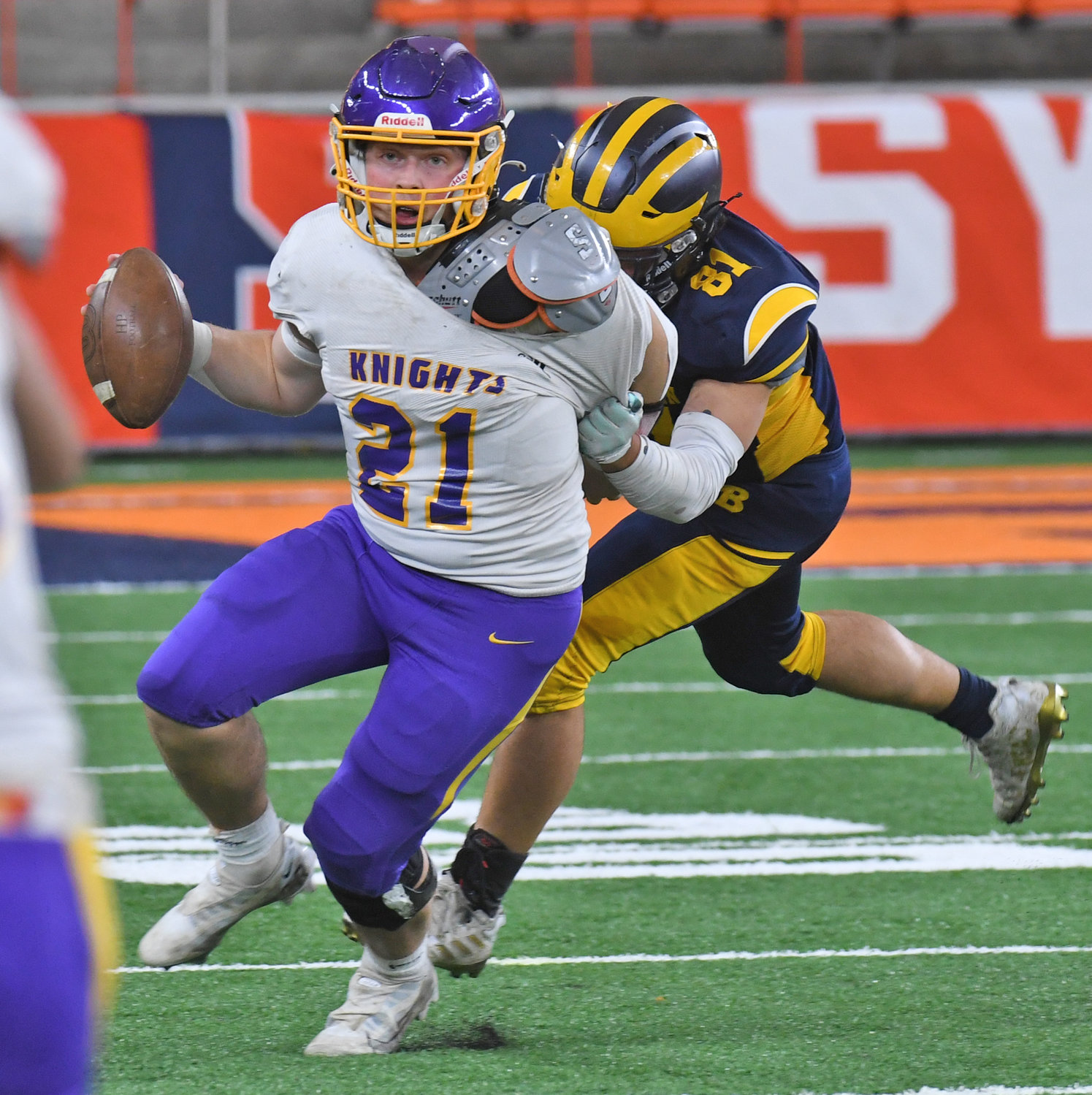 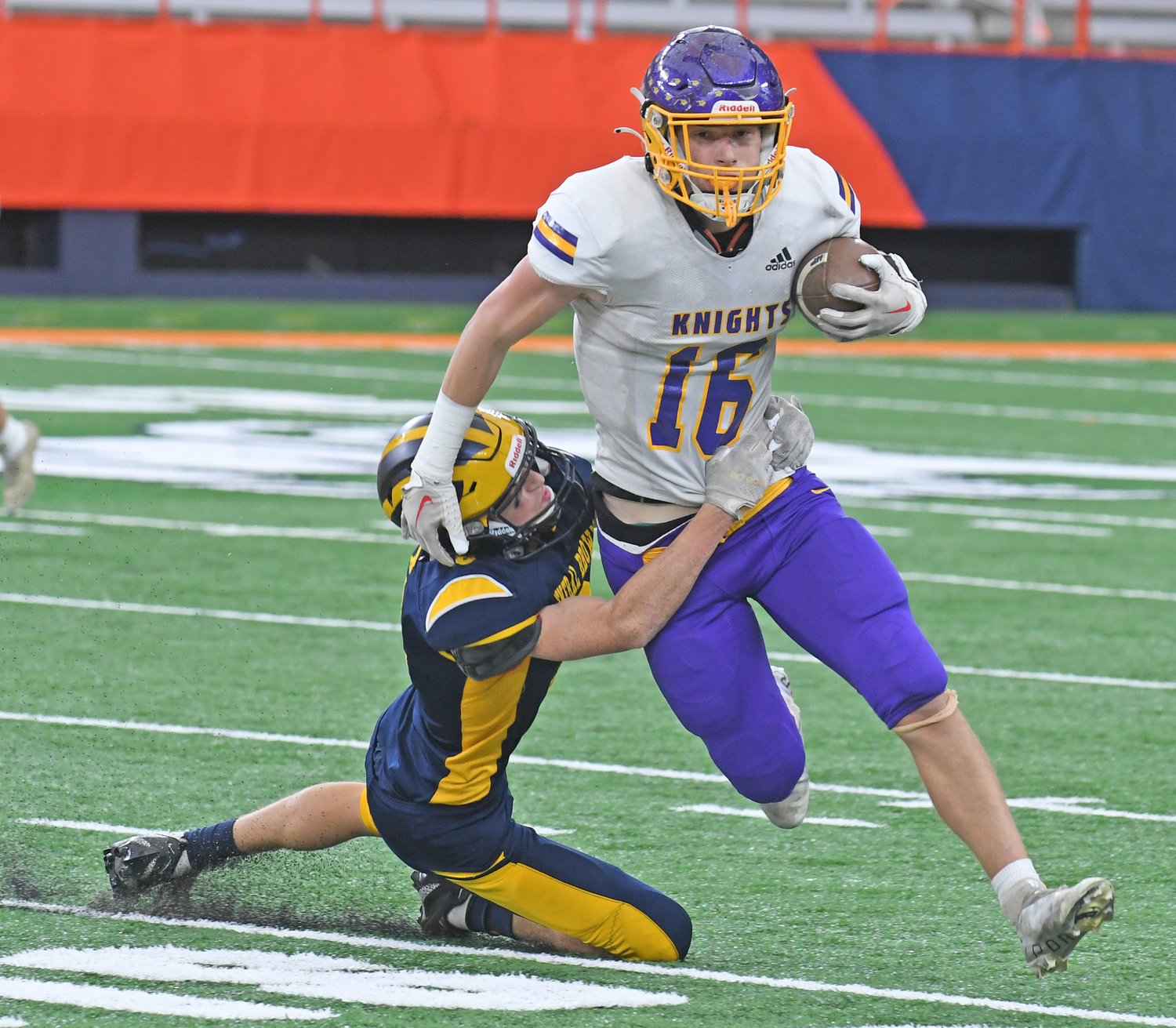 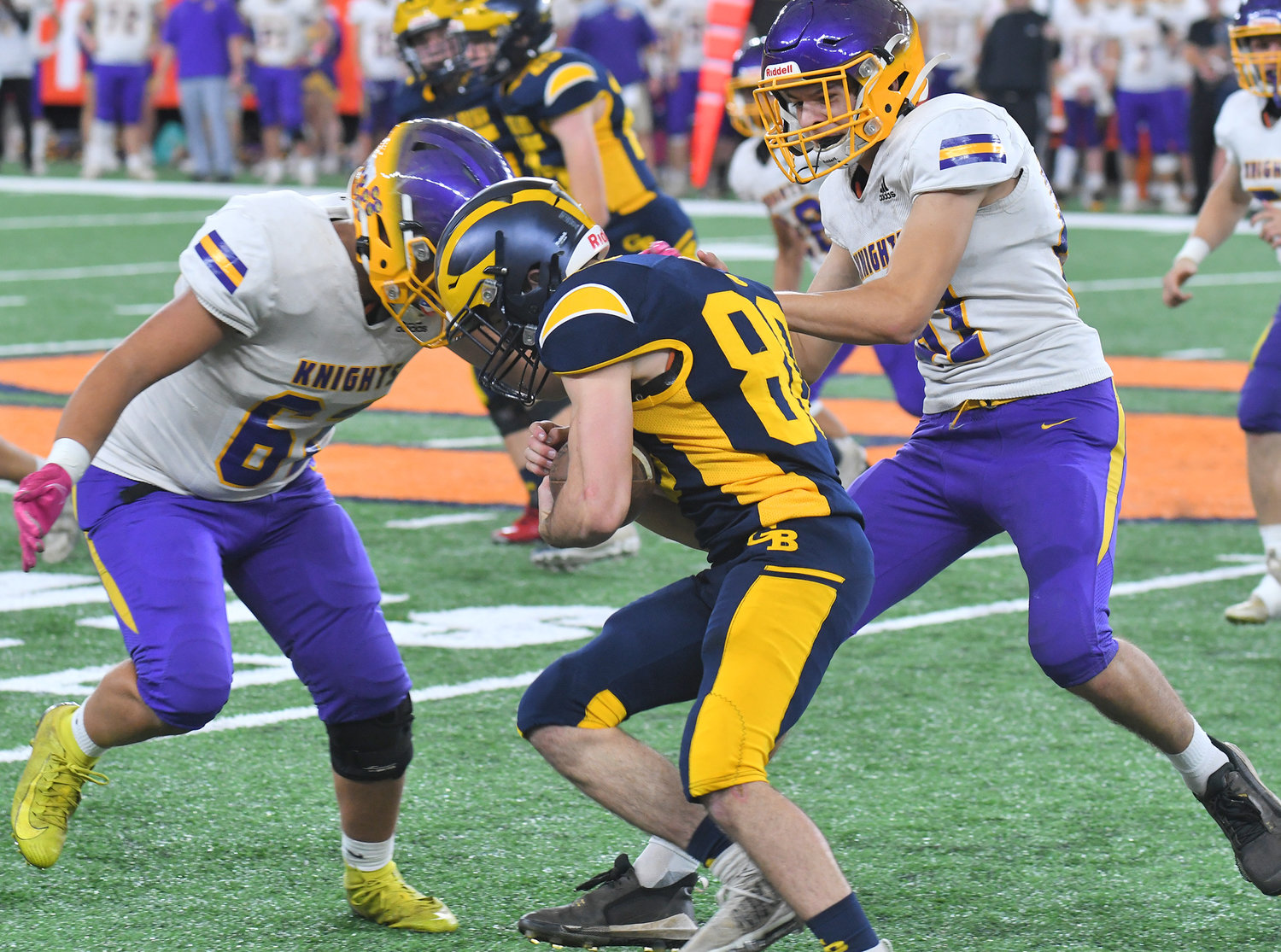 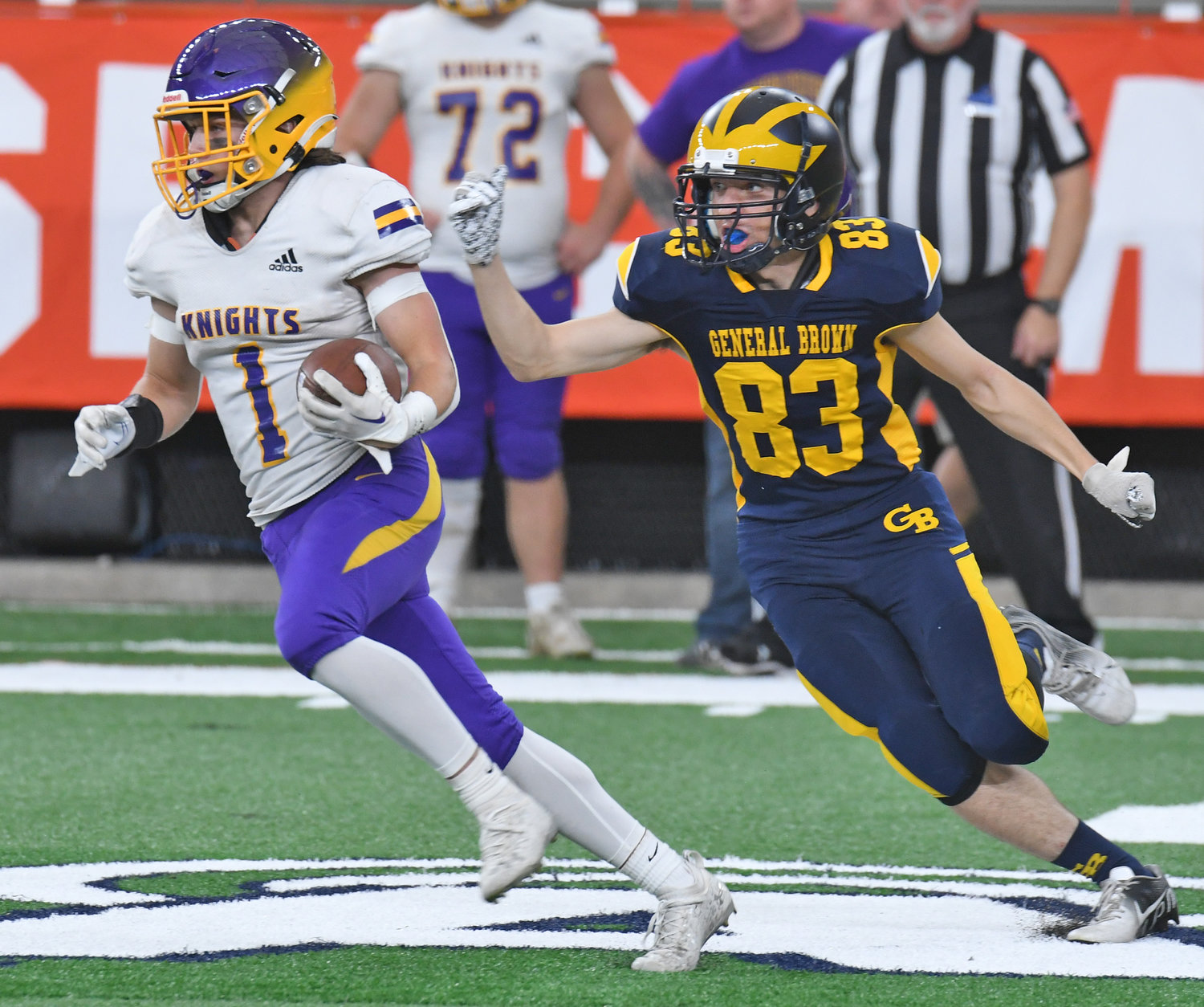 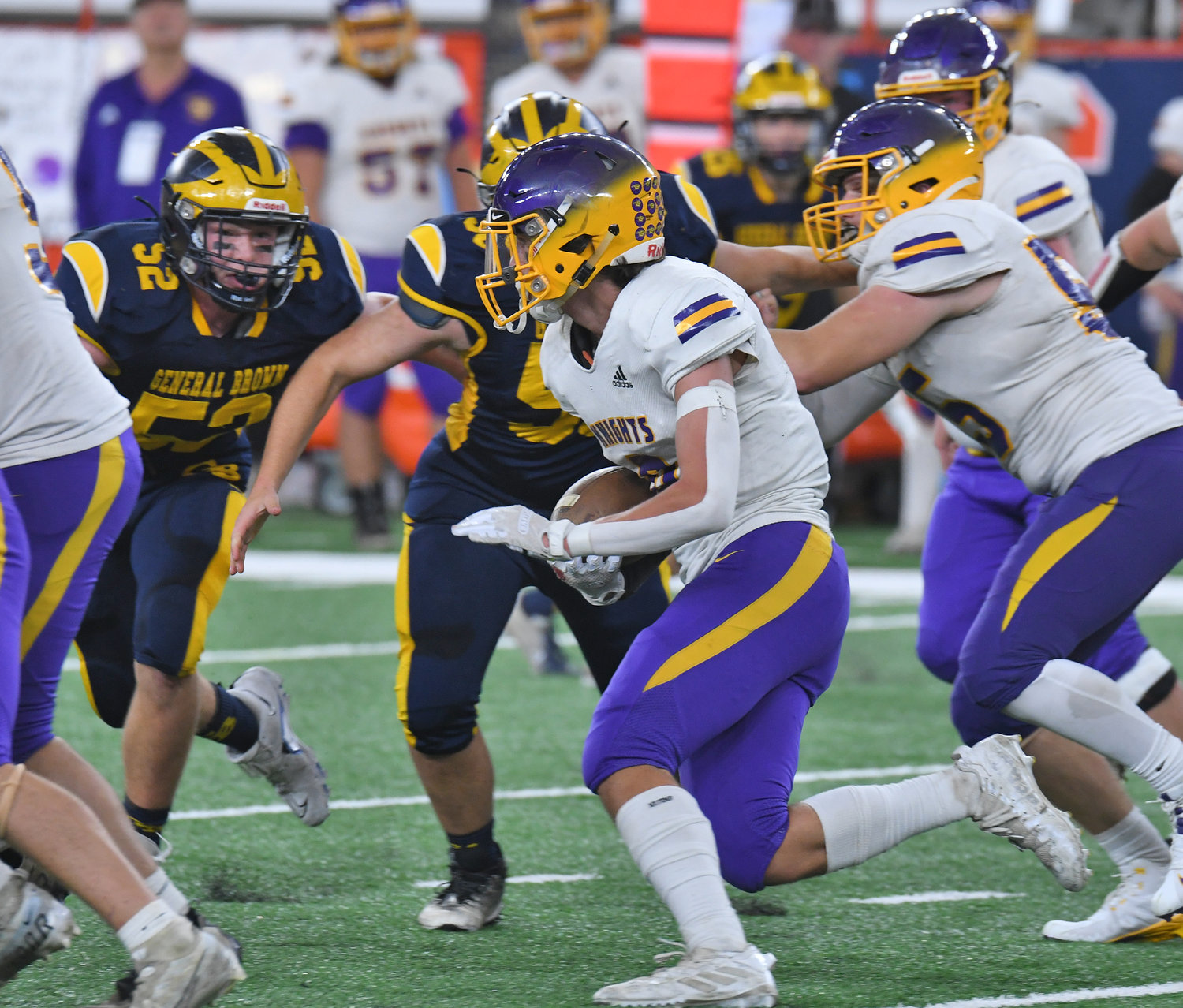 The Golden Knights came in as the five seed and managed upset wins of fourth-seeded Bishop Ludden 18-14 in the quarterfinals and top seed Adirondack 25-20 in the semifinals. That came to an end against second-seeded General Brown at the JMA Wireless Dome.

Holland Patent almost took the opening kickoff all the way back but return man Alex Hoole was tackled by last man for the Lions. Instead General Brown held on defense and then started its offensive dominance.

“They clicked right off the get go,” said HP head coach Brian Briggs of the General Brown offense. HP moved linemen into different gaps to try to stop the opponent that won the teams’ regular season game 48-6. “We thought we could stop them but we thought wrong.” He continued, “Their line was very aggressive. When the ball was snapped they got to where they needed to be right away.”

The Lions scored four rushing touchdowns in the first half to lead 28-0 at the break. First it was Kaleb Natali from 65 yards out. Tayvon Hunt ran in from the three later in the first quarter. In the second quarter, Luke Heller had touchdown runs of one and two yards.

Gabe Malcolm scored the two TDs for General Brown in the second half. He caught a 13-yard TD pass from Aiden McManaman in third quarter then ran one in for a score from seven yards out early in the fourth quarter.

Leading the way for the General Brown defense was Malcolm with 11 tackles, Hayden Moody with 10 and Brock McManaman and Armondo Orcesi with nine each.

HP quarterback Jonathon Zylynski was 10-of-14 passing for 59 yards and an interception. Aiden Rubas was 4-for-6 for 46 yards.

Jordan Koenig led the team with 10 carries and 49 yards rushing. Jordan Carhart had 30 yards receiving to lead the team.

Briggs said the General Brown defense swarmed to the ball all game. “All 11 of their guys get to the ball. They get after it. If one guy was blocked, 10 other guys were there.” His one regret? “I wish maybe we threw the ball earlier but we thought we could run the ball.”

“I’m proud of the team,” Briggs said of the season. The Knights battled through injuries, including a revolving door of quarterbacks. Koenig played all season with injuries as well, he noted. He said he was especially proud of the team’s two playoff upsets. “They had a lot of heart and gave it their all.”

With big turnout at the modified and junior varsity level this season and a number of impact players coming back next season, “I think the future is bright,” Briggs said.

The team will graduate 19 seniors but had 25 non-seniors on the roster as well. Hoole, Rubas, Nick Acevedo, Trenton Stockhauser and Nathan Craver are among the non-senior starters who are expected back.

General Brown improves to 9-1 and will take on Section IV champion Waverly at noon on Saturday, Nov. 19 at Cicero-North Syracuse High School in the state regional round.