The Holland Patent football team will need a third straight upset to sweep through the Section III Class C playoffs and win a title Sunday. 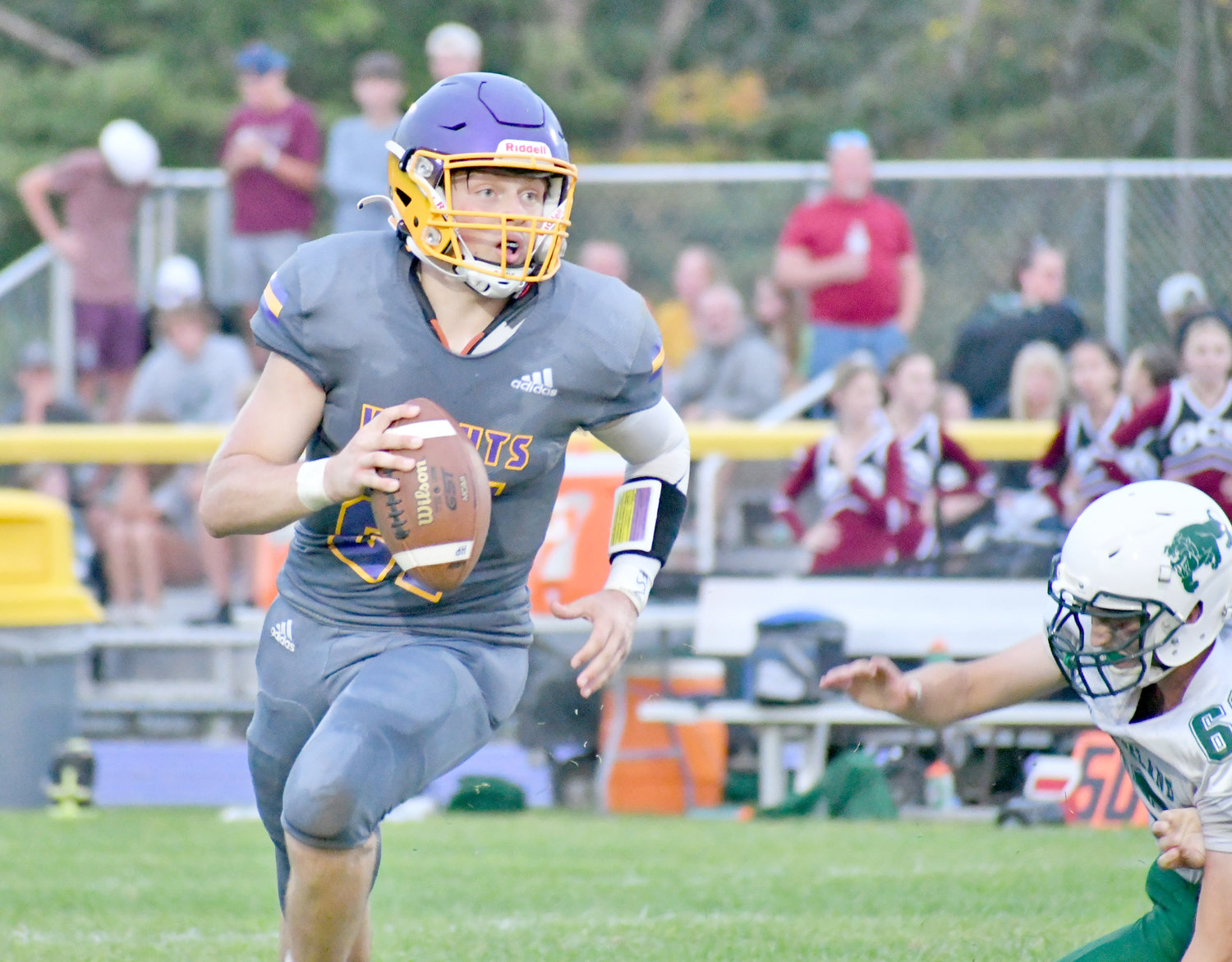 Holland Patent quarterback Jonathon Zylynski rolls out and looks for an open target against Westmoreland-Oriskany earlier this season. Zylynski, who missed several games with a knee injury was back last week to help the team to a 25-20 upset win over top seed Adirondack in the Section III Class C playoffs. He’ll be at quarterback again Sunday as the Golden Knights take on General Brown for the Section III title.
(Photo courtesy of Hannah KB Photography)
Posted Saturday, November 12, 2022 9:00 am
Steve Jones
Sports writer
email / twitter

The Holland Patent football team will need a third straight upset to sweep through the Section III Class C playoffs and win a title Sunday.

The Golden Knights, the five seed in Class C, first beat fourth seed Bishop Ludden 18-14. Then the team went to a neutral site to beat top-seeded Adirondack 25-20 two weeks after losing to the Wildcats 46-0 at home.

Now HP faces General Brown, the two seed, at noon Sunday in the JMA Wireless Dome in Syracuse in the title game.

The Knights will need another dramatic reversal of the regular season game just like it had against Adirondack, as the Lions beat HP 48-6 on Oct. 14 at home. General Brown had five rushing touchdowns and put up 444 yards on the ground. The Lions has a lot of success with a toss play with two pulling linemen that overwhelmed the HP defensive ends and outside linebackers, said HP head coach Brian Briggs.

“They have a balanced attack. It’s not just one player,” Briggs said. The team has two good running backs to lead the “ground and pound game. We just have to stop it.”

“The bottom line is, we’re not going to change much. We have to be error free and play solid football. Try to reduce turnovers and capture turnovers,” said Briggs. The team must reduce penalties and not “shoot ourselves in the foot.”

The Golden Knights’ postseason success has helped, the coach noted.

“Beating Bishop Ludden, a very good football team, then coming back and beating Adirondack, it gives us confidence,” Briggs said. “Us coaches believe our game plan so we just have to get the kids believing.”

This week has been a big one for the team, Briggs said. “We have a whole lot of excitement in town.” There was a public pep rally in town this week in aniticipation of the second trip to the Dome in just a few years. “Of course it means a lot for the school and community.” But, “we have to put that aside and make it business and usual.”

The team is healthy, Briggs noted. “Everybody is back.” Junior defensive lineman Anthony Amidon is back. And while quarterback Aiden Rubas is back the team will go with Jonathon Zylynski there after his success last week against Adirondack, Briggs noted.

The winner of the Section III title game will take on the champion of Section IV at noon on Saturday, Nov. 19, at Cicero-North Syracuse high school in the regional round of the state playoffs.