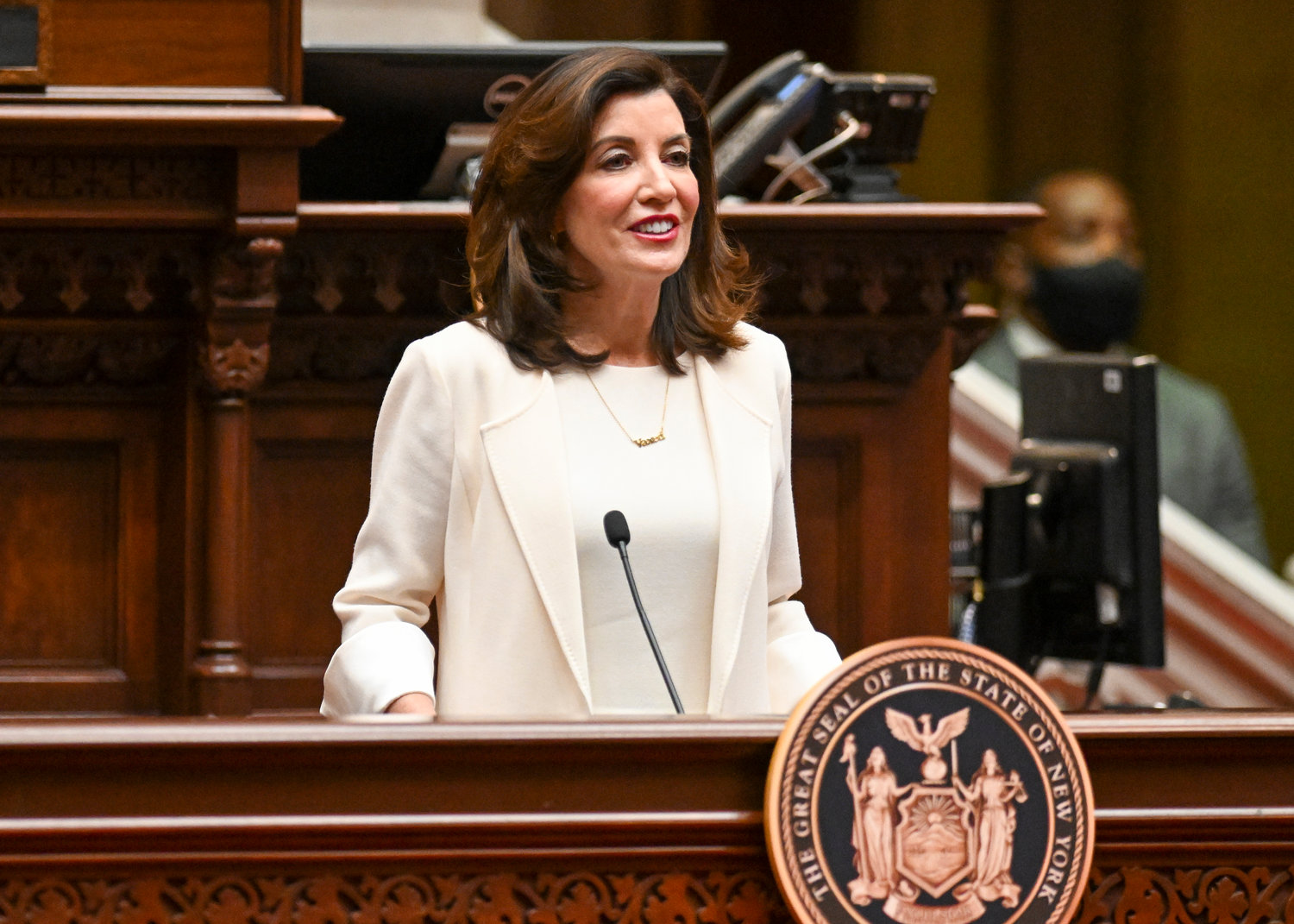 READY FOR THE RACE — New York Gov. Kathy Hochul delivers her first State of the State address in the Assembly Chamber at the state Capitol, on Wednesday, Jan. 5, 2022, in Albany. According to reports, Hochul leads the field of gubernatorial hopefuls with nearly $22 million raised so far for her campaign.(AP photo)
(AP Photo)
Posted Wednesday, January 19, 2022 7:59 pm
Marina Villeneuve, Associated Press

ALBANY  — Gov. Kathy Hochul has raised nearly $22 million for her election campaign, a huge sum that gives her a dominating advantage over a narrowing field of opponents in the Democratic primary.

Hochul’s haul, raised in just five months, dwarfed her closest competitors among both Democrats and Republicans, according to campaign finance filings by several candidates Tuesday.

Hochul has nabbed both donations and endorsements from many of the state’s most influential unions, lawmakers and advocacy groups.

Her strong showing early in the race has already forced out potential competitors for the nomination. Attorney General Letitia James withdrew from the race and former New York City Mayor Bill de Blasio announced this week that he wouldn’t run.

Still, Suozzi has vowed to mount a serious challenge to Hochul.

He has criticized Hochul on law and order issues, saying he wants to undo parts of a sweeping bail reform law that made it easier for nonviolent criminal defendants to remain free while awaiting trial.

He has also called for an attorney general investigation into Hochul’s use of state aircraft to attend political fundraisers.

In terms of total cash on hand, Hochul’s closest rival is former Gov. Andrew Cuomo, who reported $16 million in campaign funds as of mid-January.

Cuomo long planned to run for re-election, but resigned in August amid sexual harassment allegations and a looming impeachment trial.

The former governor has denied that he ever assaulted anyone or intended to offend anyone. He’s also said he doesn’t remember touching the stomach of a female trooper on his security detail.

And last February, Cuomo said he was “truly sorry” for behavior that was “misinterpreted as an unwanted flirtation.”

It is unclear whether he might someday attempt a comeback. Cuomo hasn’t outright said he isn’t running for governor in 2022. His attorney, Rita Glavin, has been evasive when asked by reporters about Cuomo’s political ambitions.

In the meantime, Cuomo has kept some staff on his campaign payroll to wage a fight for his reputation. He’s used his lawyer Glavin to hold regular Zoom calls attacking the integrity of accusers and investigators.

The Albany district attorney announced this month that he would not prosecute Cuomo over a woman’s allegation that he groped her breast. An Albany judge then dismissed that charge.

Cuomo’s spokesperson Rich Azzopardi said Cuomo could seek reimbursement for his legal fees because of that dismissal. Azzopardi said he didn’t know if Cuomo would do so.

Cuomo could still face civil lawsuits from some of the women who have accused him of sexual harassment. Cuomo’s spokesperson Rich Azzopardi has said Cuomo won’t “pay one penny in attempts at civil extortion.”

Still, Cuomo faces a tight deadline if he does choose to run this year, and would likely have to do it without help from the Democratic Party establishment. Polling done last fall indicated that his support among potential voters plummeted after the harassment allegations, although he has retained some support among Democrats.

Cuomo could also use his campaign funding to boost other candidates. Azzopardi said Wednesday he didn’t have details about any potential use of Cuomo’s campaign cash.