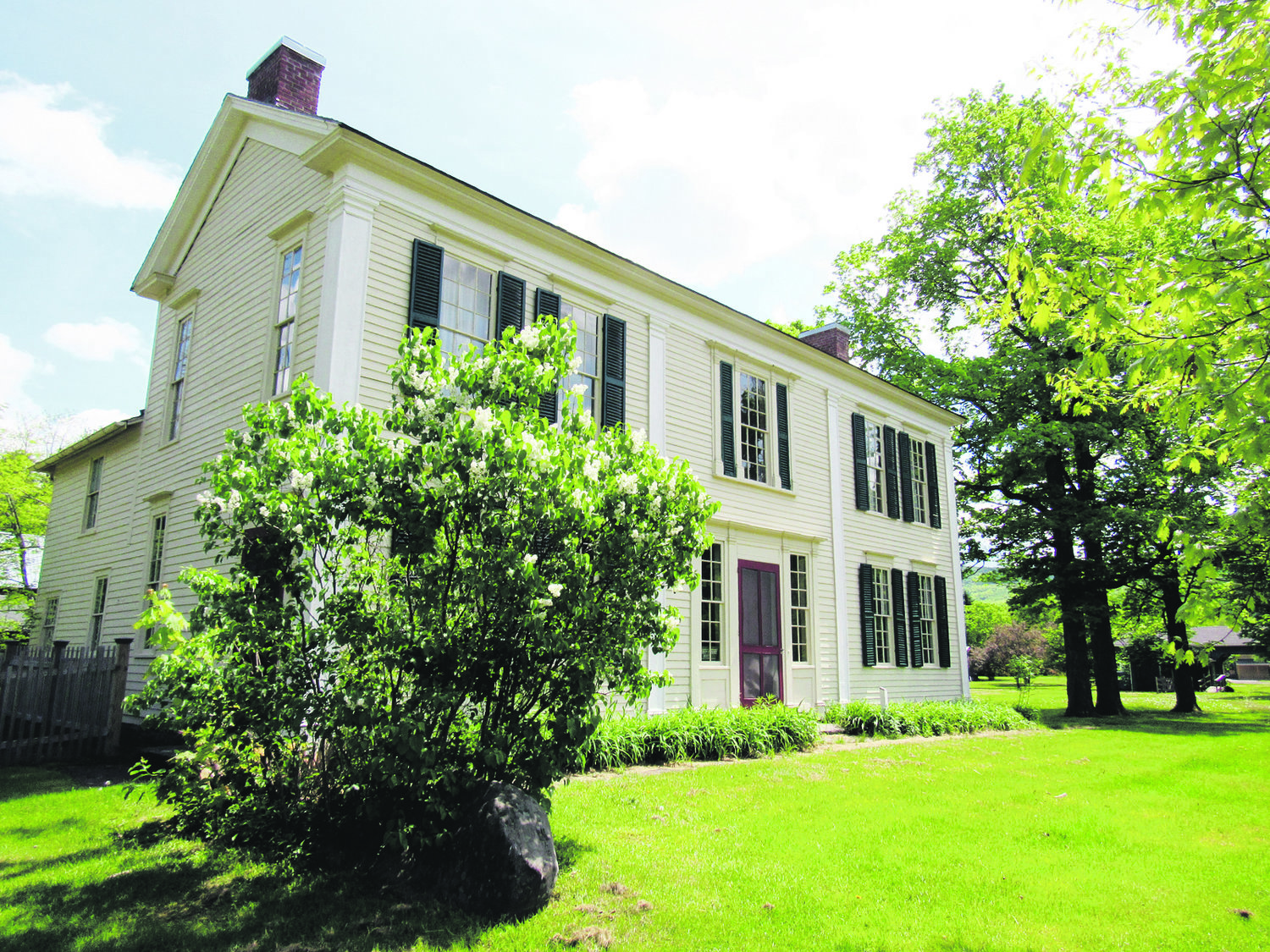 The Gideon Frisbee House, as shown Wednesday, May 25, on the grounds of the Delaware County Historical Association was the birthplace of Delaware County.
(Photo (Oneonta) Daily Star/Vicky Klukkert) 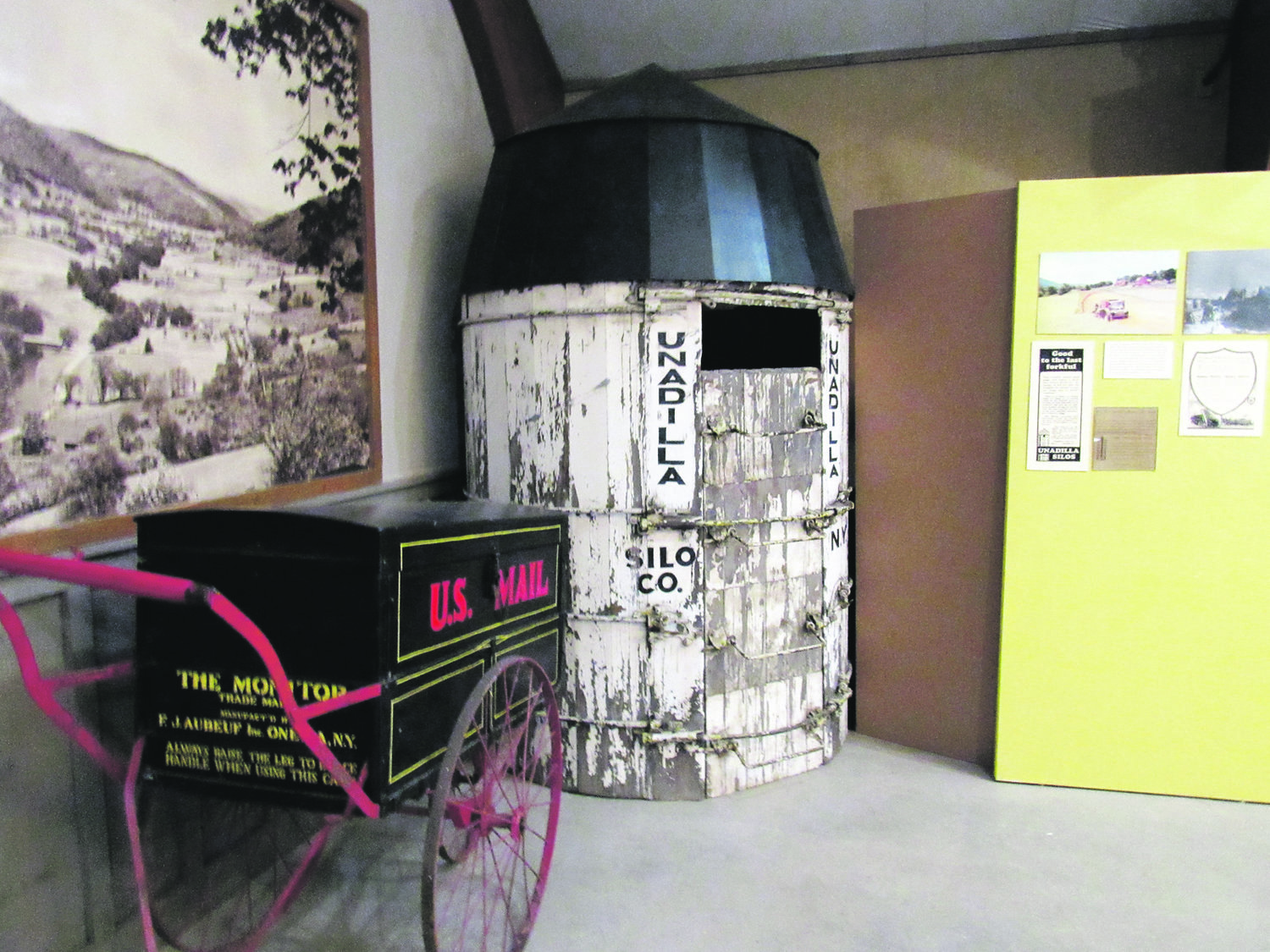 Part of the farm exhibit inside the main gallery at the Delaware County Historical Association in Delhi is shown May 25.
(Photo (Oneonta) Daily Star/Vicky Klukkert)
Previous Next
Posted Wednesday, June 1, 2022 8:30 pm
Vicky Klukkert via Associated Press

Gaffney was moving portraits, linens, rugs and other items from storage at the main office to the 1797 Gideon Frisbee House on the property. The association doesn’t heat the historic house in the winter, so items are stored at the main office DCHA Archivist Ray LaFever said.

“It’s the birthplace of Delaware County,” Duerden said. “The first supervisors meeting was held in the tavern.”

Gaffney said the house was expanded through the years and each room depicts a different era from 1800 through the 1920s. “It’s nice to see the house set up again,” she said.

In addition to the Gideon Frisbee House, the grounds include six other historic buildings — the Frisbee barn includes a farming exhibit, there is a tollgate from Stamford, a gun shop from Hamden, a one-room school from South Kortright and a corn crib and blacksmith shop from Andes. Also on the grounds is the Frisbee family cemetery, a nature trail along Elk Creek that ends at the Heart of the Catskills Humane Society, and the main gallery building that houses special exhibits, the research library, gift shop and about 10,000 artifacts, Gaffney said.

This summer’s special exhibit is about cooking through the years, and there are several old utensils, egg beaters, butter churns, crocks, tea kettles, meat grinders and more displayed. In the main gallery, there is an exhibit about the history of the county and the history of farming in the county.

The museum opened for the season on Saturday with a talk about slavery by Diane Galusha.

“I have been interested in the topic of slavery in Delaware County since I came across references to it while researching Middletown in the Civil War several years ago,” Galusha said. “The fact that here in rural Delaware County, far from any plantation, human beings were bought, sold and traded like cattle or furniture is an uncomfortable truth that should be included alongside the tales of brave emigrants clearing homesteads and creating communities. Though their numbers were small, enslaved people played an important role in the county’s development. We owe them a debt, and a collective apology.”

She said the federal and state census from 1790 to 1820 listed slaves by number in a column. “Many people will be surprised to know there were at least 133 enslaved individuals in 89 households during that period,” she said. Slavery was banned in New York in 1827.

Duerden said he was happy to bring back programs to the museum after a two-year hiatus due to the COVID-19 pandemic. In addition to Saturday’s talk, the Civil War Reenactment will take place June 25 and 26, and the Enchanted Evening at the Gideon Frisbee House will return July 23. There will be a presentation about Italian Immigrants in Upstate New York, 1875-1925 on Aug. 27 and the Delaware County Town and Country Quilters will have their Quilts Along the Delaware, which was postponed last year, on Sept. 10 and 11.

Galusha’s talk is free and open to the public. Admission to the grounds is a suggested $5 for adults and $1.50 for children. Tours are available upon request. The grounds are open from 11 a.m. to 4 p.m. Tuesday through Saturday. For more information, visit www.dcha-ny.org.