A Virtual Quantum Collider 2.0 event, featuring various panels, discussions and networking sessions on accelerating quantum research and technology, will be Dec. 1 and 2, announced the Innovare … 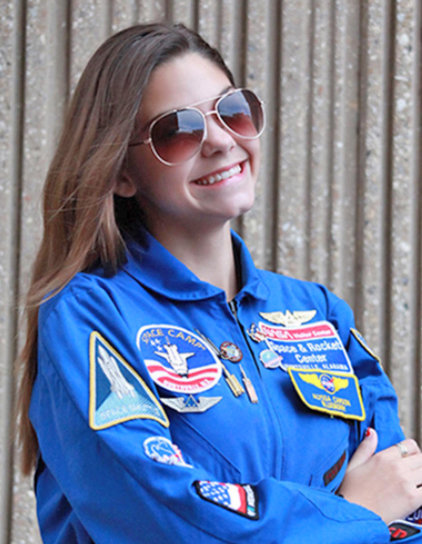 STEM’S NEXT GENERATION — Nineteen-year-old Alyssa Carson, astronaut in training, global TEDx speaker and future Mars walker, will be the keynote speaker at the Virtual Quantum Collider 2.0 held in Rome Dec. 1-2. She and her father, Bert Carson, will discuss how to cultivate the next generation of visionaries and inspire young people to careers in science, technology, engineering and math.
(Photo submitted)
Posted Wednesday, November 25, 2020 4:00 pm

A Virtual Quantum Collider 2.0 event, featuring various panels, discussions and networking sessions on accelerating quantum research and technology, will be Dec. 1 and 2, announced the Innovare Advancement Center at Griffiss park.

Officials at Rome Lab, formally called the Air Force Research Laboratory Information Directorate, will be among government and private-sector speakers from around the country, according to usafquantumcollider.com online.

For more information about registration for the event, visit usafquantumcollider.com.

“This two-day, collaborative event will continue the momentum of the first-ever Virtual Quantum Collider and will build purposeful partnerships among government, industry, academia, and the small business community, furthering the development of a robust quantum ecosystem,” said the Innovare announcement; Innovare involves a partnership between Rome Lab, the state, Oneida County, City of Rome, the Griffiss Institute, NYSTEC, and SUNY. “This follow-on event will feature live, interactive Supply Chain and Workforce Development panels, presentations by industry-revered speakers, and virtual networking opportunities” among the activities.

Quantum technology is considered an emerging field of physics and engineering, which relies on principles of quantum physics. Among potential impacts for Air Force capabilities cited by Rome Lab officials are GPS-like precision in locations where there is no GPS signal or it is severely degraded; ultra-secure global communication networks; new computing paradigms for optimization of asset and resource allocations, discovery of new materials, and novel applications of artificial intelligence.

“The Air Force has taken a strategic approach to the progression of deep tech fields such as quantum, continuing to be world-leading researchers and bold trailblazers in the fundamental science and technology areas,” said Dr. Michael Hayduk, deputy director of the Information Directorate. “The Virtual Quantum Collider 2.0 event is a unique venture, allowing variant forces to ‘collide,’ creating an opportunity for resources, companies, and potential solutions to come together for the purpose of accelerating national quantum development.”

Rome Lab has been working on quantum technology since about 2007, according to Dr. Hayduk. “We’ve gotten great momentum and great traction.” The Innovare Center is proof of that. The center in Building 100 at Griffiss is adjacent to the county airport terminal. The three-story, 40,000 square foot facility has two research labs on the ground floor, offices and classrooms on the second and a third floor rapid prototyping area where researchers work. The site was made so Rome Labs can partner with outside agencies and companies, which had been complicated because of security factors.

The first Virtual Quantum Collider took place in mid-June. It too was held virtually, which helped attendance as it drew 1,300 compared to the 500 expected. “By going virtual we can reach a larger audience, a worldwide audience,” said Dr. Hayduk.

The keynote speaker will be Alyssa Carson, 19, “an astronaut in training, global TEDx speaker, future Mars walker, and author,” according to usafquantumcollider.com. She and her father, Bert Carson, will “discuss cultivating the next generation of visionaries and inspiring a future STEM-smart workforce,” said Innovare. STEM refers to science, technology, engineering and math.

Dr. Hayduk said Carson has been inspiring “the next generation” in the field, and her appearance will help attract people of all ages and experiences.

The event also will include a Small Business Technology Transfer private showcase offering $35 million in total awards. During the showcase, invited companies will pitch their technologies for an opportunity to receive Air Force funding of up to $1.5 million each. At the first Collider event, there were grants totaling $5 million awarded. There are no local companies in the running for funding, noted, Dr. Hayduk. “That speaks to the fact that we don’t have a quantum base around here right now.” This event, he said, should help change that.