UTICA – The sign was easy to see just off the turf at D'Alessandro Stadium. The paraphrased lyrics from a hit Jay-Z song hand-written on a large piece of fabric hanging from an unused soccer goal … 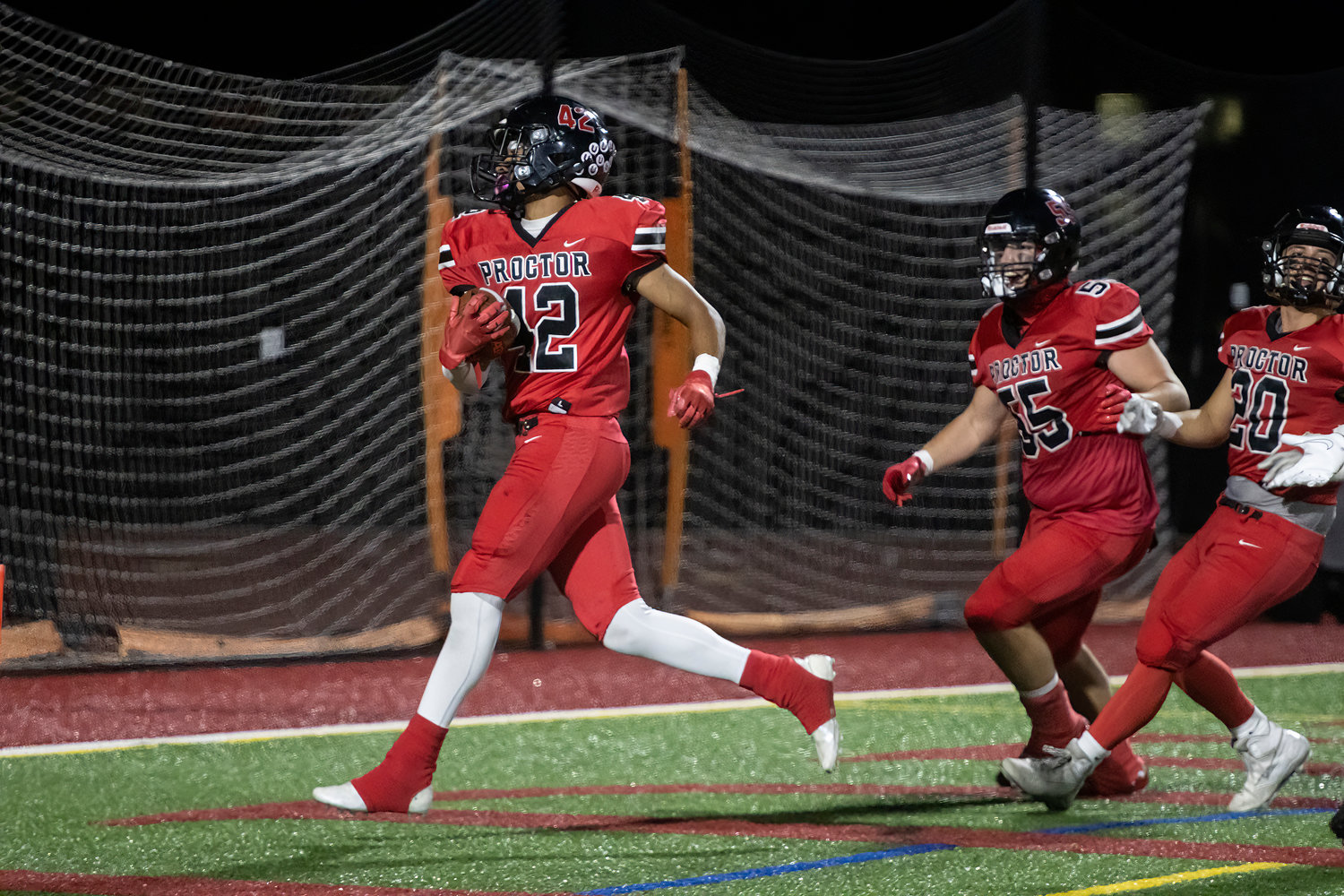 Proctor running back Kenijaymes "Magic" Johnson had two rushing touchdowns in the team's 50-8 win over Henninger on Friday at D'Alessandro Stadium in Utica. The team had more than 400 yards rushing against the shorthanded Henninger team.
Photo courtesy of Tracy Franchell 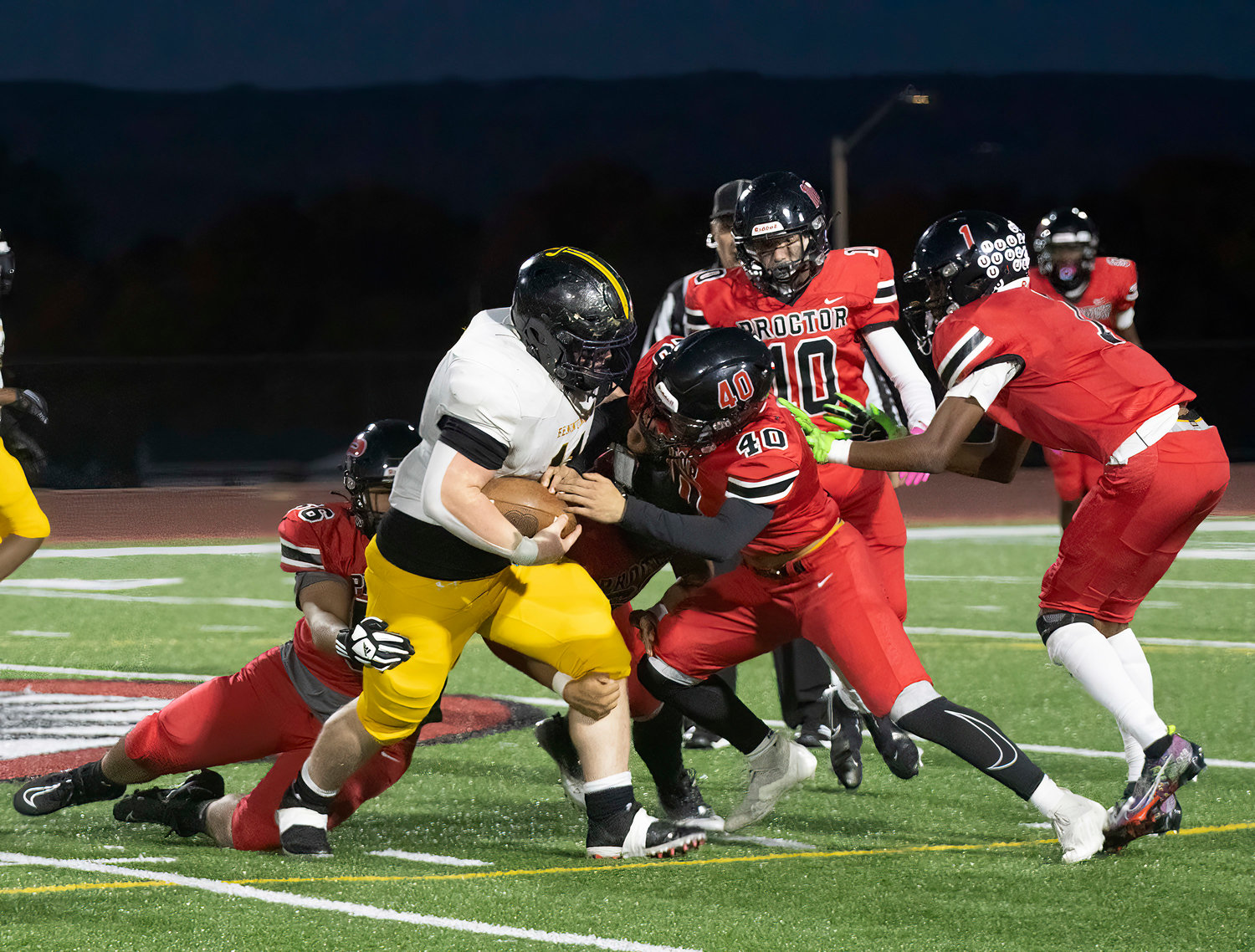 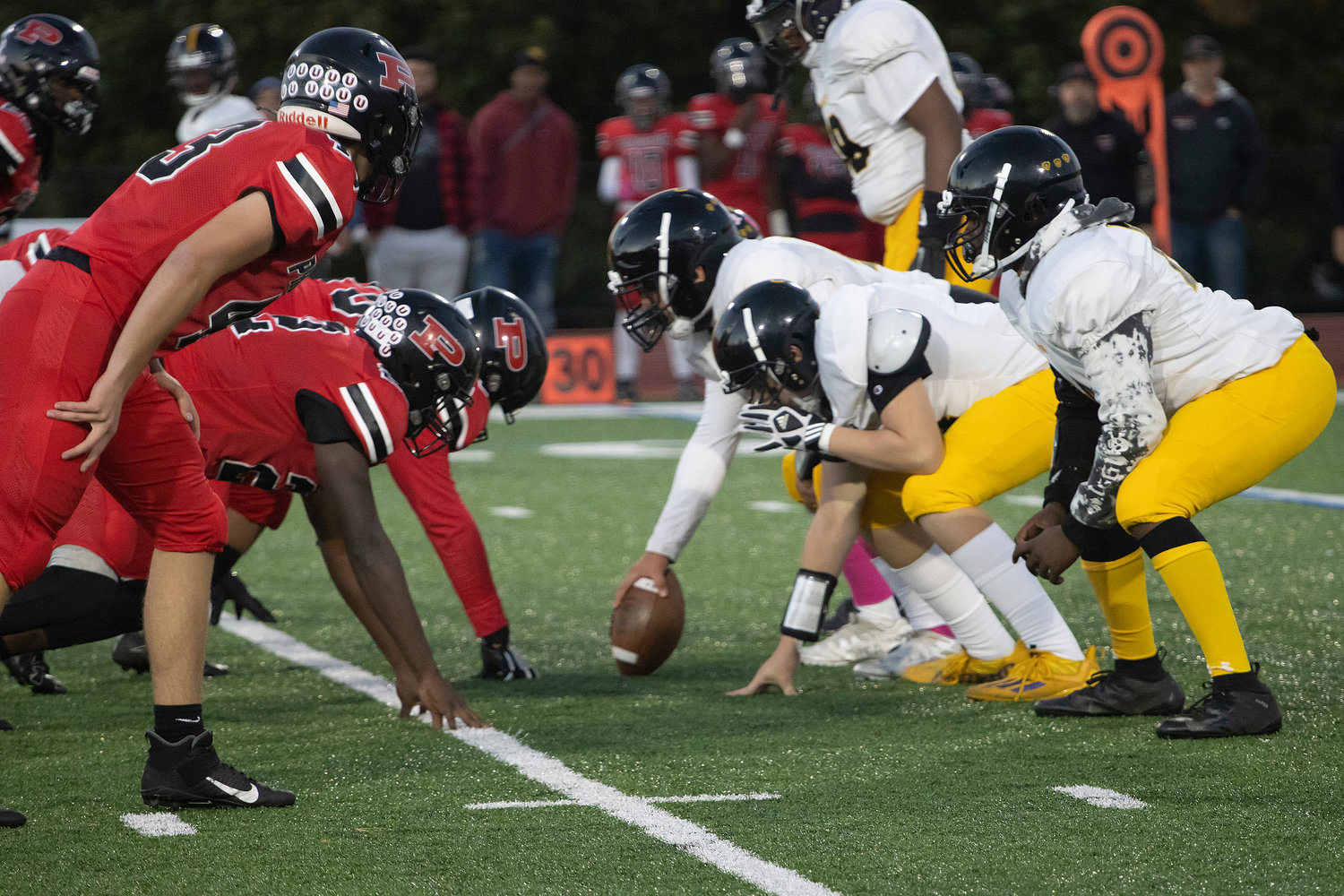 Proctor led 44-0 at halftime against a shorthanded Henninger team on Senior Night and Homecoming Friday at D'Alessandro Stadium. Proctor reached 50 or more points this season for the third time in the win.
Photo courtesy of Tracy Franchell 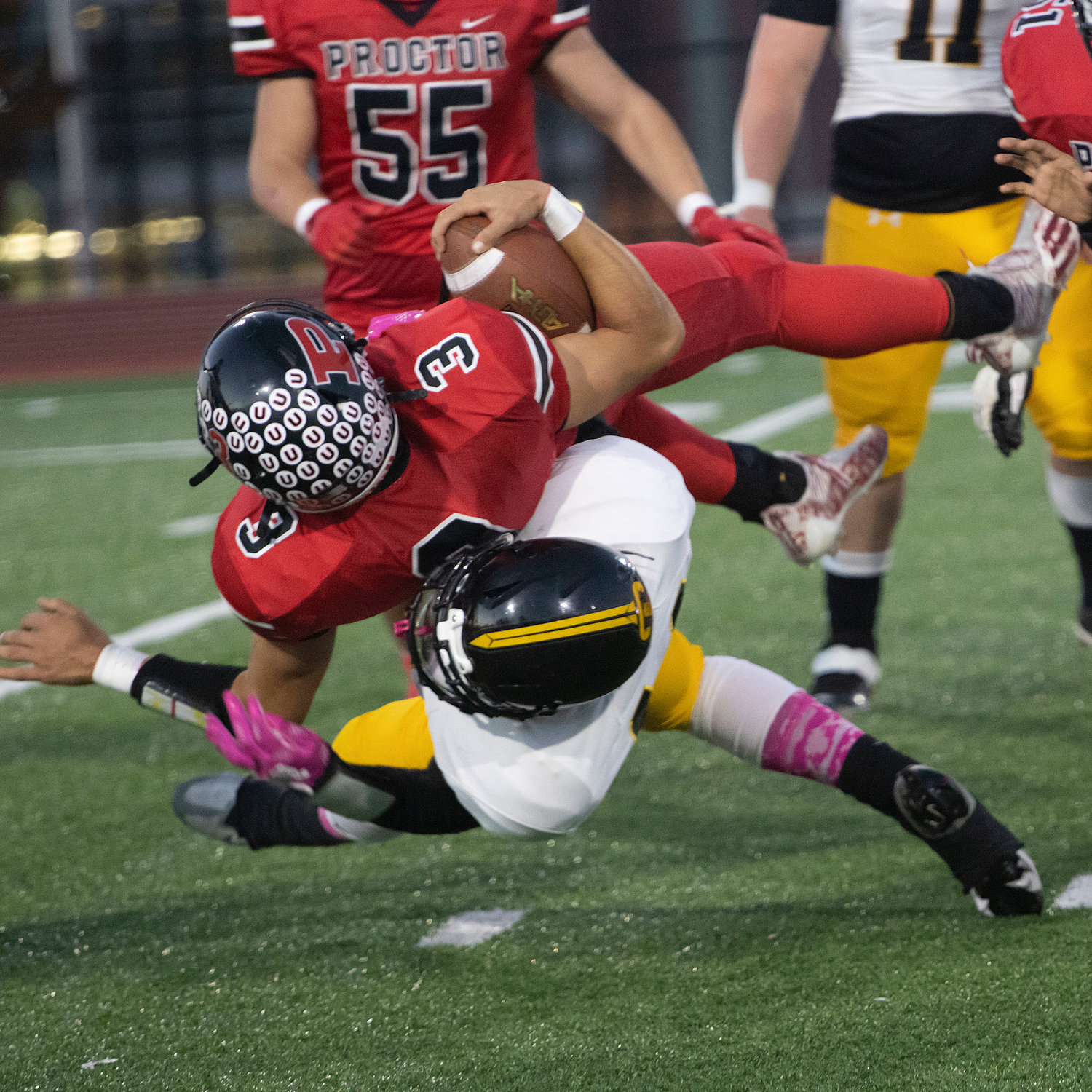 UTICA — The sign was easy to see just off the turf at D'Alessandro Stadium.

The paraphrased lyrics from a hit Jay-Z song hand-written on a large piece of fabric hanging from an unused soccer goal were easily recognizable as well: “99 problems, but your team ain’t 1.”

That was essentially spot-on for the Thomas R. Proctor football team Friday during its Class AA contest against a shorthanded Henninger squad.

The Raiders’ multi-faceted run game totaled more than 400 yards and the defense limited Henninger in a dominant and lopsided 50-8 victory in Proctor’s Homecoming and Senior Night game. With the game out of reach, the clock stopped sparingly for a majority of the second half.

As they say at Proctor: Let’s do that night football for the first time in 8 years.
It is Senior Night.
And homecoming.
We got ourselves a pretty, pretty nice little fall evening. https://t.co/23L9TbGfJQ pic.twitter.com/T3FvmC2xnC

“We just wanted to go out and execute our stuff, stay healthy and be respective of them because they played hard,” said Proctor coach Steve Strife, whose team earned honorable mention in the most recent state poll. "They were just shorthanded."

It was the first time Proctor played a Friday football game since at least 2014 and there appeared to be no issues inside the stadium. Strife and the players said they appreciated the opportunity.

“It was amazing,” said senior Leo Checo, a key contributor on the offensive and defensive sides of the ball for the Raiders (3-2 Class AA, 4-2 overall). “The atmosphere of a night game, I’ve never really felt it before. … It just felt great. I couldn’t ask for a better Senior Night.”

The win helps keep Proctor in the middle of the Class AA standings as playoffs loom.

“The run game has been great. It all starts up front with the linemen,” said Johnson, who is in his first season at Proctor after transferring form nearby Notre Dame. “It is a nice bounce-back win for us.”

The lopsided affair allowed Proctor to get the ball into the hands of some other players. A total of nine players ran the ball and the team totaled 429 rushing yards.

Perhaps the only concern for Proctor was some “weird energy” before the game.

“I didn’t know what was going to happen,” Strife said with a laugh. “I said to coaches, ‘these guys may have used their energy’ or this could be a nervous-type energy and they get it out of the way and they’re able to concentrate.”

It was the latter as Proctor recovered an on-side kick to open the game and then scored three plays later.

Proctor led 22-0 in the first quarter before Henninger had positive yardage with help from Sean Hunt Jr. (155 yards), who had a late touchdown for Henninger (1-5).

The Proctor defense – which has improved since a 62-60 victory over Whitesboro on Sept. 17, according to Strife – had two fumble recoveries and at least five sacks Friday.

“We’re making less mistakes and playing as a unit,” Checo said. “We make it work.”

Proctor is set to close the season against Cicero-North Syracuse (6-1) at home Saturday, Oct. 22.

Whitesboro 49, Auburn 26
Whitesboro bounced back after a tough home loss last week.
Standout junior quarterback Kyle Meier turned in another solid effort with five total touchdowns in the Class A win Friday at Auburn.
Meier finished with 245 yards and three scores on 25 carries and added 178 yards and two touchdowns on 10-of-16 passing.
With Friday's output, the dual-threat quarterback now has an eye-popping 30 total touchdowns this season.
Whitesboro, which dropped a tough home loss to division leading Fayetteville-Manlius last week, improves to 5-1 in Class A and 5-2 overall. Whitesboro is in second place in Class A.
On Friday, Whitesboro jumped out to a 13-0 lead with help from a touchdown run by Meier and a passing score to Tony Dorozynski (116 yards on six catches).
Meier added a touchdown run in the second quarter to give Whitesboro a 21-7 halftime lead.
His fourth score of the game pushed it to 27-13 before Auburn's DeSean Strachen's second touchdown of the game made it a seven-point game.
Whitesboro rattled off three scores including two runs from Nick Polnak (115 yards on nine carries) and another connection between Meier and Dorozynski to hold off Auburn (3-4).
Whitesboro is scheduled to close the regular-season against Watertown at 6:30 p.m. Thursday at Chiz Frye Stadium.
General Brown 48, Holland Patent 6
Holland Patent dropped its first game of the season in the lopsided Class C-2 loss as General Brown continues to roll.
Holland Patent had earned six consecutive wins to put the team among the top squads in the division. The Golden Knights are 4-1 in Class C-2.
General Brown led 21-0 at half and pushed it to 41-0 before Holland Patent scored in the fourth quarter on Jonathon Zylynski's short run.
General Brown (4-1, 5-1) outgained Holland Patent 490-212 in the game. Gabe Malcom led GB with 144 yards and a score on 10 carries. Aiden McManaman added two scores and 59 yards on 11 carries.
For Holland Patent, Jordan Koenig had 77 yards rushing on a team-best 18 carries.
The Golden Knights are set to close the regular-season against Adirondack on Saturday, Oct. 22, at 6 p.m.
Cazenovia 34, Vernon-Verona-Sherrill 20
Cazenovia remained the top team in Class C-1 with the non-league win.
Cazenovia scored three times in the second quarter to rally ahead of VVS, which got another key effort from James Wheeler IV.
The VVS senior finished with 212 yards and two touchdowns on 28 carries. He also connected with James Ward (42 yards passing) on a third-quarter touchdown catch.
Wheeler's second touchdown — which went for 60 yards —helped get VVS within six points. However, Cazenovia (5-0, 6-0) added a touchdown.
VVS (2-3, 3-4) is set to close the regular-season at 7 p.m. Friday against Southern Hills in Tully.
Little Falls 52, Waterville 15
Brayton Langdon finished with seven total touchdons and Little Falls built a a big lead en route to the Class D road win.
Landgon connected with Brayden McCumber and Chase Regan on touchdown passes and also rushed for two on his own to help Little Falls (3-1 Class D East, 5-2) go up 27-0 in the first quarter.
Langdon finished a perfect 11-for-11 for 150 yards and five touchdowns. He also added 22 yards rushing and two scores.
Chase Regan (five catches for 104 yards) had two touchdowns and Xaiver Dunn (two catches for 49 yards) and Tanner Jaquay also had touchdown catches.
Little Falls is set to close the regular-season Friday at Herkimer.
Indian River 46, Camden 28
It was the first loss of the season for Camden (2-1 Class B East, 5-1).
Connor Dean and Trey Kimball each had first-half rushing touchdowns for Camden, with trailed 24-14 at half. Statistics from Camden were not provided.
Indian River (5-0, 7-0) scored once in the third and twice more in the fourth to pull away.
Camden is set to get a visit from Central Valley Academy (4-3), which earned a 41-8 win over South Jefferson. The Camden-CVA meeting is set for 7 p.m. Friday.
Oneida 57, Cortland 0
Bryson Carinci ran for more than 100 yards, four others added a rushing touchdown and Thomas Lacy also threw for one in the lopsided non-league win for Oneida (3-4 overall).
Carinci had 135 yards and two scores on 18 carries. Pierce Relyea (82 carries on 11 carries), Elliot Calanise, Carter Urtz and Merrick Miller had touchdown runs.
Lacy finished with 112 yards on 2-of-4 passing. He also had an interception.
Sherburne-Earlville 27, Herkimer 14
Herkimer (1-3 Class D East, 1-6) got its scores in the second half after Sherburne-Earlville (2-2, 2-5) got all of its points in the first half.
No statistics were provided.
New York Mills 34, Sauquoit Valley 12
New York Mills (5-1, 2-1 8-man East) led 20-6 at halftime en route to the 8-man victory.
No statistics were provided for either team.