The Whitesboro football team has found ways to mesh together this season. 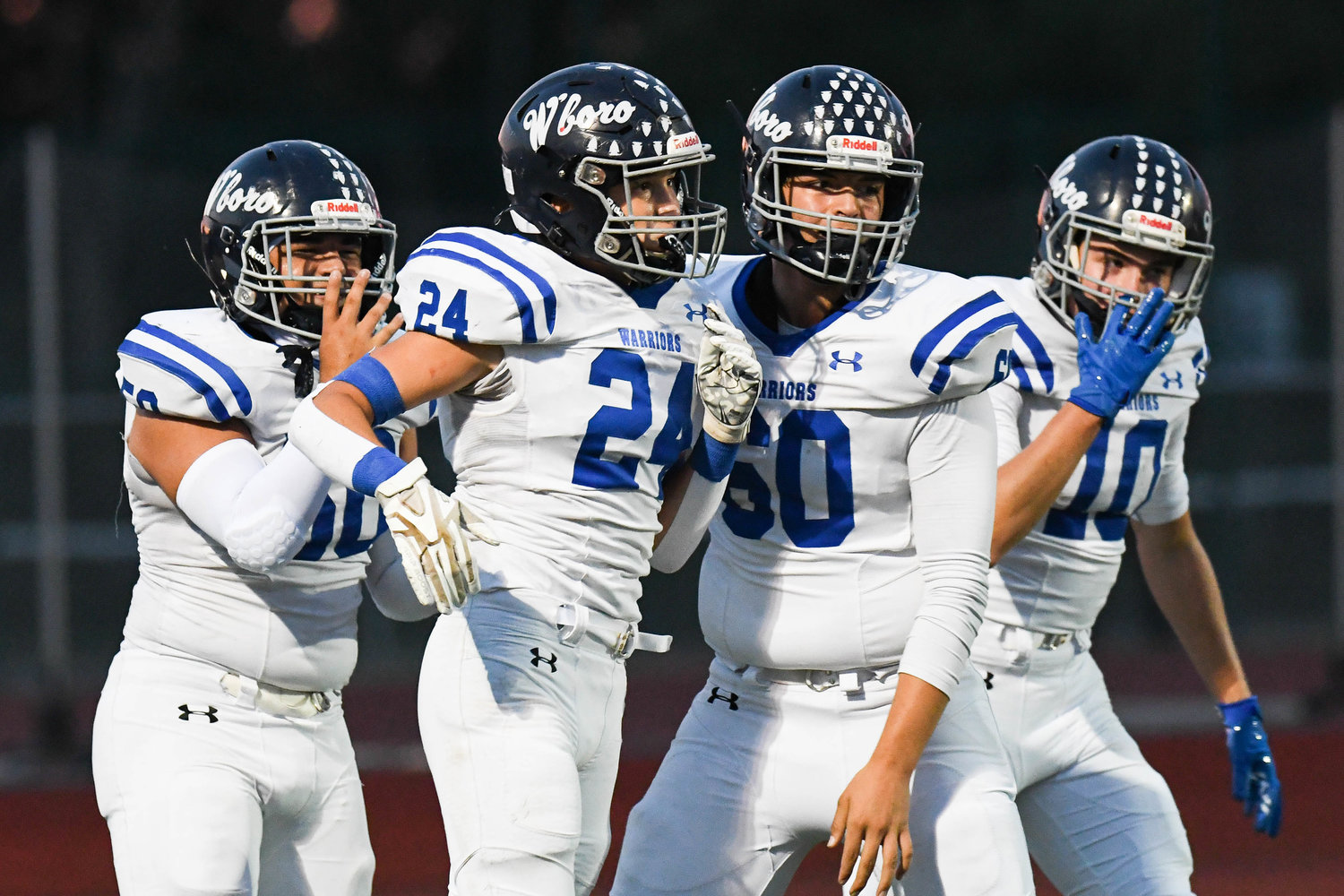 Whitesboro players celebrate with Brayden Czternastek (24) after he caught a touchdown pass from Kyle Meier on the team's second drive of the game Friday at New Hartford. Whitesboro won the rivalry game 38-19.
(Sentinel photo by Alex Cooper) 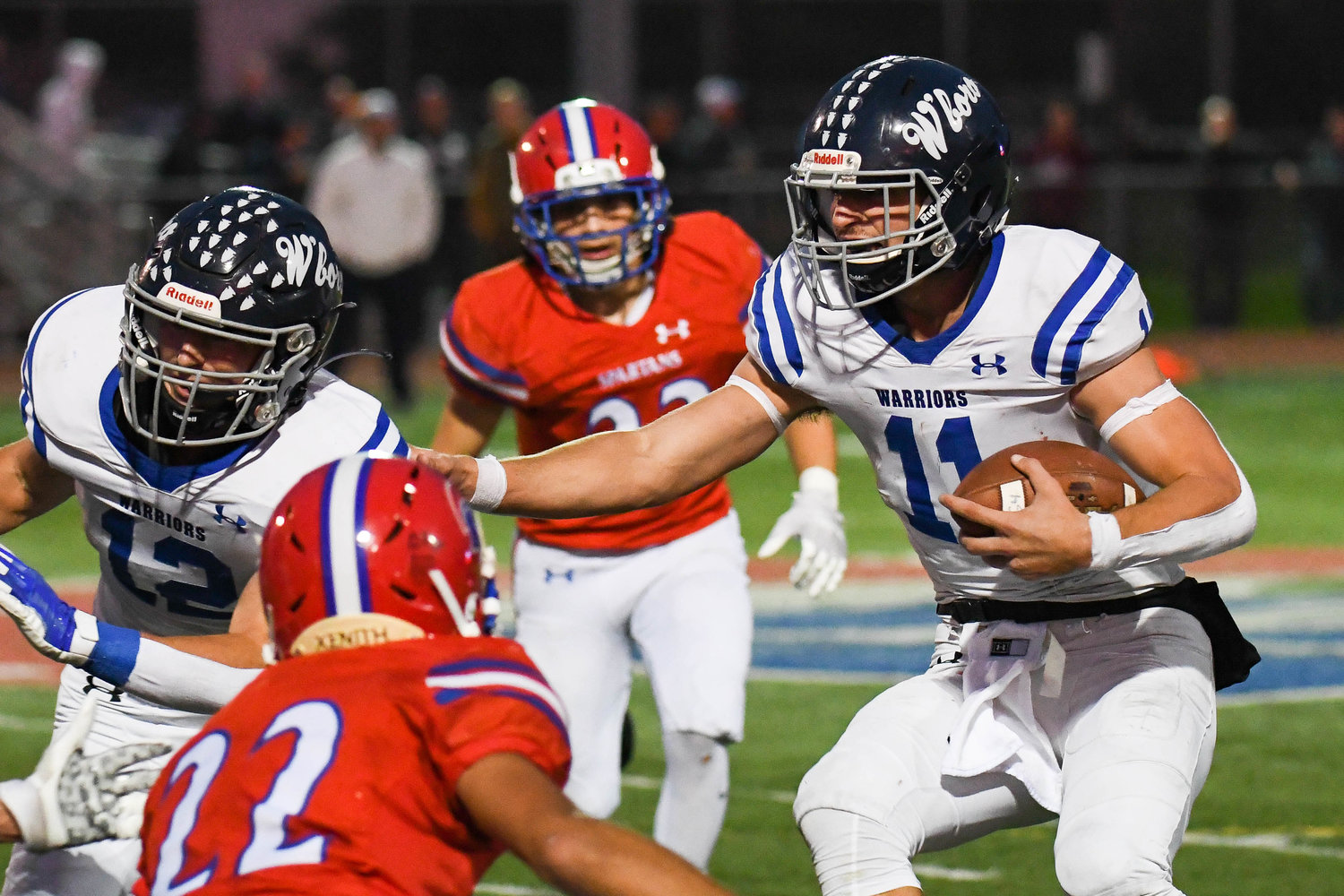 Whitesboro player Kyle Meier (11) runs for some of his more than 170 yards Friday as New Hartford player Angelo Santomassino (22) attempts to make a stop. Meier totaled five touchdowns to help his team improve to 4-1 this season.
(Sentinel photo by Alex Cooper) 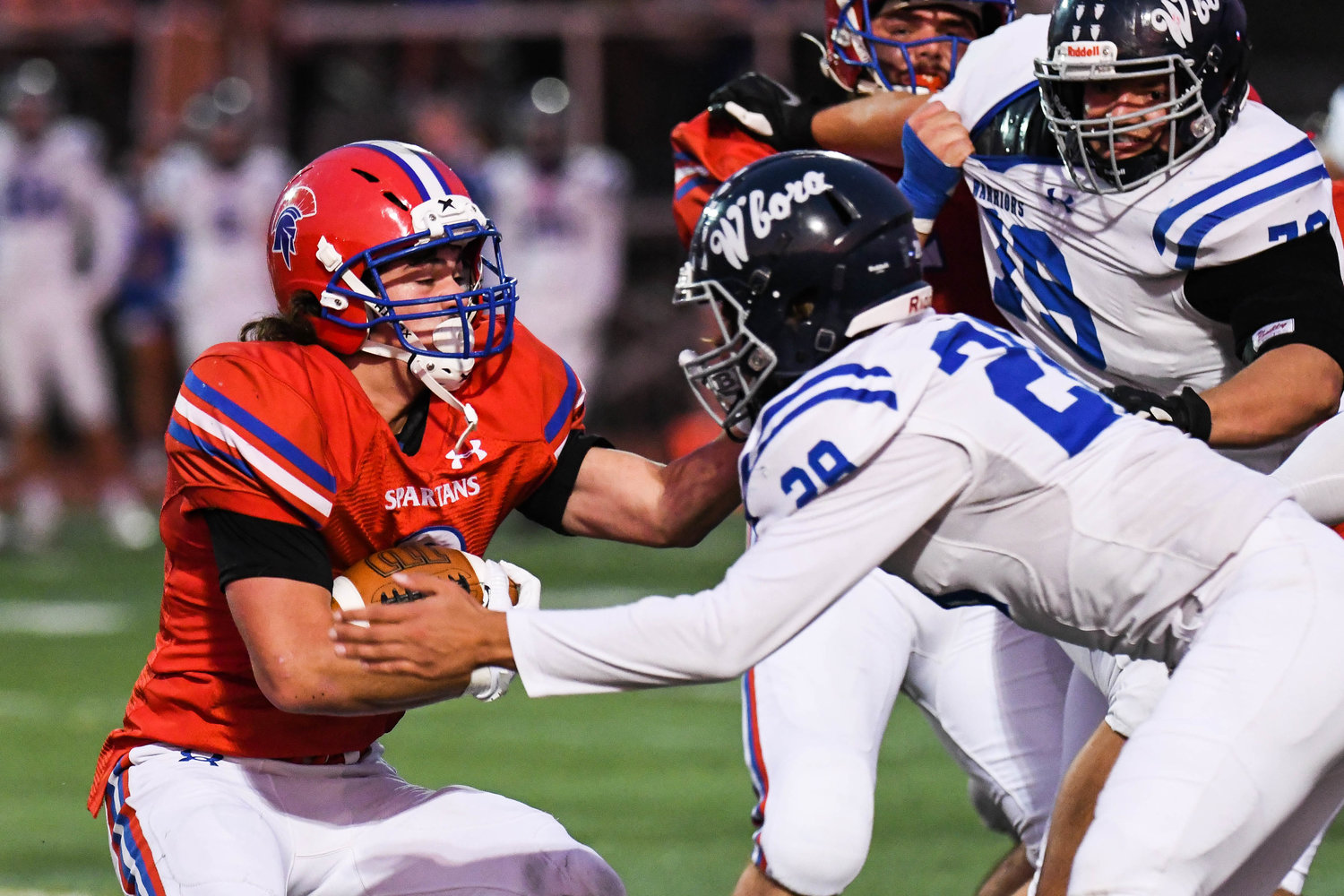 New Hartford's Alex Collver runs for some his 34 total yards as Whitesboro's Connor Wiggins (28) attempts to make a tackle during the game on Friday.
(Sentinel photo by Alex Cooper) 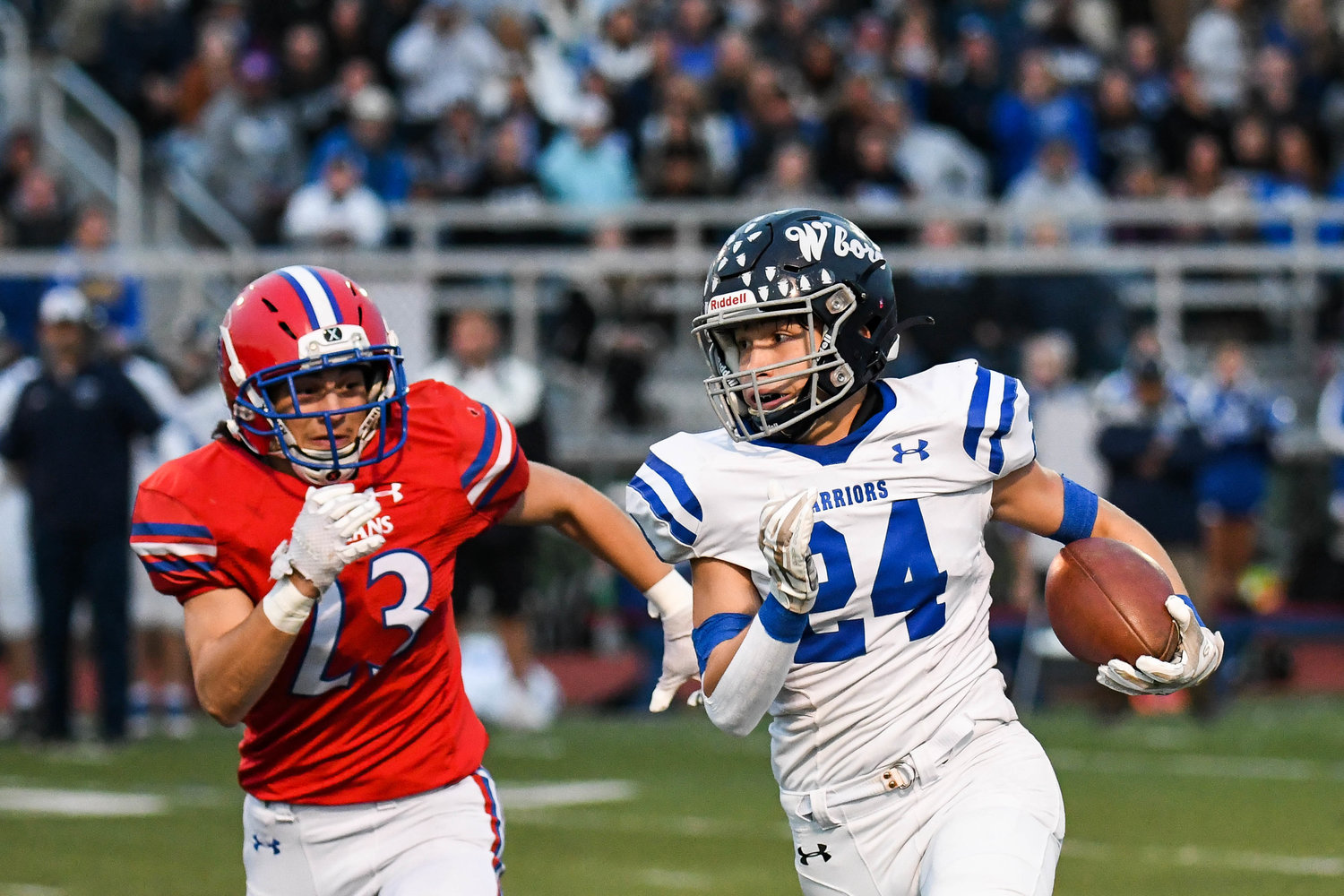 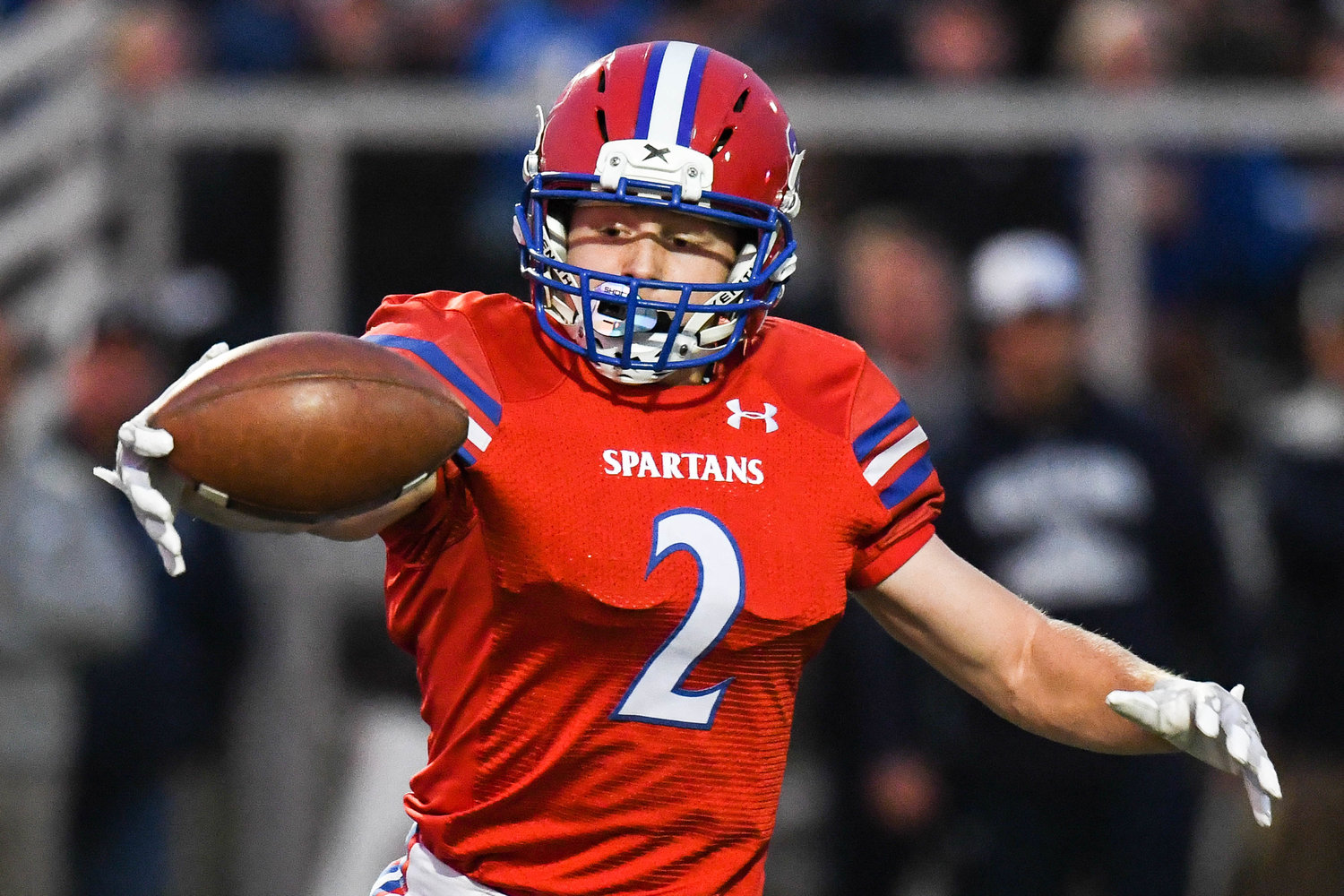 New Hartford's Cole Raux attempts to gain control of the ball during a kickoff against Whitesboro on Friday at Don Edick Field. Raux, a junior had a rushing touchdown and also caught one in the team's loss.
(Sentinel photo by Alex Cooper) 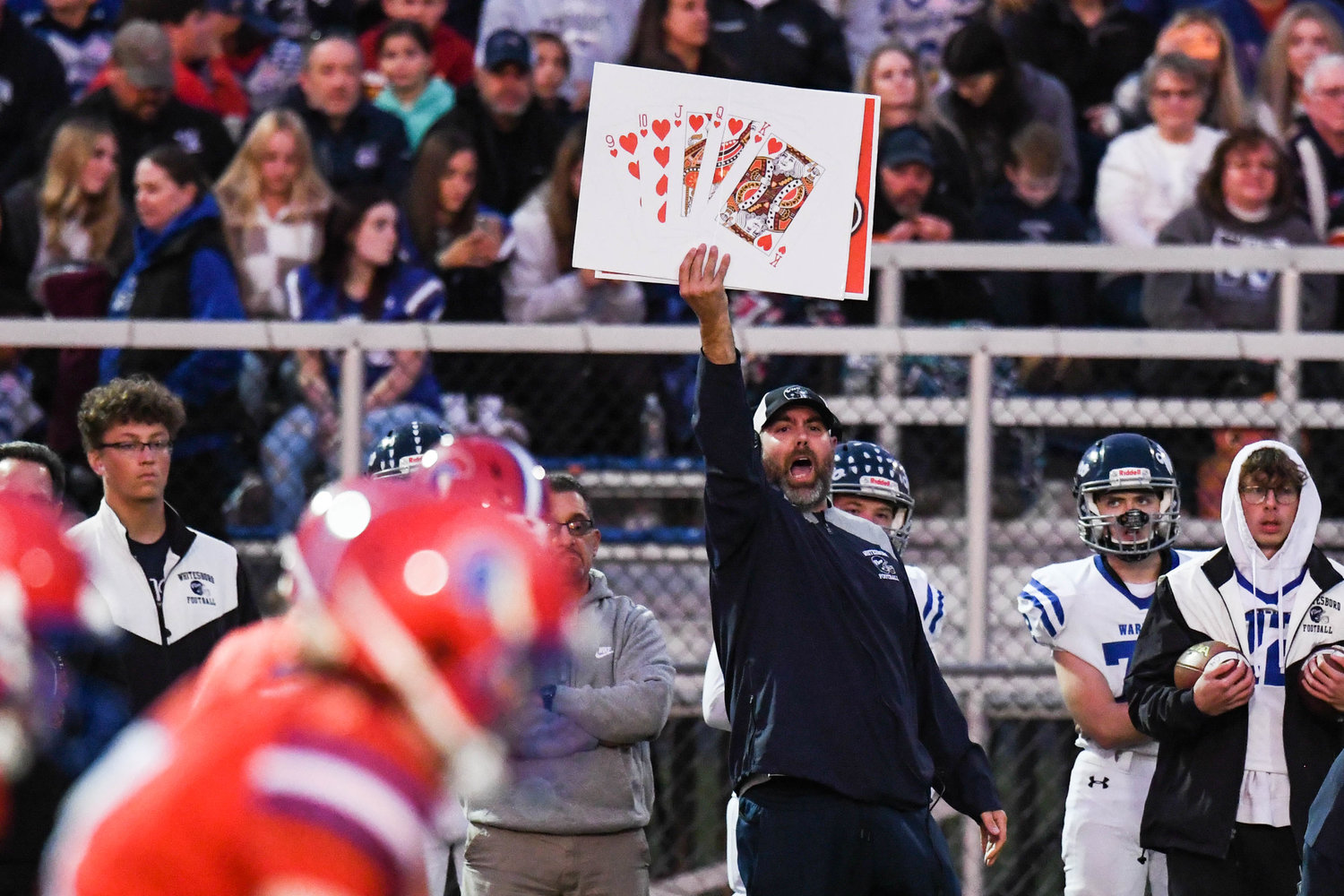 A Whitesboro coach holds up a sign for a play call during the game against New Hartford on Friday. Whitesboro won to improve to 4-1 overall this season.
(Sentinel photo by Alex Cooper) 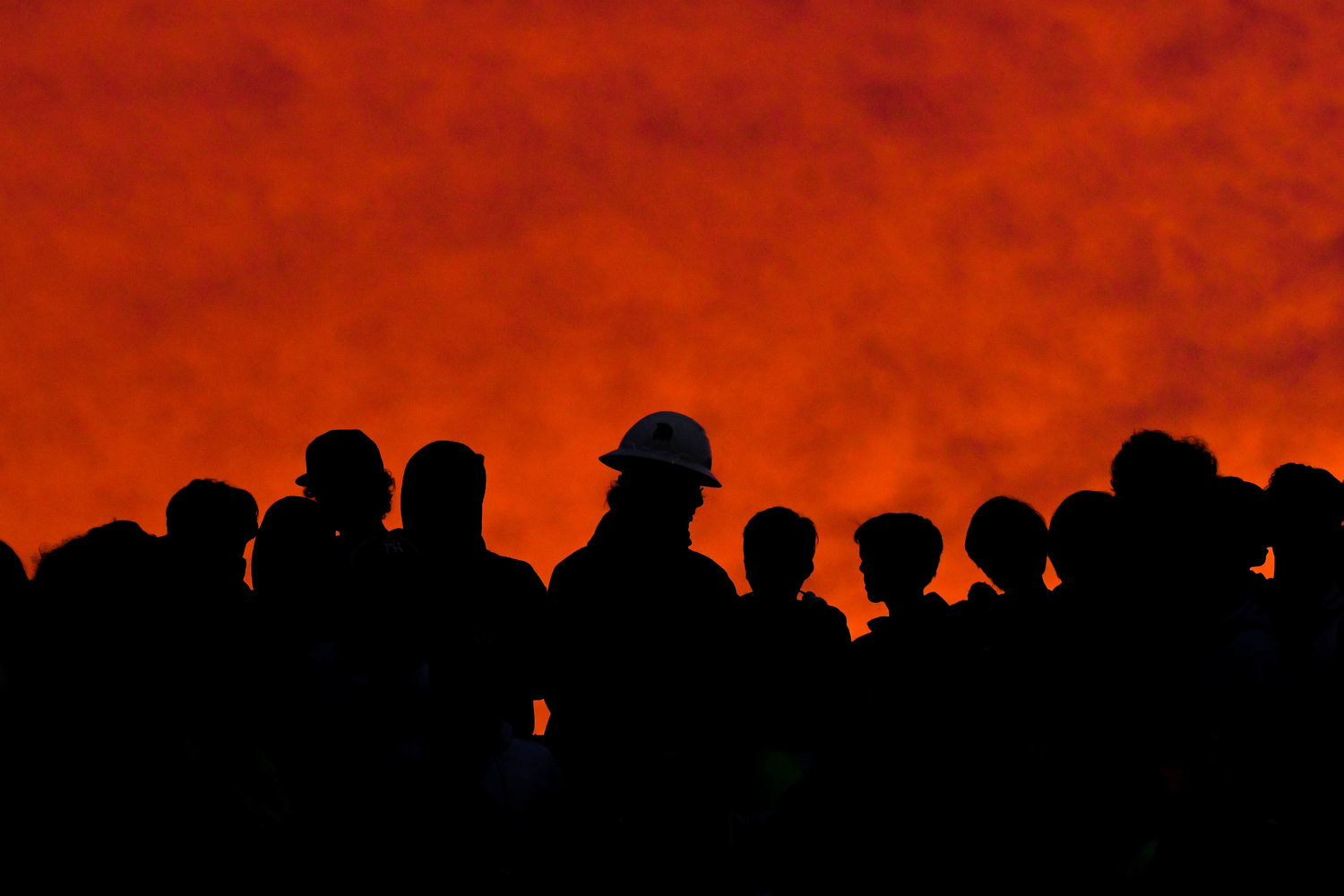 The sun sets behind New Hartford students in the bleachers during the game against Whitesboro on Friday night.
(Sentinel photo by Alex Cooper)
Previous Next
Posted Saturday, October 1, 2022 12:49 am
Ben Birnell
Sports writer
email / twitter

NEW HARTFORD — The Whitesboro football team has found ways to mesh together this season.

That’s been beneficial for a Warriors team that has a young roster – though playing with maturity, according to coach Curtis Schmidt – mixed with strong senior leadership.

Whitesboro seized on a good formula Friday in the latest meeting of a classic rivalry against the New Hartford Spartans.

Junior quarterback Kyle Meier continued his impressive season with five total touchdowns and Whitesboro’s defense stepped up to help the Warriors claim a dominant 38-19 Class A win over New Hartford in front of a packed and boisterous crowd at Don Edick Field.

“I’m just happy with their mental focus and maturity. They’re attacking the season the right way. The chemistry is good. The leadership is good. The camaraderie is good. I’m just really happy with how they’re jelling and coming together. I’m happy with the improvement of our defense,” said Schmidt, whose defense had been allowing about 30 points per game this season. “The players love playing in big games. I think coaches saw that in our kids. The focus was (great)."

It is at least the sixth consecutive win for Whitesboro (4-1 overall) over its neighboring rival New Hartford (3-2). It is just the second meeting between the schools since 2016, though Whitesboro earned a thrilling overtime win in spring 2021.

“It is New Hartford, so it doesn’t take a lot to get up to play them,” said Schmidt, who is close friends with New Hartford coach Jim Kramer. “At the end of day, they knew what was at stake. It was neat to see (the players) attack the week.”

Whitesboro has won back-to-back games since a 62-20 non-league loss to Proctor in mid-September. Friday’s win helps Whitesboro grab solid footing on second-place in Class A behind leader Fayetteville-Manlius (5-0), which visits the Warriors next week.

Meier – who scored the winning touchdown in that last meeting against New Hartford – turned in another stellaer performance Friday as he continues to show why he’s one of the top players in Section III.

He finished with more than 170 yards rushing and two scores on a team-most 29 carries. He also totaled about 140 yards and three touchdowns on 10-of-17 passing.

“This one means a lot,” said Meier, who has an eye-popping 24 total touchdowns this season. “We knew we were going to come in and do this. … I’m extremely happy with how we played. We played an incredible game in all facets.”

Meier and Whitesboro jumped out to a 19-0 lead – including a TD on fourth-down – as the team’s defense limited New Hartford to single-digits in yards on 11 plays.

Meier scored on a 37-yard run on the team’s first drive before lofting a near-perfect touchdown pass to Brayden Czternastek – who had an interception to end New Hartford’s previous drive – near the mid-point of the first quarter. Meier added the other rushing touchdown in the second quarter.

“Kyle is a special quarterback. He makes my job easier,” Schmidt said. “Sometimes, you just got to put the ball in your best player's hands and let him go win it.”

With Whitesboro’s student section nearly euphoric, New Hartford appeared frustrated. The Spartans had a handful of mistakes, including back-to-back false starts in the second quarter. Kramer chose to speak to his players.

“I said ‘take a deep breath, gentlemen.’ Let’s focus on what we do and do well,” said Kramer, who noted his team had a tough time with Whitesboro’s physicality. “We’ve played in some big games. ... But, the moment got a little too big for us and it showed.”

That would be as close as New Hartford would get as Meier connected with classmate Tony Dorozynski to help give Whitesboro a 26-7 halftime lead.

New Hartford’s defense improved in the second half, forcing a punt and a fumble on back-to-back drives. While Ambrose and Raux connected on a score, Meier’s throw connected with a leaping Dorozynski on the next drive.

“It is always nice to come out with a win (over New Hartford),” Dorozynski said. “It is definitely a pride game.”

Abraham — an NCAA Division I baseball recruit and one of the top football players in the Mohawk Valley — finished with 185 yards on 12 of 15 passing to five receivers for Proctor (3-1 overall, 1-1 Class A) to keep pace in Class AA. He also threw an interception.

Abraham has eight passing touchdowns to go along with six rushing. His 14 touchdowns are among the Section III leaders.

Liverpool got to within 24-14 in the third quarter, though Proctor senior Kenijaymes "Magic" Johnson scored in the fourth quarter. He finished with 40 yards on 12 carries.

Proctor next plays at 6:30 p.m. Friday at Baldwinsville.

Senior James Wheeler IV scored three rushing touchdowns in the second half to help rally the Red Devils (3-2 overall) and give the team back-to-back victories.

He also threw for 75 yards on 5-of-7 passing. He connected with classmate Matthew Rossi for a first-quarter touchdown that briefly gave VVS the lead.

Rossi also had a rushing touchdown in the second quarter that helped get VVS within 14-12 before Lowville pushed the halftime lead to 22-12.

Rossi finished with 63 yards on three catches and added 19 yards on six carries.

Senior Alexander Vogt had five tackles for loss and a sack.