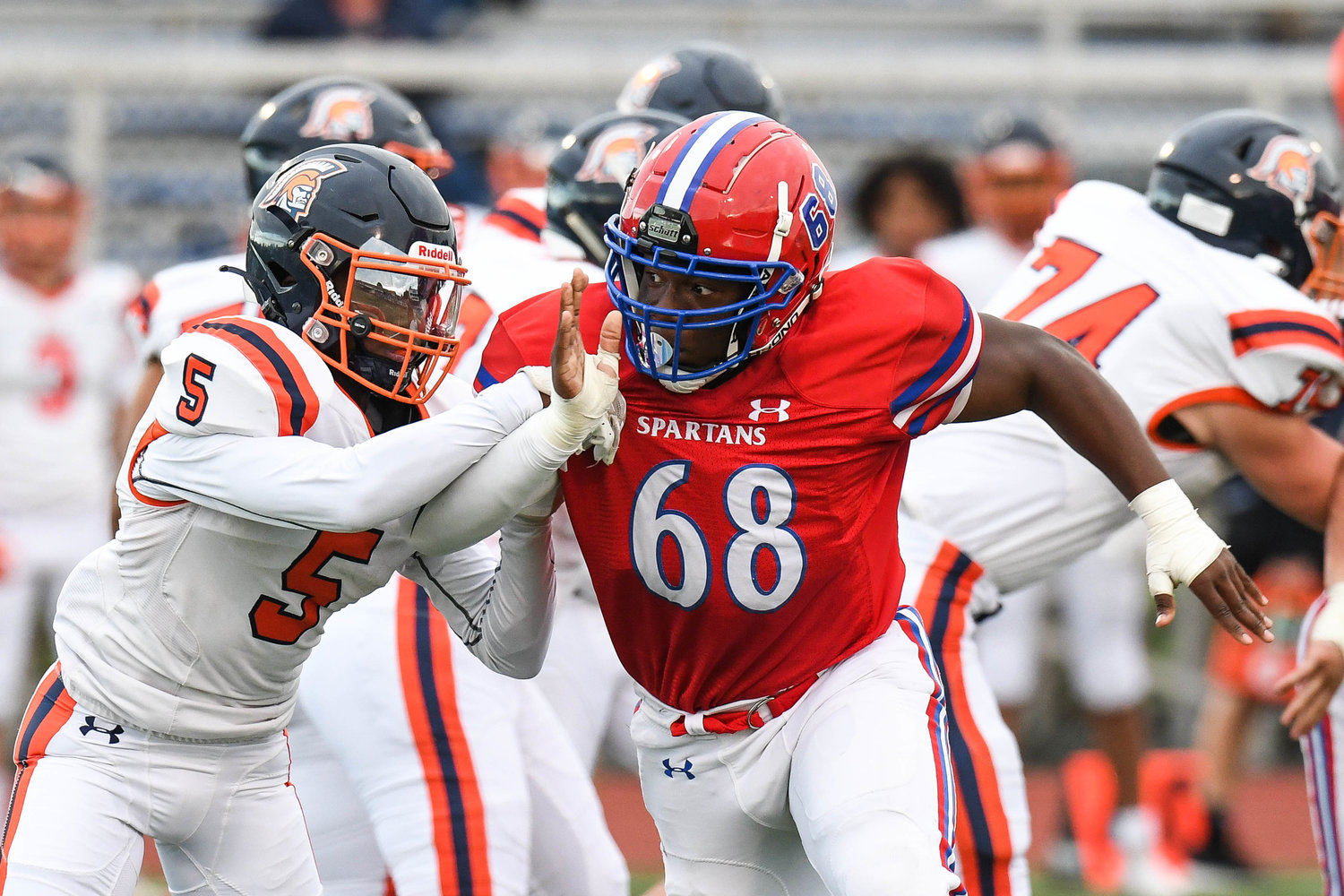 New Hartford's Wilkenson Joseph rushes the quarterback as East Syracuse-Minoa's Avery McMullen blocks during the football game on Friday. The defense helped give New Hartford its first shutout of the season with a 20-0 win at Don Edick Field.
(Sentinel photo by Alex Cooper) 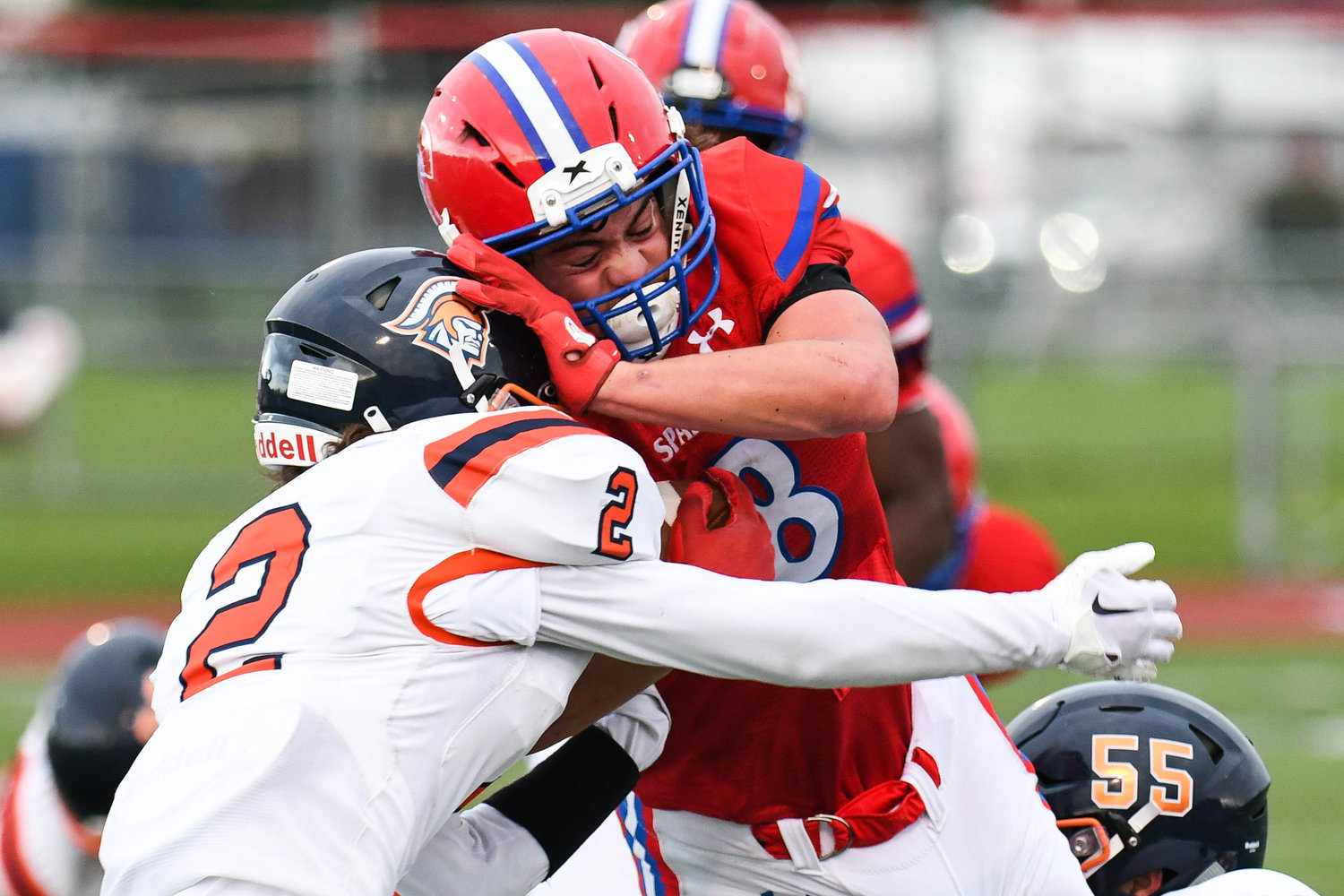 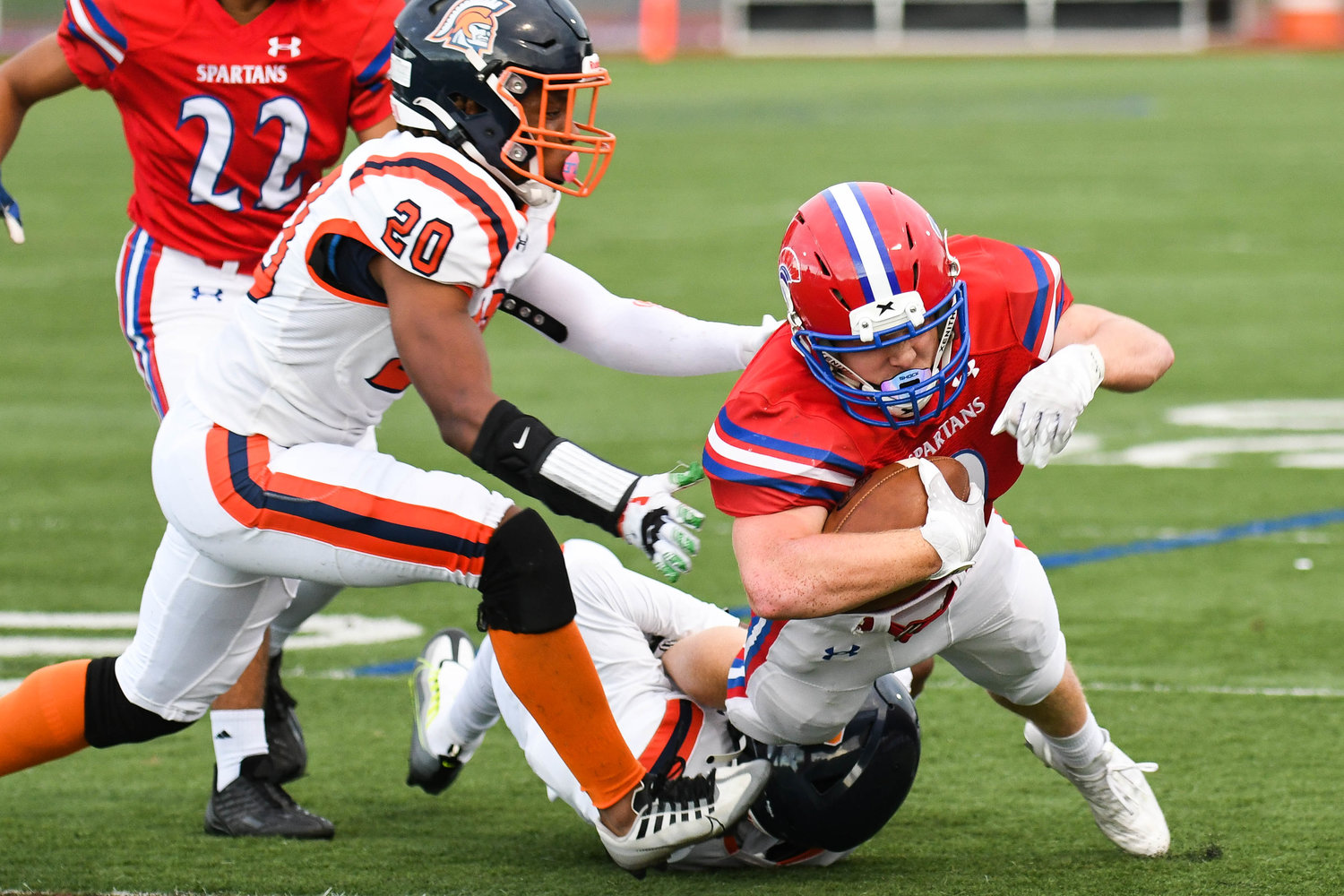 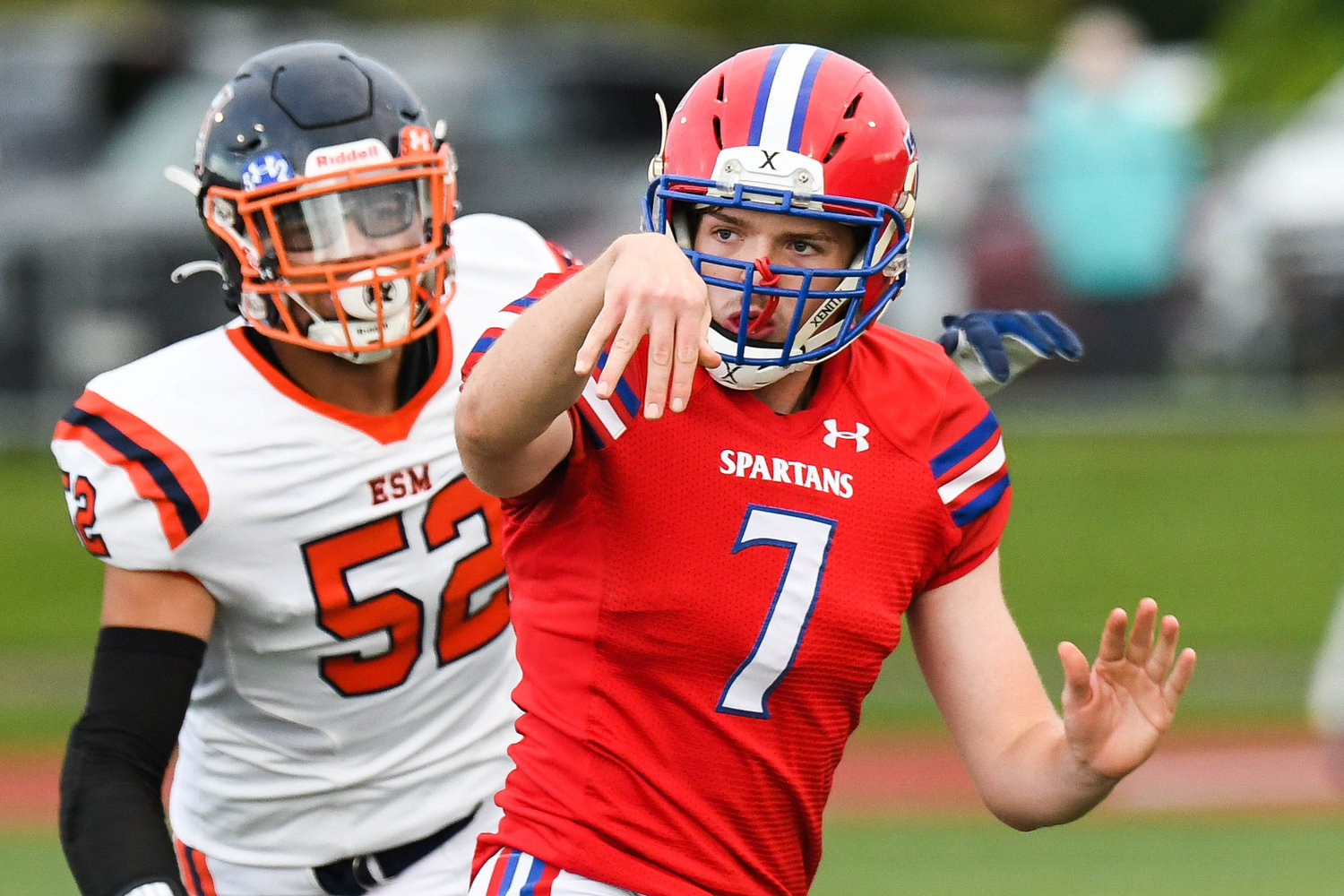 This is a really meaningful win for all of us. Because last week we lost on our home field. We really wanted to prove that moving up to Class A this year that we could really hang and take it all the way this year.”
Jarrett Sherman, New Hartford senior
Ben Birnell
Sports writer
email / twitter
NEW HARTFORD — Teams have been throwing the ball more against the New Hartford football team early this season.
No problem for the New Hartford defense against East Syracuse-Minoa on Friday.
New Hartford's swarming defense allowed fewer than 100 yards passing in making life tough for the ESM offense and Alex Collver added another key rushing performance en route to a 20-0 Class A victory at Don Edick Field.

Bustin’ out the flat cap and handwarmers for East Syracuse-Minoa at New Hartford.
It is Spartans v. Spartans, ya’ll.

DMX says it is not a — game over the loudspeakers.
But, it is. And stuff. pic.twitter.com/UNHROv6EMx

The defensive unit allowed fewer than 100 yards as the team limited ESM on the ground — minus-9, according to New Hartford stats — and pressured quarterback Nick Commisso throughout the game.
The defense’s effort was highlighted by four credited sacks – including one early in the second half by junior Ethan Daley – an interception by senior Jarrett Sherman and a fumble recovery by Jahvontay McCorkle. New Hartford forced ESM to punt four times. There was also a turnover on downs.
“Early on in the game, we got used to their tendencies,” said Sherman, whose eight tackles were tied for a game-best with junior Logan Banek. “We never gave up on plays. We just blocked or hit straight to the whistle and never game up.”
Junior Nick Perrotta added seven tackles and a sack. Banek, Daley and big sophomore Wilkenson Joseph also were credited with sacks.
The result helps New Hartford bounce back from a tough one-point loss at home to West Genesee last week. New Hartford is 2-1 overall after moving up to Class A this season.
“This is a really meaningful win for all us,” said Sherman, who has two interceptions in three games. “Because last week we lost on our home field. We really wanted to prove that moving up to Class A this year that we could really hang and take it all the way this year.”
Collver, one of the top running back’s in Section III, continues to be an impact player for New Hartford. He finished with a season-best 216 yards on 28 carries. His touchdowns (five and 18 yards) in the third and fourth quarters helped provide cushion for New Hartford.
His 509 yards rushing are second-most in Section III, according to the High School Sports Stats website.
“Alex is a proven player in the area. He had a good week of preparation and was excited to get our here,” New Hartford coach Jim Kramer said. “He was excited to get our here and run again. He’s our workhorse. Our offense runs through him. What I thought was important, especially early on, was that we were able to get some other people involved. That allowed not the total focus to be on him. As we continue to grow, we need to be multi-dimensional for us to succeed.”
Senior quarterback Dominic Ambrose finished with 99 passing yards and a touchdown pass to two-way standout Tommy Vitagliano to give New Hartford the lead for good in the second quarter.
Ambrose, who had 18 yards rushing, finished 7-of-14 passing with completions to junior Cole Raux (45 yards receiving, plus 17 yards rushing), senior Angelo Santomassino (10 yards) and Daley (38).
A thunderous sack by Daley on the second play from scrimmage in the second half was key as it pushed back ESM 10 yards. ESM went 3-and-out and New Hartford scored seven plays later on Collver’s first score.
“That (sack) was a momentum swing. He came off the edge and he made a good, clean, hard hit on the quarterback,” Kramer said. “I think that got this place pretty excited.”
Early in the fourth quarter, Sherman snagged an errant throw by Commisso (9-of-20 passing). New Hartford scored eight plays later to increase the lead.
“I just took advantage of the situation they put me in,” Sherman said. “Last year we could relax a little bit because we could guess that teams would be more run-heavy. There’s a lot of good quarterbacks. We have to stay alert.”

Homer jumped out to a 35-0 lead at the half and extended the lead in the second to hand Oneida the setback.

Oneida (1-2 overall) got two rushing touchdowns each from Gavin Sweet and Bryson Carinci in the second half.

Bishop Ludden 31, Clinton 14
Clinton got to within 21-13 at halftime with help from a touchdown pass from Ryan Chmielewski to Kooper Kulpa.
However, Bishop Ludden got some cushion with a fourth-quarter touchdown.
Clinton, whose stats were not provided, dropped to 1-1 with the setback.

Lowville scored twice in the first quarter and built a 36-point advantage at the half to secure the Class C win.

Brian Thomas and Brendan Hamburg each had two touchdowns. Dalton Meyers had a rushing touchdown and threw one to Hamburg.

Westmoreland/Oriskany is 0-3 overall this season after losses to Clinton and Holland Patent.

Jase Smith had five carries for 47 yards and also had a team-best seven tackles. Javante Brill-Rollins had two catches for 26 yards and had 13 yards rushing.

The Herkimer County teams had another meeting decided by fewer than seven points.

On Friday, both teams went without a touchdown in the first overtime. In second OT, Brayton Langdon ran eight yards for the score.

The Mustangs (2-1) cut it to two on a 20-yard rushing TD from Shaun Jones but failed on the conversion.

After a scoreless first half, Mount Markham scored in the third quarter on a touchdown run by Jones, who stats were not probided. Following a 2-point conversion pass from Jones to Noah Trago, Mount Markham led 8-0 lead.

The Mounties scored a few minutes later on a 30-yard reception from Langdon to Braden McCumber. Xavier Dunn converted on a run to make it 8-8.

Dolgeville (2-0) scored 48 points or more for the second time in as many weeks.

The team, which won a Class D sectional title last fall, opened the season with a 68-20 win over Herkimer.

Cade Mosher opened the scoring the first quarter with a 52-yard run and then connected with Michael Blaskey and Kamryn Comstock on touchdown passes in the first half to build the lead.

His second rushing touchdown of the first half helped give Frankfort-Schuyler a 28-6 halftime lead.

He connected with Lionel Colthurst four times for 221 yards and three touchdowns.

Martino also added 13 tackles on the defensive side. Amar Perry and Michael Ferguson were each credited with 16.