Hamilton College students embrace day in service of others

As he sorted through books as a volunteer at a recycling event at Jervis Public Library today, Hamilton College freshman Harrison Sayre of King of Prussia, Pa. said of “I enjoy it....It’s nice to …

Hamilton College students embrace day in service of others 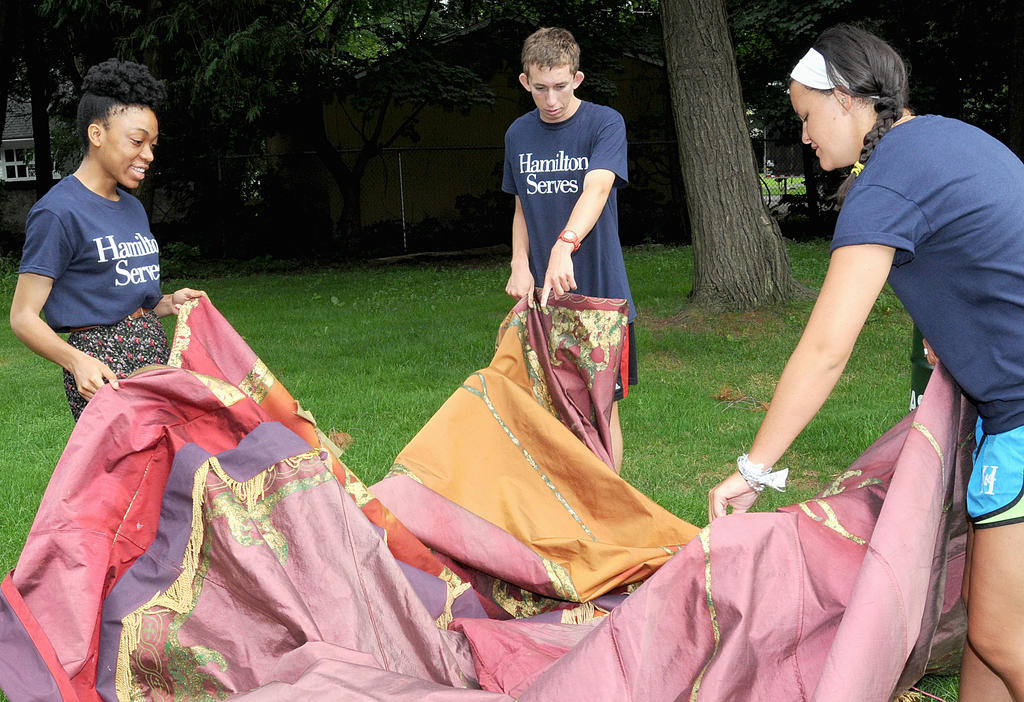 GETTING READY TO PITCH — From left, Hamilton College freshmen Chidera Onyeoziri of Brockton, Mass., Case Tatro of Titusville, Fla., and Emma Raynor of Rockville, Md. get started setting up a tent this morning at the Rome Art and Community Center for the upcoming Renaissance Revels event. They were part of the annual Hamilton Serves day of service in which freshmen at the college volunteered at about 56 non-profit organizations in the Mohawk Valley. 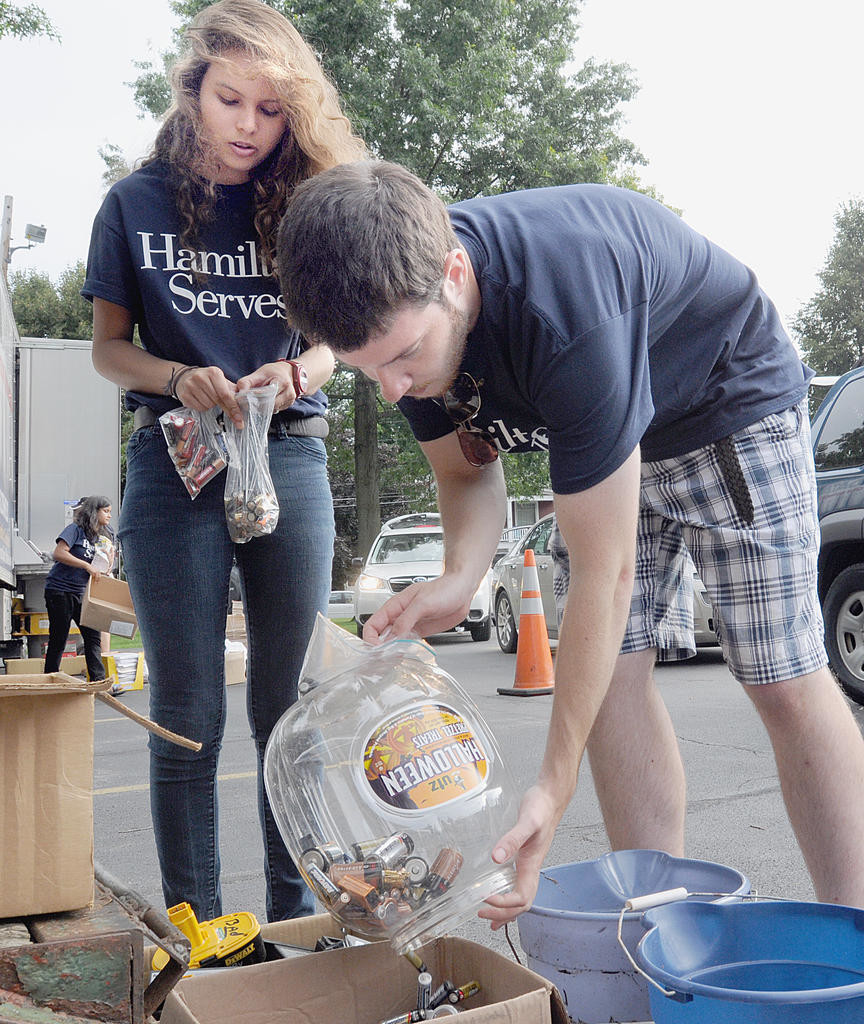 SORT IT OUT — From left, Hamilton College freshmen Jackie Rodriguez of Orlando, Fla. and Michael Hoffman of Red Wing, Minn. work together this morning to separate batteries and other scrap items during a Recycling Day at Jervis Public Library. They were among Hamilton freshman volunteering at about 56 non-profit organizations in the Mohawk Valley, as part of the college’s annual Hamilton Serves day of service program. 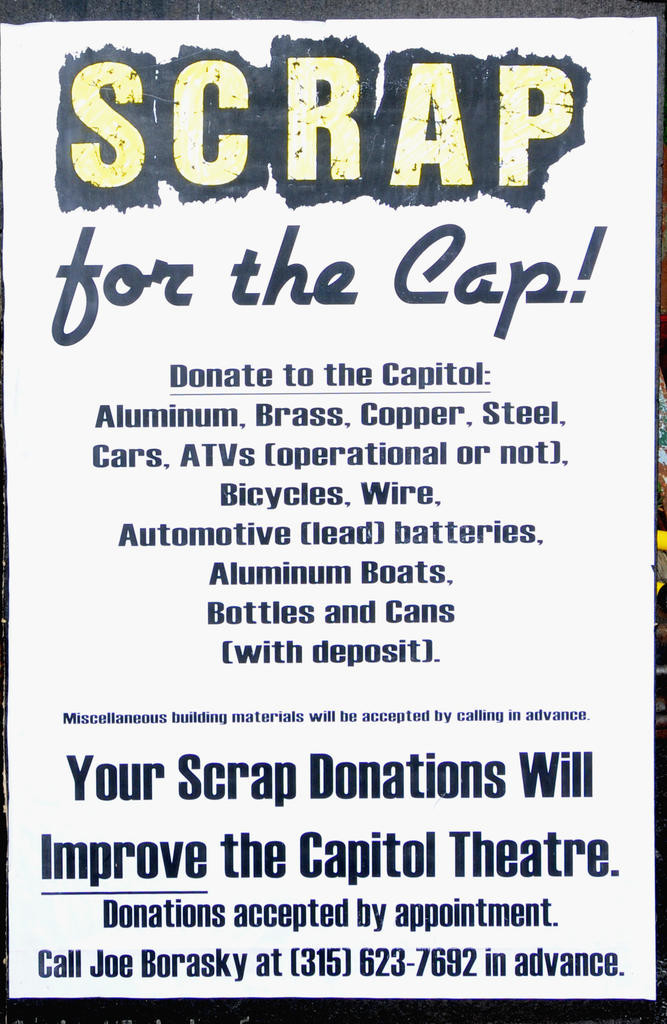 As he sorted through books as a volunteer at a recycling event at Jervis Public Library today, Hamilton College freshman Harrison Sayre of King of Prussia, Pa. said of “I enjoy it....It’s nice to know I’m helping people....And I like books.”

Nearby in the library parking lot where scrap donations were being gathered to help benefit the Capitol Theatre, fellow Hamilton College freshman Jackie Rodriguez of Orlando, Fla. remarked “I love doing this kind of volunteer work....It brings the community together...helps the community.”

A few blocks away at the Rome Art and Community Center, Hamilton College freshman Chidera Onyeoziri of Brockton, Mass. prepared to set up a tent for the upcoming Renaissance Revels event. While she was “not at all” familiar with what she would be doing at the site, she embraced it as a way to connect outside of the college; she had heard that Hamilton College is in a rural setting, and the volunteering was “cool...connecting with the towns surrounding it.”

The three were among an estimated 471 Hamilton freshmen volunteering at about 56 non-profit organizations in the Mohawk Valley today, in the seventh annual “Hamilton Serves” day of service that is part of orientation. Students were transported to the sites to spend four hours volunteering on projects. The locations included libraries, community centers, arts organizations, schools, shelters and youth organizations, plus others.

About 8-10 students each were at Jervis and the art and community center. Among their other comments:

“I think it’s a privilege...I wish a lot more colleges would do it,” said Alexander Wear of Annapolis, Md. He mentioned that such work helps to “take stress off the organizations,” plus It “builds the freshman community a lot more...everyone working together...outside our comfort zone.”

The experience is “fantastic,” said Michael Hoffman of Red Wing, Minn., and is a very good opportunity to “get to know people by doing community service.”

Several students were already familiar with volunteer work from their hometown areas. For example, Hoffman said he was on an EMT squad; Rodriguez had been in similar recycling events such as at Jervis; Sayre has helped at library events before; Onyeoziri was on a mayor’s youth council working with at-risk teens in urban areas; Wear helped at food pantries and church youth group educational programs.

In the local program, the students are “engaged in such a meaningful way....They get to know the effects of their work...really awesome kids,” commented Tanya Davis, executive director of the Rome Clean and Green program. It was among organizations working in partnership with the Jervis event, and also was involved in Hamilton students helping to prepare the site for a greenhouse project at Denti Elementary School.

Jervis has recycling events twice a year, and schedules its August event to coincide with the Hamilton College service day, said library director Lisa Matte. The students assist library staff and other volunteers, along with various organizations in partnership with the event, she explained.

The Hamilton Serves program is geared to help students feel engaged in the community, to educate them about the area’s needs as well as its offerings, and to assist non-profit organizations, the college said.