Josh Gregory set a goal when he joined the SUNY Poly men’s basketball team a few years ago. 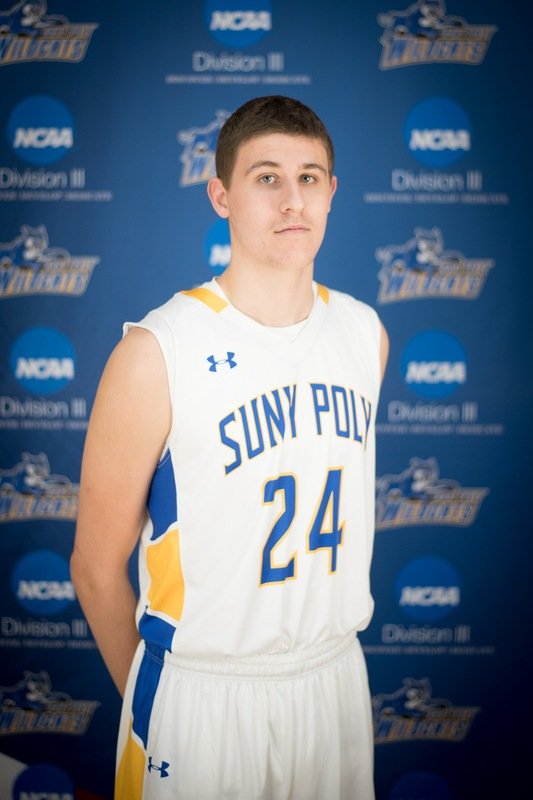 Josh Gregory set a goal when he joined the SUNY Poly men’s basketball team a few years ago.

The target was clear for the Whitesboro standout: Play professional basketball after his time with the Marcy-based NCAA Division III school.

Gregory, a 6-foot-8 power forward who concluded a standout career earlier this year, recently signed a contract to play for UBSC Raiffeisen Graz in Austria. The team is part of the 10-team Austrian Basketball Superliga, which is the top tier of pro basketball in the country.

“It just shows all the hard work that I set out for myself has paid off,” Gregory said Thursday in a phone interview with the Daily Sentinel. “I sat with (SUNY Poly) coach (Rob) Schoener, who has been my coach my whole college career and we talked about what my goals were. Since the first day I showed up freshman year, that was my goal: To play as a professional after college.”

A picture of Gregory signing his contract was posted to the SUNY Poly basketball team’s Twitter account. Gregory said he’s got some other paperwork to finalize, but anticipates leaving for Austria in a few weeks.

“This seems like the best place for me to continue my playing career for years and years after this,” said Gregory, who was part of a USA NCAA Division III men’s basketball team that went to Brazil in 2021. “To be able to play at the top division right out of my first year of school, it is a great opportunity for me.”

Gregory said it was a stressful process to decide where to play. He said he had interest from a couple teams from Germany, Portugal and in South America, like Chile.

Gregory said he got advice from former Holland Patent and SUNY Poly star and coach Dave Golembiowski, who played overseas.

“He just told me to make sure I had no regrets about (playing overseas). Because you’re leaving everything here to go play,” Gregory said. “You have to be able to enjoy every second of it or else you’ll regret it. I’m fully on board with it.”

Gregory raised his profile with help from a prospect camp in July in Las Vegas. He was among 150 players from the NCAA Division I, II and III levels. By the end of the camp, he said he was ranked among the top 25 players. One of his teammates from Austria was there and a team official saw him play, Gregory said. The Austrian team then sent him an offer.

“To be able to get into the top-25 just shows that I belong in the high-level basketball world and all my hard work has paid off,” Gregory said. “I never doubted myself. I always believe I’m one of the best out there.”

Gregory also has a website (http://jgreg.isbeast.com) highlighting his basketball career that he created with help from his father, Scott, who is a website designer. Gregory said he communicated with some teams with help from the website.

Gregory, a medical redshirt after breaking his hand as a sophomore, finished a standout career as a versatile player at SUNY Poly in February. He said he had a good idea he could play professionally after a strong start as a sophomore.

Gregory said he became more mature during his time at SUNY Poly. He added he also learned how to understand the game better.

“It just taught me a lot – not about basketball, just the real world. It taught me how to work hard. People don’t see D-III guys in the same light as D-I and D-II. But, playing D-III basketball is just as hard as that. I just wanted to prove myself and my coaches believed in me. It helped me keep going. No matter what my success was, it is just being able to continue to work hard,” said Gregory, who looks up to NBA star Kevin Durant as a model for his game. “I still have a long way to go. I still have to prove myself when I play in Austria.”