The Great New York State Fair is as much about eating as it is about playing. Here are five fair foods rated by Daily Sentinel staff writer Carly Stone while exploring the fair. 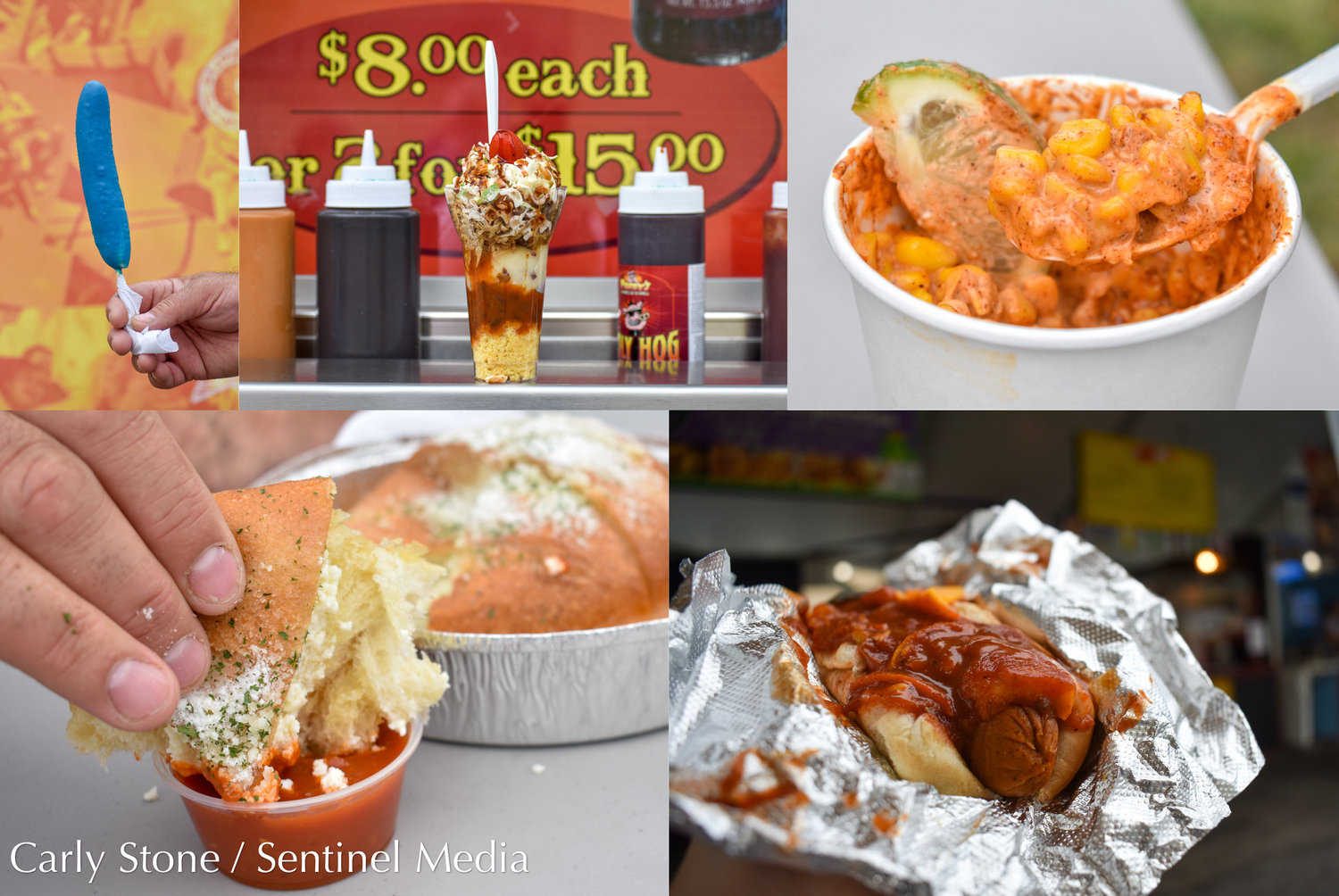 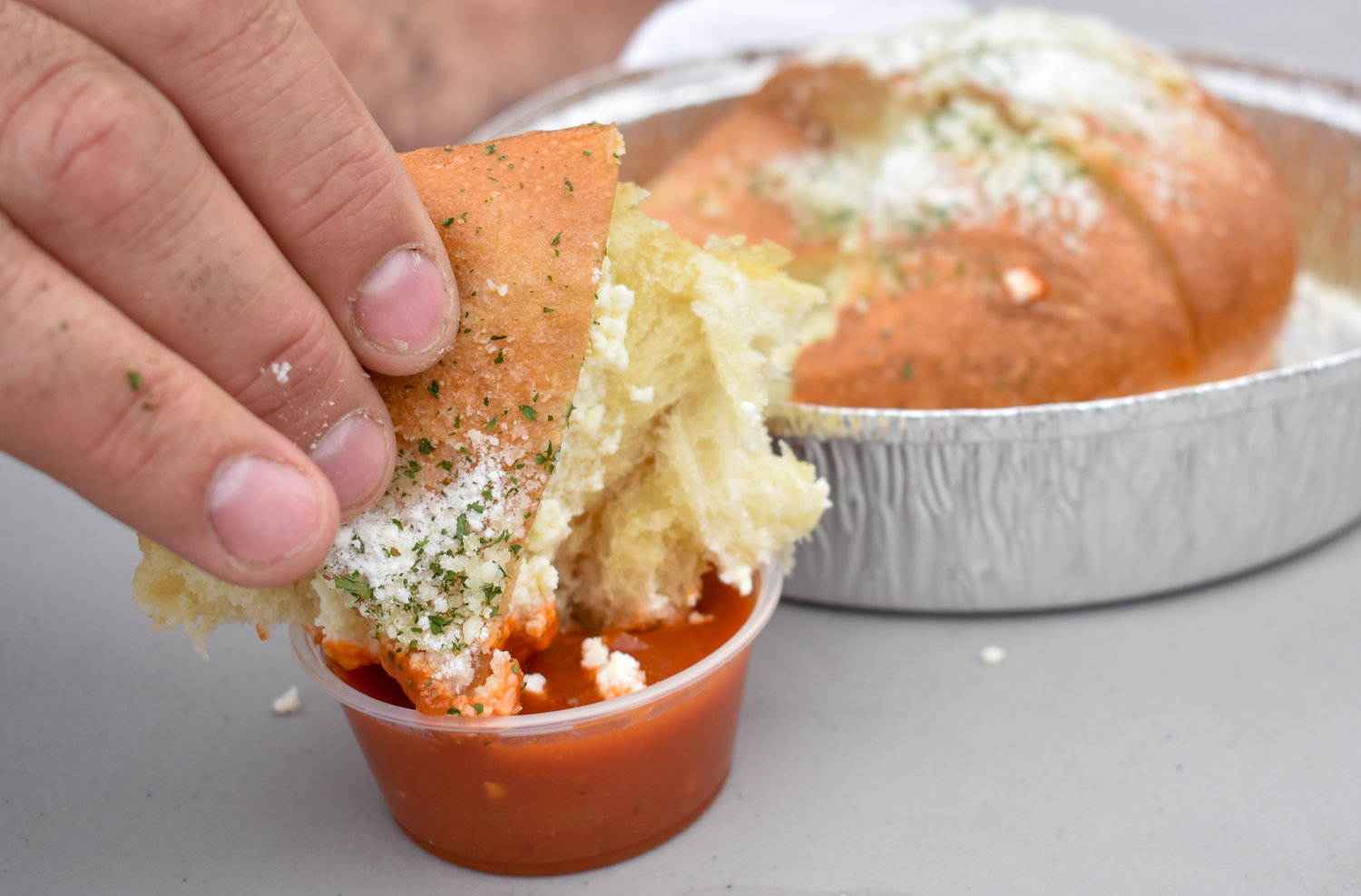 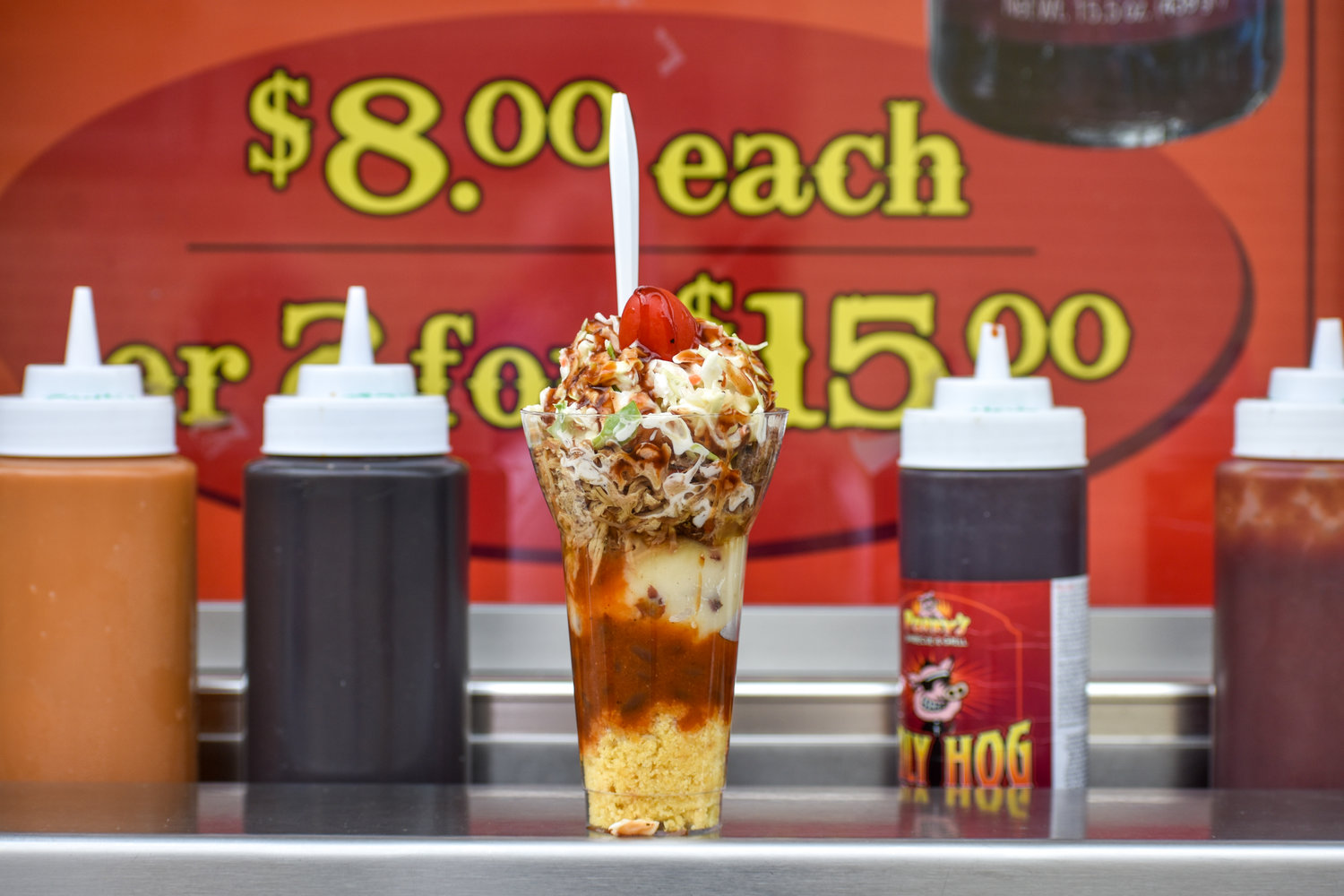 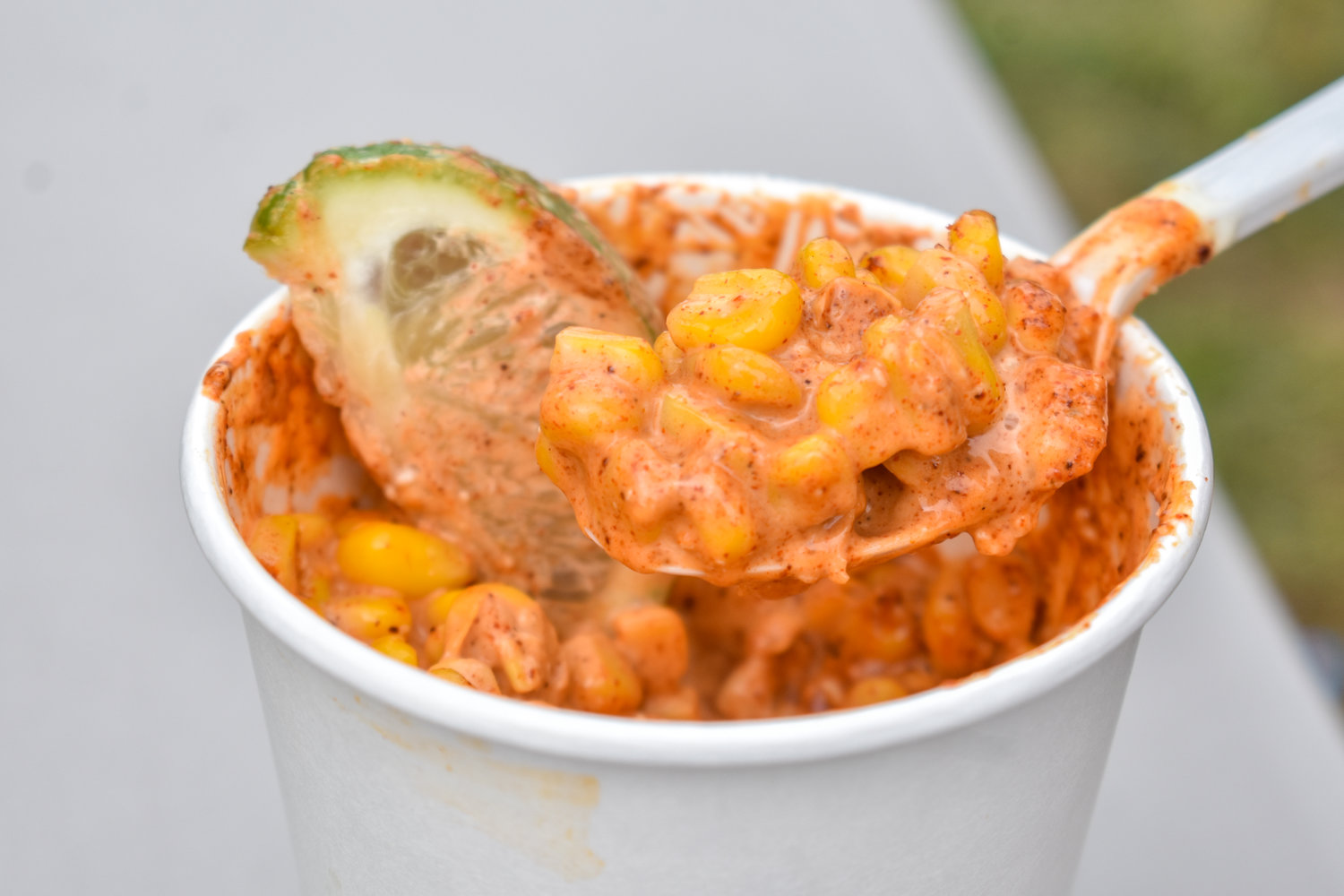 $8 Mexican street corn in a cup at the NYS Fair.
(Sentinel photo by Carly Stone) 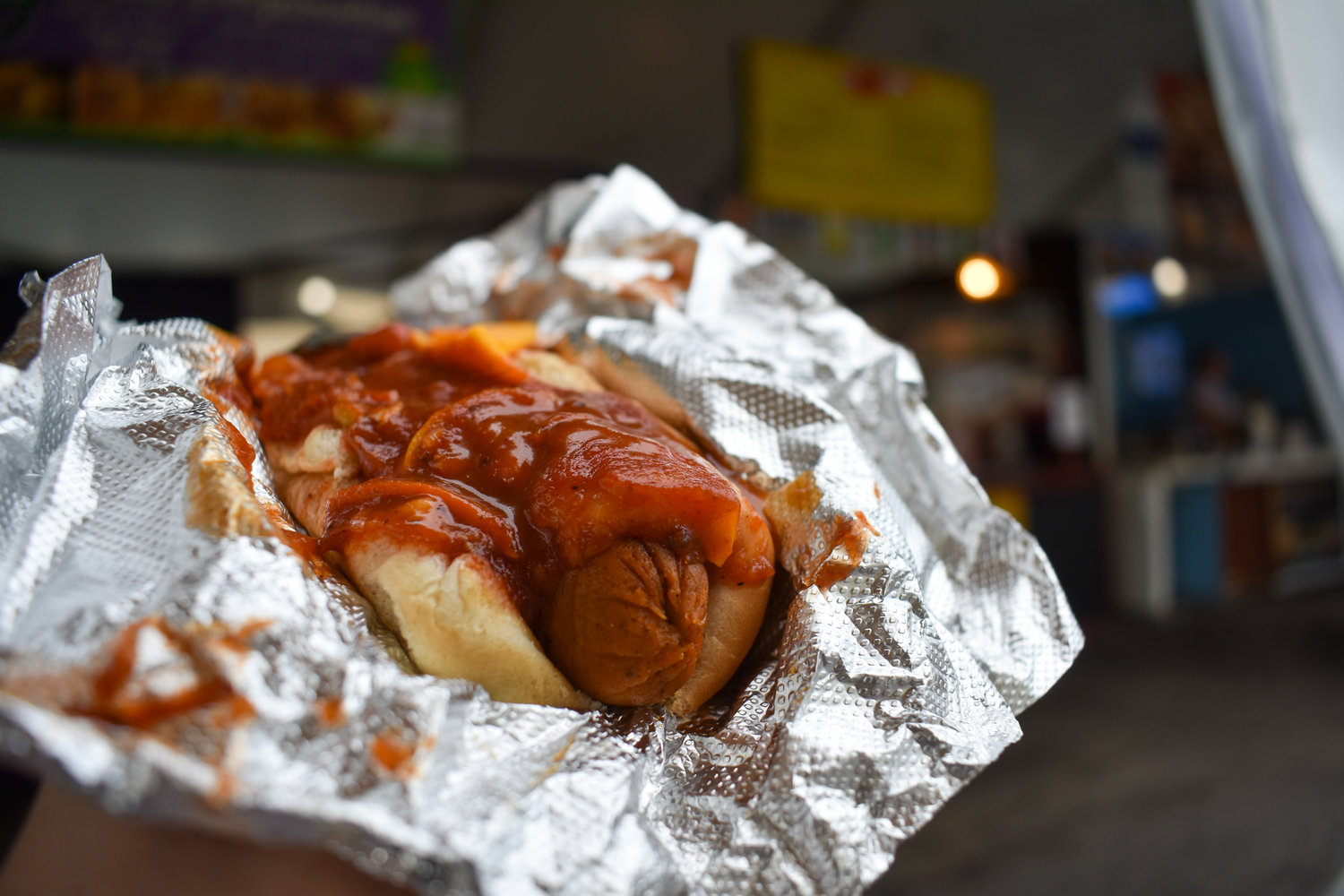 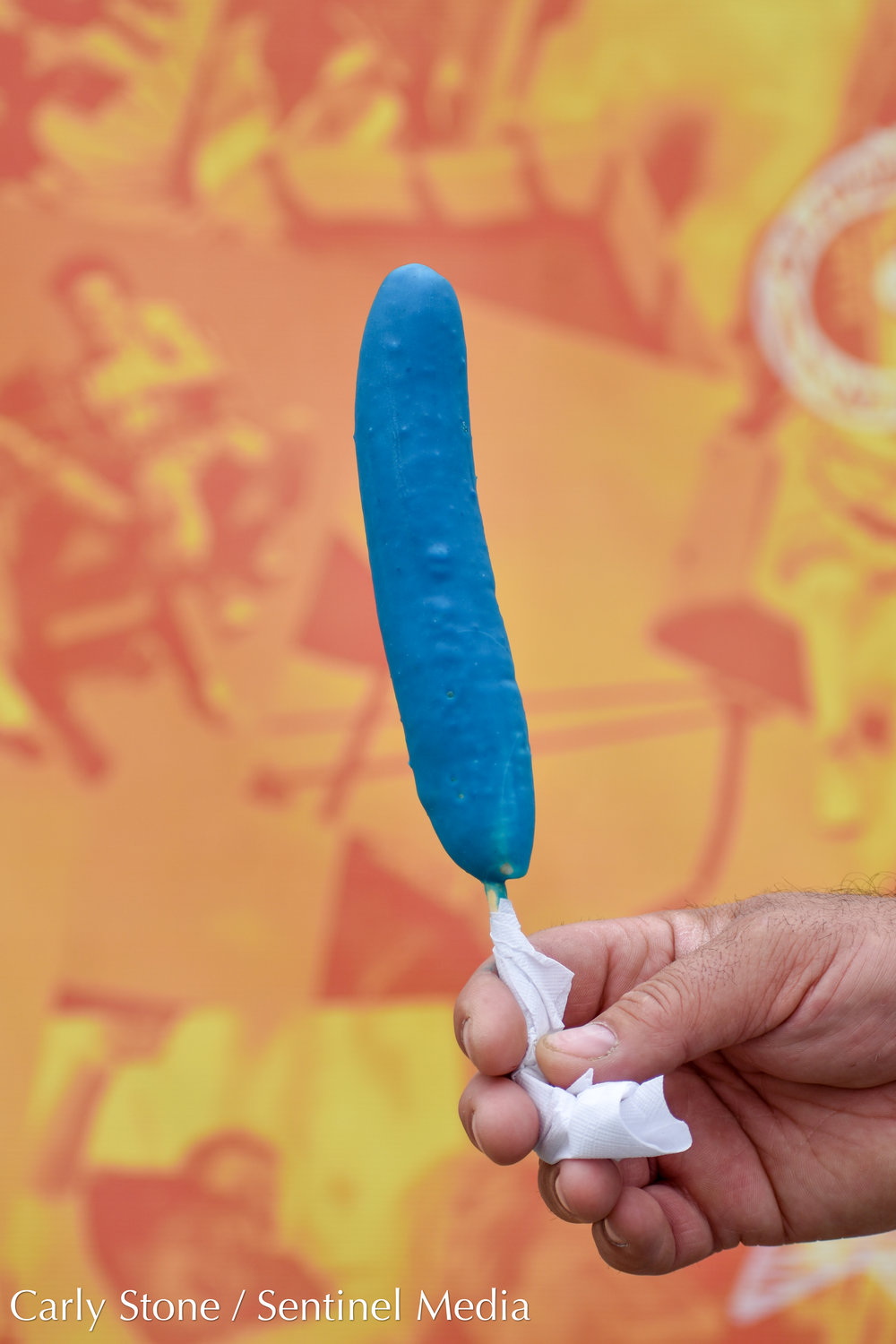 GEDDES — The Great New York State Fair is as much about eating as it is about playing. Here are five fair foods rated by reporter Carly Stone while exploring the grounds on Tuesday. 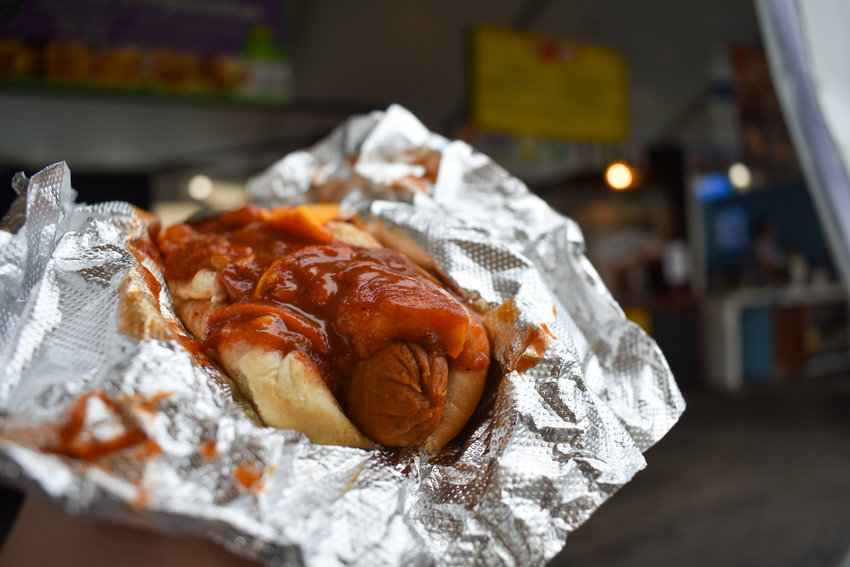 A $5 vegan chili cheese dog from Omanii's Lemonade Heaven at the NYS Fair.

Fairgoers might not have vegan/vegetarian cuisine on the brain, but they should, or else they’ll miss out on this value vegan find at Omanii’s Lemonade Heaven in the Pan-African Village.

The dog is from Trader Joe’s, the cheese, from Good Planet, and the “chili” is a homemade blend of eggplant, peppers, zucchini, onions, and squash sauteed in a sweet red sauce. There are both non-vegan and vegan hot dog buns available.

There’s a smokiness in the “meat” that compliments the sweetness of the sauce, followed by a delectable crunch from the vegetables. The cheese provides a balancing, nutty richness. At $5 per dog, you really can’t go wrong. 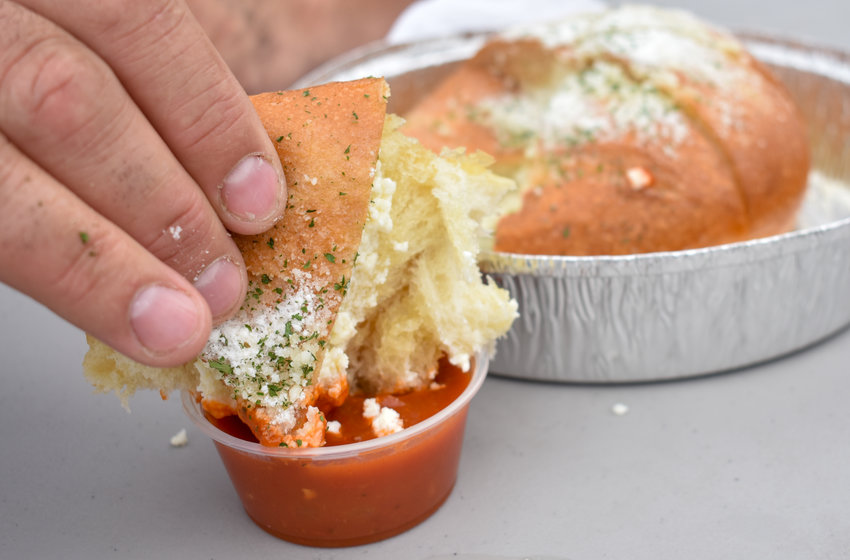 $15 giant garlic bread served by It’s a Utica Thing at the NYS Fair.

What: Giant Garlic Bread, or, “The King”

Where: It’s a Utica Thing

Utica-based restauranteurs have introduced fairgoers to a buttery, cheesy, garlicky, shareable entree that’s worth all the hype. This giant homemade brioche roll is cut six ways and stuffed with whipped, herb-infused ricotta and garlic butter. Then it’s topped with pecorino romano cheese and parsley and served with a side of marinara.

“Why would I get garlic bread at the state fair?,” one might ask. Because if you can get your hands on a roll this big and delicious with quality crunch and flavor carried throughout, you do. Grab a napkin and go all in with a few friends.

It’s A Utica Thing can be found in two different locations in and around restaurant row, with one located behind The Eatery. 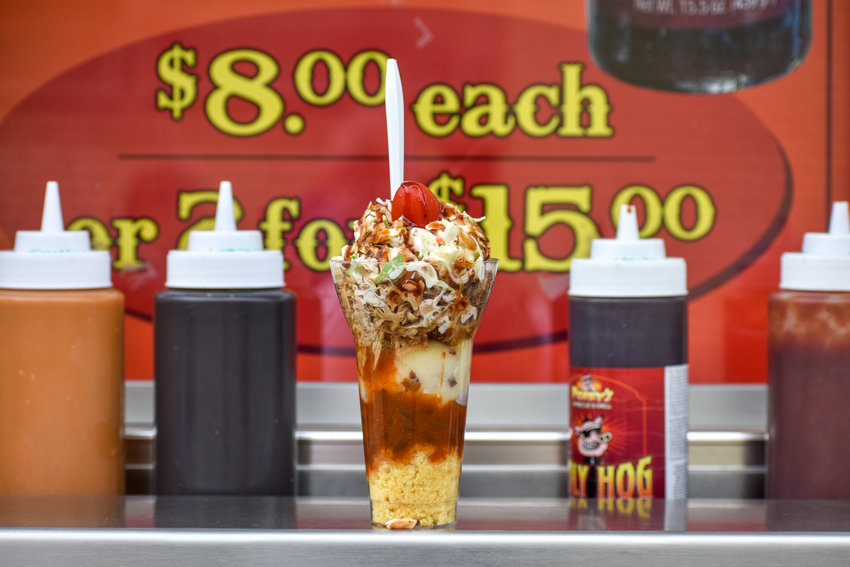 $10 BBQ sundae provided by Porky’s at the NYS Fair.

The NYS Fair already holds the hot beef sundae close. For a cheap price, you can get an average meal you could honestly make at home.

That’s not this BBQ sundae.

Served in a tall clear container showing off a rainbow of mouth-watering layers, Porky’s has taken the hot beef sundae to a whole new level. Starting from the top, you’ll get a cherry tomato atop a bed of sweet, cold, crunchy coleslaw followed by your choice of meat — pulled pork or beef brisket (I did a little bit of both). Next is a layer of garlic mashed potatoes (with skins) smothering a layer of BBQ beans and finally, a cornbread bed.

Each layer of this concoction stands on its own in terms of flavor, but the real treat is getting a new experience with every bite.

Porky’s is located next to the Grange building. 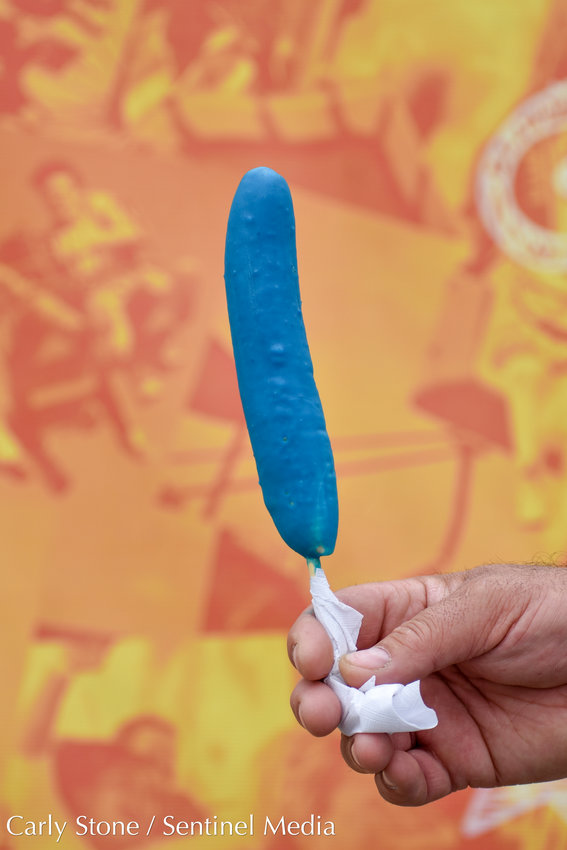 Where: Gio’s Ice cream, and other vendors

Sometimes when you see a giant blue banana, you just have to try it.

There are frozen banana stands sprinkled throughout the fair, with two stands in particular flashing the same bright colors and cow mascot offering the same unique candy fruit coating.

At $8, you’d hope it would be really good, but the blue raspberry variety was only ok. There’s a fake flavoring and texture that was akin to laffy taffy, and beneath that was a just-fine frozen banana, which was refreshing in the fair heat. Surrounded by fried foods and fats on all sides, I was provided a bit of respite by this chilly, “healthy” treat.

This one is bound to be a better hit for the kids. Adult enjoyment may vary. 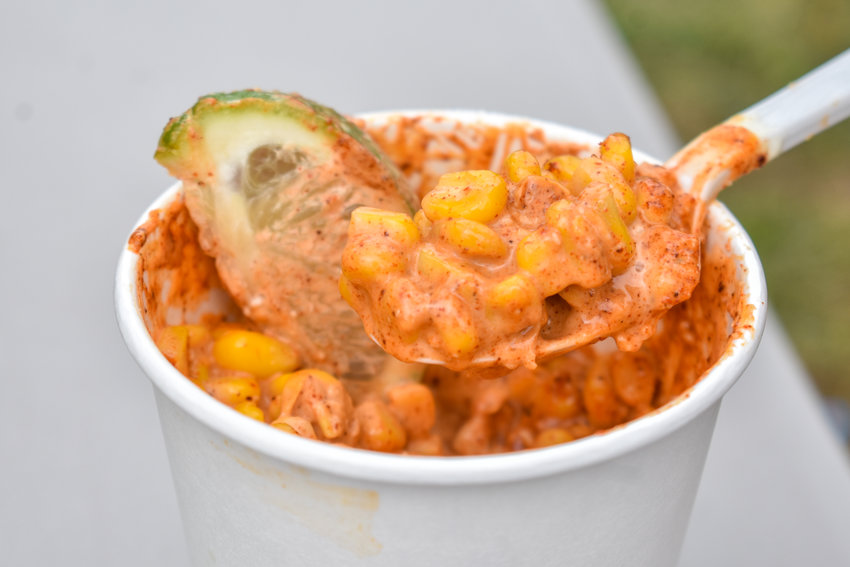 $8 Mexican street corn in a cup at the NYS Fair.

What: Mexican Street Corn in a Cup

The name of the vendor wasn’t clear; all I could remember seeing was a giant banner picturing a cup of Mexican street corn, located around restaurant row. It was hard to miss.

The $8 portion consists of corn, lime, paprika, parmesan cheese, and mayonnaise. I preferred the cup over the go-to style of eating right off the cob since I could avoid getting mayo and cheese dust all over my mouth and cheeks.

The taste was good, though the corn-to-sauce ratio contained too much off the latter.

Pro tip: Try blending two fair foods into one new customized creation. Get the corn in a cup, then find another snack that could use it as a topping, and serve. A $1 hot dog could make a great experiment.