Gorgeous fall foliage expected this weekend across much of state

Beautiful fall colors continue to emerge across New York — with foliage expected to be at or beyond midpoint of change this weekend in parts of several regions.

Gorgeous fall foliage expected this weekend across much of state 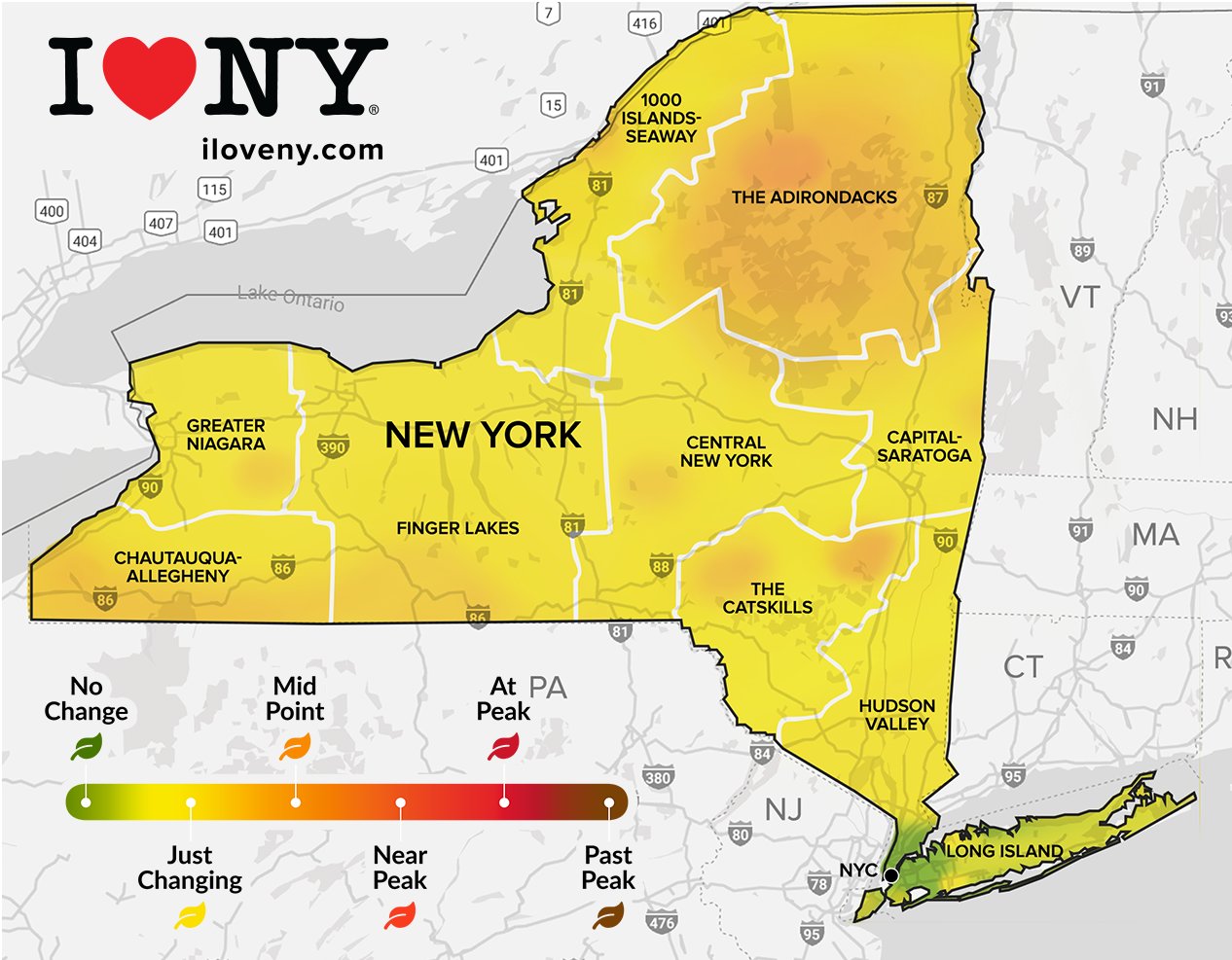 This is the third 2022 I LOVE NY Fall Foliage Report for New York State. Reports are obtained from volunteer field observers and reflect expected color conditions for the coming weekend.

ALBANY — Beautiful fall colors continue to emerge across New York — with foliage expected to be at or beyond midpoint of change this weekend in parts of several regions, most significantly the Adirondacks and Catskills, according to field observers for the Empire State Development Division of Tourism’s I LOVE NY program.

In Herkimer County, Old Forge spotters are predicting foliage at midpoint of change this weekend with 55% color transition and mostly red and orange leaves, along with some emerging yellows.

Leaves may be up to 50% changed in Chenango County this weekend, according to foliage spotters in Norwich, with mostly yellow and red leaves.

In Oneida County, observers in Utica expect about 30% change with average to bright yellow and red leaves emerging. In Montgomery County, Gloversville spotters predict 25% change with yellow and orange leaves appearing. Foliage change is expected to be around 20% in Herkimer County, according to reports from Herkimer, and 20% changed in Otsego County near Cooperstown at Otsego Lake and The Farmers’ Museum.

Foliage change is still in the early stages in Madison County, according to spotters in Hamilton, with about 10% change predicted and featuring emerging orange and yellow hues.

Significant color change will be on display in the Adirondacks where foliage spotters in Tupper Lake and Mt. Arab expect 55-60% color change this weekend with muted to average fall colors of carmine, beet, cranberry, marmalade, marigold, apricot, daffodil, pineapple, banana, amber, and auburn. Recent precipitation seems to have invigorated leaf transition, which is expected to be at midpoint of change.

Foliage should also be at midpoint of change in Saranac Lake, with around 50% leaf transition and a good mix of fall colors including pops of red, orange, and shades of purple. In the northern portion of the county, spotters in Malone predict 30% leaf change with red, orange, and yellow leaves of average brilliance.

Likewise, in the Catskills, Greene County observers reporting from the upper elevations of the towns of Hunter and Windham predict up to 70% change this weekend and a mix of green, yellow, and red leaves of average brilliance. To the east, in Catskill, spotters are expecting about 25% color change with average shades of orange and red.

In Delaware County, reports from the Delhi area are predicting up to 55% change with average to bright shades of yellow and red along the roadways, while hillsides are predominantly green. Foliage in the Bovina area should be more than 35% changed with a nice mix of fall colors, and at least 20% changed around Bloomville.

In the Thousand Islands-Seaway region, Jefferson County foliage spotters from Alexandria Bay expect about 40% change this weekend with average shades of yellow and orange, and some pockets of red.

St. Lawrence County reports from Madrid predict up to 25% change, highlighted by emerging shades of orange, red, and yellow. In Oswego County, observers expect 20% foliage change in Oswego with bright of red and orange leaves.

The I LOVE NY team of volunteer foliage spotters, located throughout the state’s 11 vacation regions, are tasked with keeping track of the color change in their area as leaves progress each week. The information is then used for fall foliage reports, which are posted online each week, featuring a detailed map of color change throughout New York State, vantage points for viewing spectacular foliage and suggested autumn getaways.