Aidan Rubas was supposed to be out for the entire football season with an injury he suffered last spring in baseball. 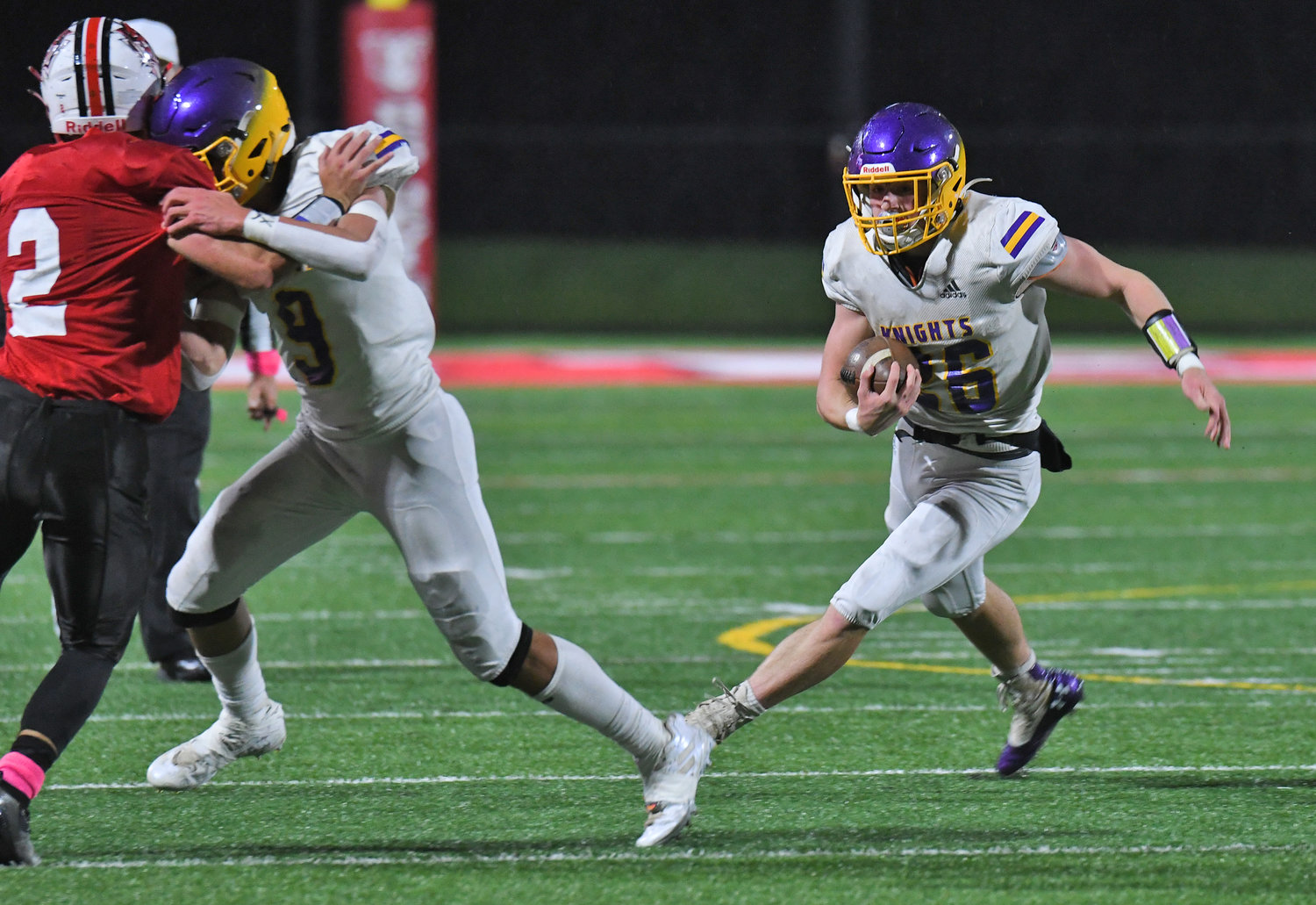 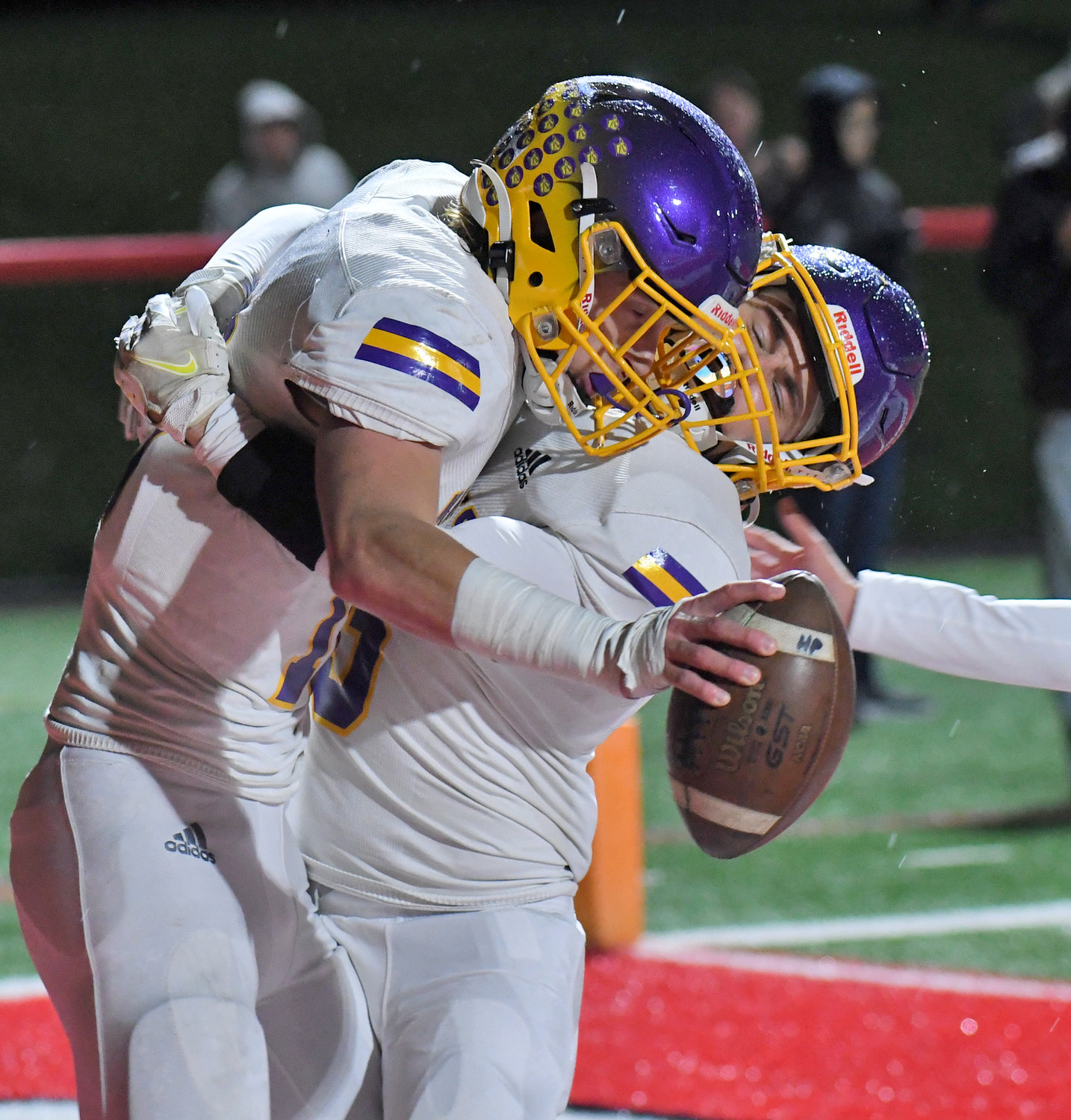 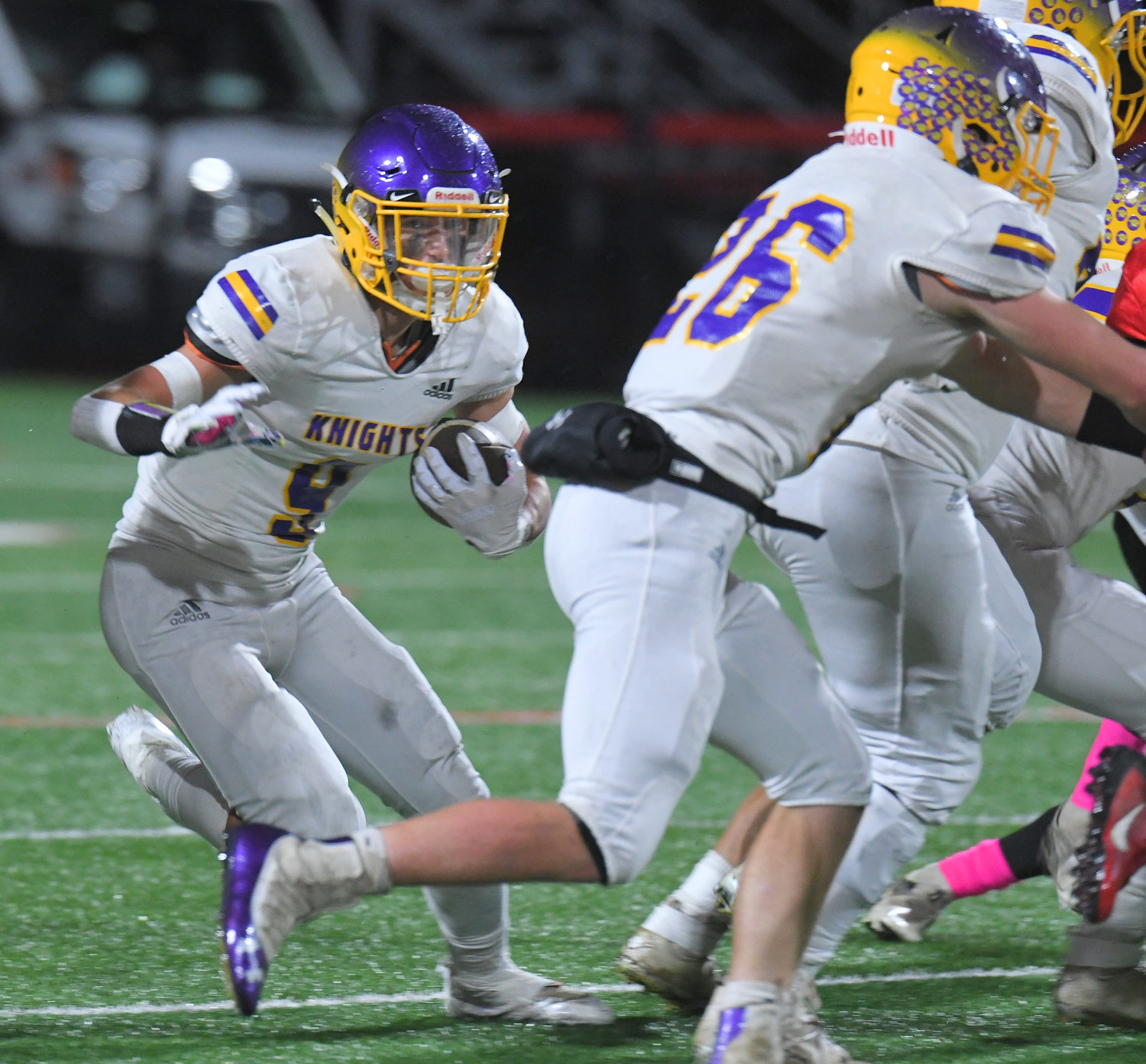 Holland Patent junior running back Nick Acevedo cuts back with senior Jordan Koenig clearing a path in front of him Friday night in a 14-6 road win against Vernon-Verona-Sherrill. Acevedo ran for 71 yards on the night and Koenig had 106.
(Sentinel photo by John Clifford) 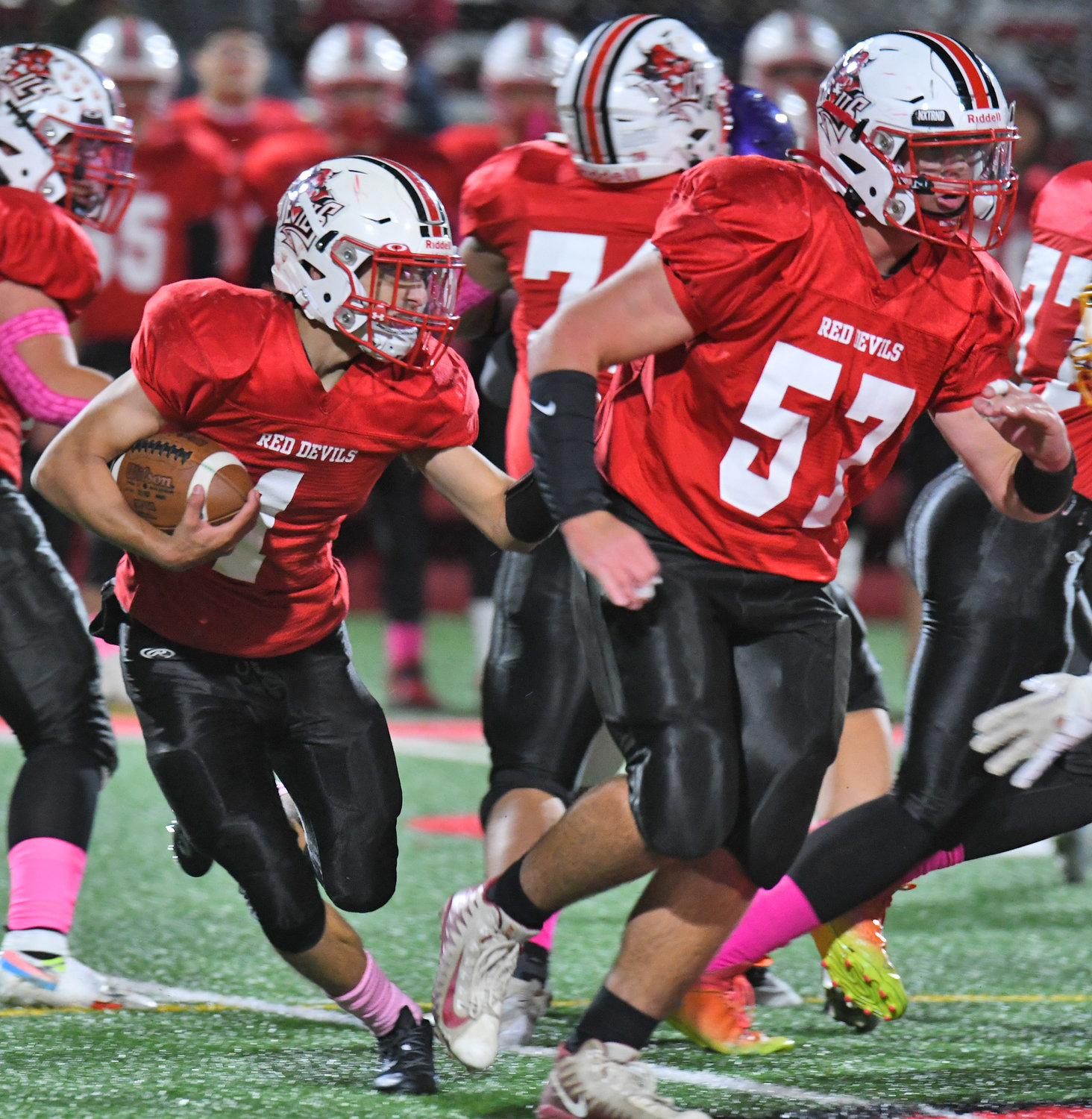 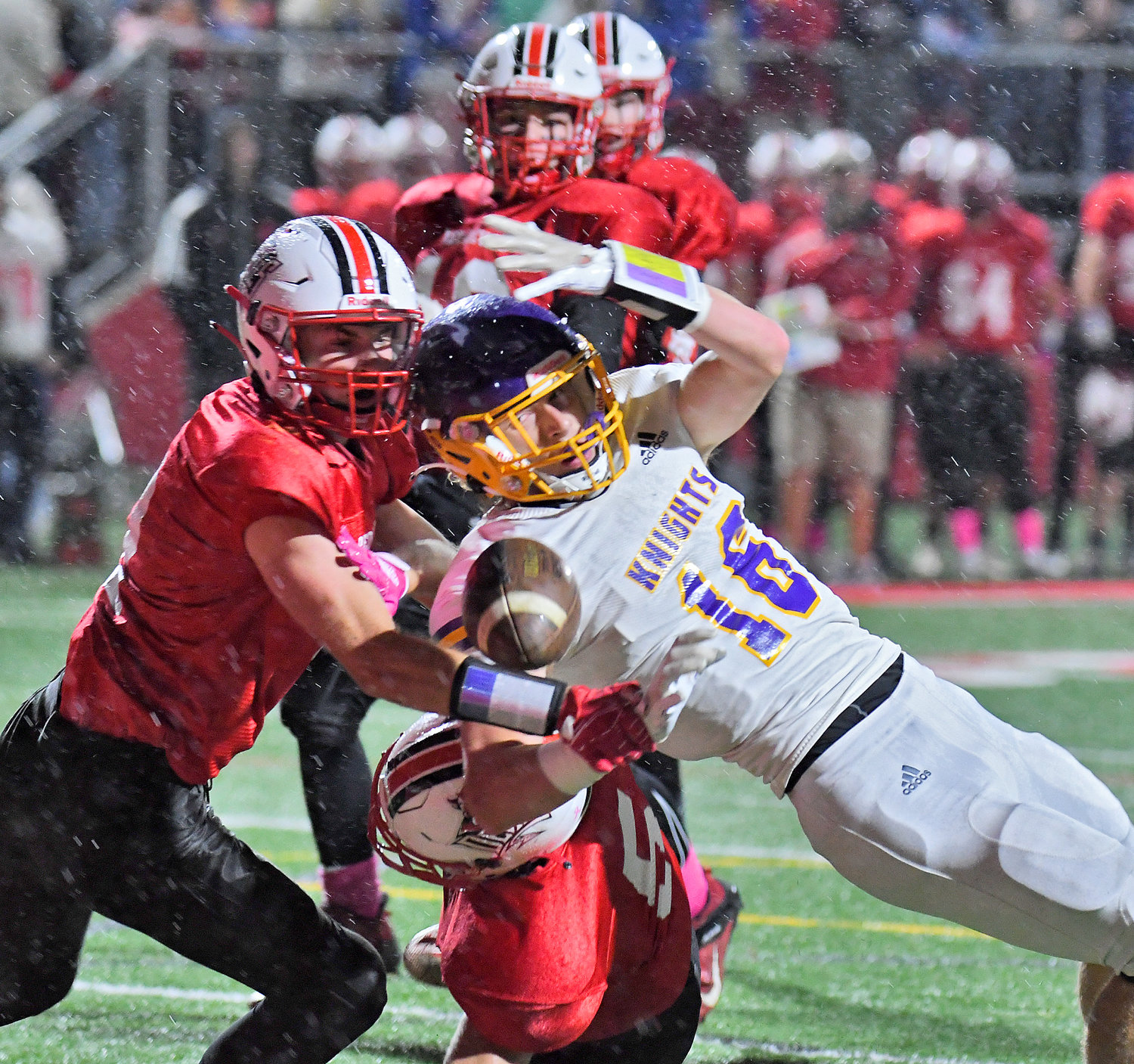 Vernon-Verona-Sherrill defensive backs Tyler Wittmann, left, and Bailey Coufal, center, break up a pass intended for Holland Patent tight end Nick Deforrest in the first quarter at VVS on Friday night. Deforrest caught both of HP's two scores to help the team to a 14-6 win.
(Sentinel photo by John Clifford) 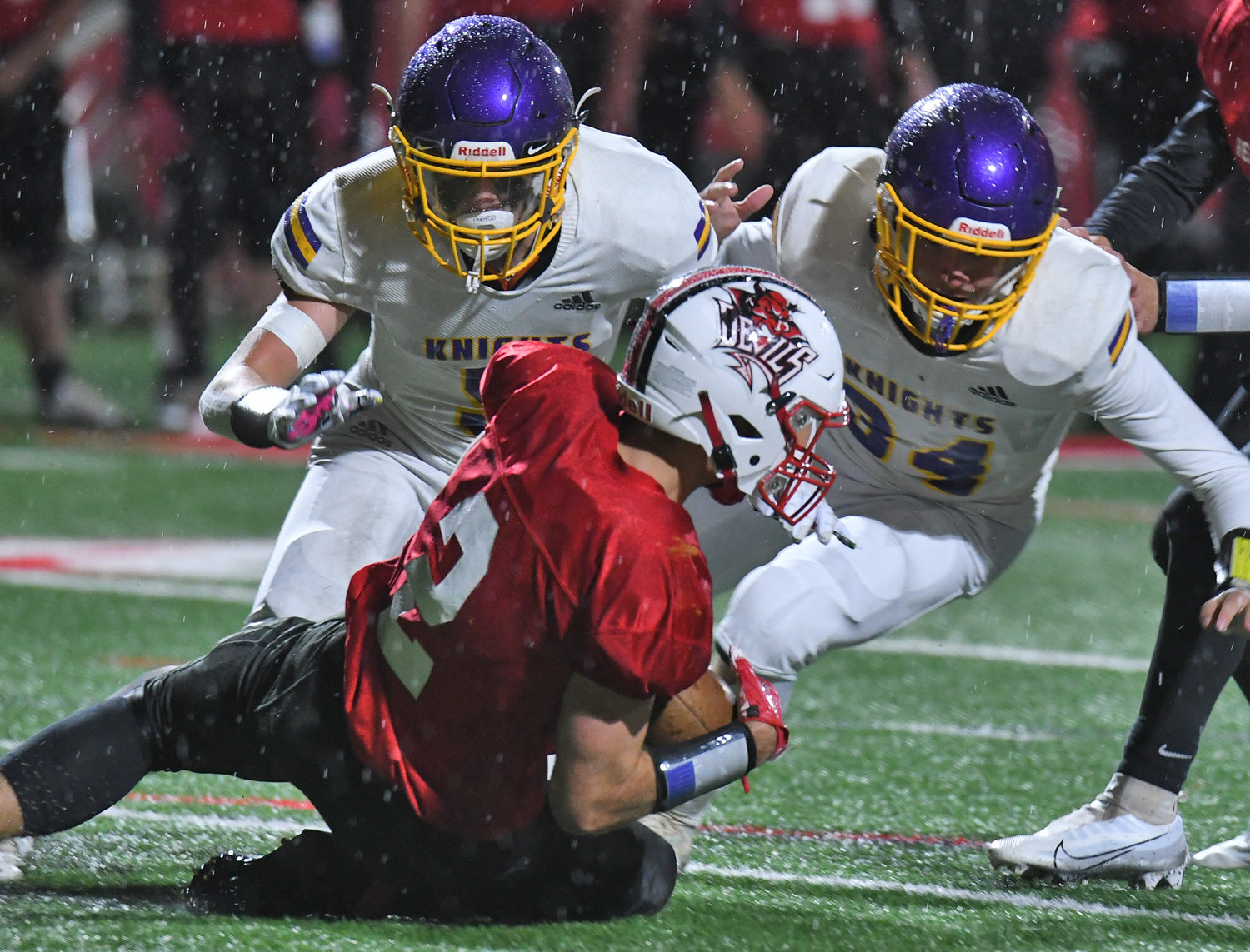 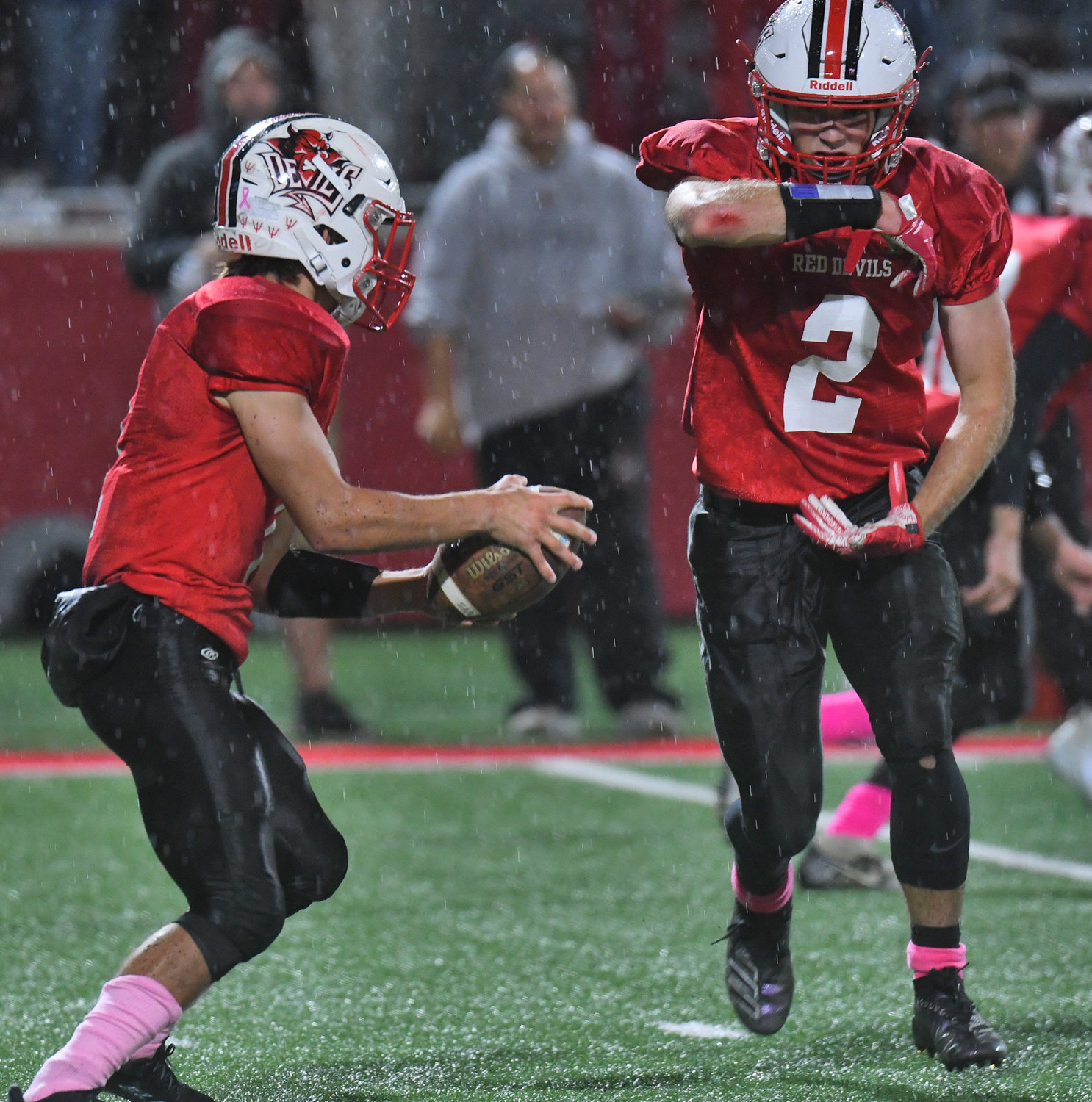 Aiden Rubas was supposed to be out for the entire football season with an injury he suffered last spring in baseball.

Instead he missed Holland Patent's first five games then reclaimed his starting quarterback spot and tossed a pair of touchdowns to Nick Deforrest Friday night to guide the Golden Knights to a 14-6 win against host Vernon-Verona-Sherrill in Class C Division 2.

Rubas, a junior, came on in the second quarter of what was a scoreless game at the time. He eased his way in, mostly handing off to Jordan Koenig and Nick Acevedo before finding Deforrest to cap off his second drive of the game. With 1:18 left in the first half, he piloted the HP offense from its 39, and though it was mostly running plays, he hit Jordan Carhart for 24 then a few plays later found Deforrest wide open in the back of the end zone for a 25-yard TD pass. That put the Knights up 6-0 with 41 seconds left in the half.

"He did very well," said HP head coach Brian Briggs of Rubas after the win. "And I think he'll get better."

HP's other scoring drive came near the end of the third quarter. This time the HP defense stopped the Red Devils on fourth down and took over on the 39 again. Koenig and Acevedo combined for seven runs in a row before Rubas threw a jump ball into the end zone that Deforrest came down with for a 22-yard TD catch. Mike Romeo hit Carhart for a two-point conversion pass and it was 14-0 for the visitors with 25 seconds left in the third quarter.

Rubas ended the game 7-of-16 passing for 99 yards and the two TDs. Deforrest was the top receiver, with three catches for 64 yards and the two scores. Koenig who (started the game at quarterback) piled up 106 yards on 19 carries while Acevedo had 13 rushes for 71 yards.

Acevedo, who has been an impact player at linebacker, has been getting more playing time on offense in his junior year as the team has navigated injuries.

"I just want to do what's best for the team and help out the team," he said after the game. The Knights, he said, continue to rely on senior leadership and experience as well as size. Having Rubas back helps too, he said, adding that he played well in his return.

The VVS rushing attack was virtually all of the offense on the night. James Wheeler IV came into the season projected as a fourth-year starter at tailback. Instead he's taken over as a run-first quarterback. He was 3-for-12 passing for 26 yards but did real damage with his legs. He ran 27 times for 176 yards and the team's lone score, a six-yard carry set up by his own 47-yard scamper to start the drive. It came right after HP's second score and made it 14-6 after 48 seconds of the fourth quarter.

But the HP defense shut down two more VVS drives with fourth down stands to get the win. Koenig and Deforrest led the team in tackles, with seven and four, respectively.

"Once again we played sloppy on offense and on defense we played great," said Briggs. "We're 6-0," he said with a shrug. "A win's a win." He said one key was stopping, or at least containing Wheeler. When he saw openings running up the middle, "we made adjustments and stopped him from there." The linebackers, he said, were the stoppers in the win. "Jordan Koenig played a hell of a game."

Acevedo said the team must continue to eliminate errors and players have to keep doing their assignments to continue the winning ways. "We're adjusting," he said.

Baldwinsville (3-2) jumped out to a 17-0 lead at halftime and then held off visiting Thomas R. Proctor to score the Class AA victory.

Baldwinsville scored each of its three touchdowns through its rushing attack. Nicholas Foster scored from in close in the first quarter and Gregory Marinelli also had a short score in the second. The team added a field goal to build a lead.

In the third quarter, Proctor’s Jerquell Henderson powered in from the 1-yard line for the team’s lone score.

However, Baldwinsville’s Brandon Levin added a 13-yard score in the fourth.

Whitesboro had some costly turnovers in the fourth quarter as Fayetteville-Manlius (6-0) took advantage to remain undefeated in Class A.

Thomas Conley scored the go-ahead touchdown on a 70-yard run to break a 14-all tie in the fourth quarter.

F-M then got second and third touchdown runs from George LaCombe (59 yards and one yard) to pull away.

Whitesboro had an early lead when offensive lineman Matthew Yardley recovered a fumble in the end zone.

Standout junior quarterback Kyle Meier helped tie the game at 14 in the third quarter with a short run for Whitesboro (4-1 Class A, 4-2 overall).

Whitesboro statistics were not available.

The Spartans bounced back with help from their run game.

Westmoreland/Oriskany earned its first win of the season in Class C.

Cameron Rautenstrauch scored a short rushing touchdown in the third quarter to help Westmoreland/Oriskany (1-5). He also added an interception.

Jayden Luton had an interception with 37 seconds left to seal the win against Southern Hills (0-5).

Michael Scalise gave the Bulldogs the lead in the first quarter with a short run. He finished with 90 yards on 19 carries.

The run game played an important part for Little Falls (4-2) in the Class D win.

Brayton Langdon also finished with 199 yards on 12 of 18 passing. He had a touchdown pass to Xavier Dunn.

It is Little Falls' second shutout this season.